Freitag's recycled, Dadaist bags are a word-of-mouth phenomenon that spread through Europe, reached the cool class here, and even hang in the MoMA. 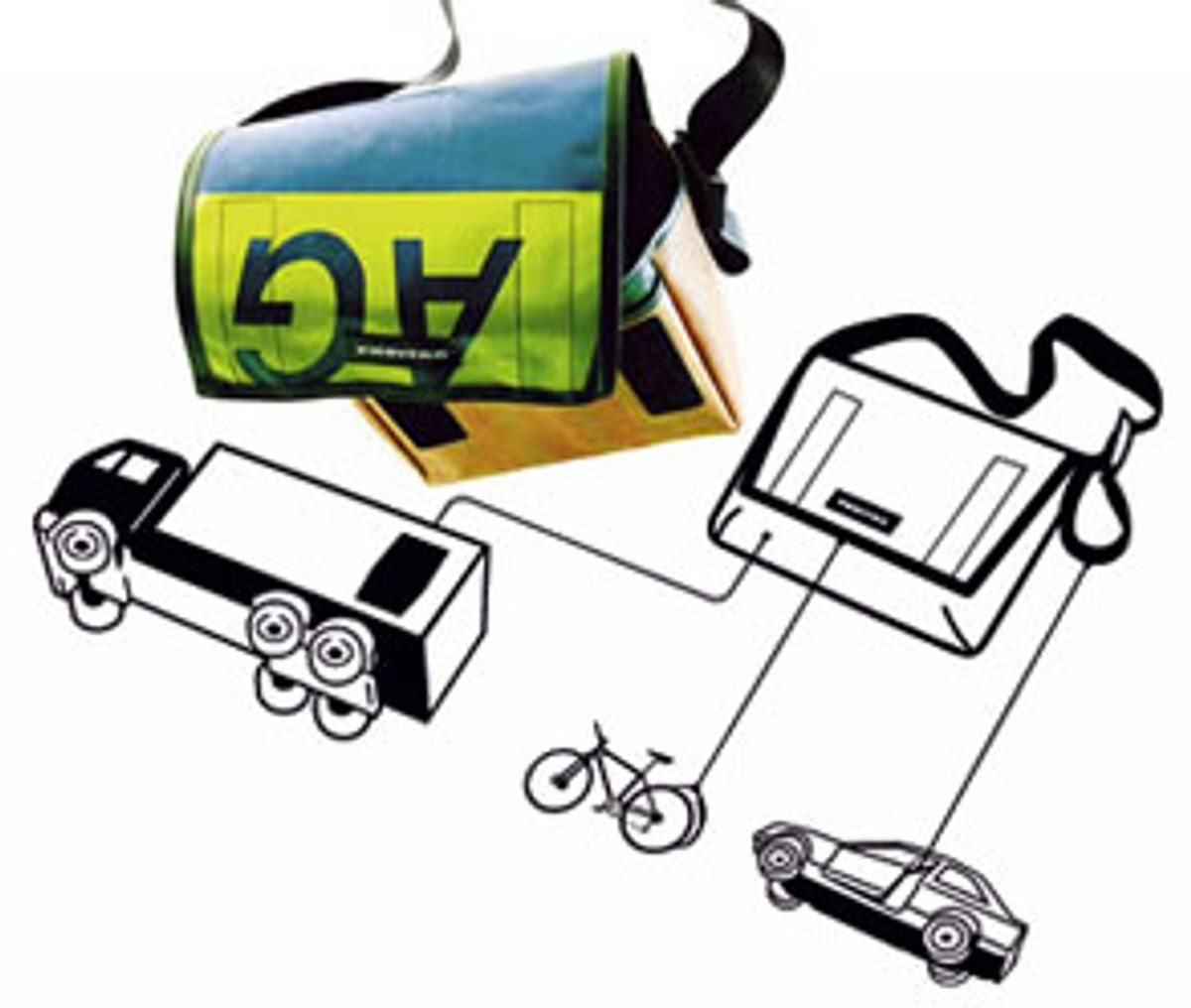 They've started to appear in places like the gallery quarter of Manhattan's West Chelsea and Lower East Side neighborhoods, and in parts of Brooklyn: the bright swirls of color, the obtuse shapes, the inscrutable juxtaposition of letters and numbers. Freitag messenger bags are like bits of pop art; they recall not only the sensibilities of Warhol and Lichtenstein, but the aesthetic of Rothko, Barnett Newman's zip paintings and Ed Ruscha. So much so, in fact, that a Freitag bag now hangs in New York's refurbished Museum of Modern Art, in the design section. That's right: a messenger bag featured not in the Design Shop across 53rd Street, but in the museum's galleries.

The Freitag bags are an incipient trend that one can only hope will never become as ubiquitous as those dowdy bags made by Manhattan Portage, or the multicolored options from San Francisco's Timbuk2, though the MoMA endorsement might make that inevitable. But while still only a subterranean presence here in America -- a couple of handfuls are sold in New York, Los Angeles, Chicago, Miami, Portland, Ore., and San Francisco -- the Swiss brand has made its mark in Europe. In Berlin, the bags can be seen in the uber-hip former East districts like Mitte and Friedrichshain; of the 15 countries where Freitag is sold, Germany, according to the company, is where they are most popular outside of Switzerland. Since the company's inception in 1993, 400,000 have been sold worldwide, an impressive number considering the company began strictly as a word-of-mouth phenomenon and has never, ever advertised.

Why have the bags caught on in Europe but not (yet) here? This is largely because of the different attitudes Europeans and Americans have about the environment. Freitag bags, you see, are made with all recycled materials.

The company was started by Swiss brothers Daniel and Markus Freitag, who both attended the Zurich Institute of Art and Design. The pair took recycled truck tarpaulins, seat belts and bicycle inner tubes -- portable bits of Dada -- and began making messenger bags to cater to cycling enthusiasts, DJs (vinyl records fit snuggly in the large version of the bag), artists and other stylish urban dwellers. The visual appeal is that no two bags would be exactly the same -- they would be made of whatever capricious shapes and color schemes that can come from a truck tarpaulin, or combinations of tarpaulins. (The company's Web site now lets you cut and design your own, with whatever six or seven tarpaulins, or portions of tarpaulins, happen to be available on a given day.)

At first, the brothers made the bags in their apartment and sold them on city streets, in the industrial part of town and outside underground clubs, and the popularity of their creations grew. By 1995, the Freitag brothers made a trip to Berlin and the bags took off there, exactly when that evolving city was developing its reputation for cheap rents and bohemian cool. Today, they're sold in less than 10 spots in the city of Zurich -- one or two nice boutiques, but mainly in street-wear stores and hardcore bike shops, clear of the center of town. The brothers have never had to invest in advertising -- Freitag's clever hook sold itself: The bags are immediately recognizable, but also completely individual.

They are also Green, with a capital G. To spend time in Zurich is to understand how serious the Swiss are about the environment, and that helps explain Freitag's appeal. Recycling is serious business in Switzerland. Unlike here in America, where anything vaguely similar -- glass, aluminum foil, plastic, Tropicana cartons -- is frequently dumped in a plastic garbage can for someone else to sort, the Swiss take it upon themselves to do much of their own leg work. Newspaper, bottles and cans are dropped off in separate locations, often a furlong's length from one's apartment. (In other words, a shlep.) When you're at one of these stations, you deposit -- in large, deep bins -- clear glass with clear glass, green with green, brown with brown (they drink a lot in Switzerland), and aluminum with aluminum. Then there's a slot for your empty paper bags. Garbage is only collected on certain days and will only be picked up in special, and costly, garbage bags. It's all a pain in the ass, frankly, but it's hard to complain. The air, even the city air, is clean; trams and electric buses are used; and the rivers and lakes are perfectly swimmable. Mercer's quality of life survey released this week ranks Geneva and Zurich first and second, with environment a big part of that equation.

It's this sensibility that has made Freitag a hit, and has allowed it to endure the way uber-hip trends aren't supposed to. In Zurich, especially, there's no sense that Freitag is "over," as would be true of an 11-year-old trend in the United States. Freitag has become a lasting emblem of a country that cares about the planet, and especially of the artist-friendly city of Zurich, an often gray city that benefits further from Freitag's splashes of color. Indeed, carrying a recycled truck tarpaulin is a pretty obvious sign that one cares about the environment -- canvas bags wouldn't have the same resonance. But the bag's longevity might also be explained by its ability to endure lots of use -- and abuse. The more weathered it gets, the better it looks --like a pair of jeans or your favorite city walking boot. I own two Freitag bags, one that reads WELLP vertically down the front in pixelated lettering; the other has big white numbers -- O55 -- against a deep blue background. They run from about $120 to $220, depending on the size of the bag, the most popular being the Dragnet, which, at 14 inches across, is the size of a typical briefcase.

The Freitag company has expanded on its original three sizes of messenger bags and now makes backpacks, purses, snowboard bags, wallets and cellphone packs. It still does not advertise. It also makes soccer balls and shopping bags (useful since Swiss supermarkets don't give out shopping bags; you either have to bring your own or buy a paper bag). It's utilitarianism with style. Dada with a purpose.