"You're supposed to marry the person you love, Mom"

My 7-year-old son's best friend is a lesbian and he says he wants to be gay. I hope he is. 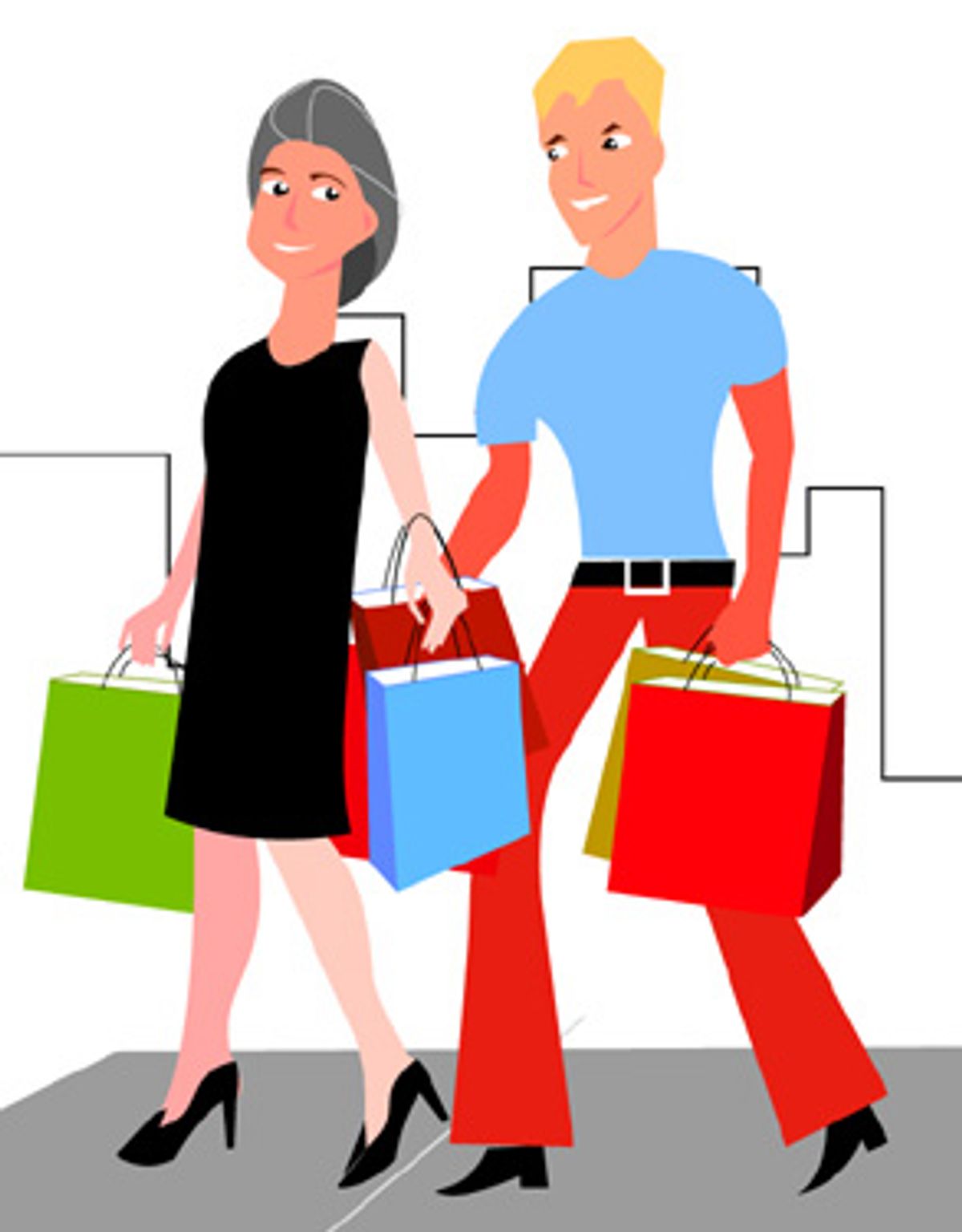 My 7-year-old son's best friend is a 59-year-old lesbian from Brooklyn, N.Y. Zeke and Laura share a passion for the San Francisco Giants, dark chocolate truffles and New York frankfurters, and have spent every Wednesday afternoon together since he was 6 weeks old. Other than his dad, Zeke would rather be with Laura than pretty much anybody else, including me, and who can blame him. He and Laura go to ballgames, take classes at the science museum, do his homework over brownie sundaes at Fenton's ice-cream parlor, and have a circuit of toy stores they visit on a regular basis.

Laura is the perfect companion for a kid, and had she and her partner been a decade younger, they probably would have had a few of their own. In their generation, it wasn't as common for lesbian couples to have children together. Instead, Zeke and his older sister have been the lucky recipients of these women's devoted attentions. We met because Laura was our investment advisor, but while it may be trite, it is no exaggeration to say that Laura and Hedy are now part of our family.

When Zeke was about 2 and half years old, and was starting to make gender distinctions with the broad strokes of a small child -- boys have short hair, girls have long; boys like trucks, girls like dolls -- he categorically refused to let Laura use the ladies' room while out on one of their excursions. Before that day he hadn't much cared where she landed on the gender-identity scale. At that moment, however, with the absolute certainty of a Ptolemaic astronomer asserting that the sun revolves around the Earth, he directed her to a restaurant men's room. What's most amazing about this story is that Laura obliged. She knocked on the door, checked for unsuspecting men at the urinal and peed in a stall.

A couple of months ago Zeke was telling me about how all the boys in his class had a crush on a particular girl, how it was distracting them from more important activities like reenacting scenes from "The Incredibles," playing 4-Square and assembling Z-cards. I asked him if he also had a crush on this little girl. He wrinkled his brow, thinking about it for a moment. "Nah," he said, finally. "I think I might be gay." Easily, confidently, with no trace of self-consciousness or embarrassment.

I wonder how long it will last? This blissful tolerance of his feels so fragile, even in a city like Berkeley, Calif., where anti-discrimination language is codified, where there are many gay and lesbian families, where his best friend is a middle-aged lesbian. The pressures on boys in particular are manifold. Will it be long before I hear him say, "That's so gay," or call one of his friends "queer"? Will society's demand that people have a specific and recognizable gender identity, which already caused Zeke to push Laura into the wrong bathroom, one day make him uncomfortable with their friendship? I hope not, but I worry. I worry that the world will change him, that it will impose its ugliness on him. I imagine that the people who are busy teaching their kids that God is a man who wants gay people to suffer probably feel the same way as I do, like they're fighting off barbarians.

When Zeke and his older sister were smaller we referred to Hedy, Laura's partner of 19 years, as her "wife." There seemed no other way to describe that relationship in terms the kids could understand, in a way that would align this romance with the other long-term commitments the children knew -- our marriage, those of their grandparents -- and distinguish it from more transient ones. Laura and Hedy were certainly more than "girlfriends," and even the word "partner" wasn't strong enough. We wanted the children to understand that this couple was a constant, dependable part of our lives, and the language of marriage was the easiest way to express that. After all, if Laura and Hedy could have married, they would have.

On Feb. 12, 2004, San Francisco Mayor Gavin Newsom began issuing marriage licenses to gay couples, and by then the children were old enough to understand both homophobia and the pride of standing up to it. We explained that until now no one had ever allowed gay people to be legally married in the United States, and that this was a revolutionary moment, one that we could be excited about and proud of. But the California Supreme Court put a stop to Mayor Newsom's revolution, and confused the hell out of my kids. They didn't understand how anyone could object to what seemed so natural -- people who loved each other getting married. What could possibly be wrong with that?

The court didn't issue a decision on the issue of gay marriage; it merely stopped the weddings while the lawsuits progressed. Now, finally, we have the first court ruling on the issue here in California, and it's once again grounds for cautious celebration. Last week, California Superior Court Judge Richard Kramer ruled that banning gay marriage violates the state constitution. There is of course no guarantee that the California appellate courts will uphold this decision, even in this bluest of blue states. But the California courts may well follow Massachusetts' lead and legalize gay marriage. There are similar lawsuits seeking marriage for same-sex couples pending in Connecticut, Maryland, New Jersey, New York, Oregon and Washington. Just as in Massachusetts, all of these cases are based on individual state constitutions, and all of them have at least a fair chance of success.

The religious right wants us to believe that if one more state does what Massachusetts did and opens its marriage rolls to gays and lesbians, there will be a mighty conservative backlash. They will rise up and pass a federal constitutional amendment banning gay marriage. They have already managed to amend 17 state constitutions to do so. However, James Esseks, litigation director of the ACLU's Lesbian and Gay Rights Project, tells me that he's less worried about state constitutional cases inspiring this kind of conservative reaction than about federal courts doing so. Though a loss in federal court might be a setback, a win would be even worse. A federal court decision against marriage for gay people would, essentially, result in the continuation of the status quo. A decision declaring marriage, as currently defined, to be a violation of the equal-protection rights of gay people could well be a pyrrhic victory. In the unlikely event that a federal court tells Congress that the U.S. Constitution requires gay marriage, Congress will certainly act to amend the Constitution.

It is in part because of my son and his generation that the fanatical right is so caught up in this idea of a constitutional amendment banning gay marriage to begin with. The Hamilton College Youth Opinion Poll surveyed graduating high school seniors in 2001 about their attitudes on gay issues. Two-thirds of them supported gay marriage, as compared with only one-third of adults. This generational shift has been consistent over the years, and there is no reason to think that my son and his friends in the open-minded majority won't continue to increase in number. Certainly, the Traditional Values Coalition is convinced that they will. That's why the foes of equality are so eager to change the Constitution to protect their narrow-minded agenda.

Still, even as things change, I worry that tolerance is not as inevitable as we hope and as they fear. Zeke is already embarrassed about the photographs I took of him as a toddler in the little pink nightie-and-peignoir set we bought him because he was jealous of his older sister's. Despite his easy acceptance of gay people and even the possibility of being gay, he would sooner be caught naked in the classroom than be seen playing with one of his little sister's baby dolls. And even our most broad-minded relatives and friends would get a little uncomfortable when they saw him decked out in full Divine regalia. It is worse when I explain that I hope Zeke is gay. Think about it, I say. How many straight men maintain inappropriately intimate relationships with their mothers? How many shop with them? I want a gay son. People laugh, but they assume I'm kidding. I'm not.

I insist just as adamantly that I do not care if one or both of my daughters are gay. But in thinking about this issue, in writing about it, I have discovered something about myself, something that embarrasses me and makes me wonder about the pervasiveness of intolerance. I would support a gay daughter, I would embrace her, but even though I went through my own senior-year-of-college lesbian phase (I went to Wesleyan University; it was a graduation requirement), I have some discomfort with the prospect. Again, it's easy to joke about it. Would a lesbian daughter give me grief about shaving my legs? Would her girlfriend the Gestalt therapist bring bulgur salad to family potlucks? Both these jokes and the ones I make about my gay son redecorating my family room have as their core a kind of stereotyping. A prejudice. The stereotypical gay man is someone whose company I enjoy, someone who makes me laugh, someone I'd want my kid to be. The stereotypical gay woman makes me insecure, conscious of my failings as a feminist. I make less money than my husband; I rely on him for simple home repairs; I care too much about what I look like; I once got a Brazilian bikini wax.

But like all biases, mine are shopworn and musty clichés that have everything to do with my own insecurities and nothing to do with actual people. None of the gay men and women I know and love fit precisely into these categories. I worry that, just as under my own proud tolerance there lurks a kernel of unease, Zeke's easygoing broad-mindedness will fall victim to the world. But perhaps I'm not giving him and his generation enough credit. Maybe none of them will use words like "gay" and "faggot" as schoolyard barbs, or maybe some of them will react with anger if others do. After all, Zeke says you're supposed to marry the person you love, whoever and whatever that person happens to be. He says it's no big deal.

I hope so. I hope they are better than we are. I think they might be. When he came down to breakfast and saw the San Francisco Chronicle with its banner headline "Judge Strikes Down Ban on Gay Marriage," Zeke thrust his fists into the air over his head and cheered, just like he does when Barry Bonds knocks the go-ahead run out of the park and into the waters of San Francisco Bay.