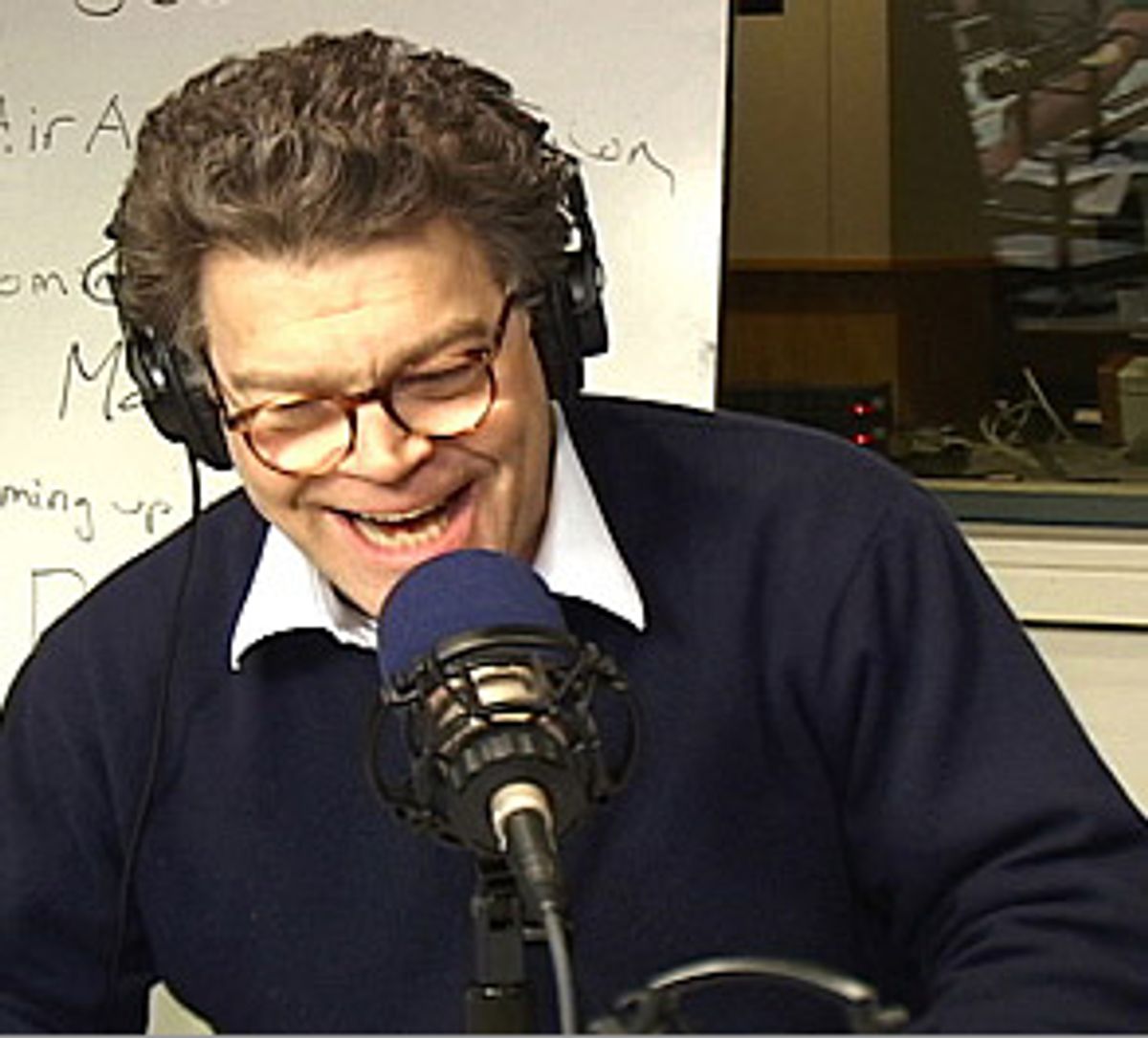 "'Those who are half in love with death will only become more red-fanged and ravenous!'"

Al Franken is doing an interpretive reading of Peggy Noonan's latest column in the Wall Street Journal, this one on -- what else? -- Terri Schiavo. On this recent afternoon broadcast of "The Al Franken Show," Franken's gravelly voice, which slips into that almost lispy Stuart Smalley territory occasionally, sounds absolutely grave and turgid with rage.

"OK, so this means that anyone who believes in the right of a spouse to decide the fate of his wife, a wife who's in a persistent vegetative state ... anyone who believes that is now half in love with death, red-fanged and ravenous? Peggy, screw you."

Welcome to Air America Radio, the left's answer to the conservative talk radio programs that have dominated the dial since the Clinton years. In the early days, Rush Limbaugh brayed like a lone lunatic in the wilderness about the gays and the lefties, but now countless others have joined him in a high-strung chorus of reactionary outbursts and self-righteous indignation, decrying the godless, the abortionists and the terrorists in one fell swoop as millions tune in each day. Fed up with those caustic tirades, which have helped to galvanize the right, a scrappy band of devil-may-care liberals joined together last year to provide an equally ungracious mouthpiece for those angry over the war, disgusted with the president's arrogance and deceit, and apprehensive about the turning sociocultural tides. One year ago, on March 31, 2004, this ragtag group of rebels triumphantly took to the airwaves and finally gave voice to the discontents of the liberal populace. Cut to high fives, hip-hip hoorays, popping of champagne corks, etc.

At least, that's the way you'd imagine the story might go. But HBO's documentary "Left of the Dial" (Thursday, March 31, at 8 p.m. EST) paints a very different picture of the first few weeks of Air America Radio. Filmmakers Kate O'Callaghan and Patrick Farrelly not only got remarkable access to the Air America offices but also found themselves documenting what looked to be the premature death of the company within a few weeks of its birth.

At first, hopes were high -- maybe even a little too high, given the assembled personalities' lack of experience in radio. "It's about time that we did this," Franken tells someone over the phone, presumably a reporter. "As I was writing my book 'Lies and the Lying Liars Who Tell Them: A Fair and Balanced Look at the Right,' I was getting angrier and angrier and at a certain point said, Well, what are you gonna do about it?"

Franken and the rest are certainly charged up and ready to take action, but early rehearsals appear awkward and strained, and technical difficulties abound. Comedian Marc Maron wonders out loud how good he'll be at hosting a radio show, "Morning Sedition." "I've always spoken my mind, I've always been somewhat of a reactionary person -- not always for the right reason," he tells the camera, explaining his issues. "Just ... authority problems. But if you focus those, it looks a lot like ideological revolution!" he adds with a laugh, summing up the tar pit of talk radio on both sides of the dial.

When Franken appears on the cover of the New York Times Magazine, everyone in the office gets excited and clamors to read the article. Still, the most prominent radio talent, Randi Rhodes, who was a popular South Florida radio personality for years before relocating to New York to join Air America, is never pictured and rarely mentioned, as reporters are more drawn to familiar names like Janeane Garofalo and Chuck D. After Michael Moore appears on the "Al Franken Show," Rhodes goes to meet him in the hallway and he not only doesn't appear to know who she is, but tries to avoid her before he spots the camera, at which point he walks back down the hallway to shake her hand.

Minutes later, then-CEO Mark Walsh introduces himself to Moore, and Moore mumbles a hello. Then, as Moore enters the elevator to leave, he snaps, "That thing you said in the Times, comparing me to Michael Savage? That was kind of shitty, I thought. It was offensive, I thought." The elevator door closes. "It's guys like him, that's why this network won't survive, if he has that attitude," Moore says to those within earshot. "'We can't go too far! Gotta play it safe!' Playing it safe is what got us into this mess."

Yet Air America doesn't seem to be playing it safe enough. After a company check bounces and affiliates in Los Angeles and Chicago go unpaid, the network is taken off the air in those markets. Panicked employees are shown discovering this on "The Drudge Report," but co-founder Evan Cohen insists that the checks didn't actually bounce, telling the Chicago Tribune that the affiliates' allegations are an "outright lie."

It's tough to take Cohen at his word, since we appear to catch him lying as the cameras roll. After the New York Times calls to ask about ad sales, Cohen finds out from a sales executive at the company that they've made $639,000, pushing $650,000. Instead of repeating the numbers, Cohen turns around and tells a reporter on the phone, "We're one million dollars in sold advertising as of today. That's a fact, a documentable fact."

Despite Cohen's assertions of financial health, the company is teetering on the edge of financial collapse, and tensions are palpable. Cohen stops showing up for work. Later, those remaining discover that Cohen claimed that the company had money that simply wasn't in the coffers. While Cohen seems to assert that he did nothing wrong, even his close friend from college (who brought Cohen into the company in the first place), company lawyer David Goodfriend, admits to having been duped.

"What a fucking mess," executive producer Carl Ginsburg says to a vendor over the phone. "I know that we owe a few million dollars, that nobody was paid -- I mean nobody -- that we defaulted on a good chunk of the payroll." Ginsburg wearily leans back in his chair and rubs his eyes. "There's just a lot of suspicion, and our vendors, as you can imagine, yourself included, are, I think, shocked because we made public pronouncements about two years of money."

"Come on, everybody found out today that whatever deals they had, they're gone," Rhodes tells the filmmakers in the hallway. "I'm in debt. And I've never been in debt my whole life, even when I was poor, because no one said, 'Go ahead and charge this, and we'll pay for it.'"

By the end of the film, though, those who stuck it out through this dark period begin to look like the triumphant rebels you imagined at the outset. One of the company's investors, Doug Kreeger, steps up to the plate and finds new sources of funding for the network. Today, Air America Radio has 51 affiliate stations and is said to be financially stable. Franken, Garofalo, Rhodes and Maron are continuing to broadcast, and Jerry Springer recently signed on to bring his current radio show to the network.

But nice as it may be to cheer the radio revolutionaries on to a hard-fought victory, are they really doing any more than adding some left-wing noise to the reactionary echo chamber, a battleground inhabited by red-fanged and ravenous loudmouths looking to pass off their issues with authority as ideological revolution?

Only a trip through the airwaves will tell. On Air America Radio, everyone's talking, once again, about Terri Schiavo: Marc Maron talks to philosopher Peter Singer about American misconceptions about death, Al Franken discusses the role of judges in the Schiavo case with Slate editor Dahlia Lithwick, and Randi Rhodes explains the details of the latest emergency petition to reopen the Schiavo case.

And how about the conservative shows? On Sean Hannity's right-wing talk show, a caller from California suggests that someone could simply offer Schiavo a glass of water, or a glass of "liquid nutrition," and if she were to reach out and grab it, then that would demonstrate that she truly does want to live. "Is that something that they could pursue further legally?" she asks. Sweet Jesus. Does the caller think Schiavo is just mildly incapacitated?

We wait for Hannity to set her straight. Instead, he tells her that there are "state police standing, literally, right over them" keeping anyone from offering Schiavo a nice, refreshing drink.

Sort of makes you glad those ragtag rebels made it through the hard times, doesn't it? Happy birthday, Air America!