Will the GOP need life support?

A prominent conservative blogger says Republican leaders have abandoned the traditional principles of small government and federalism -- and warns they may soon come to regret it. 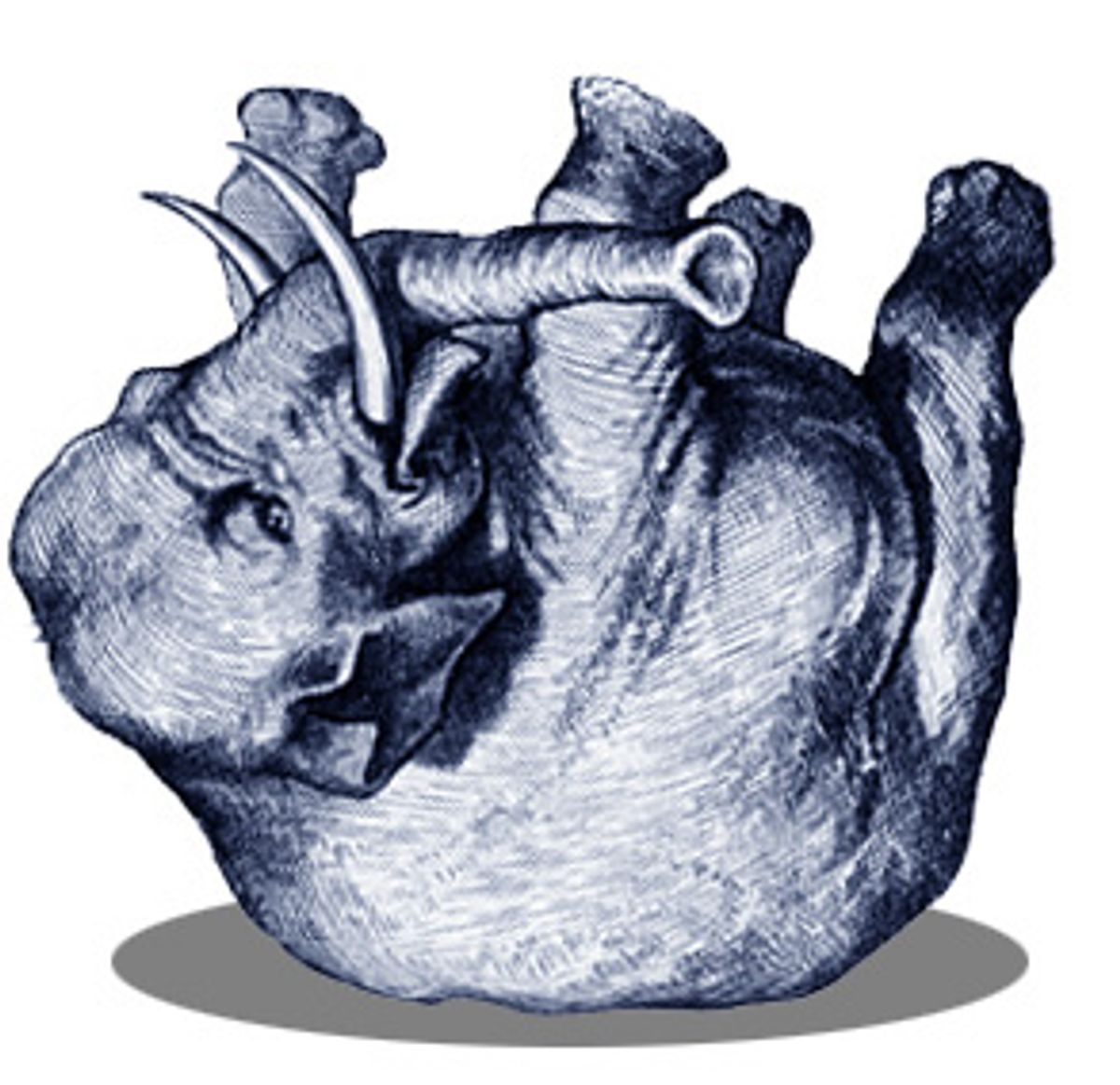 The story of Terri Schiavo, who died Thursday at age 41, is a tragedy in the truest sense. It is a case in which there are no happy endings and in which the mighty fall. One thing that has fallen is the notion of the Republican Party as a bastion of federalism and limited government. Some might argue that this notion was already in doubt, in light of the Bush administration's less-than-parsimonious budgeting, but pork is part of politics, and you have to expect a certain amount of give in that department.

Widespread Republican support for legislation taking an individual case away from state judges and placing it in front of the federal judiciary is another thing. The "if it saves just one life, it's worth it" argument has more typically been associated with gun-control activists, and other groups that are generally looked down upon by Republicans, but now many in the GOP seem to have picked it up as a slogan. Indeed, the entire notion of the "rule of law" -- itself once a favored slogan of conservatives -- seems to have fallen into disrepute. Quite a few conservatives are unhappy about that state of affairs, and I wonder if it doesn't presage a realignment within the Republican Party, and the fracturing of some alliances on the right.

Schiavo hysteria certainly has some Republicans in its grip. Bill Bennett wrote that state law doesn't deserve our respect if it conflicts with natural law. Bennett went on to urge Florida Gov. Jeb Bush to risk impeachment by violating the orders of the Florida Supreme Court. Fox News' John Gibson was less measured. "Just to burnish my reputation as a bomb thrower," he wrote last Friday on the Fox News Web site, "I think Jeb Bush should give serious thought to storming the Bastille." In other words, Bush should consider sending police in to remove Schiavo from the hospice and reattach her feeding tube. "The point is, the temple of the law is so sacrosanct that an occasional chief executive cannot flaunt it once in a while, sort of drop his drawers on the courthouse steps and moon the judges, as a way to protest the complete disregard courts and judges have shown here, in this case, for facts outside the law," Gibson wrote.

Judge bashing has been a staple of Republican rhetoric for a while, though the judges being bashed have more often been federal than state judges. And, to be fair, the judges have often been generous in providing ammunition, offering rulings that strain the facts or go beyond settled law, though that doesn't appear to be the case here. In fact, the courts seem to have been very thorough, and hardly liberal activists. (Florida law blogger Matt Conigliaro notes that Pinellas-Pasco Circuit Judge George Greer, the trial judge, is a Republican and a Southern Baptist.) Some people on the right are pointing that out and are appalled at their colleagues' rhetoric. Daniel Henninger wrote in the Wall Street Journal that while Greer has ruled against Terri Schiavo's parents many times, so have Florida's appeals court, the Florida Supreme Court, U.S. federal courts and the U.S. Supreme Court. "It is difficult for me to believe that these are all 'liberal' judges intent on 'killing' Terri Schiavo," Henninger wrote.

But the judge bashing has gone on, and Congress' rush to pass legislation intervening in the case was unprecedented. This is too much for some conservatives, and quite a few libertarian fellow-travelers such as myself. As Nashville Christian-conservative blogger Bill Hobbs wrote, "I have not written about the Terri Schiavo case because it is too complex, too multi-layered, and too steeped in unknown or unknowable facts for me -- indeed for most people -- to have a fully informed opinion ... I do know that the Congress did the wrong thing, intervened where it had no Constitutional right, and solved nothing."

Donald Sensing, a pro-Bush, pro-war Methodist pastor and Army veteran, agreed and added: "As a resident of Tennessee, I have no standing to tell the people of Florida that their laws are either unjust or incorrectly applied by their state courts. I may believe that, or not, but I have no standing to intervene in the internal affairs of another state by means of the federal government. The notoriety of the Terri Schiavo case does not give me that justification. Like former Reagan Solicitor General Charles Fried (who called the Schiavo legislation an "absurd departure from principles of federalism and respect for sound and orderly judicial administration"), Sensing quoted Justice Scalia from the very similar <a target="_blank" href=http://caselaw.lp.findlaw.com/scripts/getcase.pl?court=US&vol=497&invol=261 Cruzan case, to the effect that this is a matter for state courts.

What's surprising isn't that some people on the right are making these arguments, but that so many are not. One of the defining characteristics of conservatism, I thought, was a belief that one didn't know all the answers. And what about all that talk of federalism and limited government? The gist of the complaint here is that Florida has a bad law, and that Terri Schiavo made a bad marriage, neither of which are normally seen as grounds for congressional action. As Sensing suggests, notoriety seems to be playing a bigger role than morality, much less constitutionality.

Even if it's constitutional for Congress to act on individual cases when it doesn't like the outcome in state courts (itself a matter of some debate), it's hardly principled. As Donald Sensing points out, this is the sort of question that state law, and state courts, are supposed to deal with. If Congress thinks that states in general are dealing badly with these kinds of questions in a way that endangers federal constitutional rights, it is empowered to pass general legislation under the 14th Amendment. But deciding individual cases isn't something that Congress is supposed to do, and it's rather shocking to find so many "small government" Republicans supporting it.

I don't agree with Andrew Sullivan's claim that the Schiavo legislation can be blamed on "religious zealotry" -- after all, as Tom Maguire has noted, both Ralph Nader and Democratic Sen. Tom Harkin were big supporters of the bill. But it's certainly action that flies in the face of traditional conservative notions about limits to government authority, and political competence. For Tom Harkin and Ralph Nader to back expanded federal authority isn't hypocrisy. For Tom DeLay to do so, is.

The dissent on the right -- and most of the critics quoted above have been vocal supporters of President Bush, and the war -- has led some people (including me) to wonder if the Republican coalition is going to split in the face of this abandonment of principle, especially as the national-security glue that has held the coalition together weakens in the face of success in Iraq. Some are even agitating for that result. I think it just might happen.

Republicans like to point out that you have to stand for something, or you'll fall for anything. The leadership, at least, of the Republican Party has abandoned the principles of small government and federalism that it used to stand for. Trampling traditional limits on governmental power in an earnest desire to do good in high-profile cases has been a hallmark of a certain sort of liberalism, and it's the sort of thing that I thought conservatives eschewed. If I were in charge of making the decision, I might well put the tube back and turn Terri Schiavo over to her family. But I'm not, and the Florida courts are, and they seem to have done a conscientious job. Maybe they came to the right decision, and maybe they didn't; this is a hard case. But respecting the courts' role in the system, and not rushing to overturn all the rules because we don't like the outcome, seems to me to be part of being a member of civilized society rather than a mob. I thought conservatives knew this. Before things are over, they may wish they hadn't forgotten.

Some activists -- like Bill Quick -- want to set up a MoveOn-type organization, only with the goal of dragging the Republican Party in a small-government direction. Others are threatening to vote Democratic next time. More, I suspect, will remain Republicans, but less committed ones: less likely to donate, volunteer, or turn out to vote. A Republican Party that was winning elections by landslide margins might not mind that. But I don't think that today's Republican Party has that luxury. The Schiavo legislation looks like that classic political misstep, a move that's dramatic enough to upset people, but not dramatic enough to satisfy the hard core. (Bush is now being savaged by pro-lifers for not doing enough.) In the end, I suspect it would have been better to stick to principle. It usually is.

Glenn Reynolds is Beauchamp Brogan Distinguished Professor of Law at the University of Tennessee, and blogs at InstaPundit.com