A tale told by an idiot

Wildly overplaying the Schiavo protesters, ignoring facts and giving Bush a free ride, the press was full of sound and fury, signifying nothing. 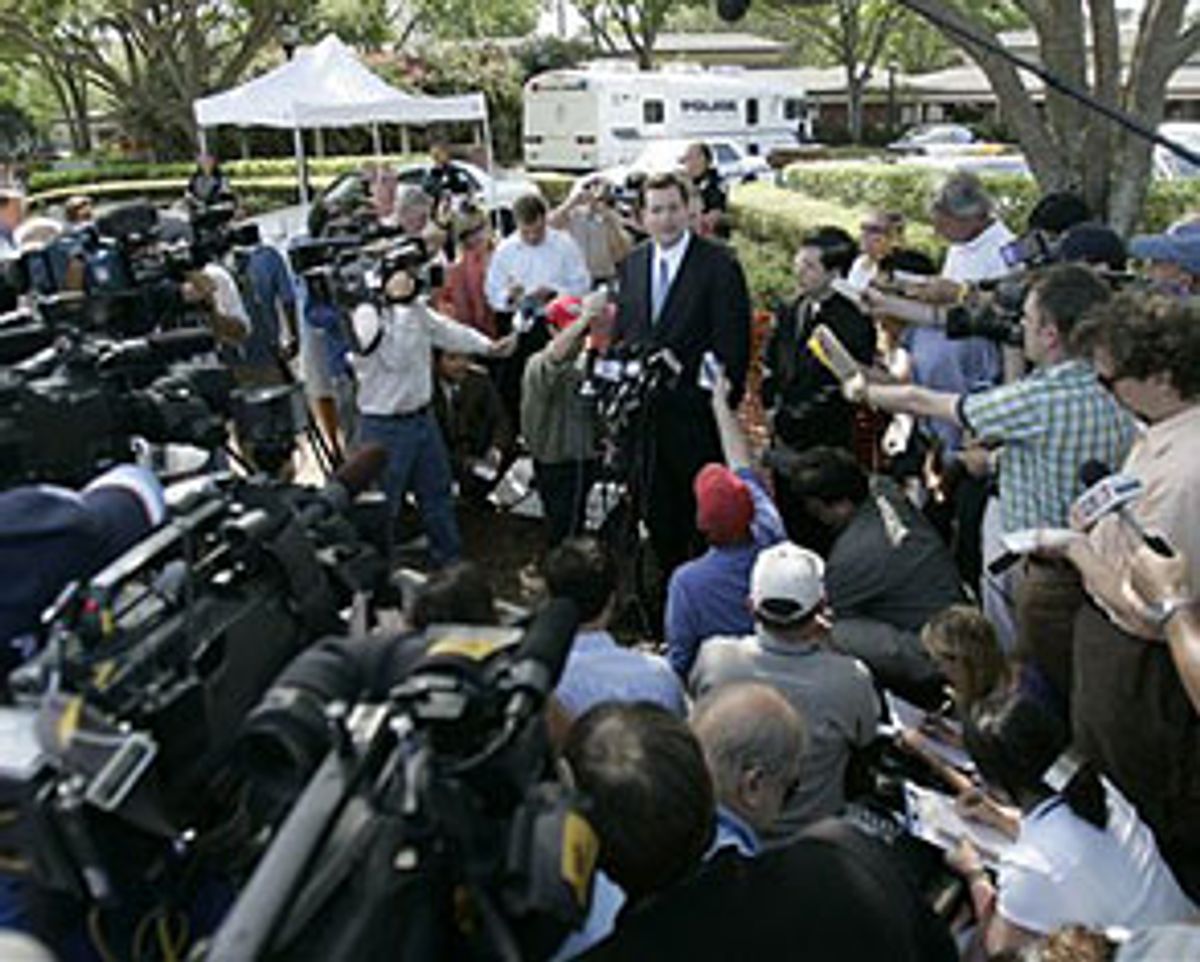 It was fitting that reporters were in danger of outnumbering pro-life supporters outside Terri Schiavo's hospice in Pinellas Park, Fla., on Thursday morning. When one man began to play the trumpet moments after Schiavo's death was announced at 9:50 a.m., a gaggle of cameramen quickly surrounded him, two or three deep.

Has there ever been a set of protesters so small, so out of proportion, so outnumbered by the press, for a story that had supposedly set off a "furious debate" nationwide? That's how Newsweek.com described the Schiavo story this week. Although it's not clear how a country can have a "furious debate" when two-thirds of its citizens agree on the issue or, in the case of some Schiavo poll questions (i.e., Were Congress and President Bush wrong to intervene?), four out of five Americans agree.

But the "furious debate" angle has been a crucial selling point in the Schiavo story in part because editors and producers could never justify the extraordinary amount of time and resources they set aside for the story if reporters made plain in covering it every day that the issue was being driven by a very small minority who were out of step with the mainstream.

Clearly, the press went overboard in its around-the-clock coverage of the right-to-die case. But at this point, that type of exploitation is almost to be expected from news organizations, particularly television, desperate for compelling narratives that can be stretched out for days or weeks at a time. And it's not fair to suggest that the Schiavo story was a manufactured one, or that it didn't spark genuine interest. It did.

What is telling about the excessive coverage is how right-wing activists, with heavy-hitter help from Washington, were able to lead the press around, as if on a leash, for nearly two weeks as they pumped up what had been a long-simmering (seven years) family legal dispute and turned it into the most-covered story since a tsunami in Asia three months ago left approximately 300,000 people dead or missing. In the past two weeks the cable outlets and networks have mentioned "Schiavo" more than 15,000 times. By comparison, during the two weeks following the Asian humanitarian crisis, those same outlets mentioned "tsunami" approximately 9,000 times, according to TVEyes, the digital monitoring service. (As for television's long-forgotten Iraq war, it garnered just 2,900 TV mentions over the two weeks that Schiavo mania ran rampant.)

Conservatives not only launched the story but were able to frame it and, at times, narrate it almost exclusively, as reporters and pundits, afraid of being tagged as liberal or anti-religion, were overly cautious about confronting pro-life Schiavo supporters about obvious factual errors in some of their statements. (Dr. Ronald Cranford, one of the two neurologists selected by Michael Schiavo to examine Terri, did not suffer the fools quite so gladly, however. Appearing on MSNBC on Monday, Cranford undressed host Joe Scarborough, who had been spinning fiction on behalf of pro-life supporters for days: "You don't have any idea what you are talking about," Cranford said.)

As the story played out on Page 1 nationwide, the press served as a platform for pro-life protesters. They were invited to sound off against tyrannical judges and Nazi-like politicians and denigrate Michael Schiavo at will while reporters eagerly transcribed protesters' personal -- and often outrageous -- attacks, yet never dared to use the word "radical" to describe their actions.

And when it became clear that Americans were overwhelmingly opposed to the unprecedented intervention by Congress and the president, the press quietly looked the other way, once again proving that the Bush White House doesn't have to worry about bad press -- Beltway reporters still seem unwilling, or incapable, of delivering it.

The Schiavo coverage was reminiscent of what followed the death last year of former President Ronald Reagan, when CNN and other news outlets simply handed over their airtime to conservatives for days at a time.

The Schiavo coverage started off with a strikingly deferential tone. For instance, on March 22 CNN's John King, interviewing Sen. Arlen Specter, R-Pa., chairman of the Senate Judiciary Committee, said, "You say Congress has the authority. I don't think anyone questions that, that Congress has the authority to grant federal jurisdiction for this case, if you will." That statement was false -- legions of legal scholars have noted that Congress has no authority to pass legislation in a specific legal case that effectively trumps state court findings.

Again and again CNN in particular seemed to do its best to accommodate the Pinellas Park noisemakers. Last week host Miles O'Brien adopted pro-life protesters' language and began referring to Michael Schiavo as the "estranged husband." As Media Matters for America noted, on March 24, CNN host Daryn Kagan said there are "a lot of people in this country agreeing with [pro-life protesters] that this would be a death without dignity." Kagan added that there are "strong, divided opinions across the country." Yet poll after poll showed that Americans were not strongly divided on this issue, and that most did not believe removing Schiavo's feeding tube would mean death without dignity.

When pro-life supporters choreographed with police the arrest of several children outside Schiavo's hospice, CNN reporter Bob Franken, in hushed tones, described the "poignant" scene. Remarking on the report on his Web site, James Wolcott wrote, "Franken's sentimentalizing of this pious photo-op is more proof that the so-called [mainstream media] is so cautious about being respectful of religion that it refuses to recognize the raw face of fanaticism even when it's filling the camera lens. Practically nothing is said about the backgrounds of the nutjob organizers of these sickly pseudo-events, leaving the impression that is simply People of Conscience converging on Florida to bear witness and catch some rays."

It's true that press outlets were very slow to pick up on the Sunday Charlotte Observer's story that Scott Heldreth, a religious activist and antiabortion crusader who helped stage the children's arrest outside Schiavo's hospice, is a registered sex offender in Florida. "The former Naperville, Fla., resident remains listed on the Florida Department of Law Enforcement's sex offender registry," the Observer reported.

Nor was much said about the background of Randall Terry, who became a constant presence on television as the Schindlers' "family spokesman." Viewers and readers heard almost nothing about Terry's extremist background as an antiabortion activist who tried to present dead fetuses to Bill Clinton during the 1992 Democratic Convention and who has talked about his wish that one specific abortion provider be "executed."

The press also downplayed references to a 2000 trial at which Schiavo's extremely conservative Roman Catholic parents conceded that even if Terri had told them she would never want to be kept alive with a feeding tube, they would not have honored that request (an acknowledgment that goes a long way toward explaining their actions in the case). For the most part, the press portrayed Schiavo's parents, Terry and the hospice protesters as simply being overly concerned and vaguely conservative. And nothing more.

Meanwhile, when polls found Americans aghast at the GOP's power play and the Schiavo story fell apart politically for Republicans, the press appeared almost reluctant -- or embarrassed -- to point out how badly the GOP had blundered.

Fox News' Brit Hume, clearly trying to downplay Bush's role in the story, informed viewers, "I guess [Bush's] intervention consisted mostly of a signature and some statements from the White House." On CBS's "Face the Nation," Time reporter Karen Tumulty made a similar comment. Addressing a pro-life guest she noted, "You described the action of the Congress and the president as very restrained in this case, although the polls would indicate three-quarters of the American public thinks that the Congress in particular really went too far" (emphasis added). In fact, according to CBS's own poll, Americans blamed both Bush and Congress equally, in part because pollsters asked about the action of "Congress and the president."

Newsweek's 2,500-word feature this week on Schiavo inserted this timid mention into the 14th paragraph of a 15-paragraph story: "Given polls showing solid majorities supporting the tube's withdrawal, Republicans may have overplayed their hand" (emphasis added). The newsweekly did not mention that Bush's job approval ratings have fallen to a new low in the wake of the Schiavo intervention.

It's hard to imagine that if President Clinton (or a president Al Gore or John Kerry) had cut short his vacation to fly back to the White House in order to sign controversial legislation, and three days later network polls showed the legislation to be wildly unpopular, reporters would not have asked, How did the president become so out of touch with the mainstream? Who at the White House is to blame for the fiasco? How is the administration going to recover politically?

There was little or none of that critical analysis in Bush's case. In fact, on Monday, on the heels of the Republicans' first disastrous Schiavo week, the New York Times ran two detailed articles about the state of the White House. One chronicled how "confident," "frisky" and "impishly fun" the president was feeling, and politely avoided any Schiavo references.

Running alongside that article was the umpteenth wet kiss directed toward White House political strategist Karl Rove, in which he was toasted for his mastery of political maneuvering. The article said that Rove was also now micromanaging the president's schedule for political purposes -- "deciding where Mr. Bush and other administration officials go as they crisscross the country trying to win public support." It's safe to assume that Rove played a role in Bush's decision to fly back to the White House to sign the emergency Schiavo bill into law -- a P.R. blunder yet unequaled in Bush's second term. The Times remained obediently silent on that point as well.

And that's when the paper wasn't busy tipping its cap to Florida Gov. Jeb Bush for his high-profile role in the Schiavo crisis. In a March 25 article, "In a Polarizing Case, Jeb Bush Cements His Political Stature," the Times assured readers that "even critics said [Bush's actions] were rooted in a deep-seated opposition to abortion and euthanasia rather than in political position." The article, however, failed to name a single critic who agreed that Bush's motives were rooted in deep-seated opposition to abortion. In fact, the one Democrat quoted in the story, Scott Maddox, departing as chairman of the Florida Democratic Party, blasted the governor: "This is less about Terri Schiavo and more about shoring up the Republican base, and that's a shame. Politics has to be in play here."

Then again, from the time the Schiavo story first became a Page 1 sensation, it took the New York Times eight days -- and a couple of dozen articles -- before one of its reporters informed readers that polls showed an overwhelming majority of Americans disapproved of federal attempts to intervene in the case.

The excessive media coverage of the Schiavo story wasn't the most disturbing part. It was how, too often, journalists appeared to be afraid of the facts.