The other Peterson trial 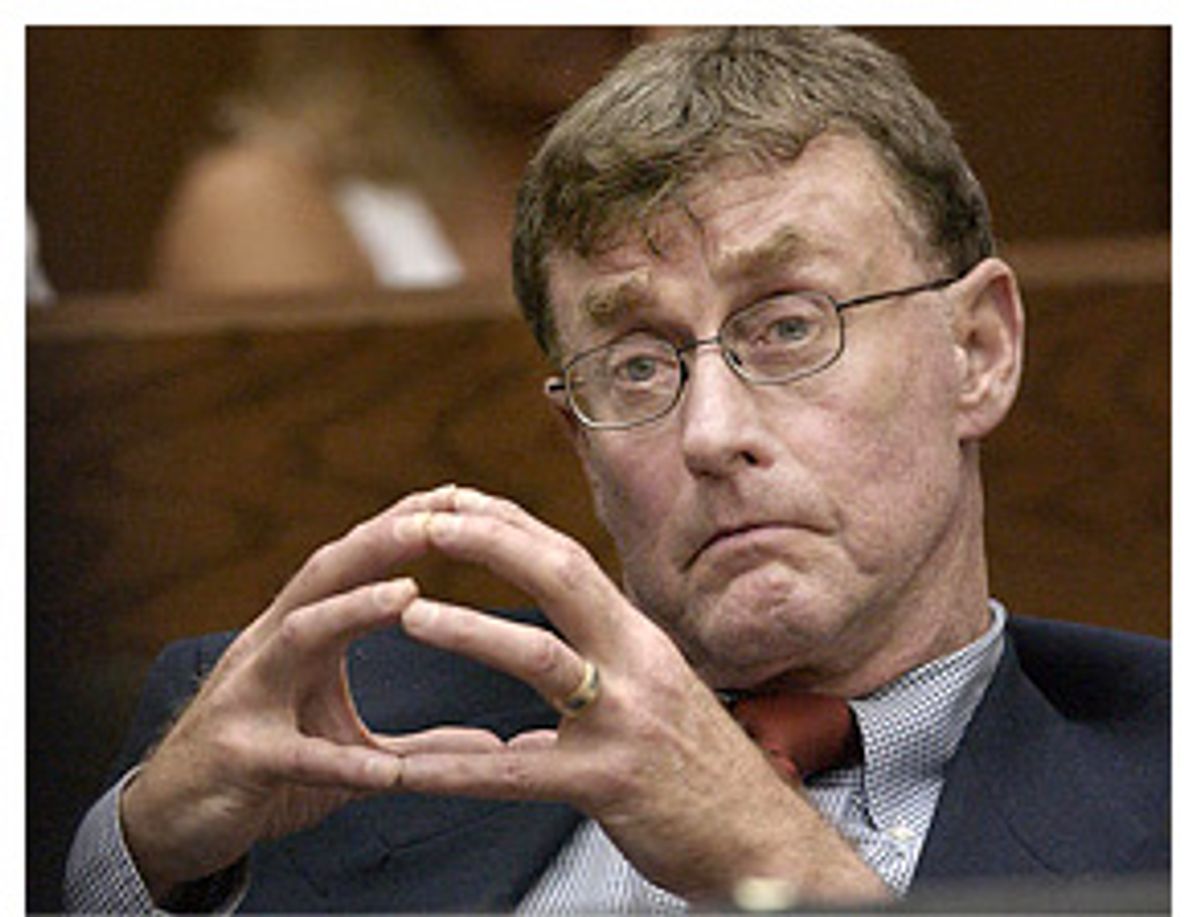 "We were both right here. And you know, the dogs would come over, and we were just talking and finishing our drinks. And then she said, 'I gotta go in, because I've got the conference call in the morning.' And she started walking out that way. And I stayed right here. Don't think I said anything special to her, certainly not thinking this was the last time I'm gonna see her." -- Michael Peterson, describing the night of his wife's death in "The Staircase," an eight-part series to air on the Sundance Channel

While visiting my hometown, Durham, N.C., in December 2001, I read the first reports of a police investigation into the death of a local woman, Kathleen Peterson, who was found at the bottom of a flight of stairs. The woman's husband, Michael Peterson, 58, was a well-known local novelist who'd written about Vietnam. He'd once had a column in the local paper and had made an unsuccessful run for mayor in 1999. He told police that he discovered his wife, a 48-year-old executive at Nortel, in a pool of blood and called 911, but his wife stopped breathing before the paramedics arrived.

On the local news, the same shot of Michael Peterson talking to reporters was repeated over and over again: "I've whispered her name more than a thousand times, and I can't stop crying," he said into the microphones.

There was something wrong about his response, something too egocentric and melodramatic about it. When I asked my mom about the case, she told me that she was also suspicious. A friend of hers who lived down the street from the couple said that there was no way Peterson could've killed his wife; they had always been the perfect couple. But my mom took those words -- "perfect couple" -- with a grain of salt. Who knew what kind of darkness lurked behind any supposedly happy marriage? Another friend more plugged in to the local gossip, meanwhile, mentioned rumors that Michael might be gay.

Naturally, when I heard that the Sundance Channel would be airing an eight-part documentary (Monday nights beginning April 4, at 8 p.m. EST) about the case by Oscar-winning director Jean-Xavier de Lestrade, I wanted to see it. This was the "French film crew" so often mentioned in the Durham Herald-Sun's coverage of the Peterson case, faithfully clipped and sent to me by my mom, which I'd read from start to finish since I first stumbled on Kathleen Peterson's obituary.

The case had more twists and turns than a Hollywood suspense thriller: Michael had four children from his first marriage -- two sons by his wife, and two adopted daughters who were the children of friends who had died. But then it was discovered that the girls' mother, Elizabeth Ratliff, had also been found at the bottom of a staircase in Germany back in 1985, and Peterson had also been the last person to see her alive.

On top of that, Kathleen Peterson's sister claimed that Kathleen had been worried about losing her job at Nortel, which might have forced the couple to move out of their 11,000-square-foot mansion. Peterson, meanwhile, stood to gain from a $1.4 million life insurance policy on his wife. Plus, e-mails were discovered that indicated that Peterson had contacted a male prostitute shortly before Kathleen's death. Eventually, Michael Peterson was charged with his wife's murder; the prosecution claimed that he had beat her in the back of the head with a blunt instrument (leading to all the blood). Peterson's team would eventually claim that his wife simply must have fallen, hitting her head on the door frame at the bottom.

According to the paper, this film crew had access to the entire trial and more. And from the opening credits of "The Staircase," with its somber refrain and artful shots, it's clear that de Lestrade's documentary is very different from those ubiquitous, cheap, sensationalist takes on murder trials (there are several on the Laci Peterson murder already looping through cable TV).

Most remarkable, though, is the access the documentary team manages to get to the players in the enfolding drama, including Michael Peterson himself.

Early on, Peterson tells us in his own words what happened the night Kathleen died in a disturbingly matter-of-fact tone. He says that the couple was outside by the pool (many asserted that it was far too chilly that night for them to relax outside for so long) before Kathleen got up to leave. Michael demonstrates her walking back toward the house. "And the last I saw her was when I was there, and she was just walking here. That's it, that was the last I saw Kathleen -- alive. No, she was alive when I found her, but" -- [long pause] -- "barely."

Next, we hear Peterson's panicked voice on the 911 call. Then Peterson's son, Todd, tells the camera what he saw when he arrived back at the house early that morning. Later we see the damning images of Kathleen from the police video, lying in a pool of blood, blood covering the walls around her.

De Lestrade's coups are impressive. Wait until you see Peterson make dinner and chat with his adopted daughters about the case, scoffing at reports in the paper of his bad temper, and pretending to put one of the girls in a stranglehold. And then there's the moment when Kathleen Peterson's sisters examine some of Peterson's archived personal writings, which include the statement, "Being happy is doing what gives you pleasure: Loving, sacrificing, murdering."

Throughout the entire ordeal, Peterson appears to remain oddly upbeat, even when he's expressing his displeasure with the press or the local officials. In fact, from the minute the cameras start rolling, it's easy to question Peterson's soundness of mind. His twitchy mannerisms, his morbid humor, the way he often seems so out of step with the gravity of the situation or what's happening around him -- all of these only serve to deepen existing suspicions.

Yet the filmmakers clearly aim to question not just Peterson's possible guilt, but the justice system itself. The crew skips some of the most damning details of the trial -- the fact that the couple were in serious financial straits, for example -- in order to focus on the circus atmosphere of the trial and hint at the backwater nature of the prosecution team. They include many shots of the expressions on the face of the deputy district attorney, a very old-fashioned-looking Southern woman, and they dramatically zero in on a moment she calls the gay porn found on Peterson's computer "filth."

In an article tellingly titled "On Trial for an Unusual Life," de Lestrade tells Australia's The Age of his negative impression of the prosecution team. "They couldn't imagine that Michael and Kathleen could live a happy life and be a happy couple with Michael having some gay encounters. To them that was unbelievable, it was out of their minds. They are very narrow-minded."

Narrow-minded as it may be to describe porn as "filth," the defense painted Michael and Kathleen as a perfectly happy couple, and the prosecution's assertions were an integral part of debunking these claims. Since Peterson had recently e-mailed a male prostitute, and Kathleen was on Peterson's computer the night she died, it seems reasonable to speculate that her discovery of his dalliances might have sparked a fight. De Lestrade's temptation -- shared by many of those unfamiliar with the South -- to paint the prosecution team as small-town folk in the thrall of Bush conservatism is more than a little bit disturbing to someone who knows that, with all its flaws, Durham is a relatively liberal, progressive town.

Still, de Lestrade's choices are so often riveting, his camera work so beautiful and sad, that it's easy to forgive his angle -- we all have our prejudices, after all. Perhaps I'm prejudiced against Michael Peterson. He's a novelist who wrote dramatically about killing in two novels, an egocentric guy who ran for mayor, lived in a mansion, clearly romanticized his life, and seemed happy to have a film crew document his darkest hour. His wife, Kathleen, and a close friend, Elizabeth Ratliff, were both found at the bottom of a bloody staircase, and Michael was the last one to see each of them. Autopsies showed both women had similar injuries to the back of the head. And then there's the volume of blood on the stairs. If walking up stairs can butcher someone like that, I'm not sure why anyone would risk having a staircase.

The night after the defense team makes its closing arguments, we see Michael's brother Bill pour him a glass of wine and joke, "Enjoy it. It could be your last."

Michael chuckles in response. The two are clearly feeling optimistic. Bill, a lawyer who's consulted with the defense team along the way, tells his brother that he thinks that his odds of being convicted are slim. "I handicap this thing extremely low. But on the other hand, you just never know. Lightning strikes."

Gallows humor could be understandable, given what Michael Peterson faced at that moment. But when paired with such little sentimentality about either Kathleen Peterson or Elizabeth Ratliff -- save for a dramatic appearance by Michael in the courtroom -- this moment of levity makes the blood run cold.

Regardless of what you think of Peterson's innocence or guilt when the final episode ends and the verdict is rendered (don't worry: no spoilers here), you won't be able to forget this engrossing and ultimately tragic story.