A poet battles -- and breaks free

In an excerpt from her new book, "Break, Blow, Burn," Camille Paglia takes on Wanda Coleman's poem "Wanda Why Aren't You Dead." 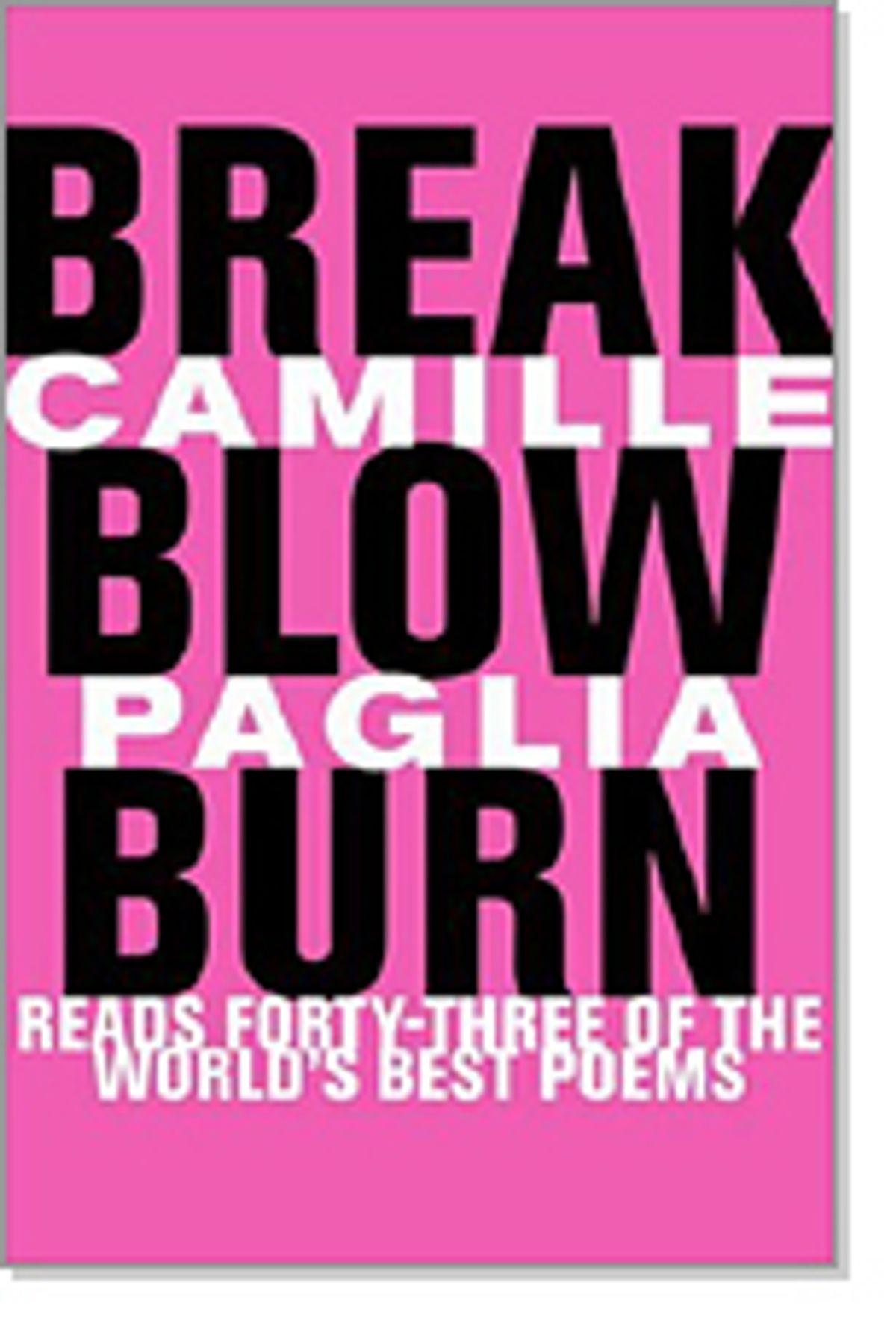 Click here to read "Wanda Why Aren't You Dead."

A poem struggles to be born. The poet's mind is invaded by a raucous gang of nags, snoops, gripers, and doomsayers. Wanda Coleman's eponymous protagonist at first seems invisible. But the haranguing voices, with their multiple points of view, gradually sketch her ghost portrait, like a shimmering hologram. Making us share her exasperation and despair, she gains substance and presence until by the end she looms like an avenging Fury, beating off all opponents and willing the poem into existence.

Coleman's vernacular is so alive it practically jumps off the page. The snatches of boisterous conversation, as if overheard on the street or through a window, become hilarious through sheer excess. We get slang and profanity ("ain't," "goddamn") as well as African-American syncopated speech rhythms and idiomatic verb forms (a man "want" rather than "wants"; "girl, you crazy"; "you too serious"). There's a strange effect of claustrophobia yet speed, produced by the absence of stanza breaks and full punctuation. We can't escape the chattering racket. Language is an affliction or epidemic. Eleven questions (including the title) stream by without a question mark because the interrogators don't really want answers. Their loaded questions are acts of hostile encroachment -- or at least that's how the poet processes them in her cynicism and fatigue.

Coleman's persona adopts a stoic silence like George Herbert's in "The Quip," where the poet is derided by worldly temptations. Herbert italicizes his inner voice ("But thou shalt answer, Lord, for me") because it's unheard -- or rather heard only by the reader. Coleman too uses italics to signal her inner voice of resistance to materialism and status envy: "wanda why are you so angry." But Herbert's serene, priestly detachment is impossible for a single mother with "a ready-made family," deemed by others an obstacle to romance. She's enmeshed in practical responsibilities.

This poem is a classic drama of an individual pitted against the tyranny of the group. Coleman's protagonist is in transition between generations, races, and social classes. Little solidarity is evident within her home community, which is portrayed as competitive and coercive. Her habits and nascent wishes snake through the grapevine for review and debate by a catty chorus of family, friends, lovers, neighbors, and coworkers. Whatever her aspirations or achievements, she is doggedly judged by her appearance and male attachments. Even wellmeaning advice becomes subtly undermining.

Everything about her needs to be fixed -- according to the meddlers whose critiques she has dangerously begun to internalize. Her hairdo isn't black or hip enough. She's too fat, and her feet are too big. Her pay's mingy, her apartment's a dump, and despite all that, she should lighten up! Her sex life is under withering scrutiny: she's used goods, with dependents in tow. She's uppity for shunning black men -- a cunning provocation, of course, if it comes from a black man trying to seduce her. Even her exotic name is reductively redefined ("that's a whore's name"), making her scrabble for every iota of identity. She's bullied to embellish: any kinkiness -- bisexuality, promiscuity, sadomasochism -- would be better than her humdrum self.

Her tormentors' baiting insinuations mire her in subtext. "I think you need this" is a pusher's tagline coming from an intimate: drinks or drugs are just the elixir to normalize her -- or rather to make her receptive to the speaker's hidden agenda. Banal or squalid scenes are glimpsed as if by strobe light -- episodes of insensitivity, forgetfulness, or bad or careless sex ("i didn't know i was hurting you / that was an accident"). Medical crises make the body yet another betrayer. "I don't think they'll take that off of you": moles, tumors, and unplanned pregnancies all look the same to an arbitrary, impersonal health system.

Strangers patronize: "wanda what is it like being black" -- as if she were an anointed spokesman for her race, ready to recite on cue and condense an epic to an anecdote. The bystanders' most presumptuous claims -- "i know what you're thinking" and "i don't think you really mean that" -- evict her from her own mental space. The pestering voices are as mechanical as a broken record: "if i were you were you were you"; "that that that / that that that." Fill in the blanks. The real "hell hole" is not her shabby flat but the echo chamber of her overwrought brain. Words dull and drain or infest with clichis. The poem's refrain is her anger, alleged by third parties. Though we don't hear her responses, the climax -- "wanda you're ALWAYS on the attack" -- becomes intelligible by increments: anger is her energizer and defensiveness her armor, allowing her to think and write.

In the poem's visual design, the dense mass of negative comment rises like a black slab, a Tower of Babel. At the end, escaping lines float free, as if the poem were taking breath. Slowly gaining distance, the poet muses, "wanda wanda wanda i wonder / why ain't you dead." The wonder is that she survives and thrives. The poem asserts the life force amid daily wear and tear, small humiliations and frustrations. She endures, a Wonder Woman who can't vanquish enemies but knows how to deflect their bullets off her magic bracelets. Yoked to duty and routine, this Wanda can't wander like Walt Whitman but must hold her ground as she fends off the guilttrippers, parasites, and con artists. But she turns the painful struggle for selfhood into deliciously quirky comedy. The poem's lashing lines resemble "snaps" in an old African-American game, the "dozens," where duelists trade mock insults ("Yo' mama's so ugly, she'd scare moss off a rock"). It's an exercise in mental toughening: when the worst can be said, reality seems less harsh.

Chanting "wanda" nineteen times, the poem is like an exorcism, banishing impish spirits that grasp and scratch. Who is Wanda? The poem answers for her, as she wickedly parodies her detractors' voices. Their yammering stops with the door slam of the last word ("dead") -- the line recapitulating the more formal, teacherly title ("aren't" rather than "ain't"). The poet is definitely not dead: her salvation is her grit, resilience, and commitment to art making. This poem would be explosive in performance, with the poet's grumpy, sarcastic persona barreling through hindrances, then pausing a beat before bursting free. She has regained control of language and made it hers.