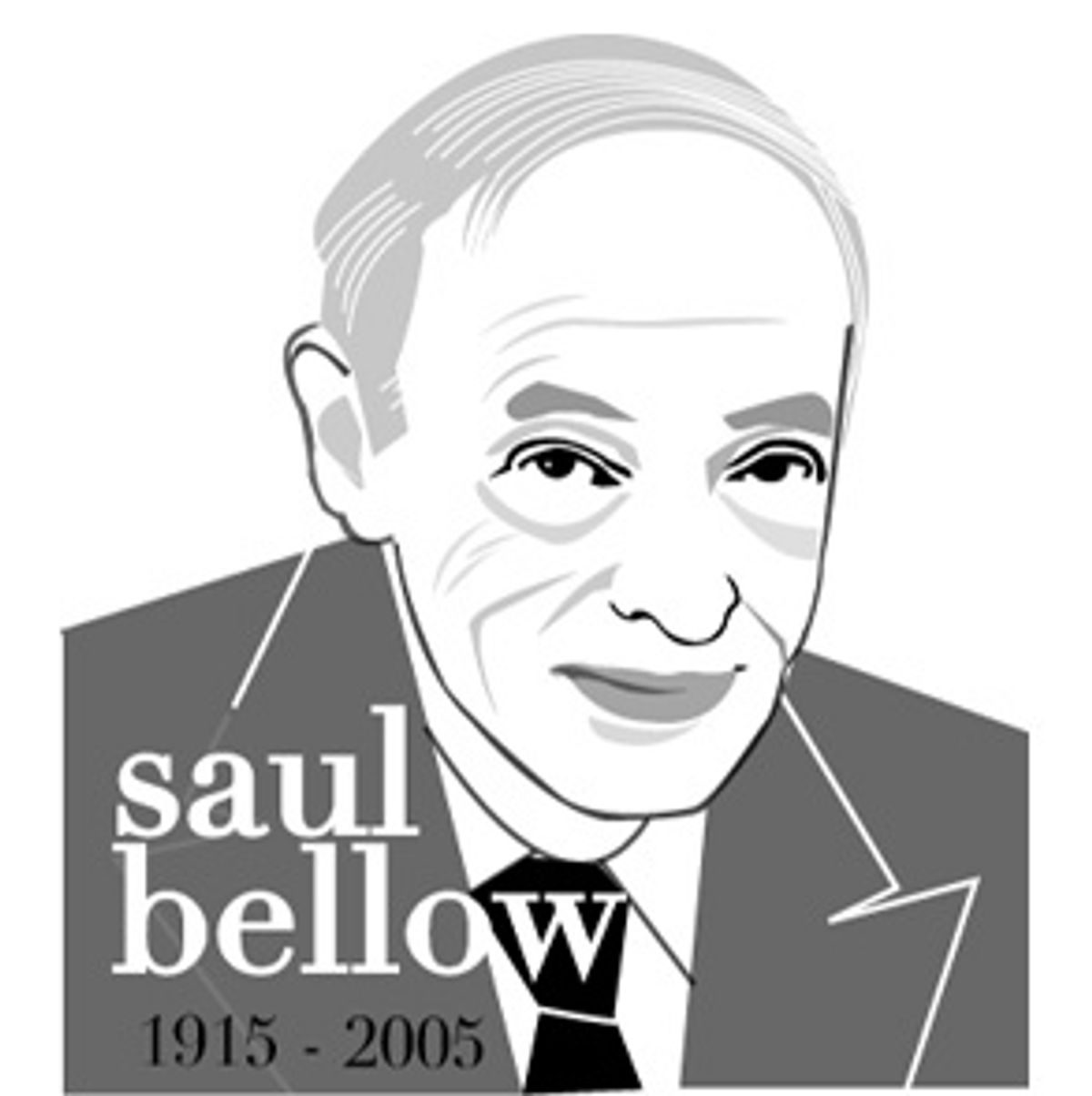 Born in a Jewish slum in Montreal, raised from the age of 9 in Chicago, Saul Bellow is widely considered the greatest postwar American novelist, and he has won the biggest prizes, including the Nobel. Asked in his later years what part of his life he regretted, he told an interviewer, "I gave a lot of time to women and if I had my time again I don't think I would do it that way ... I married several times with my ends in view and I didn't reckon on the ends of the wives. Then I found myself being carried out of my depth."

I quote this because it is so Bellow, it could have come out of a Bellow novel. (In fact it did -- Bellow is quoting almost verbatim from "More Die of Heartbreak.") That combination of self-knowledge and fake innocence is the hallmark of his heroes, all recognizable versions of himself: overeducated bulls stumbling through the china shops of love, marriage, fatherhood, celebrity, bohemia and academe. On the way they ruminate thickly on the eternal verities and the crimes of the 20th century, following each erection like a signal from some transcendental daemon. They are boring, infuriating monsters of self-absorption and have flattered several generations of like-minded introspective men (including the members of the Nobel Committee), but they have nothing to do with Bellow's greatness.

Bellow's chief glory is that his characters have wandered off the page and into the world, in Bellow's case, en masse. Not wandered -- burst. They seem to fragment with life: eyes like this, nape like that, insteps reminiscent of something else, a nose "originally fine but distorted by restless movement." Even Bellow's best-dressed characters give an impression of skewed wigs and ill-fitting suits. They run around generating plots, on the slenderest of motives, with impersonal, centrifugal intensity. Think of the Beastie Boys in the "Sabotage" video; think of early Almódovar or John Waters, or even late Warhol: These are Bellow's cinematic equivalents. Bellow's women, short or tall, are marvelous, larger-than-life wet dreams: earthy, intelligent, put together or falling apart, in either case spilling out of their clothes, at the mercy of their own sexuality. The men (all but the heroes) are full of scams. That's what exports: this panorama of appetites not quite in check.

Bellow's major novels fall into several categories. There's the apprentice work: "Dangling Man," a "Notes From the Underground" rewritten for wartime bohemians (with the memorably bad last line "Long live regimentation"), and "The Victim," Bellow's first lasting work, the uncanny tale of a struggling, upwardly mobile Jew hounded by a ruined member of the Establishment.

Then come the three longer novels on which Bellow's reputation rests. A picaresque overlaid with pseudo-Emersonian solemnity, "The Adventures of Augie March" follows its hero's rise from Chicago urchin, during the Depression, to footloose European playboy after the war. Here Bellow busts out that weird prose of his, not yet under control ("There's the burning of an atom. Wild northern forests can go like so many punk sticks. Where's the competitor fire kindling, and what will its strength be? And another thing is that while for the sake of another vigor is lacking, for the sake of the taste of egg in one's mouth there's all-out effort, and that's how love is lavished," etc.). He refines this slangy translationese in "Henderson the Rain King" -- a modern-day "Rasselas" set in an MGM-style Africa -- and "Herzog," which follows the romantic entanglements of a cuckolded Romantic scholar at work on his magnum opus. None of these novels has aged gracefully, although Bellow's prose itself seems grander with each passing year, grander and more irrecoverable in its quickness of perception, its marriage of brain, nerve and sensibility. It is the sound of the golden age of Jewish-American fiction. Bellow's later two Big Novels, "Humboldt's Gift" (a wonderfully screwy fictionalization of Bellow's troubled friendship with poet Delmore Schwartz) and "More Die of Heartbreak" (about the romantic travails of a hapless botanist) are his funniest and most fun, but none approaches the passion of "The Victim" or Bellow's masterpieces: "Seize the Day" and "Mr. Sammler's Planet."

You can't read "Seize the Day" without awe and regret; Bellow has never stretched half so far as he did in this tiny slice of life. Having failed as a movie actor, salesman and husband, Tommy Wilhelm -- the only vulnerable (or inarticulate) hero Bellow has ever managed to write -- finds himself, in his mid-40s, living in the same hotel as his father on the Upper West Side, broke, popping sedatives, confiding in a shady old neighbor who persuades him to invest his last few hundred dollars in the stock market. Alone among Bellow heroes, who spend most of their time dodging love, Tommy yearns for connection -- with his dead mother, with his father, with a new wife, with his kids in Connecticut. Tommy makes Bellow's existential questers look like a bunch of jerks.

So, in his own way, does Arthur Sammler, hero of Bellow's most perverse novel, "Mr. Sammler's Planet." An elderly, widowed survivor of the Nazis -- and before the war, a member of the Bloomsbury circle -- Sammler is (as everyone in the book keeps pointing out) a remnant of sanity and culture in a world gone mad: again the Upper West Side, this time in the late 1960s. Bellow subjects Sammler to various barbarities: Invited to lecture at Columbia on "the British Scene in the Thirties," he's jeered off the stage ("'Why do you listen to this effete old shit? What has he got to tell you? His balls are dry. He's dead. He can't come'"); his younger relatives burden him their empty sexual intrigues and shrink-sponsored brattiness; in the novel's greatest scene, a handsome black pickpocket corners Sammler and reveals his big dick.

Here, as in "The Victim," Bellow's precursor is Kafka: Every minor character acts out the desires and terrors of the guilty hero, who keeps insisting that these specters have nothing to do with him. Some readers have charged the book with racism, which is understandable (Sammler dismisses the sexual revolution as a quest for "niggerhood") but misses the point. "Mr. Sammler's Planet" is about blackness as fantasy, whiteness as the badge of the solipsist. Solipsism, of course, is the general condition and limitation of Bellow's novels. And while we suffer that limitation less gladly than readers did at midcentury, Bellow bodies forth our lunacy and lack of connection as nobody else has done.