This French movie about adultery captures the intoxicating -- and terrifyingly complex -- essence of marriage. 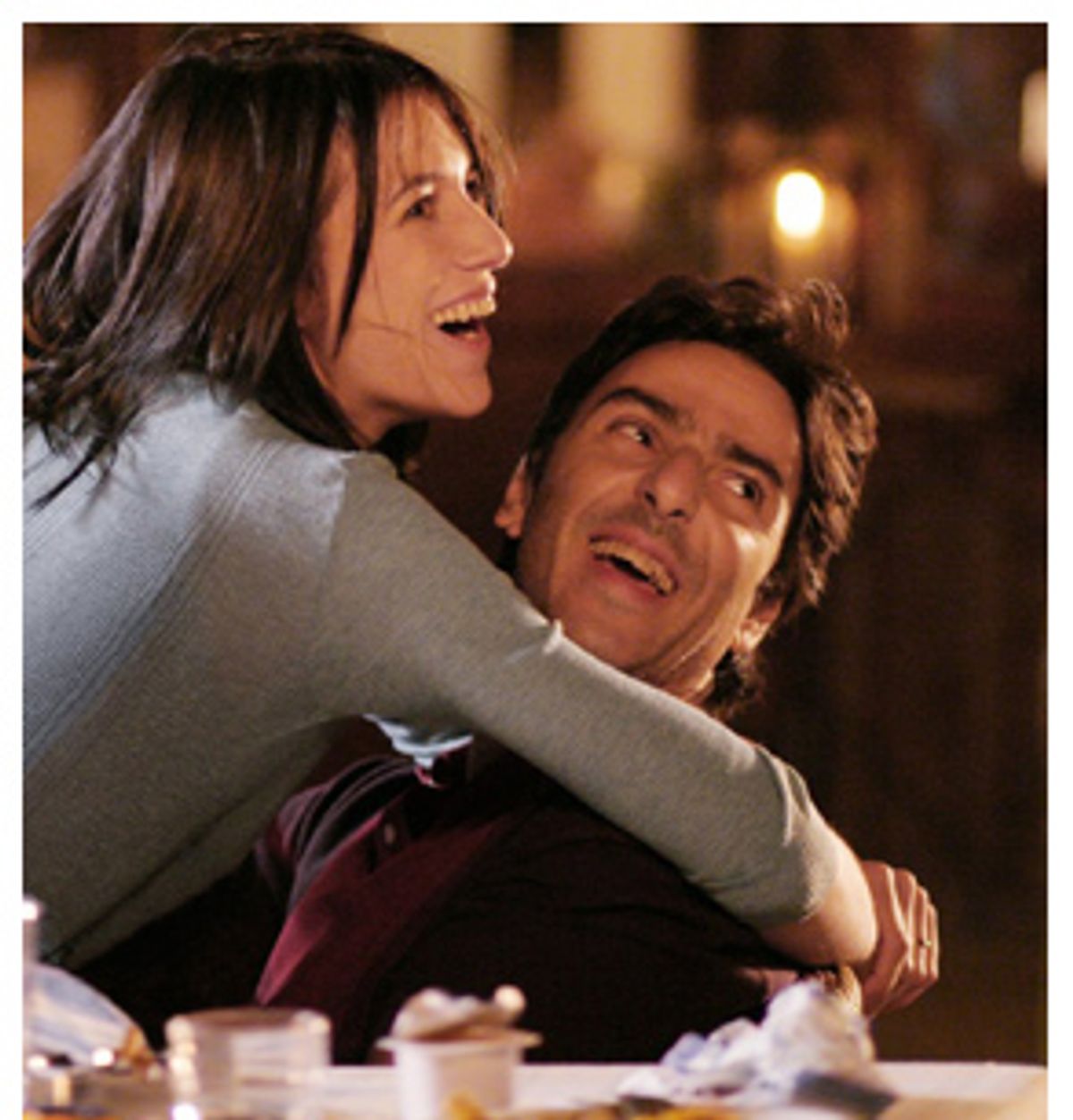 Any movie about infidelity should automatically be about marriage -- and yet so few of them are. Because adultery is part of its subject (though not the whole of it), the extraordinary "Happily Ever After," from the French actor, director and writer Yvan Attal (he made the 2002 "My Wife Is an Actress"), is in danger of being perceived as one of those drolly dull French bedroom comedies, the kind of thing that cultured American audiences used to flock to in the '70s. You could always count on the French to give you lots of mixing and matching, coupling and recoupling, and we Americans would look on, tittering with polite amusement as if we were watching a Pepé Le Pew cartoon. "Those French, they know from adultery!" was always the subtext, one we enjoyed mightily, at least as a diversion from the strain and heartbreak of making our own marriages work.

Maybe the French do know from adultery, at least insofar as they're a nation of grown-ups who were baffled that we'd even think of impeaching a president for a minor Oval Office indiscretion. But "Happily Ever After" isn't about cultural differences; it's about the dumb things people do for reasons they don't understand, and the smart things they do sometimes even against their better judgment. And although "Happily Ever After" is ostensibly about adultery -- that is, an instance of adultery provides its dramatic tension -- it's really about marriage, and the unknowability of what makes good ones, as well as seemingly bad ones, work. The picture is neither comedy nor drama but an iridescent blending of the two, like the complex sky of a Turner painting. Is there trouble in that sky, or simply vast, nearly incomprehensible beauty? Or, more confusing still, both at once?

Vincent (Attal) and Gabrielle (Charlotte Gainsbourg, who is Attal's wife in real life) have what looks to be a stable, comfortable marriage. Like many young married couples, they get home from their jobs, spend some time with the kids -- Vincent and Gabrielle have one, a mischievous little monkey named Joseph (played by Attal and Gainsbourgh's real-life son) -- and then sit down to a coffee table laid with a takeout feast. "Happily Ever After" is dappled with those kinds of ordinary details, not to suggest how dull everyday life is, but to magnify its textures. We see another side of Vincent, who sells luxury cars for a living (Gabrielle is a real-estate agent), when he's hanging out with his two closest friends, George (Alain Chabat), who's constantly griping about his wife, Nathalie (Emmanuelle Seigner), and the unmarried Fred (Alain Cohen), a spectacularly average-looking fellow who sleeps with a different beautiful woman practically every night. Vincent and George both roll their eyes at Fred's exploits; their envy is both mock and deeply genuine -- the suggestion is that they don't dare to untangle their feelings into specifics. But while Vincent seems to be the most happily coupled of the three, he's actually having an affair, and not just a fling: He seems to be in love with his mistress (Angie David), although he's careful to make it clear to her that he loves his wife, too.

There are no angry confrontations or tearful confessions in "Happily Ever After" -- Attal is more interested in what's going on beneath the surface of his characters. Vincent's two friends come off as real people, not types, and their own relationships aren't just filler for the main narrative: They offer shades of subtlety (sometimes comic and sometimes wistful) to the story. (Most notably, the prickly liaison between George and Nathalie pops into stark relief by the movie's end; they go from being the sort of mismatch headed for disaster to two people whose frustration with each other is its own kind of functional adoration -- you can't picture them apart.) And as Attal plays him, Vincent isn't a bad guy, or even a particularly misguided one. We have no idea how he's fallen into this affair, or even, really, how much it means to him. Vincent exudes cheerful averageness; in some ways he seems too boring to embark on an affair.

That's probably the point, because the movie belongs to Gainsbourg. It's not clear whether that was Attal's intent from the beginning: The movie isn't autobiographical, he has been quick to point out, although it's obviously deeply personal. But part of what makes "Happily Ever After" so affecting, I think, is that while it often pretends to be focused on male midlife confusion, Gabrielle's feelings are its true center. Attal is less interested in the bad behavior of men than he is in the secret life of women. You could view the script as a love letter from Attal to Gainsbourg -- her performance is her ardent response.

Gainsbourg is an arresting, unusual beauty: Her frame is lithe and willowy but hardly fragile, and she has dark, shaggy rock-star-luxe hair. Her profile is strong, but her features are soft: Her nose is a bit longer and wider than we're used to seeing in movie stars, and her mouth seems to turn down at the corners even when she laughs. She's as mighty and as unassuming as a tall lion cub. You'll see more conventionally beautiful actresses in the movies this year, but I challenge you to find one more captivating than Gainsbourg.

Gabrielle knows Vincent is having an affair not because he tells her, but because she intuits it -- we see the exact instant it dawns on her, and the look on her face is enough to break your heart precisely because of its feigned neutrality. An affair isn't necessarily the end of the world, but it could mean the end of a world, and the recognition of that passes across her face like a careless cloud obscuring the sun. She imagines what it would be like to live without Vincent, what it would be like to raise their child alone. (Attal frames this fantasy simply and effectively: Gabrielle's mind wanders as she shows an empty, echoing apartment to a potential buyer -- she suddenly becomes painfully aware of the flat as a hollow nest of rooms that used to harbor someone's life.)

Gabrielle addresses Vincent's affair in her own way. She talks to no one about it, save a scruffy Englishman she meets on the tropical holiday she takes with Joseph. (The actor who plays this fellow is named Keith Allen, and his few small scenes with Gainsbourg are wonderful, particularly because we expect the guy to be nothing but a sleazy scrubber.) She knows she should be viciously angry with Vincent, but that's not what she feels: The knowledge of his affair, instead of inciting jealousy or possessiveness, inspires her to take inventory of what he means to her and, even more important, what she wants out of life herself.

And this is where Attal's vision of marriage, and of sexual fidelity, takes its most unexpected and most generous turn. In one of the movie's loveliest and most arresting scenes, Gabrielle has an encounter with a devastatingly attractive stranger in a record store. (While I generally make it a rule not to reveal surprise cameos, I'm hoping more people will make it a point to see "Happily Ever After" if they know that this beguiling stranger is played by Johnny Depp.) The two, listening to the same song through separate headphones -- Radiohead's "Creep" -- are isolated but connected. The song unfolds in its entirety (just one instance of the way Attal uses pop music with exceptional grace throughout the movie) and becomes a mini-soundtrack for the attraction that's blossoming between them. Gabrielle lives a separate lifetime within the space of that song, a lifetime that doesn't necessarily preclude the existence of her spouse -- it's just that, for the moment at least, she needs to live only for herself.

Isn't the idea of living for oneself anathema to marriage? Somehow, most of us married people tend to believe that, if only to protect us from having to come clean about our own inappropriate thoughts, desires or, God forbid, actions. But "Happily Ever After" has the guts to suggest the obvious: that marriages aren't indistinct blobs created from the smooshing together of two people, but meetings of selves, with all the complications, hazards and risks that meeting implies. One of the movie's most affecting sequences is a wordless one, in which Vincent's parents (they're played by Anouk Aimée and French actor, director and writer Claude Berri) enter a restaurant, consume a whole meal, and then put on their coats to leave, all without speaking a word. We've all seen those couples in restaurants -- couples who have been together so long they either have nothing left to say, or need to say nothing. We may think we know which couples are which, but we really don't. "Happily Ever After" is an exhilarating, joyous picture, but it's sometimes terrifying, too. It offers a vision of marriage as an adventure we embark on together, alone. If you didn't cry, you'd laugh.