The passion of Andrea Dworkin 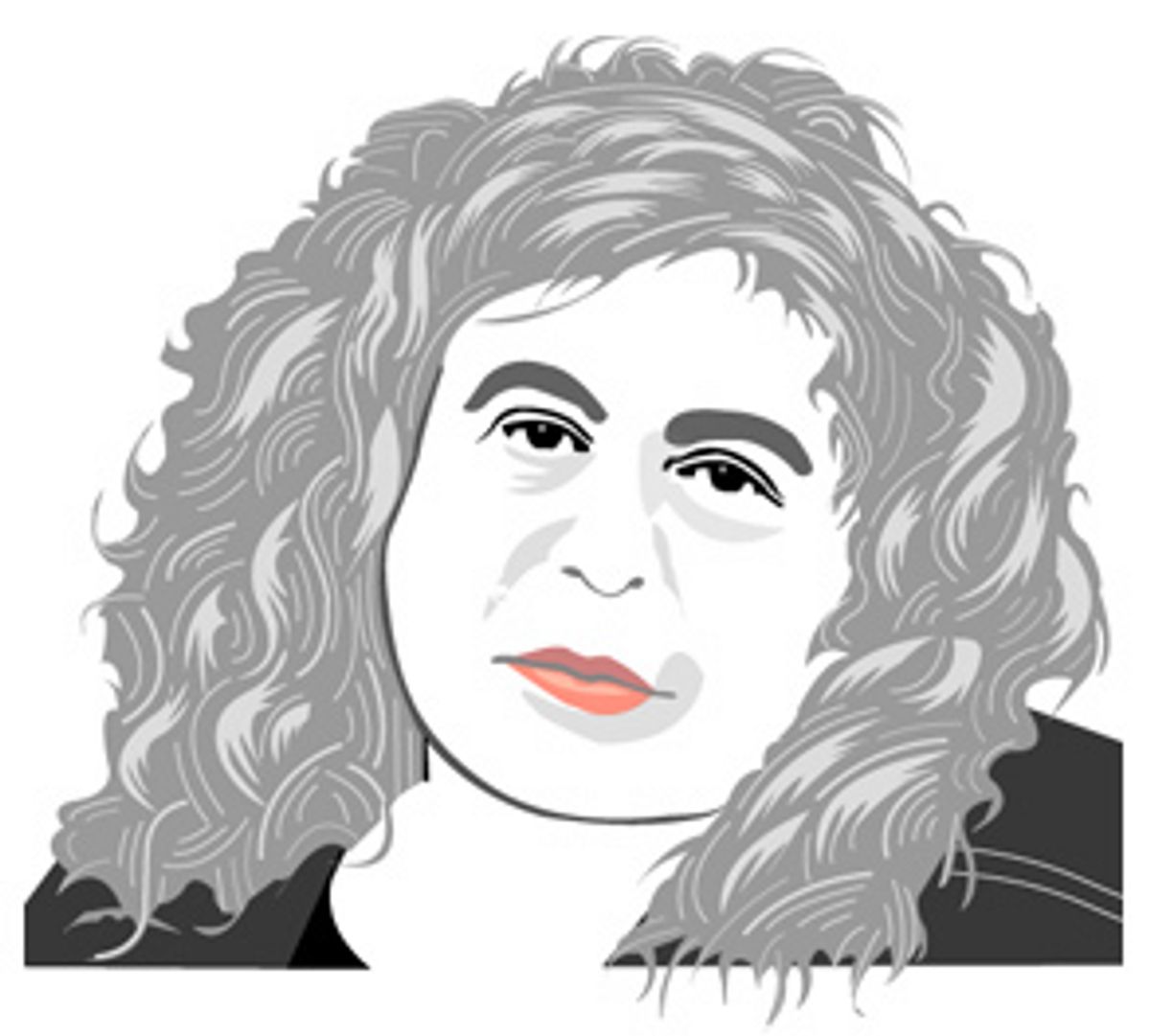 Though holdovers from the counterculture of the 1960s will probably hate to hear it, Andrea Dworkin, who died over the weekend, was one of their own. The rosy lens of intervening decades has softened many people's memories of those times, so that it's become easier to see the '60s as a time of righteous, liberal-minded protest movements and groovy celebrations of pot and casual sex.

But Dworkin, the product of what she describes in her 2002 memoir, "Heartbreak," as a "horrible, awful, stupid suburb," who fled clutching a copy of "Howl" to New York City to meet her idol, Allen Ginsberg, kept the faith. She was one of the last remnants of the extremist spirit you encounter when you go back to the source materials -- leaflets, underground newspapers, manifestoes -- created right in the moment, the spirit that called for, and firmly expected to get, permanent revolution, the abolition of work and the summary shooting of "pigs" in the street. It was the kind of spirit that had teenagers planting bombs in post offices for hazy reasons. For Dworkin, it eventually evolved into the idea that rape victims should be allowed to personally execute their attackers. That idea was grandiose, it was idealistic and, like Dworkin, it was ultimately self-defeating.

To Dworkin's admirers, she was a hot-rod combination of martyr and holy warrior, a survivor of sexual abuse who dared to speak truth to power. To her critics, she was a raging harpy who rose up out of nowhere, intent on taking away their porn and (some of the male ones vaguely suspected) their manhood. With law professor Catharine MacKinnon she wrote an ordinance (passed by the city of Indianapolis) that defined pornography as a kind of speech crime that violated the civil rights of all women -- the law was later overturned as unconstitutional. She testified before the infamous Meese Commission on pornography, forming what many saw as a dangerous alliance with the radical right. She was said to have written that all heterosexual intercourse was the equivalent of rape, though she denied that the passage in question amounted to such a claim.

Dworkin was a gifted, galvanizing communicator, both in print and as a public speaker. She was the Jonathan Edwards of radical feminism, capable of calling ecstatic souls to her cause, transforming her listeners and readers in ways many of them never forgot, even if they eventually came to disagree with her. (See Susie Bright's eloquent eulogy for an example.) She could inspire impromptu Take Back the Night marches and the instant formation of anti-violence groups, sincere efforts to do something to check the abuse that real women really do suffer every day, even if the response to it in this case was more ideological than practical.

But Dworkin was also a pioneer of a particular and pernicious type of rhetoric, one currently being used much more effectively by talk radio hosts and the extreme political right. Here's a classic example: During the Monica Lewinsky scandal, Dworkin quarreled with feminists who did not consider Bill Clinton's sexual encounters with the White House intern to be sufficiently exploitative to merit impeachment. A principled, reasonable argument could be made that Clinton's behavior was unethical, but Dworkin was never about reason. "What needs to be asked," she told a British journalist, "is, was the cigar lit?"

The statement (it seems too sensationalistic to be called a quip) is pure Dworkin: a ghoulishly creative melodramatic flourish that has little bearing on the matter at hand. Clinton may have acted sleazily, with a callous disregard for the emotional consequences of his actions on a young woman who was too naive and eager-to-please to grasp them herself, but no one suspects or has accused him of sadistically torturing her. Yet Dworkin was never able to enter into a conversation about morality unless the stakes were escalated to the stratosphere. The everyday realm where most of us commit our minor sins against, and injuries to, each other didn't really interest her. She only cared for the Grand Guignol.

Dworkin came out of and contributed to a subculture of feminism that specialized in this kind of irresponsible overstatement. A certain style developed: Throw out a handful of lurid, grisly anecdotes as if they amounted to an indictment of an entire class of people (usually men), who, if the worst of them can be shown to be guilty of such outrages, must all be equally responsible for them. The shock will soften your audience up enough to keep them from asking just how typical such atrocities really are and how widely condoned. Yes, they do happen, but like the handful of kidnapped little girls during the summer of 2002, such horrors can be made to seem epidemic when they're actually a rarity. Meanwhile, the much less exciting, if far more common, troubles of women who are simply trying to feed their children on inadequate wages, or get a decent job, fall by the wayside.

After this came the dodgy statistics, the one out of every four women said to have been raped in her lifetime, the alleged upsurge in domestic violence reports after the Super Bowl, and other mediagenic numbers. If these "facts" later turned out to be wobbly (or, in the case of the Super Bowl story, an outright hoax), many women's advocates rarely seemed to grasp the damage they'd done. After all, they were only calling attention to real, pervasive problems, which rape and domestic violence unquestionably are.

But here's the rub: If you get sloppy with the truth, then anyone who doesn't feel like dealing with those problems can happily devote himself to quibbling with your numbers instead. Does it really matter that much whether it's one women in four who will be raped, or one woman in 10? Or 20? It's still too many, and it needs to be stopped. Good luck getting that done while everyone's busy arguing about your stats.

The ravaged, bruised and mutilated women who parade through Dworkin's writings can seem as insubstantial as these numbers. As described by her, they're like the characters in an urban legend or campfire story, like the girl who finds the bloodied hook hanging from the car door handle. She tells their stories with an unseemly relish, and they're portrayed as completely and utterly helpless and abject, with no one to turn to but their equally brutalized yet indomitable champion. "Heartbreak" professes to be the testament of someone who has devoted herself to abused women, but the only three-dimensional human being who emerges from the book's Sturm und Drang is Dworkin herself. It's a mistake to equate a writer's work with how she lives her life, so let us hope that, in person, Dworkin managed to treat these women as more than rescue objects.

Perhaps in recent years Dworkin was pleased to see support for her own ideas in the theories of evolutionary psychologists who argue for the innate aggression of male sexuality, and even go so far as to suggest that men are born to rape. Probably not, though; she would have likely seen it as an excuse to go on raping. The very opposite of self-reflective, she never reconsidered her position on porn, so she surely never wondered what all the time and energy feminists spent on the "Sex Wars" of the 1980s might have accomplished if it had been redirected toward helping abused women gain the financial and emotional wherewithal to reclaim their lives. Her contribution to the discussion on most issues failed the ultimate litmus test: Even when she was right, she made the public conversation stupider. (Though some of her opponents, who could rarely resist ad hominem remarks about her appearance, surpassed her even in that.)

It's almost impossible to locate a real woman amid the towering phantom images generated by Andrea Dworkin's extraordinary life. It seems clear that she was very talented, and that she also suffered greatly, if exactly how and when is pretty hard to nail down. In recent years, the death of her beloved father and a murky traumatic incident in a European hotel seemed to sap her utterly. Her theories had become even more marginalized and it was getting harder and harder for her to publish in the U.S. Maybe the fight just went out of her. The constitutionally unforgiving (and Dworkin herself was among them) might hope that in the end she realized how much of that fight she'd wasted. The merciful will wish that she left what was for her an earthly house of horrors feeling vindicated somehow and finally free.