Management consulting is a giant fraud! OK, we knew that. But what Martin Kihn reveals in his entertaining new book is just what miserable lives these know-nothing "experts" lead. 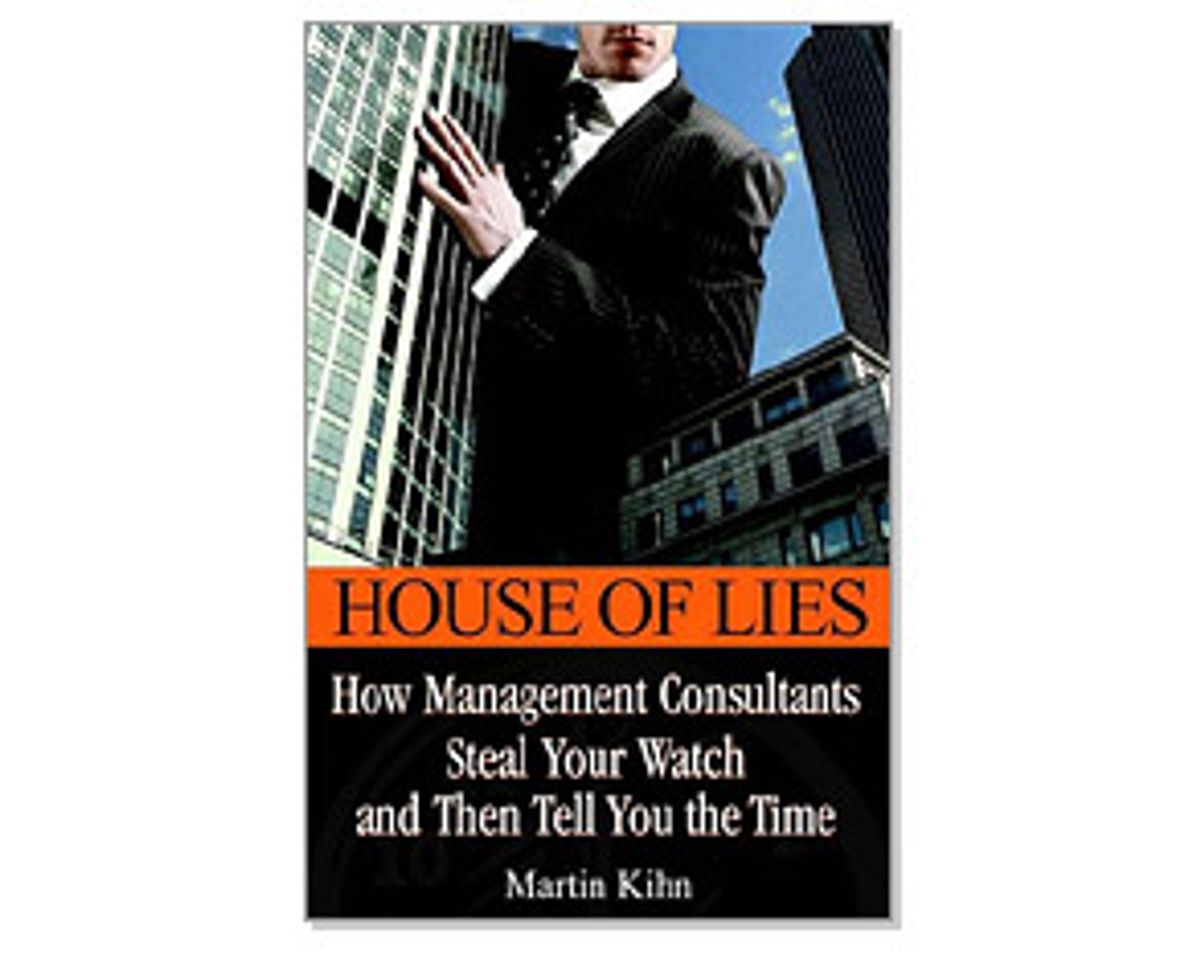 "Business books are boring," Martin Kihn writes early in "House of Lies," a book that, the inside flap informs us, the Library of Congress catalogs as a business book. But no matter; irony is Kihn's mitier. So let's let him continue the thought: "Business books are boring. They are bloated compendiums of half-baked ideas committed in fourth grade prose. Their purpose is to transform a commonsense concept or two into a consulting career through the catalyst of hollow jargon."

With this inauguration, Martin Kihn sets out to write the anti-business book business book. In Kihn's view, corporate America isn't the gleaming place you'll find in business strategy classics like "Built to Last" and "Reengineering the Corporation." The common-sense concept Kihn wants to convey regarding American corporate culture is that it has no common sense; in "House of Lies" business culture is arbitrary, illogical and humorless, and it's dominated by a set of leaders whose abiding talent is shameless trickery. These leaders are called management consultants. If you work for an American corporation of any respectable size, you've likely heard of them, though you can be forgiven for not knowing exactly what it is these people do. What they do is not quite clear to anyone, not even, it turns out, to the consultants themselves; how the business world suffers under their dominion is unknown, though it's obvious that the consultants themselves suffer untold indignities. We know this because Martin Kihn tells us so, and he knows it because several years ago, more or less accidentally, in the way that Gregor Samsa once woke up as a cockroach, Martin Kihn became a management consultant. Now, here, he's spilling his guts.

Kihn has good reason to be angry at business books. It was a business book, he suggests, that introduced him to the idea of management consulting, and therefore kind of ruined his life. Once upon a time, Kihn was a normal, likable fellow. At Yale, he wanted to be a poet. He loved the ballet. He married a musician. He wrote for Spy and GQ -- clever dispatches on Harold Bloom, Hal Hartley and David Byrne. Then he got a gig in TV, an improbably successful run as head writer on the seminal 1990s VH1 show "Pop-Up Video," where he was called upon to slap snarky bits of trivia onto popular videos of the day. This life -- the ballet, the wife, the job in TV -- doesn't sound half bad. Nice as it was, though, Kihn, like the rest of us, wanted more money. And one day, after picking up a business book by a management consultant identified here only as "The Rainmaker," a book that was so simply written it surprised him that it "could be sold in the grown-ups' section," Kihn hit upon an idea for cashing in. He would quit TV. He would go to business school. He would become a management consultant. How hard could it be?

Harder, and more bizarre, it turns out, than anything he'd ever imagined. "House of Lies" is being marketed as an exposé of the management consulting industry -- a tome designed, press materials included with the book say, to bring down the "mysterious and powerful people in America." In one sense, it lives up to that billing. Kihn does show that the whole business of management consulting is a charade in which neither the consultants nor the businesses who hire them profit from the arrangement. But Kihn knows that attacking management consultants for being superfluous is too easy a trick, like pointing out that Michael Jackson is weird, or that Maureen Dowd's columns are often loopy; we already know this. That's why he declares in his prologue that he doesn't really want to write an exposé -- instead, it's a cautionary tale. The real story here focuses on the damnable daily life of the modern management consultant.

Kihn's breezy, Jay McInerney-inspired writing style renders this drudgery precisely, often hilariously. It's the natural condition for corporate workers to hate management consultants. In the popular culture they're seen as arrogant, effete Ivy League SOBs who've never worked a day on an assembly line but who still want to tell the old-timers what to do, or whom to fire. The thing is, though, they probably work more hours than you, their jobs are likely more difficult than yours, and they've got to put up with more annoying people than you do, too. They get more money, but not that much more. At first, "House of Lies" seems to set out to make us hate management consultants; its subtitle is "How Management Consultants Steal Your Watch and Then Tell You the Time." But don't be surprised if Kihn's book inspires pity, if not respect, for these guys; they're a sorry bunch, and maybe it's time we were all a little nicer to them.

"To be a management consultant is to be always on the defensive," Kihn writes. Everyone's always asking the consultant who died and made him the expert. "What do you know about my business?" clients ask. And those taunts are "nothing compared to the utter, irredeemable, unknowing cruelty of one's parents, siblings, and friends when they ask -- as they always do -- quite coolly but not without a certain challenge to their tone: So, what do you actually do?"

"This is a wickedly difficult question," Kihn writes, "one that cannot, in truth, be answered." This seems like a cop-out at first, but as we move through the book it begins to ring true; in Kihn's narrative, there is ever less purpose to the consultants' existence. Consultants aren't hired for their expertise, Kihn points out. Nor are they hired for their ability to make strategic business decisions, or to offer recommendations to a firm that anyone will be expected to act upon. That's because, of course, consultants don't have much specialized knowledge in many of their clients' industries -- and so, for instance, because they don't know tires, they don't attempt to offer any specialized knowledge on tires, and any advice they offer will be ignored, because, well, they don't know what they're talking about. Consultants are often hired to search through and organize massive amounts of corporate data, but Kihn gives no indication that consultants are any good at such labor-intensive tasks. In the instances he describes, the consultants certainly don't succeed.

Kihn ultimately suggests in a moment of epiphany that the real reason firms hire consultants is stunningly simple, and ridiculous: It makes companies feel good. For the most part, it turns out, companies using consultants aren't doing all that badly (if they were, they couldn't afford the consultants). Firms that solicit the services of consultants are actually some of the biggest, richest corporations in the world, and they'd do fine without extra help. So why do they hire them? Because they can, Kihn says -- because consultants, like limos and fancy office parties, are a luxury, and companies like to indulge in luxuries. In Kihn's telling, consultants are like extremely well-educated corporate call girls. The clients don't care to listen to what consultants have to say; they just want to see them go through the motions.

Consulting, like prostitution, is one of those careers one chooses out of desperation; business students don't want to be consultants, but when they're done with their MBAs they pick up consulting as a short-term gig, something they think of as an easy way to pay off their student loans. In business school consulting looks glamorous -- the tragedy, Kihn says, is that the kids have no idea what they're getting into.

Though "House of Lies" is exceedingly smart and funny, over a couple hundred pages it also turns unsettling, depressing and tragic. The book is penned in the second-person ("I will not use that pronoun again," the book begins), a technique that brings the action close, smashing your face tight against the ugly goings-on. Kihn isn't saying, after all, that he attended Columbia business school after getting rejected by Harvard, and then joined an unnamed "top-tier consulting firm" after getting rejected by McKinsey (the topmost-tier consulting firm), and that, in the week after he started working at this firm, the dot-com crash roiled the business world and he watched the entire consulting industry implode in a haze of jargon and lies and incompetence. Kihn's story is that all this happened to you -- this could have been your awful life. Anyone is at risk.

Consulting is like prostitution in another way, too -- it's a surprisingly physically taxing exercise. Every Monday morning, the consultant departs for his client's far-off plant. He remains there, working day and night, with bad food, little sleep and no friends, until Thursday afternoon. So consuming is this nomadic routine that for the consultant travel arrangements become a constant obsession. "There is no topic of conversation more galvanizing, powerful, and useful among groups of top-tier management consultants than the accoutrements of travel -- hotel facilities, American v. United, Hertz v. Avis ..." To the consultant these things take on the quality of a religion; in an ever-shifting world, national airlines and chain hotels are all that sustain them.

Well, actually, that's not all -- they also have jargon, which Kihn points out is of an altogether different sort than that of most other professionals. Doctors or lawyers use inside words to exclude outsiders, while consultants' jargon "must exclude without being unapproachable," he says. Consultants' language "must function along very slender dimensions," Kihn writes, "creating a patina of authority while also seeming quite clearly to say something to the listener ..." Kihn draws up a dozen-page-long glossary of consultant jargon, many of whose words and phrases perform this double duty, excluding while not seeming exclusionary ("blue sky" for "brainstorm," or "bio break" for defecation).

But jargon is a poor substitute for actual language -- for talking, for fighting, for laughing, crying -- and such human expressions are nowhere to be found in the consulting world. Management consulting as Kihn describes it is in the end a chilling, lifeless pursuit, in which "unsolicited opinions are a one-way ticket to a counsel out," which is jargon for the pink slip. "Sacking is the payment for clear points of view ... No war talk, peace talk, tax talk, or talk show talk. No blather about Ireland, North Korea, southern Canada. No moments when frustration escalates, the rage appears upon the surface of your blood and you thwack! the team room table -- say, 'What an ASSHOLE!' No. No assholes. No whats. No frustration, escalation, genetics ... no rage."

Given the difficult lives consultants lead, and the dubious payoff for all of their efforts, you'd think someone in the American business community would have wised up already. You'd think consulting would be on the wane. But it's not. Though the industry shrinks during recessions, during boom time there's always more work for high-priced, useless outside advisors. The situation underscores the latent absurdity of the American corporate world. Business people, especially successful business people at huge corporations, are thought of as rational, serious, logical people. "House of Lies" shows you that business, like much of the rest of life, is ultimately a silly enterprise. All royalty needs court jesters; for the kings and queens of American business, consultants are necessary comic relief.