Aimed at the Bible Belt and piggybacking on Schiavo and the pope, NBC's creepy, pandering "Revelations" miniseries paints nuns as heroes and rationalists as the bad guys. 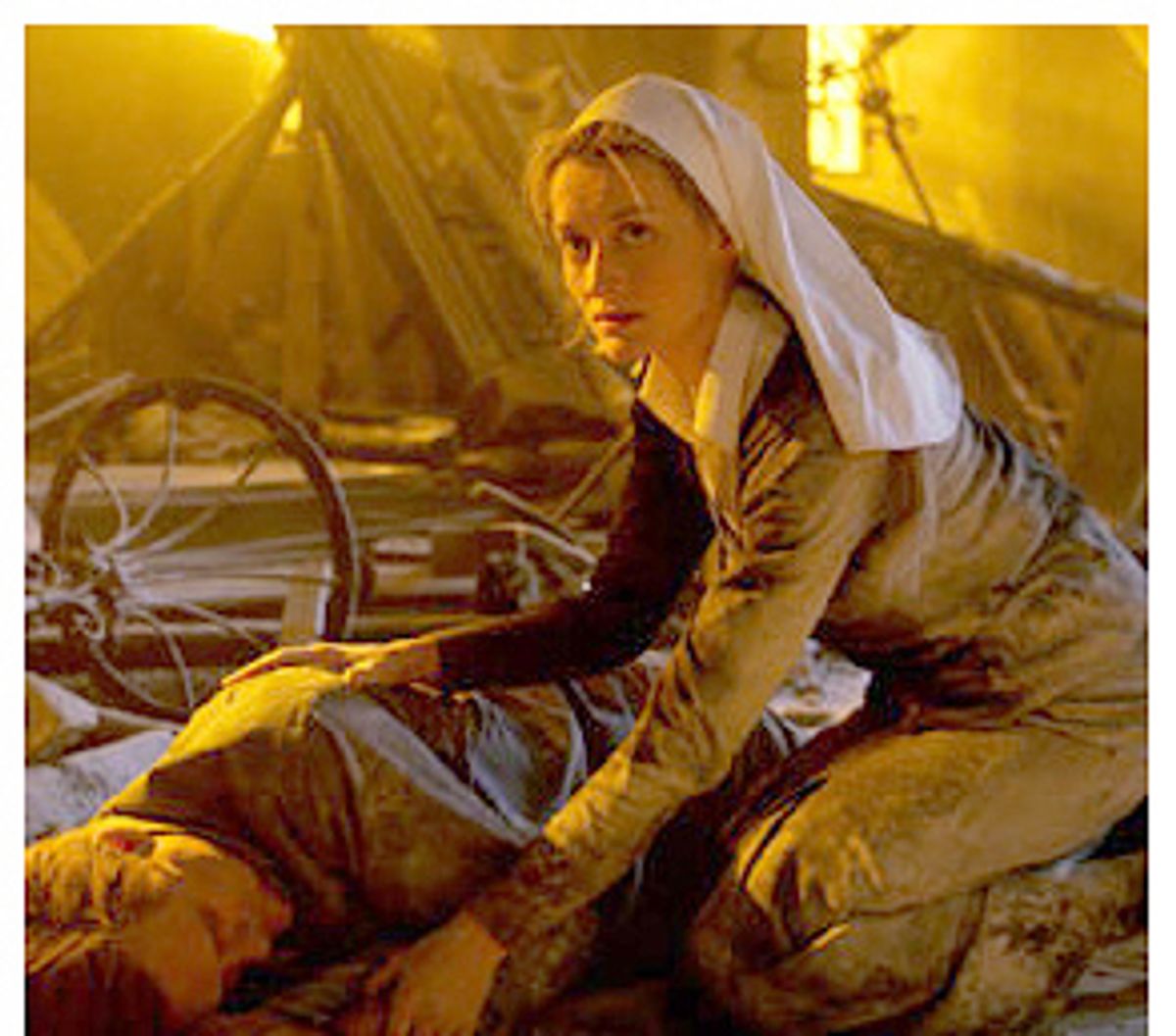 In a scene from the first episode of the six-part miniseries "Revelations," which airs Wednesday at 9 p.m. on NBC, several doctors are sitting around in an eerie hospital room, one that's even darker than those autopsy rooms on "CSI." Their faces lit from below like demons, the doctors confer about a comatose teenage girl who was struck by lightning, presumably for wearing low-cut pants. The assembled are anxious to "harvest" the girl's organs -- not to save lives, of course, but to make the hospital some cold, hard cash. The girl has been spewing lines of Scripture in Latin and drawing odd little maps whenever there's a thunderstorm, but the doctors aren't even curious about that. They just want her kidneys!

Doctor No. 1: So she is literally brain-dead?

Doctor No. 2: It's called a persistent vegetative state ...

Doctor No. 3: Which falls into an unfortunate area of debate. Right-to-lifers would claim consciousness in brain waves on a night crawler!

If this little snippet reminds you of any recent public debates, not to mention that scene from "Jesus Christ Superstar" where Caiaphas and the priests are plotting against Jesus, that's because doctors, scientists and realists -- or "devil's advocates" as our heroine, Sister Josepha, calls them -- are the clear enemies in "Revelations." While screenwriter David Seltzer claims to be a "science buff" and the teasers for the next episodes say that the endgame phenomena unfold "in a mystery that combines both Science and Scripture," it's clear who's on the side of the righteous here: The bright-eyed nuns and believers mounting a global search for Jesus not only speak in sweetly poetic verses, but have a hazy glow about them. Their scenes are warm and yellow and bright, while the hospitals and prisons and airports are cold and blue-green and populated by creepy strangers.

Welcome to the latest nugget in a hailstorm of fundamentalist invective, from "The Passion of the Christ," to Tim LaHaye and Jerry B. Jenkins' bestselling "Left Behind" series, in which skeptics and agnostics are left to fight for their lives against the forces of the Antichrist (centered in Baghdad, led by the head of U.N.), while true believers are whisked away to the comfort and safety of heaven like the lucky winners on "The Apprentice," whisked off to shop for $600 Jimmy Choo sandals at Bergdorf Goodman. All of the divine signs point to the same conclusion: The rest of us, it seems, are headed to the boardroom.

But what better way for NBC to round up a full month of hand-wringing and candlelight vigils for Terri Schiavo and the pope, than by ushering in a miniseries sure to capitalize on the fear whipped up by these two deaths, not to mention more terrorist arrests, the tsunami disaster, the war in Iraq, you name it? "All the signs and symbols set forth in the Bible are currently in place for the end of days," breathes Sister Josepha, and we believe her, because she looks like the Virgin Mary, except with cheekbones like Isabella Rossellini's. But is she talking about the latest tragedy in Baghdad, or the upcoming made-for-TV movie "Locusts"?

Like "Locusts," which airs Sunday, April 24, at 9 p.m. on CBS, surely "Revelations" is just another bit of crassly commercial entertainment to flesh out May sweeps, custom-fit though it may be for mass Bible Belt consumption. After all, Seltzer has been importing creepy Bible verse into the horror genre since he wrote the hit movie "The Omen" in 1976. As dark and foreboding as his series might be, Seltzer must have a sense of humor about it all.

"We're looking at 35 wars going on in the world, any one of which could become a flash point that would end our lives," Seltzer solemnly told a handful of reporters on a recent conference call. "And with all the geological-social-political events lining up with what the Book of Revelation says are the End of Days, it is time to start taking it seriously."

The fact that Seltzer takes Armageddon seriously won't come as a big surprise after a few minutes of his hopelessly grim tale. In one of the opening scenes, Dr. Richard Massey, a Harvard professor played by Bill Pullman, is riding in a plane across the aisle from Isaiah Hayden (Michael Massee), the man who recently cut out the heart of Dr. Massey's 12-year-old daughter in a Satanic ritual. While I'm guessing it's uncommon to share a flight with the man responsible for your daughter's brutal murder, it's certainly dramatic, particularly while the murderer hisses, as some turbulence kicks up, "It would be sad to go down now, wouldn't it, Richard? You going to heaven and me going to hell, before we really got to know each other?" After that, Hayden, who looks and sounds just like Willem Dafoe, snaps his fingers and the turbulence stops.

Next, we see Sister Josepha, an Oxford-educated religious scholar, in a crowd of wide-eyed worshipers, witnessing the shadow of a cross on a mountain, but nothing is there to cast the shadow. Jesus is on the cross, and turns his head toward the crowd! Ooohs and ahhhs! Before the crowd has time to paint their faces and do the wave, the shadow disappears.

Cut to the Adriatic Sea, where a baby is found floating on an aesthetically pleasing bit of wreckage, yet the rest of a missing ship has disappeared without a trace! The baby is whisked away to a Greek island, where more loving nuns thank God "for this child from the sea."

Soon afterward, a saucy teenager refuses her dad's request that she wash off the fake tattoo that peeks out from the front of her low-cut pants. Instead, she takes the name of the Lord in vain, then dashes out to the middle of a golf course in a lightning storm. Naturally, God strikes her down faster than he'd sic a chain-saw-toting loon on a pair of teenagers making out in the woods, and the girl ends up in a Miami hospital mumbling in Latin ("The world will pass away!") and drawing maps to Dr. Massey's house.

This draws Sister Josepha away from the Jesus pep rally, to Dr. Massey, but Massey isn't so sure he wants to help -- he's a scientist, a realist, a skeptic! But his resolve weakens when he discovers a little picture of a donkey in the corner of the girl's map, a drawing that matches a picture his daughter drew for him. Massey goes down to Florida, the evil doctors swoop through the halls of the hospital like Darth Vader, the girl almost dies. Then more saucer-eyed nuns arrive and Massey and Josepha are well on their way to fighting the good fight against the forces of evil and the end of the world.

Of course, if they were truly believers, they would welcome the world's end with all of their hearts, since it would mean that God would take over and the believers would get a free pass to heaven. But no matter. For all its pretensions about adhering to the Bible and science, "Revelations" is just another slice of shadowy, fear-mongering pap that will only annoy the informed -- Christians and non-Christians alike -- who recognize it as the emotionally manipulative, slanted fable that it is. It's the perspectives of the more suggestible and reactionary -- of which there are no shortage in this country, if the Schiavo circus is any indication -- that we have to worry about. Considering how inflammatory and rabble-rousing such a desolate view of the world's end might be to that faction makes "Revelations" all the more creepy.