Deregulation led airlines to shaft their customers -- and then go out of business! But the airlines that emerge from bankruptcy probably won't be any better. 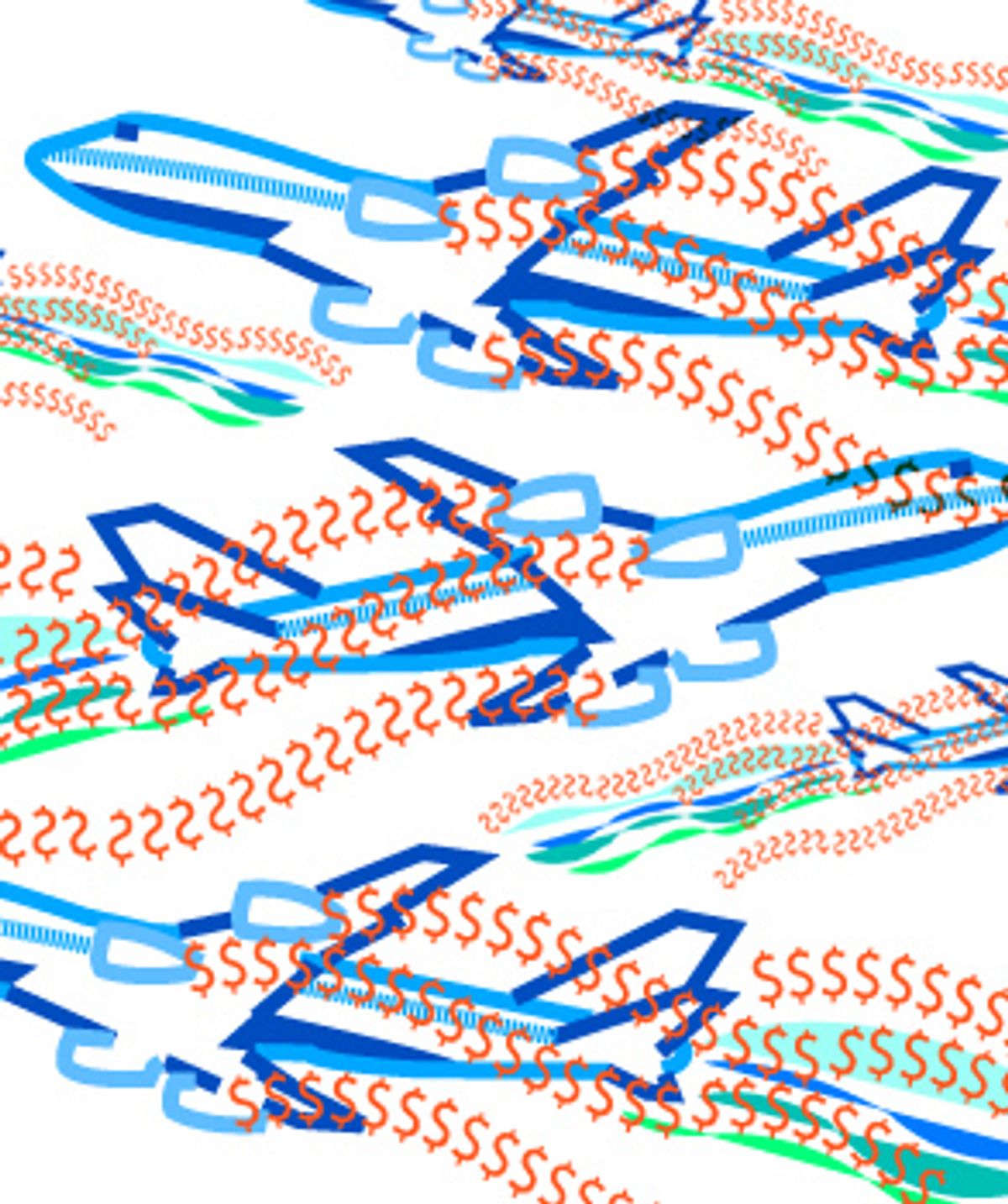 The impending demise of nearly every major airline -- U.S. Airways, Delta, United, Northwest and others are either in bankruptcy or near to it -- should fill travelers with joy, given the way airlines have treated us. Since deregulation unleashed the carriers' talons in the late 1970s, they have stuffed us into smaller seats and smaller planes, taken away perks ranging from meals to pillows, charged us capriciously and exorbitantly, routed us through cities we never wanted to visit, and instituted ridiculous requirements like mandatory Saturday-night stay-overs.

Unfortunately, there's no guarantee that any new airlines that might emerge from the financial wreckage of the current bunch will be any better. The industry has lost more than $30 billion since 2001, and high oil prices alone could lead to an additional loss of $5 billion this year. The nine largest U.S. airlines are expected to report first-quarter losses totaling at least $2 billion in the coming week. True, a few nimble airlines like Southwest and Jet Blue are making a profit by offering flights at reasonable prices with few restrictions. But they are still a small percentage of the market and they may stay that way.

The fault for this mess, dear tired traveler, lies not with the airlines but with those who allowed politicians to deregulate the airlines a generation ago. President Jimmy Carter and his Civil Aeronautics Board chairman, Alfred Kahn, pushed through deregulation in 1978, when I was a freshman in college. A generation later -- my entire professional life -- I am still waiting for the magic era of easy flying that fans of deregulation promised a free market would bring.

Before deregulation, airlines competed mostly on the freshness of their cocktail nuts because the Civil Aeronautics Board dictated their routes and ticket prices. This seemed a little strange, so economists and policy wonks proposed "marketizing" air travel -- that is, allowing airlines to compete head-on. They thought this would give consumers lower prices, more direct flights, more airlines to choose from, and simpler ticketing and flying requirements. It seemed like a good idea at the time.

But contrary to predictions, deregulation has actually led to fewer direct flights, fewer airlines, less predictable prices, costly restrictions -- and, not incidentally, the financial ruin of nearly every major carrier. Analysts estimate that the airlines have collectively lost more than $50 billion since deregulation began. True, consumers have gotten lower prices on some flights, but only at the cost of astronomical prices on others and a rash of new restrictions and conditions.

Despite all this, commentators in the media routinely hail deregulation as a great success, even as they acknowledge a lot of rough spots, which they assert the market will eventually sand off. The latest round of airline troubles have some predicting that the long-awaited era of mostly Southwest-style carriers competing by offering easy flying at low prices will soon arrive.

That's unlikely, says Robert Kuttner, editor of the American Prospect, who examines airline deregulation in detail in his 1997 book "Everything for Sale: The Virtues and Limits of Markets" -- in a section called "A Failed Experiment."

"There are two ways to think about the current situation," says Kuttner, in a telephone interview from his home near Cambridge, Mass. "One way is that the wave of [airline] bankruptcies and the hemorrhaging of money are the last gasp of the dying dinosaur of an industry that took a lot longer to put out of business than the deregulators thought, and we are now heading into a new era of low-cost, competitive airlines.

"The other theory is that this history proves that airlines are not a naturally competitive business, and that the steady track record of business losses and the screwing of customers are just going to continue if they try to run [the industry] as a deregulated business."

Whatever the future holds, it's worth looking back to the past to see just how little has gone as planned. Believe it or not, deregulation was supposed to make flying not only cheaper but simpler. It was meant to spawn more airlines like Southwest, a company that predates deregulation, and at first, the idea seemed to work. I remember flying from my hometown of Norfolk, Va., to New York City in 1984 for $19 on People Express, which introduced the novel technique of collecting payment onboard. But the larger airlines managed to kill off that consumer-friendly airline with predatory pricing.

Once it and other upstarts were bumped off, the established airlines, those that didn't go bankrupt, began merging into the oligarchic cartel that controls flying today.

One of that cartel's worst innovations was the "hub" system, in which airlines route many or most of their flights through a single city. At first, it's difficult to understand the benefits of hubs to airlines. After all, whether you're flying or driving from Omaha, Neb., to Kansas City, Mo., the quickest and cheapest way to go is in a straight line. It would cost airlines less on fuel to fly people directly to major cities because such flights generally use larger planes (which consume less fuel per passenger), not the smaller, less fuel-efficient (and less comfortable) planes that tend to be used to and from hub airports. So why do airlines like hubs? Because they enable them to carve out regional monopolies and then charge higher fares. Airlines essentially conquer a major airport, and then keep out competitors.

A 2001 General Accounting Office report found that one airline was dominant at 16 of the largest airports -- places like Atlanta, Cincinnati, Detroit, Denver, Minneapolis, Pittsburgh, St. Louis and Salt Lake City -- and in nine of those, one airline controlled more than 90 percent of the originating flights.

A powerful hub airline can obviously get away with treating its best customers pretty cavalierly. As of April 10, U.S. Airways was charging customers $2,071 to fly economy class midweek from its hub in Charlotte, N.C., to Los Angeles and back without a weekend stay-over, even for a ticket bought weeks in advance. But in Greensboro, N.C., a two-hour drive away, U.S. Airways was charging only $330 for the same journey -- even though passengers change planes in Charlotte. How could this be? Because the carrier faces more competition in Greensboro, it drops its prices, even though its costs are higher. Scenarios like this are common in Cincinnati, Minneapolis and other hub cities.

Perhaps I'm dwelling too much on the negative. For people who live in or close to cities like Houston and Phoenix, where low-cost carrier Southwest dominates, flying is often pretty good. And in other cities, if you can jump through all the airlines' hoops, you can often get some decent prices. Several studies have, in fact, concluded that prices on average have decreased 30 percent since 1978.

The problem is, averages mask the absurdly high fares many fliers are forced to pay. More important, such analyses don't calculate costs other than ticket prices resulting from deregulation -- such as the very real cost of millions of passengers having to spend Saturday nights away from home unnecessarily, of not being able to make last-minute plans, of shrinking legroom (and the attendant medical effects), of unused nonrefundable tickets, or of driving far from home to get a decent fare. Not to mention how unpleasant flying has become.

Under regulation, the big airlines regularly bought newer and more fuel-efficient airplanes, which translated into lower ticket prices for passengers. But under deregulation, financially troubled airlines could seldom risk spending billions for new planes that would be delivered years later. That's why many planes in the sky today are dangerously old. I suspect that's also why Boeing has declined as a company in recent decades, while the European conglomerate Airbus has thrived. Before deregulation, U.S. airlines bought a new fleet of Boeing planes every few years -- which gave Boeing the freedom to innovate and compete commercially.

Although regulating the airlines would be an easy way out of this mess, that is probably not politically feasible, at least until voters change the president and the composition of Congress. Another route would be for the federal government to start using antitrust and other laws to end the blatantly anticompetitive practices of many airlines. For example, the government could set minimum and maximum fares on particular routes and pry open hub airports from the grip of one airline.

But for any of this to happen we need to change our thinking. We must accept that air travel, like highways and rail lines, are not ordinary economic goods like sneakers or shoelaces, for which a free market makes sense. Our transportation systems, be they airports, highways or rail lines, are really more akin to our schools and universities, which, along with transportation, most societies have historically subsidized for two reasons. First, excellence in both of these areas brings societies more prosperity overall, and second, both are very difficult for a private company to make money on.

U.S. Airways, Delta and all the rest may soon crash into the hills of financial ruin, or they may right themselves to some wobbly version of fiscal health. But their passengers won't get a better ride until our nation decides to manage air travel more assertively -- and not leave it all to the market.

Alex Marshall is the transportation columnist for Governing magazine and the author of "How Cities Work: Suburbs, Sprawl and the Roads Not Taken."