While others argued, Marla acted. She gave her young life to help the innocent victims of the Iraq war. At 28, she represented the best of America. 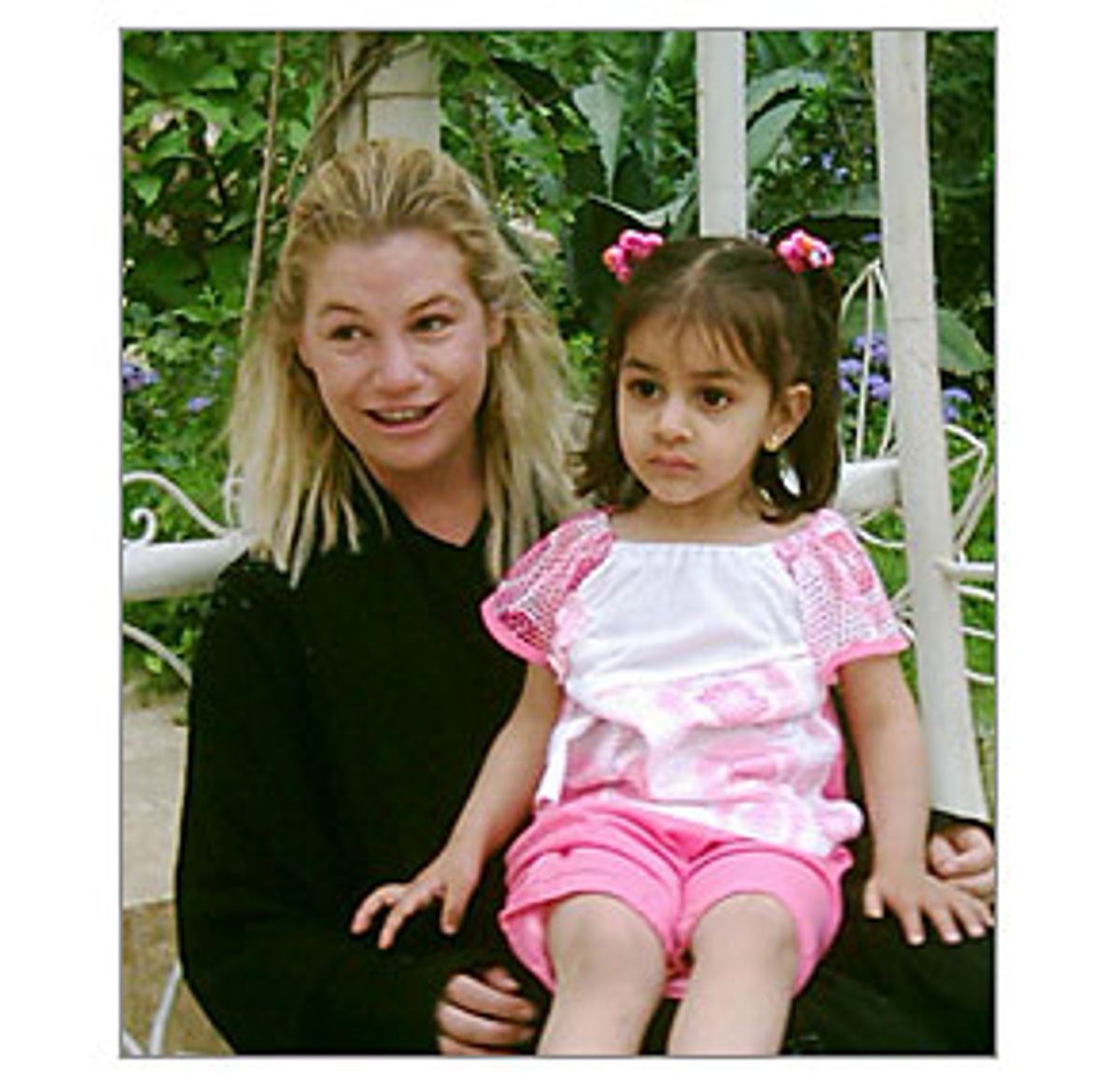 This is a eulogy of a thousand words that should really be a poem. It's one I never thought I would write. In Iraq on Saturday afternoon, around 3 p.m., a suicide bomber entered Baghdad Airport road, heading east. On the same stretch was a U.S. military convoy, an Australian security detachment, and a car that carried U.S. aid worker Marla Ruzicka and her colleague Faiz Ali Salim. When the bomber detonated his explosives, Marla and Faiz were among those killed, and with that terrible act, the bomber cut short the life of a tireless champion of the victims of the war.

Marla Ruzicka founded the Campaign for Innocent Victims in Conflict (CIVIC) in 2003, an NGO that began as a one-woman operation and grew to include dedicated Iraqis who compiled statistics of Iraqi civilian casualties. It was a difficult, heart-wrenching job. Marla pursued the casualty figures by going door to door in a country that sent so many other aid agencies over the brink. Human Rights Watch works in some of the most dangerous countries in the world. But it does not have field offices in Iraq.

Marla was amazingly cheerful about the dangerous situation. Unfazed by the weight of paranoia around her, she continued to travel around the country, even when her American citizenship made her a target. Looking back to the time we spent in Baghdad last summer, when I was covering the conflict, I can't remember Marla ever talking about being afraid. This was during the height of the insurgency in Sadr City, a brutal time, and I can't remember a single instance where Marla said she was scared. It doesn't mean she didn't feel it. But fear wasn't something that slowed her down.

I remember Marla throwing salsa parties, inviting all of us to gatherings at the Hamra pool, encouraging us to crash other people's parties. Marla was the activities director on a cruise liner in the most hellish seas, and she knew how to dance. All of us, and I mean the hundreds of people in the press corps, loved her. But we were just the beginning of the story. Marla was as open and gracious with Iraqis as she was with Westerners. Who knows how many are grieving for her now. I thought she would never get hurt out there, a superstition that bad luck was for others and would just take a detour around someone like Marla. Rita Leistner, a photojournalist who knew her, wrote me a message this evening: "I think it's possible that she didn't have a single malicious bone in her body."

Above all, Marla Ruzicka had a mission. She believed deeply that the families of civilians killed by the U.S. should receive compensation. She forcefully argued that the U.S. government had a duty to all innocents injured by its weapons, especially children who needed urgent medical care from decent hospitals. These simple principles cut straight to the heart of our collective responsibility during wartime.

She lobbied Congress, raising the most uncomfortable questions about our involvement in Iraq, and then demanded justice for the people forgotten in government policy. She won. Tens of millions of dollars were set aside to assist Iraqis who were the victims of the war.

But Marla didn't stay in Washington. How many innocent people have been killed by U.S. forces? Marla wanted to know the answer to that ugly question and so she returned to Iraq. She started looking for the truth by going door to door in Baghdad, taking a survey. She just started asking Iraqi families how many people they were missing. Of course, it was so simple -- this was her human approach.

Marla spent a great deal of time trying to help Iraqis who lost family members to the war. During the first siege of Fallujah, I once found her screaming at the director of the Iraqi Red Crescent, demanding that he organize a way to bring supplies to refugees. She was furious at his apathy. It drove her crazy.

Marla told me how hard it was to try to wring compensation payments from the U.S. military and what it was like to lobby Congress for Iraqi civilians rights. To get her projects through, she described to anyone who would listen the cases of injured Iraqis and the families of those killed. She would lean on her point, even when surrounded by experts who were supposed to know the deal.

Marla also understood the power and the responsibility of the press because she thought we could help her save people. It was all true. Charming and relentless, she sought out reporters to pick up her stories, she got her quotes in print and on television. I was one of the lucky ones who learned about her projects by hearing her describe them in her own voice, her lilting California accent that camouflaged her determination and bravery.

Marla also had a wild messianic streak and was beautiful in the way girls from Northern California are often beautiful, with blond hair and clear eyes. Around the time I first met her three years ago, I was coming out of a U.N. press conference in Kabul. It was dusk and we were on the grounds of the Hotel Intercontinental on a high hill, surrounded by deep ditches. Marla was talking to me about something and I was so hypnotized by her otherworldly style, I walked right off the edge of a 15-foot cliff. When she finally found me in a gully, she didn't laugh. Anyone else would have died laughing. She was concerned and thought I was hurt. "Oh my God. Are you OK?" she yelled. I had just become an innocent victim of a cliff -- and one of her fans.

This is not a hagiography. Marla had her rough spots like anyone. She was emotionally vulnerable but her projects gained strength and she never gave up. What more can you ask of someone?

Here is one of the great things about her. In a divided nation, when so many idealistic young Americans chose a side as if it were a football team, picking the partisan fights and slugging it out over the dinner table, Marla chose the war instead. It would be her stage. She bought a ticket, organized her visas and went to Afghanistan and Iraq to see it for herself. In the end, she knew more about the true nature of conflict than any analyst in the United States, more than the president himself. If Marla's methods were unorthodox, it's because the war couldn't be handled the normal way. It needed her personality and her style. Her heart was pure.

I ran into Marla all over the world. I saw her in Afghanistan, Baghdad, and recently in New York City. We were on some kind of strange trajectory that meant we were always running into each other. I took this to be part of her magic and came to expect to see her all the time because her territory was the entire planet.

In late March, over dinner at a place on the Lower East Side, the day before she left for Iraq, Marla was talking about a medical evacuation case with my friend Chris Hondros, a photographer for Getty Images. Chris had recently photographed a checkpoint shooting in Tal Afar, where the mother and father of an Iraqi family were killed by American soldiers. One of their orphaned children, a young boy named Rakan Hassan, had a bullet in his spine and needed medical care that he couldn't get in Iraq. As Marla and Chris talked about how to get Rakan surgery so he could walk again, I witnessed Marla in action, plotting and scheming in her ingenious way. She was planning to work on Rakan's case from Iraq and left for the Middle East as soon as she could. The moment she arrived, she wrote to her contacts in Washington and the State Department in Amman, Jordan.

We are working to get a little boy medical treatment in the U.S. We have a doctor who will treat him in San Francisco, but he needs it ASAP. He has a visa and we have his costs secured -- is there any way we could get him a humanitarian visa? Karen is there, any way the State Department in Baghdad could help with this -- if we don't get him treatment soon he may never be able to walk again. Thanks, Marla

See how she goes straight for the gut. Marla then received a long bureaucratic reply from the embassy that detailed what she would need to do to get an appointment. It made her mad.

hi we have a medical emergency -- is there no compasssion? can we have the department of state help?

The diplomats replied with information that was more personal and to the point than any that ever comes from the government. Marla had called on their humanity and sympathy and won. They pledged to see the boy as soon as he made it to Amman. "The little boy must come to Amman a.s.a.p., and once he is in Amman, write me again and I will set up an appointment for him the very next day," the diplomat replied. "In the email, give me the child's full name as it appears in his passport, his passport number, and a copy of the enclosed emails."

Marla had broken through to them. She was brilliant that way. Reporters are now writing about how she became an innocent victim of the war, just like the people she championed. I know that is true because she was certainly innocent. But at the end she wasn't a powerless victim. She had already won. She fought cruelty and bloodshed and indifference. Marla Ruzicka was a true enemy of war and she triumphed over it again and again with every person she helped. The last thing she said to me that night in New York was, "You know, Phillip, I'm trying to save the world."