It's white smoke and mirrors, as TV news offers its most boring, useless coverage of the new pope, devoid of issues, agendas -- and even Nazis! 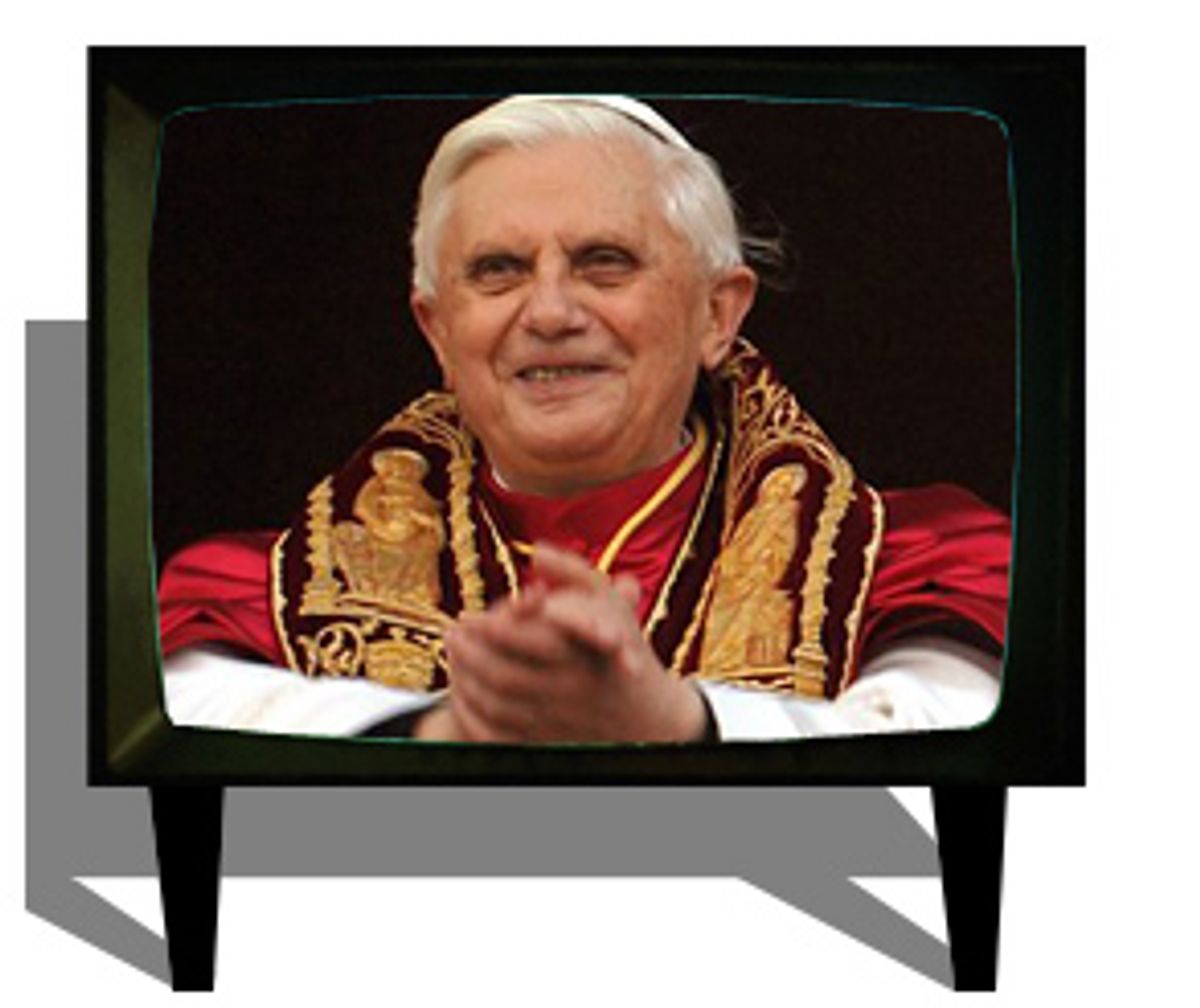 From the second the white smoke started to rise above the Sistine Chapel, the network talking heads were working themselves into a lather over the announcement of a new pope. But even after spending several minutes analyzing the color of the smoke wafting out of the chimney at the Vatican, NBC announcers were still skeptical. "Vatican radio has pronounced this smoke black," one commentator said, "but the crowd is cheering as if the smoke is white." But if the smoke was really white, weren't they all promised that there would be bells, too? Why were there no bells?

Those Catholics sure do know a thing or two about how to build suspense. Now, they were tech-savvy enough to text-message reporters when Pope John Paul II died, but not this time ("Nu pope 2 B named!"), preferring the weightier allure of antiquated signals shrouded in mystery. They cleverly waited for the crowd's anticipation to build to a palpable clamor before sounding the bells. Fox News demonstrated less appreciation for nuanced indicators, favoring a big gold font alternately blaring "Habemus Papam!" and "We Have a New Pope!" (the English translation, to aid Fox viewers) as close-ups of bystanders in Vatican Square, ranging from teary-eyed to indifferent, flashed across the screen. The talking heads only seemed to see those overwhelmed by emotion, describing the crowd as everything from "extraordinary" to "delirious" and "ecstatic."

Recognizing that, without stuff moving on-screen, most Americans were bound to fall asleep or change the channel, CBS had a rotating 3-D coat of arms with the names of the popes scrolling next to it. Meanwhile, Bob Schieffer shot a steady stream of questions at an assembled gaggle of priests and scholars. "What's going on inside?" he asked, and no one seemed able to answer. "What's been going on for the past couple of days? Do they actually make little campaign speeches for the people they're for? How do you do this? How do you advance your cause?"

Since speculation wasn't enough, CBS offered an animation of what might be happening inside the Sistine Chapel, taking us from the stove where they burn the ballots to the room where the pope puts on his brand-new vestments. "Now what they're probably doing is they're just making the final adjustments on those [papal] vestments so the pope appears here, at the balcony above St. Peter's Square, looking somewhat like the clothes fit him," offered John Roberts. Having prattled on as long as he could about vestments, Roberts searched desperately for something to fill the dead air, asking the Rev. Paul Robichaud, "What type of pope do you think cardinals were looking for as they went into this conclave?" While we half expected Robichaud to reply, "A pope with a brilliant red head of hair and a nice personality," he instead informed us that, most of all, the cardinals were intent on finding a "man of prayer." Oh! So, someone like Ja Rule?

Finally, the red curtain in the balcony on St. Peter's Basilica parted and the name "Cardinal Joseph Ratzinger" was announced. The news anchors were silent, hoping for more of a surprise, or maybe a Roman pope -- a home-team win sure to work the crowd into a genuine state of rapture.

Then Ratzinger, who chose the name Benedict XVI, addressed the crowd in Italian. "Dear brothers and sisters, after our great pope John Paul II, the cardinals have elected me, a simple, humble worker in God's vineyard." Nicely put, and yet, with all of the pomp and circumstance of the day -- the unfurling of banners, the smoke, the bells, the cheering hordes -- the 265th elected pontiff hardly appeared simple or humble.

"I am consoled by the fact that the Lord knows how to work and how to act, even with insufficient tools, and above all, I put myself in the hands of your prayers," the new pope continued. Was he consoled that the Lord had made a good choice for the new pope? Was he referring to himself or to the other cardinals as insufficient tools? The assembled experts had nothing to offer on this front and refused to comment on his stint as a Hitler Youth or elaborate on the conservative comments at Pope John Paul II's funeral and also before the conclave, when he spoke out against moral relativism and godless modern trends that must be rejected. That certainly makes him sound more conservative than the conservative Pope John Paul II, even if they were said to be similar. Which godless modern trends was he referring to? Cohabitation and birth control, or pagers and iPods and cellphones? (Andrew Sullivan enlightens here: Watch out gays and women -- and Turks, too.)

CNN's man on the street, Alessio Vinci, not content to simply bask in the tears and the ecstasy, asked a Catholic priest from Germany, "Do you think this is the pope that we needed at this time?" Herman's answer pretty much summed up the Catholic Church's approach on such matters: "If the Holy Spirit picked him, that's probably the one we needed."