Judith Warner is making me wonder: Am I stressed out enough to be a good mother? 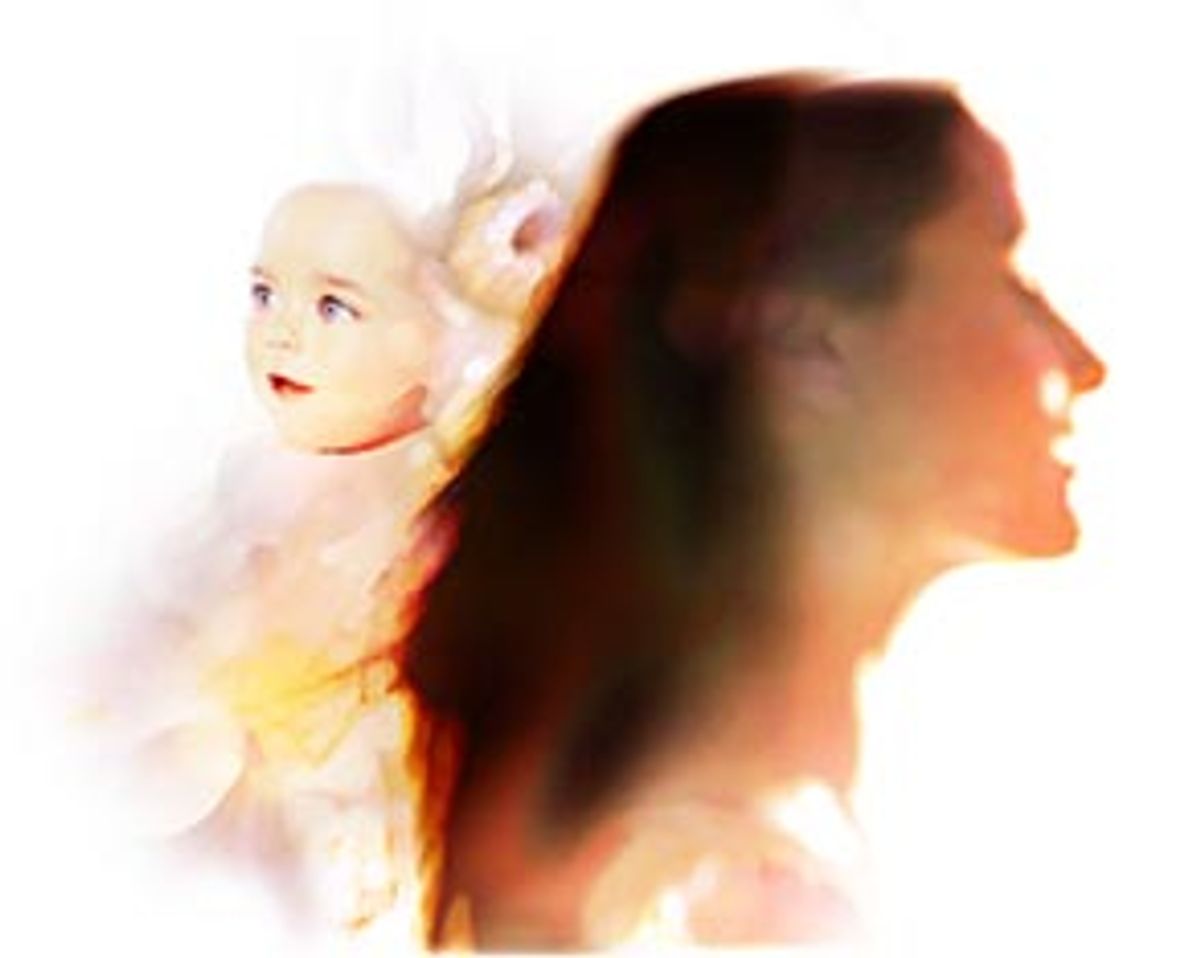 Generally speaking, I am not a mellow person.

I update my checking account daily on Quicken, sometimes printing out spreadsheets so my husband can see the precise percentage of our income that goes to Target and CVS. Instead of old copies of the New Yorker, my bathroom reading of choice is the Merck Manual, which I scan for lists of symptoms -- just, you know, to be on the safe side. While sitting in the subway, I've already gotten my $2 ready to purchase a grande coffee at Starbucks; in the line at Starbucks, I'm already searching for my work I.D.

So when I first got pregnant, I anticipated spending most nights nervously craning over my child's crib to check if she was breathing, and studying milestone charts with the rapt attention of a Benedictine monk. I actually looked forward to having the freedom to obsess frequently, loudly and without shame. Then something unexpected happened: Once my daughter Bryn was born, I found that she was the one thing in my life I didn't worry myself sick about.

Finding this oasis of calm couldn't have happened at a less appropriate cultural moment. Although it's long been an axiom that good moms worry, it's only lately that anxiety has become a requisite part of the job description. More than ever, your success as a mother -- as judged by everyone but your own offspring, anyway -- appears to be directly proportional to the intensity of your hand-wringing. On TV, "Desperate Housewives'" Lynette Scavo (played by Felicity Huffman), supposedly the most relatable mother of the bunch, is neurotically fixated on what private school her kids attend and which parties and play dates they're invited to. Michelle Herman's new memoir, "The Middle of Everything," details how her perfectionistic mothering may have contributed to her daughter's having a nervous breakdown by the age of 6. And, of course, Judith Warner's bestselling book, "Perfect Madness: Motherhood in the Age of Anxiety" -- which was deemed enough of a bellwether to be featured on the covers of both Newsweek and the New York Times Book Review -- chronicles the impressive diversity of maternal angst, ranging from big-picture worries over child care and an increasingly winner-takes-all society to, well, the undeniably pressing question of birthday party decorations.

Why so many worries, both large and almost insanely trivial? "All of these things we do bespeak a terrible anxiety," Warner writes, "that our children simply will not be able to make it through life if we do not perform totemic acts to keep them on the path toward self-perfection, and keep their lives pure and unfettered by distracting emotion, personality foibles or less-than-ideal experiences." Frankly, despite the book's good intentions -- Warner never endorses anxiety, and in fact she repeatedly exhorts women to chill out -- reading it gave me the same deep fish-out-of-water unease as I had when I'd tried (and failed) to learn Lamaze breathing. By not hyperventilating over my child, was I the lunatic on the fringe?

I'd been mellow from nearly the moment Bryn was conceived. When I learned that she had a marker for Down syndrome, I was initially concerned, but once I did the research and realized her actual risk of having the condition was less than 1 percent I was able to put it out of my mind. When she was a few months late to crawl, late to walk, late to talk, I'd think, Eh. She'll be fine. (She was.) Even when she hit the chatty age of 3 and began trying to make me feel guilty about going to the office every morning ("Bad mommies work," she intoned one day, as though she'd been spending her afternoons surfing the Independent Women Forum's Web site), it didn't take. I swallowed hard, responded, "You like to eat, don't you?" kissed her on the head and hopped on the subway. And I really, truly let it go.

I can't totally explain why I've been able to compartmentalize as efficiently as I have, though I have a few theories. During the first year or so of Bryn's life, my husband was laid off and subsisted on unemployment; I left a job that made me miserable; and we moved to two different states where we knew virtually nobody. I had every right to fall apart, but things were too genuinely dismal to allow for that luxury. So when I worried, I spent my time on immediate, urgent issues: Our health insurance policy expiring, for example, easily trumped "Bryn watched too much Baby Einstein today."

I also credit my mother, as unruffled a parental influence as I could have had. She spent most of my childhood trying to get me to worry less, assuring me that a score below the 90th percentile on the Iowa Test of Basic Skills would not mean I was a failure in life; even encouraging me to drop advanced-placement French in my senior year of high school so I could maybe "have a little fun for a change." I always admired her philosophy, even as I spent most of my life ignoring it. Perhaps I absorbed her lessons more than I knew.

None of this is to say I don't get frustrated and overwhelmed on a daily basis. If I've had a long day at work, I'm none too Zen about watching Bryn massage a slice of cheese into the living room rug. I'm hardly a model of serenity at 2 a.m. when she haughtily announces, "Me's. Not. Sleepy!" But those are just the everyday hassles of dealing with a toddler. And in fact, I do grow concerned about Bryn's future whenever I read an article about the cost of future college tuition or unprotected nuclear reactor pools. But Warner details a level of neurosis among mothers that can seem nearly pathological: "We feel we can erect a protective force around our children," she writes, "sheltering them against fat, lack of focus, immaturity, lack of muscle tone ... failure." In Warner's upper-middle-class, striver's world, if you're trying to be a great mom, you're roiled by anxiety; if you're mellow, you must be French.

I have no doubt that Warner's interview subjects and the others who've voiced their angst exist in large numbers. (In fact, I know they do: I've met them at the playground. They're the moms who, when I tell them my daughter is in day care, look at me with horror as though I'd said I tie her to the subway tracks every morning.)

On occasion, I've even tried to participate in anxious venting with other moms, just to be social. I've pretended to wrestle with the moderate amount of Noggin my child consumes. I've feigned concern when a friend told me that she lies awake at night worrying that her daughter's baby sitter's boyfriend will sell her into a kiddie porn ring. It seemed nicer than asking her if she'd considered taking antidepressants, but by faking worry, I feel like I'm betraying a silent pact I've made with Bryn. By not stressing needlessly about my daughter, I feel like I'm passing on to her the gift my mother gave me -- the realization that you don't have to learn Mandarin and swim by the age of 4 and score perfect SATs and go to Princeton in order to have a meaningful life. I have no illusions that fretting about my daughter's extracurricular choices will somehow make the world less chaotic or frightening.

I think there are more of us out here than the culture acknowledges -- maybe because just getting along day to day isn't nearly as interesting as being a mess. And maybe because a lot of us don't have the disposable income that might allow us to obsess over whether we should call a parenting coach for tips on potty training. But for every friend who weeps over her inability to replicate Martha Stewart Kids projects at home, several others take their own human foibles and imperfect circumstances in stride. I know a set of parents who are having their second son, without benefit of a third bedroom, much less a full set of Pottery Barn Kids furniture. There are even recovering worriers: Gillian, 36, told me she'd been a huge stressball about her now 2-year-old daughter, Olivia, until she reached a certain point in which "I realized how stupid and unproductive that was. And so I just stopped."

This year, Bryn didn't have a Moon Bounce or a clown for her birthday. Because it falls just three weeks after Christmas, I hadn't pulled everything together quickly enough for even a low-key party. Instead, she and I decided to bake a banana cake together. We chose the recipe out of a magazine, shopped for the ingredients together at the corner bodega, and spent a long snowy afternoon mixing the batter and baking it in the oven. There were no elaborate parlor games, no goody bags. We just blew out the candles and gorged ourselves on buttercream frosting. It was perfect enough.