Douglas Adams fans, anxiously awaiting "The Hitchhiker's Guide to the Galaxy" movie, debate how to express their passion for the sci-fi novelist without looking like nerds. 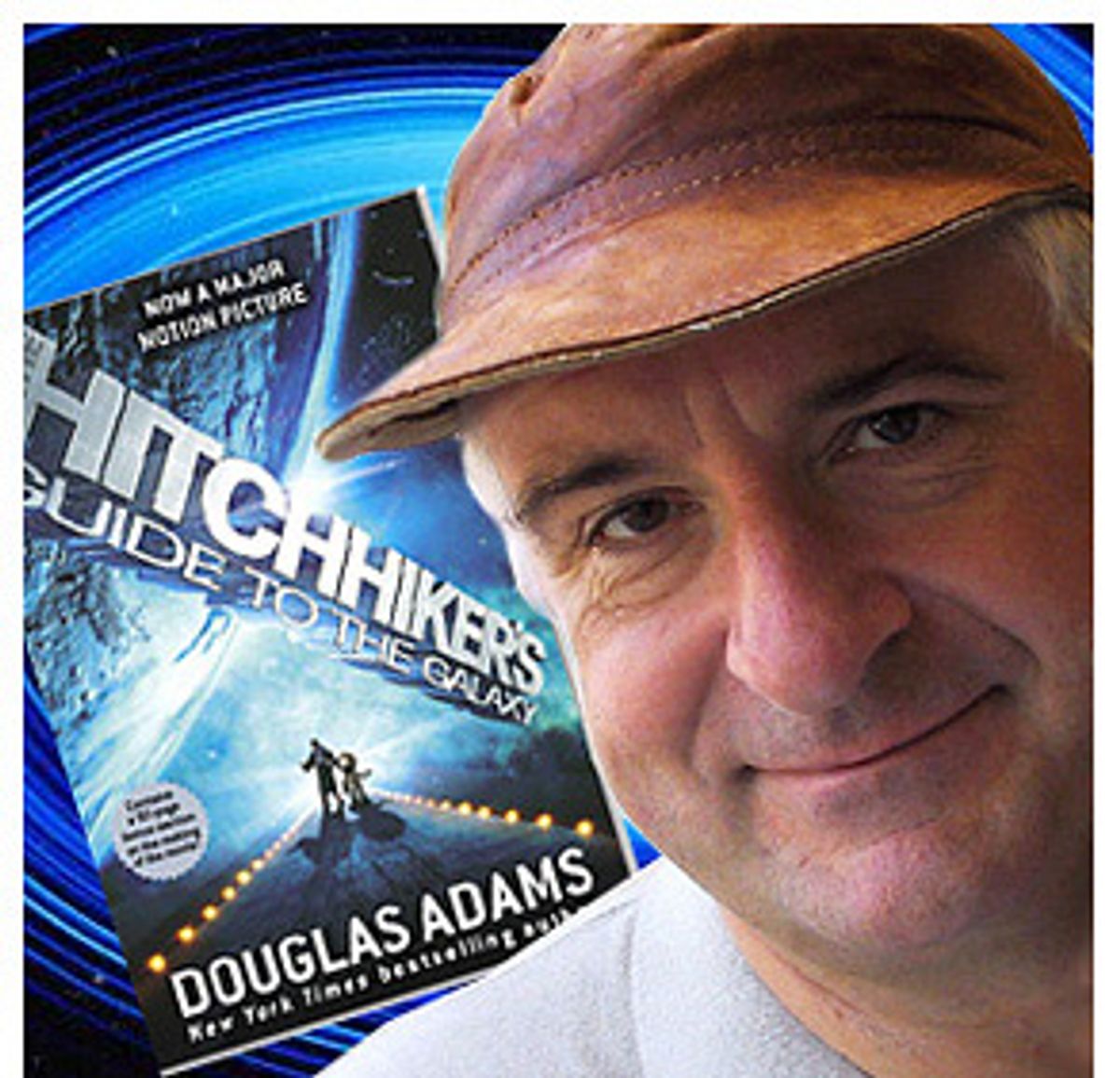 While you're scanning the listings at your local multiplex, pondering whether to see "The Hitchhiker's Guide to the Galaxy," which opens Friday, other moviegoers -- longtime fans of the "Hitchhiker's" book and radio series on which the movie is based -- will be mulling a different dilemma. Seeing the movie on opening night is a no-brainer for devotees, who have devoured every version of the series for more than 25 years. The real question is: Should you bring a towel?

For those not acquainted with "Hitchhiker's," don't panic. The towel won't be used for the same reason it might be at, say, a Gallagher performance. It's a nudge and a wink to other fans that you're a "Hitchhiker's" lover, one of many around the world whose lives were changed from reading the book. (In "Hitchhiker's" terms, a towel is "about the most massively useful thing an interstellar hitchhiker can have." As Adams wrote, it comes in handy for sleeping, sailing and waving in distress, and any non-hitchhiker "will think ... any man who can hitch the length and breadth of the Galaxy, rough it, slum it, struggle against terrible odds, win through and still know where his towel is, is clearly a man to be reckoned with.")

Yet, some fans worry that toting a towel to opening night might send a different message altogether -- namely, that you're a nerd, someone who has been anticipating this film for years, perhaps decades, and you're bringing what is essentially a prop to a public arena to announce your devotion to a book you first read in junior high.

And so, on online message boards and beyond, the debate rages.

For those not in the know, "The Hitchhiker's Guide to the Galaxy," the first in a series of books that included "The Restaurant at the End of the Universe" and "So Long, and Thanks for All the Fish," was published in 1979. Douglas Adams, its author, had crafted the books out of the radio series he created for BBC radio, and a BBC TV series followed later. The first book was phenomenally successful, selling more than 14 million copies worldwide and creating a cult of hardcore fans who eagerly awaited each installment of the series that has been re-created over several mediums. A new BBC radio series will commence in May, featuring among others the voice of Christian Slater (producers had promised a "Hollywood heartthrob").

Seeing their favorite story on the big screen in a major Hollywood production is the coup de grâce for many "Hitchhiker's" fans, as plans for a film have been in the works practically since the day the book was first published. Douglas Adams was always interested in making a movie, and he wrote the original screenplay. But various obstacles got in the way over the years, a major one being the beloved author's death in 2001. The project was revived with new writers and directors -- in addition to a core group of people who had been working on the film from the beginning with Adams -- and it will debut Friday, starring Martin Freeman, Sam Rockwell, Mos Def and Zooey Deschanel.

Martin Freeman (known to many from his role as Tim from the original, British version of "The Office") plays Arthur Dent, a mild-mannered Brit who gets swept into a planetary adventure after an old friend, Ford Prefect (Mos Def), saves him when the Earth is demolished. To Arthur's surprise, Ford Prefect was an alien all along, a researcher working on the bestselling "Hitchhiker's Guide to the Galaxy." This is the instructional tome that advises its readers that a towel is the most useful thing in the universe.

Certainly "Hitchhiker's" isn't the only film that has inspired otherwise normal, well-adjusted adults to consider opening weekend as a sort of special Halloween -- who among us didn't see some poor soul wielding a light saber in line at Loews a few years ago? But the towel debate itself hits upon a definitive feature of "Hitchhiker's" and its fans. The very thing that attracted many to the book was its hilarity, but more than that, its subtlety. It's a sci-fi adventure; but, because of its smart, funny writing, it manages to stretch the genre. It's a sidesplitting tale, but in that dry, British way. For some fans, bringing a towel is an understated way of showing you belong to the club (it's a little less noticeable than a Storm Trooper mask, no?). But to others it's, well, nerdy.

Barrett Bowlin, 26, who is finishing up his master's degree at Kansas State University in Manhattan (that's Manhattan, Kan.), first picked up "Hitchhiker's" in high school and managed to turn his hobby into an academic pursuit while studying contemporary British literature. Concerned with Adams' exclusion from the canon, Bowlin has written papers advancing his cause, including one called "Panic Is Fun, Panic Is Vital: Locating Douglas Adams Within the Science Fiction Canon." He isn't one of those fans who hangs out on message boards or has a towel on hand; in fact, he's always admired how devotees can express their shared interest without blowing it out of proportion. "Hitchhiker's" references made by authors like Zadie Smith are subtle enough that the vibe is more, as Bowlin says, "'OK, I've read the same thing you have, and I get the joke,' instead of holding up your hand in a Vulcan sign and saying, 'Live long and prosper.'"

Far more exuberant is Rebecca Neipp, 27, a reporter in Ridgecrest, Calif. She and her husband have been reading the books aloud to each other in anticipation of the film, and they and 20 of their friends will descend on their local multiplex on opening weekend with towels. "People might think we're freaks, but nobody cares because that's how we pay homage to Adams," she said. She credits Adams with her love for words and writing, and with emphasizing that "you can be goofy and into technical things, oddball, left-field humor and be proud."

Some touched by Adams don't think "nerdy" is an inaccurate label for die-hard fans. "I don't know if it's a bad rap. It's probably fair," said James Norton, 29, the research director for "The Al Franken Show." He says "Hitchhiker's" is a book that shaped the way he looks at the world, and as a 14-year-old he had Adams sign a towel at a reading at a Madison, Wis., bookstore. As much as he admired the first book, he felt the subsequent installments "went downhill," and he isn't one to hang out in "Hitchhiker's" chat rooms, getting the latest news on the film.

Executive producer Robbie Stamp, a man intimately acquainted with Adams' work and its admirers, disagrees with Norton and his ilk, and relishes the diversity of "Hitchhiker's" devotees. "Yes, there are lots of technically minded people who love 'Hitchhiker's,'" said Stamp. "But I think it appeals to the intelligent and the curious, and that defies any particular categorization ... 'Hitchhiker's' fans are everywhere and they're all shapes and sizes."

Stamp, a longtime friend and business partner of Douglas Adams, said that filmmakers were very aware of the pressure of pleasing a sizable, long-standing and somewhat obsessive fan base. He gets regular e-mails from Adams junkies, and has used the Internet to keep fans updated on the progress of the movie. He's assured them that a lot of the material new to the movie was written by Adams, and he has worked hard to get details of the original story right. But he has not ceded control of the film to Adams' admirers. "You don't make internal decisions about what you're going to do with the movie based on that fan response. We've got a very brilliant, young, first-time director [Garth Jennings], and once we'd chosen him, the job really was to give him the space to deliver his vision. And I don't think that he's gone out there and looked at fan sites and thought, 'Oh, I'd better have this in the movie or I'd better not have this in the movie.'"

However, a young director is only one among the many concerns of longtime fans. Others include the appearance of a new character that wasn't in the books, and the casting of Americans in roles they've long considered British (a similar worry is that Mos Def shouldn't play a character many consider "white"). Hollywood's involvement in general troubles some. Wrote one Los Angeles fan, "My biggest reservation is that it has Disney's handprint on it and I am worried that they will strip it of its very British charm and replace it with shit they can package in Happy Meals and warm fuzzy plot schlock."

While it's unlikely that doubts will keep the die-hards away, there's a big gray area for some longtime admirers -- those who fall short of fanaticism. They've tired of waiting, and have turned downright apathetic about the film. Though they were touched by "Hitchhiker's" while young, a bit of the wonder rubs off with age. Indeed, 15 years after Adams signed a towel for James Norton, he will not be bringing it to the theater when he goes to see the movie -- if he makes it to the theater at all. "My hopes for the movie are parked in the middle somewhere. I'll probably see it before it gets to DVD."