Rapper-actor Mos Def, who stars in the new "Hitchhiker's Guide to the Galaxy," talks about pursuing two careers without being "Will Smith or Latifah or Sinatra -- or Sammy Davis Jr." 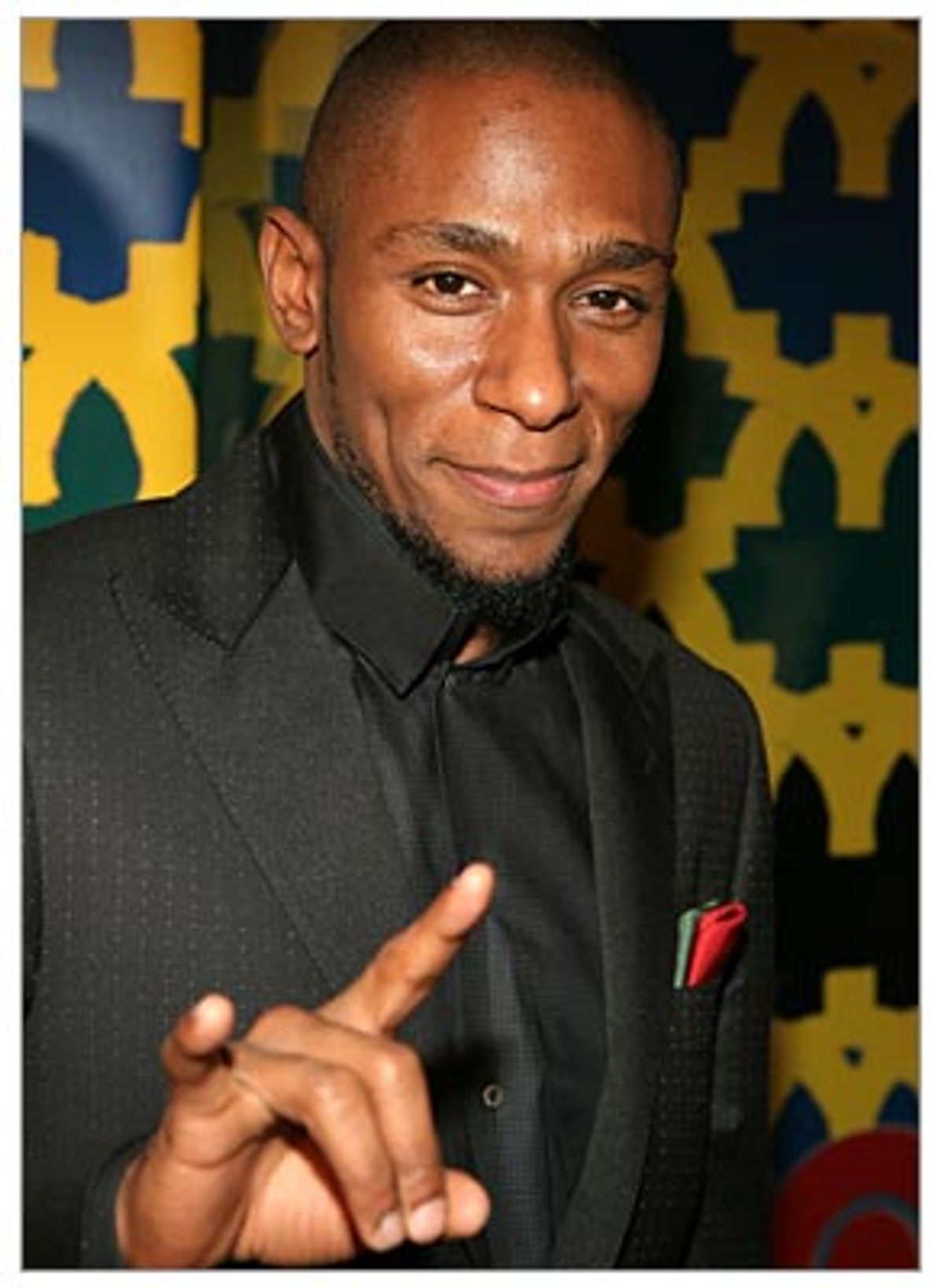 He first came to prominence as a rapper, releasing the legendary "Black Star" album with Talib Kweli in 1998 and his acclaimed solo debut, "Black on Both Sides," soon after. But Mos Def has been more visible recently as an actor, showing up in supporting roles in Hollywood fare such as "The Italian Job," "Monster's Ball," and "Brown Sugar," a highly praised, leading role on Broadway opposite Jeffrey Wright in Suzan-Lori Parks' Pulitzer-winning "Topdog/Underdog" (the New York Times' Ben Brantley raved, he "finds both the delightful innocence and the harrowing brutality in the role of a little brother who never grew up"), and even earning an Emmy nod for a starring role in HBO's "Something the Lord Made."

Def follows a number of high-profile rappers into acting -- Ice Cube, Vanilla Ice, LL Cool J, Tupac, ("rapper") Mark Wahlberg and plenty of others -- but his transition has been notably accomplished. His latest role is as Ford Prefect in the film adaptation of Douglas Adams' "The Hitchhiker's Guide to the Galaxy," which opens Friday. Salon recently interviewed Mos Def by phone.

Were you a fan of Douglas Adams before working on this film?

I wasn't aware of the book or of Douglas until I was approached to be part of it.

In your first roles as an actor you were credited by your given name, Dante Smith, but now you're going by Mos Def. Is that a matter of convenience, since you're so widely known by that name, or is it of symbolic importance to you?

Both, really. It's easier to have one professional name, but it is symbolic for me in that I didn't want to create this impression that as an actor I was trying to clean up or be more establishment or something. And I like that name, I like Mos Def, and I don't want to show any shame about my background.

The first time it came up was when I was doing "Topdog/Underdog," and they asked me what I wanted to be billed as and I chose Mos. And I think it's a good name.

You excel at both acting and music, so clearly you don't have to choose between them, but let's just say you did. Which would it be?

I don't have to choose, so I don't. It's like making a painter choose between using oil or using acrylic.

So you're just an artist working in different mediums?

Are there any successful models of musicians turned actors whose lead you feel that you're following?

No, actually. No, and I hope that's not disparaging to anyone who came before me.

I love David Bowie, for example, and I'd love to see him do more acting. But, you know, he's doing what he wants to do. I think what I'm doing is a little bit different from Will Smith or Latifah or Sinatra -- or Sammy Davis Jr.

Different in what way?

There was a five-year gap between your debut album and last year's "The New Danger." Do you have plans for another album?

Does it follow in the direction of the last one, away from hip-hop and toward and new kind of rap/rock fusion?

No, every album is different. But the same.

Can you describe what style the music will be in?

Not really, I'm not done yet.

Your much-publicized rock band, Black Jack Johnson, appeared on a few tracks on "The New Danger." Any plans to do a full album with the band?

Yes, there are plans for that.

Are there people who you feel are your peers musically? I think of Carl Hancock Rux and Chocolate Genius as two artists who are doing somewhat similar things to you.

Absolutely, and I'm a big fan of both of them. Also MF Doom, De la Soul, TV on the Radio, Bloc Party, Common, Talib Kweli, the Roots, Jay-Z. But everybody that I like is not like me. I love 50 Cent and I love the Game and I love Jadakiss. I'm a really big fan of Jadakiss. And Kanye [West]. I think Kanye is really quite special. Now he's showing an amazing visual skill; I'm a huge fan of his videos. Not just the ones he's done for himself, but the ones he's done for Common, for John Legend, I think it's really, really exciting.

"The New Danger" seemed to be an attempt to push out into other styles, using hip-hop as a base, maybe to push hip-hop into new terrain. Care to take a whack at the question of what's next for hip-hop?

Hip-hop is not that linear, you know? There's a lot of different directions happening at once, so I couldn't say. But I'm excited about people like MF Doom and Madlib and Jean Grae and everything that El-P is doing over there with Def Jux, and Mr. Lif and Murs.

And what's next for you?