"The Hitchhiker's Guide to the Galaxy" 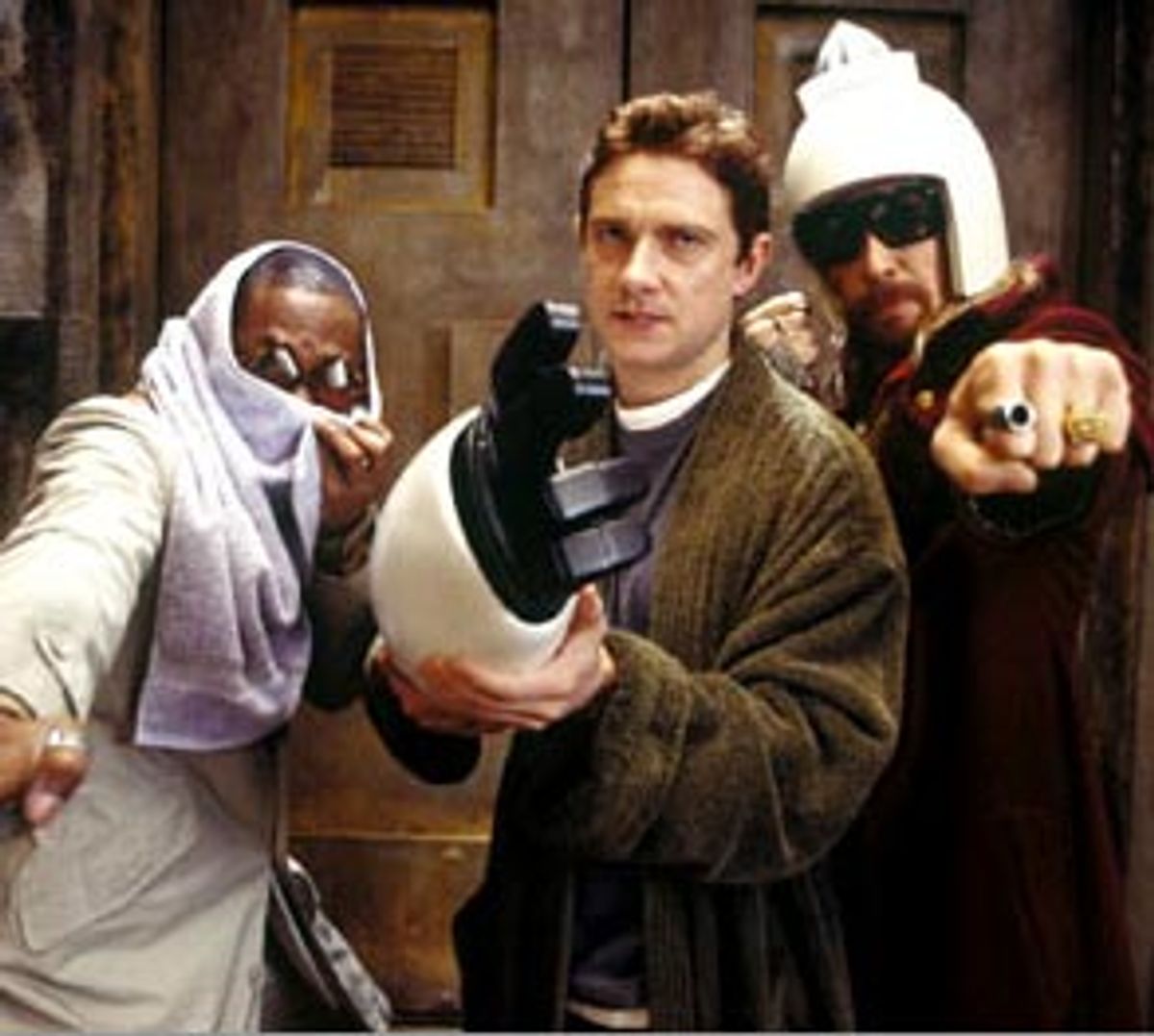 The late Douglas Adams' series of wry, sweet-spirited comic fantasy novels, beginning with the 1979 "The Hitchhiker's Guide to the Galaxy," are so cherished by readers in all corners of the universe that it seems almost suicidal to try to translate them to the big screen. Adams, who died in 2001, had always hoped his first book would be made into a movie. (Before his death, he'd completed a version of the script; the final screenplay is credited to him and to Karey Kirkpatrick.) It's a shame Adams didn't live to see this carefully cast and gently handled adaptation -- it captures the quizzical, quasi-spiritual nature of his book and manages to nail a surprising number of his dry little jokes, even some that you think could work only on the page.

The picture begins with a musical number in which choreographed dolphins leap and twist merrily in a Sea World-style setting. An invisible narrator (Stephen Fry) tells us authoritatively that these happy-looking dolphins, with their clacking tongues and flapping flippers, have long been trying to warn us that the world is about to end. Unable to get their message through to us dense humans (the third-smartest species on the planet; dolphins are the second, and you'll have to see the movie to find out what the first is), they've decided to vacate the Earth. Their parting shot -- also the title of one of Adams' later novels -- is the song we hear as they get ready to spin and twirl off the planet: "So Long, and Thanks for All the Fish."

It's a promising beginning, and a way of capturing Adams' gentle, jabbing humor without getting too precious about it. But much of the rest of "The Hitchhiker's guide to the Galaxy" doesn't live up to that opening. Directed by Garth Jennings, a veteran music-video and TV-commercial director, "Hitchhiker's Guide" does so many things right, and still doesn't quite hit the mark. The characters, so vivid in Adams' writing, seem washed-out and underdeveloped on-screen -- we never really get a chance to know them. And while the movie follows the wayward, episodic structure of Adams' book, it's poorly paced: Instead of moving along at a clip, it sags in the middle like a stretched-out hammock.

That's a shame, because it's clear that the filmmakers and actors worked hard to strike the right tone. Arthur Dent (Martin Freeman, of "The Office") is an exceedingly average fellow living in the English countryside; he's dismayed to wake up one morning and find his house is about to be demolished to make way for a bypass. He doesn't know it yet, but he has bigger problems: The world is about to end, and his friend Ford Prefect (Mos Def), an alien from another world (he chose his name after mistakenly thinking, upon his arrival on Earth, that cars were the dominant life form here), is about to whisk him away to safety. They hitch a ride on a Vogon spaceship -- more on Vogons later -- and set out for parts unknown, meeting up with the Rod Stewart-like president of the galaxy, Zaphod Beeblebrox (a gleaming Sam Rockwell), and his adorable, google-eyed astrophysicist girlfriend, Trillian (Zooey Deschanel). The guidebook that Ford and Arthur find indispensable in their travels, "The Hitchhiker's Guide to the Galaxy," is a capacious E-book offering invaluable tips for the intergalactic wanderer, such as where to find the best drink in existence (the Pan Galactic Gargle Blaster).

Ford, Arthur, Beeblebrox and Trillian set off on a quest to locate the greatest computer ever built, which will, Beeblebrox hopes, tell them the meaning of life. (The answer has already been calculated -- it's 42 -- but since nobody ever really understood what the question was in the first place, all seekers of such universal wisdom have found themselves back at square one.)

You'll know right away if this kind of loopy humor is for you. "Hitchhiker's Guide" does scan like one long in-joke, one you may feel on the outside of if you haven't read (or didn't care for) the book it's based on. The picture has a relaxed but enthusiastic "Let's put on a show" aesthetic: Its special effects are intentionally low-tech and yet surprisingly effective. They're designed to foster nostalgia for the "Star Wars" era, in which floating planets and gleaming spacecraft, rubbery creatures and soulful robots, still meant something, or at least were still capable of giving us visual pleasure without clonking us on the head. The movie's creature design is wonderful: The Vogons, hunchbacked, miserable-looking louts with scraggly strands of hair and saggy, liver-spotted skin, are particularly delightful, in a horrifying way. (Unimaginative civil-servant types who are exceedingly fond of bureaucracy and red tape, the Vogons are the baddies responsible for the destruction of Earth. They also write very, very bad poetry.)

The human characters aren't nearly as effective, although that isn't the actors' fault: They just get lost in the constant churning of the story. Mos Def gives the alien Ford a lanky, twitchy charm, but we just don't get enough of him -- he seems swallowed up in the ensemble. The always-marvelous Bill Nighy shows up as planetary construction engineer Slartibartfast, and he slithers through his few small scenes with that trademark Nighy offhanded elegance.

But the most likable and well-defined character in the picture is Marvin, a chronically depressed robot (he gets his voice from Alan Rickman). Marvin, with his round metal Charlie Brown-style head and Eeyore point of view, is more human than most humans. His eyes, two sleepy-looking triangles, reflect the chaos around him with exaggerated helplessness. Just watching him toddle around, dejectedly, is mopey bliss. More than any other character, he gives this enjoyable but not-quite-there picture a human face.