Washington is a rare outpost of optimism in gay America, and that may be because the state is moving slowly on same-sex marriage. 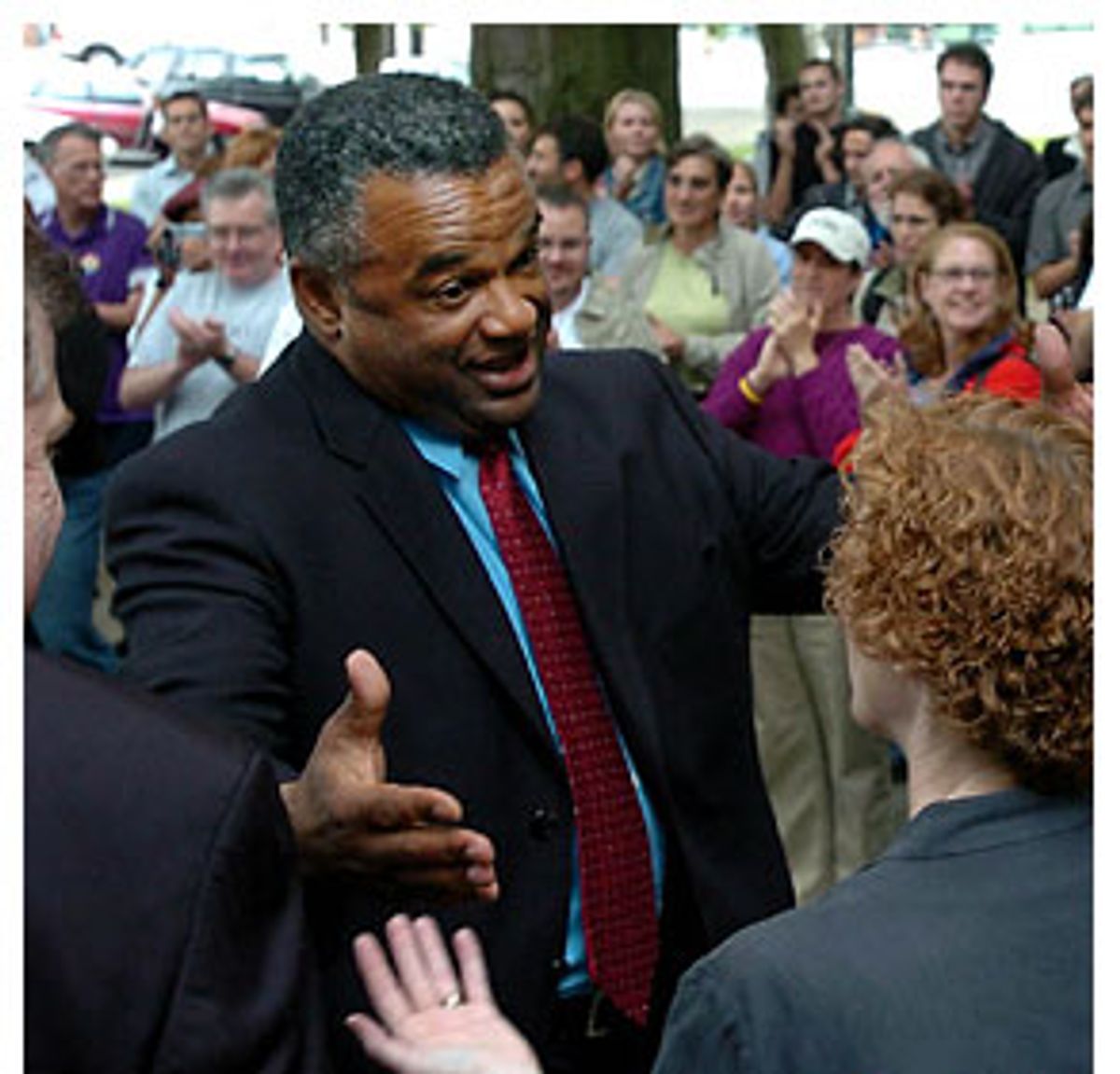 It's hard to remember, now that the mood of the country feels so different, but last spring was an incredibly optimistic moment for gay rights supporters. In the days leading up to the first legal same-sex marriages in Massachusetts, something unheard of was happening in America: Straight politicians around the country, beginning with Mayor Gavin Newsom in San Francisco, were deciding that full civil equality for gay and lesbian citizens was now so urgent and important that it was worth breaking state law to accomplish.

It was a thrilling time to be a gay American. And honestly, for me, it was also a bit of an embarrassing time. The lawbreaking by officials on behalf of gay rights was migrating quickly, from San Francisco to New Paltz, N.Y.; to Sandoval County, N.M.; to Asbury Park, N.J.; to Portland, Ore. It felt as if a Berlin Wall of legal discrimination against gay people was being torn down, and here I was in Seattle, gay, in favor of same-sex-marriage rights, and doing -- well, not doing anything nearly as gutsy as Mayor Newsom. I felt ashamed. When he proudly explained his actions to reporters by saying things like, "There are certain principles in life that transcend patience," I remember thinking: What am I waiting for?

Last month, when the Oregon Supreme Court nullified some 3,000 Newsom-inspired marriages performed for same-sex couples in Oregon in March 2004, I recalled those feelings from last spring, but without the sense of optimism. A year ago, more than 7,000 of these marriages were conducted in five states across the country. But with the Oregon Supreme Court's decision, and earlier similar decisions in New York and California, all of these "outlaw" marriages have now been either nullified or invalidated.

Whatever future generations end up calling last spring's spree of outlaw unions (is the "Gay Spring of Love" too corny for the history books?), the phenomenon is now officially dead. But perhaps we can learn something from its demise.

Here's what I did last spring after Newsom shamed me into action. In Seattle, where I work as a freelance writer, I began writing articles in a local alternative newsweekly encouraging politicians here to follow Newsom's lead. I wanted them to issue marriage licenses to gay couples in defiance of the state law banning same-sex unions, just as Newsom had done in California.

It turned out that Ron Sims, county executive for King County, which contains Seattle, was the man who controlled the local levers of marriage license power. That seemed promising. Sims appeared to be someone who could easily be persuaded to follow Newsom's example. A black politician who promoted himself as someone who always chose the right thing over the politically expedient thing, Sims had been active in black civil rights issues during his youth and now publicly favored same-sex marriage out of the same impulse toward social justice.

As I pressured Sims to break the law, I found that I had landed squarely on one side of a deep divide cleaving the gay rights movement. In one camp were activists, most of them in the higher echelons of the movement, who had been working steadily for years on changing this country, law by law, into a more friendly environment for homosexuals. They saw lawbreaking as risky, and even anathema, to gay interests, since respect for the law is often all that protects minorities. One of them, a prominent Seattle lawyer who is a leader of the national gay rights group Lambda Legal, told me last year that while he was drawn to the idea of breaking unjust laws that discriminate against gays, he worried about the precedent it would set. He wondered, What would stop people who oppose gay rights from demanding that laws protecting gays be broken by their politicians, based on a similar logic of righteous urgency?

In the other camp were gay activists who felt the same impatience as Newsom, or had been newly infected by it. These were the types of people who last spring had taken to quoting Martin Luther King Jr.'s "Letter From Birmingham Jail" ("Wait has almost always meant never") and wanted full equality for gays and lesbians, immediately and everywhere. Never mind that it took four years of plodding legal work for same-sex unions to become a possibility in Massachusetts -- the fact that one state had legalized gay marriage was a powerful antidote to the idea that it could never happen in America. And now that it had somewhere, the injustice of having to wait for the politicians in other states to come around was unbearable. This was the side I aligned myself with last spring, the side that was marching to the King County Administration Building and barraging Sims with e-mails telling him to act now or be considered a moral coward.

A year later, it seems I owe Sims an apology. The brief spree of "outlaw" marriages has not created more opportunities for same-sex unions. Instead, it has helped fuel a backlash against gay rights across the country. Constitutional bans against same-sex marriage now exist in 17 states, including, not coincidentally, Oregon. They will take years, if not a decade or more, to reverse. And now 18 other states are considering constitutional bans. Even the election of George W. Bush in 2004 may have been, to a degree that has been much debated since, a reaction to the television images of gays getting married in San Francisco and elsewhere.

I now have to admit that the other side of the divide in the gay rights movement, the go-slow side, was correct. And so, it turns out, was Sims. He refused to break the law, despite pressure from me and many other impatient gay residents to do so, a stance that seemed to genuinely pain him.

Sims didn't just sit on his hands, however, and contemplate his respect for the law; he decided to work as an activist within the legal system. He told gay rights supporters that he remembered images from his youth of Gov. George Wallace standing in the doorway of an Alabama school to block integration, and said he didn't want to be remembered as the man who stood in the doorway to block gay rights. On March 8 of last year, he invited six gay couples selected by a local gay rights group to come to the county's marriage office, at which point he denied them licenses and then promptly invited them to sue King County. The case, Anderson vs. Sims, is now before the Washington Supreme Court.

Sims was preparing to run for governor at the time (if he'd been successful he would have become the state's first black governor), and he knew his move would anger conservative Washingtonians outside of liberal King County. He addressed these voters with a simple quote from King: "The time is always right to do what's right." A few months later, Sims lost in the Democratic primary to state attorney general Christine Gregoire, whose public position had been that Washington was not ready for same-sex marriage. She went on to win the election.

In the end, Sims is perhaps a minor figure in the national battle over gay rights. But his insistence on working within the law created an important study in opposites between Washington and Oregon, one to which gay Americans should pay attention.

Last spring, gay residents of Oregon enjoyed the euphoric feeling of participating in or witnessing officially sanctioned same-sex marriages. But it was a fleeting moment. Now the state has no legal same-sex marriages and a newly approved constitutional ban expressly prohibiting them. Washington, in contrast, is in the midst of a carefully orchestrated legal process, started by Sims, that could very well result in the state's becoming the next Massachusetts. The deliberate slowness with which justice moves has been frustrating for some gay rights supporters in Washington, but the pace of the process has allowed them to get organized in a way they haven't been in years, as exemplified by their rapid and loud response to Microsoft's recent decision not to support an anti-discrimination bill in the state Legislature this session.

It has also given activists time to try to win over conservative residents of rural areas in advance of a Supreme Court decision that, if it follows the growing body of national case law supporting same-sex unions, will be quite upsetting to them. A backlash is still sure to emerge in Washington if same-sex marriage is legalized, but because of the time the legal process has allowed for dialogue between gay rights supporters and opponents, it will probably be less severe than in Oregon and other states.

All of which puts me in a rather humbled position. A year after Sims chose to work within the law rather than break it, life in Washington suddenly seems more full of possibility for gays and lesbians than it does to the south of us, in Oregon. My state has emerged as one of the rare outposts of optimism in gay America, and for that I have to thank, in large part, the fact that Ron Sims didn't listen to me.