"Freakonomics" author Steven Levitt makes explosive claims -- most notoriously, that an increased abortion rate led to a drop in crime -- but refuses to say what we should do about them. 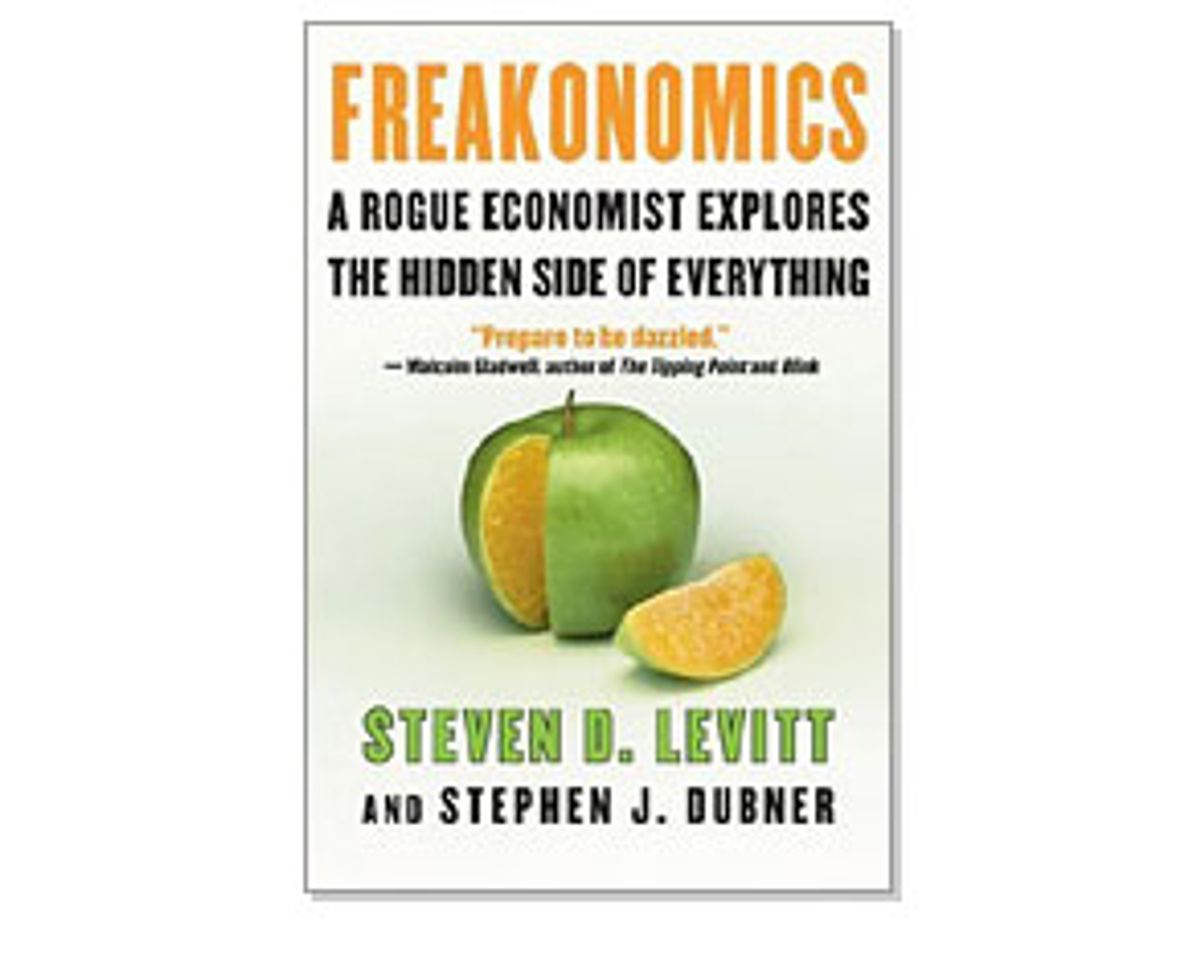 Steven Levitt, the bright young economist whose unconventional insights into crack gangs, parenting strategies and black baby names are chronicled in "Freakonomics," is most famous for a fascinating and troubling argument about the impact of legalized abortion.

Levitt first broached his theory in 1999, but it is the clear centerpiece of "Freakonomics," so a review of the key points is in order. According to Levitt's parsing of the data, the drop in crime rates that occurred nationally in the 1990s was in large part due to the rise in abortions that followed Roe vs. Wade. "Decades of studies have shown," write Levitt and his co-author, Stephen Dubner, "that a child born into an adverse family environment is far more likely than other children to become a criminal."

Q.E.D.: After Roe vs. Wade, millions of children who would otherwise have faced "adverse" environments were never born. A generation later, "just as these unborn children would have entered their criminal primes, the rate of crime began to plummet."

Neither the left nor the right wanted to hear this explanation. The left is perturbed by the suggestion that low-income, uneducated and predominantly minority women are destined to perpetuate a criminal underclass. The right abhors any implication that abortions could have a positive effect on society. Together, they assailed Levitt's arguments.

A legion of critics have disputed Levitt's data, but whether he's right or not is not in the purview of this review to answer. The topic is worth a book -- or a library of books -- all by itself, and it calls out for rigorous reporting. But that's not what "Freakonomics" does. The book is a showcase for Levitt's intriguing explorations into a number of disparate topics, not an in-depth defense of his theories. There's plenty of fun to be had: Who doesn't want an inner look at the typically capitalistic structure of a crack gang? Who on this earth won't be endlessly fascinated by the rise and fall of baby names over the ages? But this slender (barely more than 200 pages of actual text) and easy read doesn't exactly settle anything, once and for all. As the authors themselves are wont to point out, "Just because two things are correlated does not prove that one causes the other."

But let's say, for the sake of argument, that Levitt's analysis is correct. Isn't the obvious next question, What then are we supposed to do about it? A link between abortion and crime? Could one get any more politically charged or socially relevant? I really want to know, now that I'm armed with this data, what society can do to further reduce crime. If unwanted children are likely to break the law, shouldn't the government be pouring money into family planning services, or setting up support structures so that kids born into families that don't want them get a leg up in life?

Such questions are not addressed in "Freakonomics" -- the policy implications of what the data tells Levitt do not appear to have been a priority for the authors. Maybe that would have bogged the book down, or strayed too far into politically treacherous waters. In any case, the authors do some nimble handstands to avoid coming to any conclusions at all. At both the beginning and the end, Levitt and Dubner trumpet the book's lack of a "unifying theme" and stress that their main hope is that readers, after finishing "Freakonomics," will be less accepting of "conventional wisdom" and more amenable to "thinking sensibly about how people behave in the real world." "Freakonomics" wanders from case study to case study, explicitly making as few connections between one insight and another as possible, and explicitly eschewing any whiff of morality. Morality, we are told, only "represents an ideal world." Economics, on the other hand, "represents the actual world."

This is unsatisfying to the point of willful irresponsibility. Levitt's bio says he recently received the John Bates Clark Medal, "awarded every two years to the best American economist under forty." His peers think him brilliant, his career track has been extraordinary: By age 36 he was already a full professor at the University of Chicago and an editor of the Journal of Political Economy. Although it is unclear from "Freakonomics" exactly what he is brilliant at, he does seem to have a remarkable sense for how to find unexpected correlations in masses of data.

(To some readers, however, some of his insights might seem, uh, conventional. I did not find it surprising that women lie about their weight on dating sites, or that some teachers in the Chicago public school system cheated to ensure that their students scored higher on standardized tests. The fact that foot soldiers in a crack gang do not make the big bucks was also unenlightening, as was the observation that real estate agents are often more likely to look out for themselves than their clients.)

Brilliance doesn't require a sense of direction. Unfettered curiosity is a great thing, and it's easy to be envious of Levitt, who appears to have the freedom to look into whatever he wants, as long as there are reams of data to munch on. But when choosing the kinds of topics that Levitt seems drawn to, which more often than not involve matters of race and class, avoiding the implications of what the research purports to show could be construed as overly timid. Or a cop-out.

The closest thing there is to an underlying point of view is the statement that "incentives are the cornerstone of modern life." Levitt's skill is in figuring out what the incentives are that drive a given behavior pattern. But you could argue that the real test of brilliance isn't just to identify such incentives, but to figure out how to structure new incentives that achieve a desired result. Turning conventional wisdom on its head isn't enough. Or, at least, it shouldn't be.

But the scariest part of "Freakonomics" is its assertion that parents can't really do much to affect how their kids turn out. Never mind all that reading your kids to bed every night, or obsessively applying every possible lesson in every possible parenting book. The correlations that exist between parents and the success of their offspring have little connection with what parents do. It's all about who they are. Test scores are affected by whether parents have lots of books, not by whether they read them to their children.

"By the time most people pick up a parenting book, it is far too late," write Levitt and Dubner. "If you are smart, hardworking, well educated, well paid, and married to someone equally fortunate, then your children are more likely to succeed." And the converse is equally true. If you are dumb and poor, your kids are screwed.

Somehow this is both unconventional and conventional at the same time. It's hardly a breakthrough to observe that those who have already climbed the ranks of social success are more likely to pass on such attributes to their offspring. But to suggest that just being who you are is enough is a tremendous godsend to parents worried about letting their kids watch the Cartoon Network for too many hours a day. Doesn't matter! You're smart -- they'll be smart!

In a backhanded way, however, the chapter on parenting fits in with some of the earlier observations in "Freakonomics." There's a clear link between the abortion-cures-crime and the parenting-why-bother arguments. Low-income, uneducated mothers who prevent unwanted kids from being born are doing those kids a favor, since, given their own socioeconomic status, the children are most likely going nowhere anyway.

Freaky indeed, and not in a good way. There's an unsettling sense of doom in the data as deduced by Levitt. Free will doesn't appear to be an option -- we'll do what the incentives encourage us to do, and there's no suggestion as to how to set things up differently.

I think I'll read my kids to bed anyway, for the hell of it.