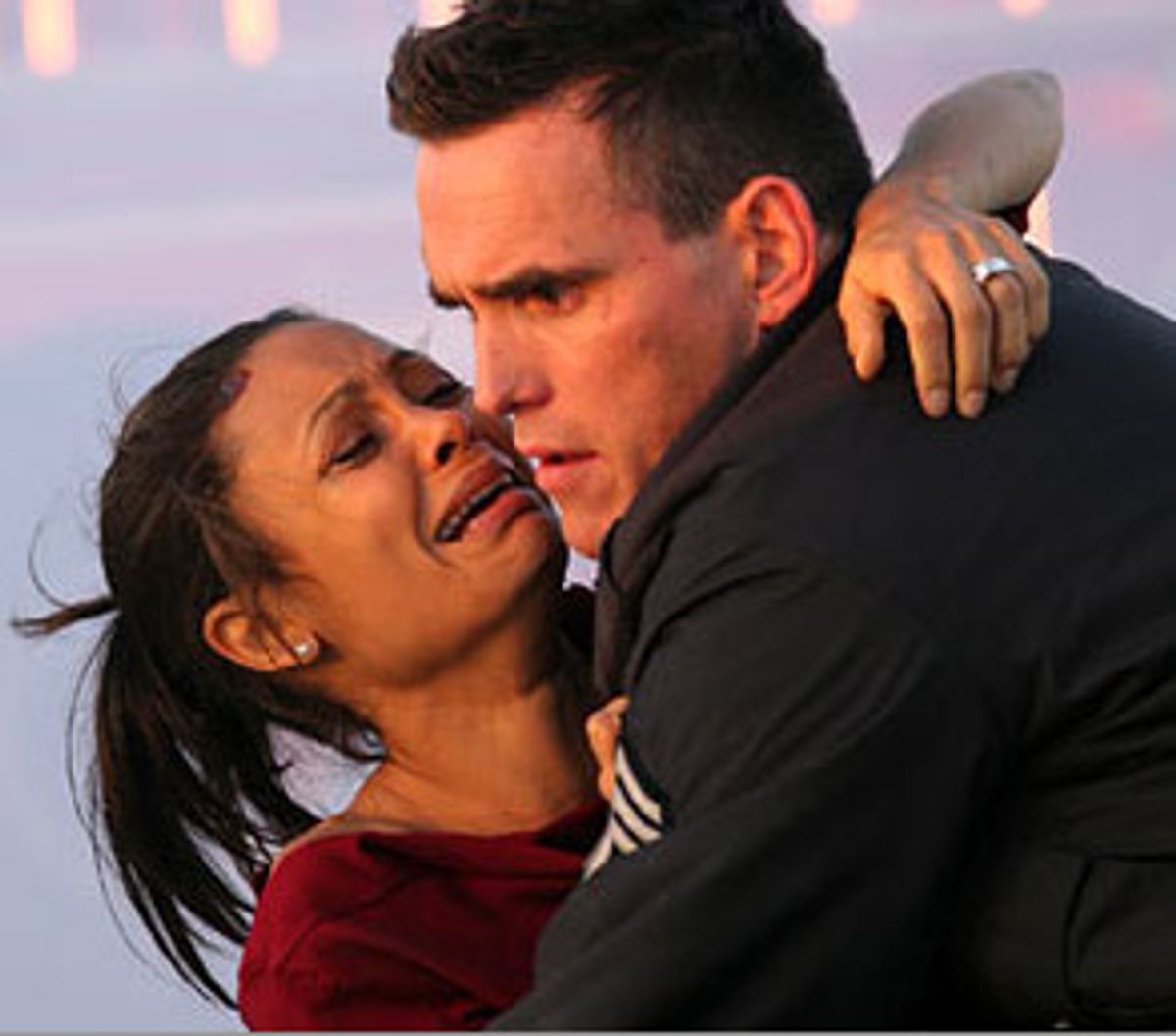 In Paul Haggis' "Crash," a dozen or so characters of several races, from Hispanic to white to black to Asian, find their lives surprisingly interconnected during a 36-hour period in Los Angeles. Matt Dillon is a cop who doesn't like black people and goes out of his way to humiliate them; Sandra Bullock is the spoiled wife of an opportunistic D.A. (Brendan Fraser) whose nerves are set on edge when she and her husband are the victims of a carjacking at the hands of two African-American youths (played by Chris "Ludacris" Bridges and Larenz Tate); Michael Peña is a locksmith who has worked hard to move with his wife and his little girl from a bad neighborhood to a safe one.

As the lives of these people (and several others) criss-cross and intersect, their hidden prejudices are exposed and their outright, on-the-surface ones are emphasized. They make their feelings known with the kind of authoritative speechifying that exists only in the movies. And so "Crash" raises the question: If racism is so pervasive in our society, why do we need such an elaborately contrived plot to drive home the message? In other words: How many racists does it take to screw in the point?

"Crash," directed by the screenwriter of "Million Dollar Baby" (he also cowrote the script, with Bobby Moresco) is the sort of movie that springs from good liberal impulses, and a few of the scenarios it sets up -- as when Dillon decides to pull over and harass an affluent black couple, Terrence Howard and Thandie Newton, for no reason other than that they're DWB -- are at least potentially intriguing. For the first few scenes, at least, you wonder where Haggis might be going with all this. But it doesn't take long to catch on: This is a puzzle movie with a message, a jury-rigged novelty designed to keep us wondering how it's all going to turn out even as we're chewing on Haggis' central thesis, which is, essentially, "Racism is bad for children and other living things."

What's more, these interlocking stories don't move along as swiftly or as urgently as they should, and much of the dialogue thumps along on square wheels. (At one point, Peña's young daughter, still remembering all too vividly the stray bullet that came through her bedroom window in the family's old neighborhood, asks plaintively, "How far can bullets go?") And the picture has that mildly grainy look and those drony soundtrack effects (the cinematography is by J. Michael Muro, the music by Mark Isham) that are commonly used to denote serious, no-frills filmmaking.

All that said, it's easy to see why so many actors were eager to appear in the movie. Despite the fact that the bulk of Hollywood movies are formulaic products designed to make big bucks worldwide, and are, if anything, timidly apolitical, Hollywood -- meaning the community of actors, writers, directors and producers who work at least some of the time in mainstream films -- is still refreshingly liberal. A movie like "Crash" lets actors wear their feelings on their sleeves, and despite the movie's overall awkwardness, some of them pull it off gracefully: Don Cheadle plays an African-American detective who has built a good life for himself but who hasn't done all he could have to help his younger brother -- his performance is supple and understated, as Cheadle's performances almost always are. And Peña, as the Hispanic locksmith who, despite his good manners and obvious dedication to hard work, is still viewed suspiciously because of his tattoos and streetwise demeanor, carries the most difficult scene in the movie: He soothes his little girl's fears by telling her how a fairy appeared to him when he was 5 years old and bestowed upon him an invisible cloak of invincibility, which he is now passing on to her. Peña delivers his lines with tough-guy assertiveness, but they're also infused with tenderness. It's a lovely, and surprising, scene.

But for the most part, "Crash" works so hard at moral instructiveness that it's tedious to watch. That's a shame, because there still ought to be a place for the old-fashioned social-problem picture. I'm thinking of movies like "Bad Day at Black Rock," "Twelve Angry Men," "Norma Rae," or, to name two more recent examples, "Erin Brockovich" and "The Insider" -- movies that stem from liberal outrage and the need to speak out against racial or societal injustice. (A superb example from last year, though it's not an American movie, is Terry George's "Hotel Rwanda.") But "Crash" doesn't have the resonance of those movies, or even just the kind of storytelling that makes them so righteously entertaining. When Sandra Bullock hugs her Hispanic maid and says, "You're the best friend I've got," we, like her, may be overcome with warm fuzzies. But we haven't really been made to think, or even to feel. "Crash" only confirms what we already know about racism: It's inside every one of us. That should be a starting point, not a startling revelation.