With the insurgency boiling over and sectarian strife spreading, ethnic divisions threaten to derail the new Iraqi government. 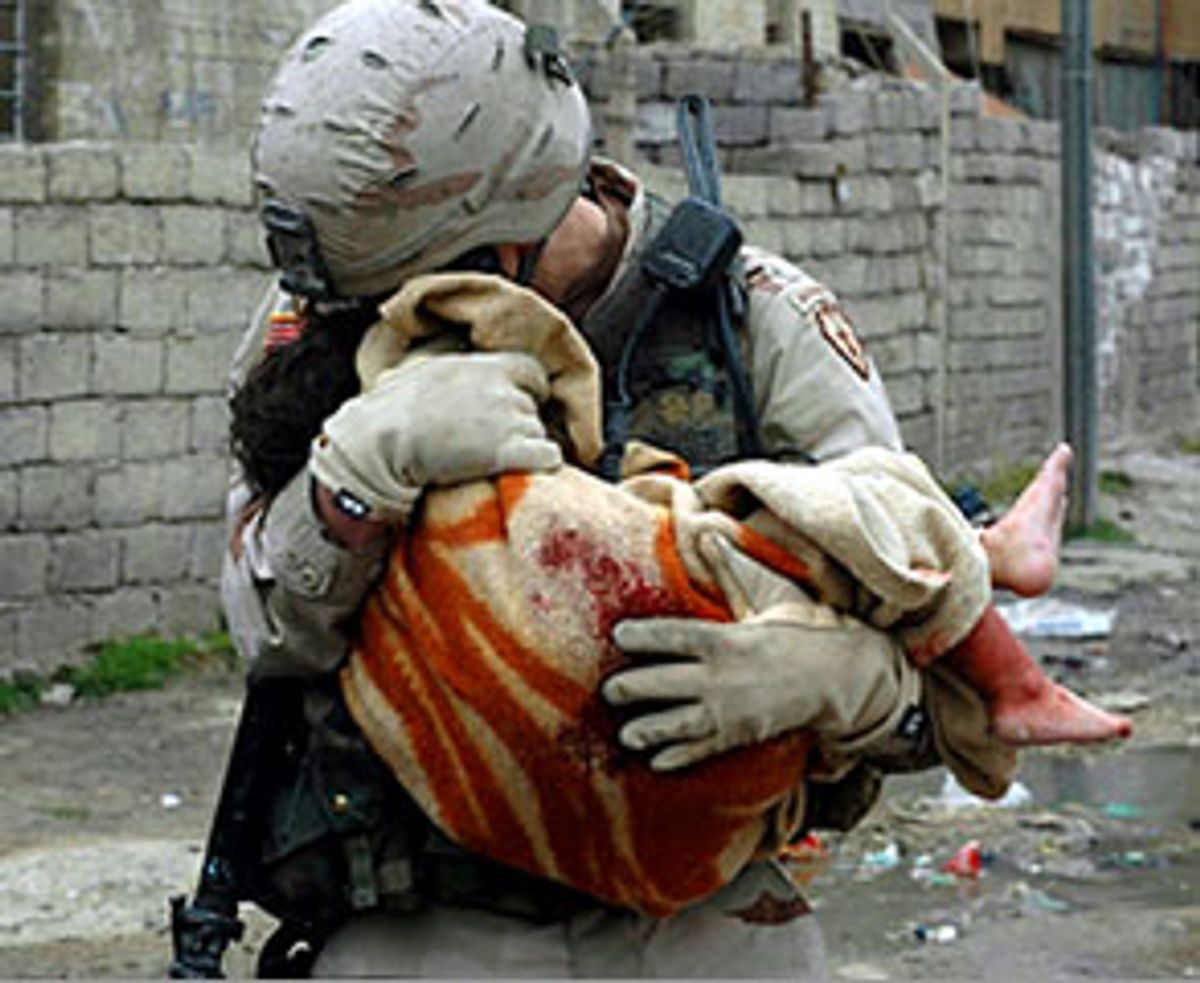 Iraq's elected Parliament finally swore in a new Cabinet on Tuesday -- yet another milestone that the Bush administration hoped would represent a decisive turning point in its campaign to remake Iraq. But like the toppling of Saddam's statue, the dictator's capture, the formation of an interim government, the siege of Fallujah, the national elections, and the formation of a new government, this latest development offered little reason for hope that the bloody insurrection would subside.

Years ago, George Bush the elder explained why he did not push on to Baghdad at the end of the first Gulf War: He feared the breakup of the Iraqi state. The most dangerous fissure was and is between Iraq's majority group, the Shiites, and the formerly ascendant Sunnis. Those divisions have now exploded into a horrific guerrilla war in which disaffected Sunnis increasingly target Shiites and Kurds. In the week after the Cabinet was presented to Parliament, Sunni Arab guerrillas went on a bombing spree that left some 200 dead and hundreds more wounded. The Bush administration had hoped that the new, elected government would attract the loyalty of alienated Iraqis, and that as a result the guerrilla war would wind down. Instead, Sunnis are furious that their representation on the Cabinet is still unclear and that their suggestions for Cabinet members have been rejected by Prime Minister Ibrahim Jaafari.

The massive suicide bombing that killed 60 and wounded 150 at a police recruitment station in Irbil Wednesday morning was only one of a string of deadly assaults signaling the resolve of the Sunni Arab guerrillas to keep fighting. While some of the attacks were carried out by fundamentalist holy warriors ("jihadis"), the bulk are probably the work of Baath military men. A Col. Zajay, a Shiite police official in south Baghdad, told the London Times last week, "We have lots of information that the Baathists are regrouping ... They think they can take power again."

President Bush, as usual, tried to put the best possible light on the situation, saying in his April 28 news conference that he believes "we're making really good progress in Iraq" and praising the new government for exemplifying "unity in diversity." Many Iraqis, shell-shocked by the bloody attacks and the unraveling of the Iraqi social fabric, begged to differ. In addition to the massive bombing campaign that greeted the formation of the new government, sectarian strife continued in the mixed Sunni-Shiite areas south of Baghdad. In another alarming development, major rioting broke out Tuesday and Wednesday at Baghdad University between Shiite and Sunni students and professors.

When the Cabinet was presented to Parliament on April 28, only 185 members (out of 274) showed up to vote it into office, and Sunni Arab officials were clearly frustrated and disappointed that so many key posts reserved for Sunnis had not yet been filled. Eleven small Sunni parties had formed a National Dialogue Council to negotiate with Jaafari and to put forward candidates for positions. The Sunnis had demanded seven ministries, including the powerful post of minister of defense. But only a few of the ministries allotted to the Sunni Arabs were filled by Prime Minister Jaafari before he took the Cabinet to Parliament. Sunni Arabs expected to get defense, human rights, and industry and minerals, but those posts were filled by acting ministers.

Among the major Sunni Arab players, the rotund Vice President Ghazi al-Yawer called the new Cabinet, with its holes where Sunnis should be, "disappointing" and "sectarian." An official of the Iraqi Islamic Party said that the Cabinet did not represent Iraq and therefore could not usher in national reconciliation. He complained of its "racist" character. He said that all of the candidates suggested by his party for Cabinet posts had been rejected.

The Association of Muslim Scholars, a hard-line Sunni group with extensive ties to the guerrillas, responded to the Cabinet by saying that there is no hope of peace in Iraq until the United States withdraws its forces. In his Friday prayers sermon at the Umm al-Qura mosque in west Baghdad, Shaikh Hareth al-Ubaidi criticized the new government of Ibrahim Jaafari as having "marginalized the Sunnis." He also ridiculed the talk that a Sunni Arab would be appointed "minister of tourism."

Sunni Arabs constitute about 4 million of Iraq's population of 25 million and predominate in Baghdad and its western and northern hinterlands. They had been the elite of the country in the 20th century, and they dominated the upper reaches of the civilian bureaucracy and the officer corps, as well as being large landlords and entrepreneurs. Under Saddam Hussein, the Baath Party became an important source of wealth and patronage for Sunni Arabs, the top leadership of which kept Kurds and the majority Shiites politically marginalized.

The new government was seen as a threat by the guerrilla movement, which indulged in an orgy of bloodletting. On Friday, as April ended, guerrillas detonated four bombs in the relatively well-off and famously pious Sunni quarter of Azamiyah in the capital, killing 20. They also struck in Madaen, where they used the technique of setting an explosion to attract police and Iraqi army troops, and then detonating more bombs when the police and military arrived, killing 13. Altogether, guerrillas killed 50 and wounded 114. They struck again on Saturday, setting off five bombs in Baghdad that killed 11 and wounded 40. They also targeted a building belonging to the National Dialogue Council in a bid to make it stop negotiating with others.

On Sunday, the guerrillas set off five bombs in Baghdad, killing six and wounding 40. But they also attempted to demonstrate their range, striking at a funeral for a slain Kurdish official in the northern city of Telafar. They killed 30 and wounded 50, mainly northern Kurds. On Monday they were at it again, killing 29. Then after a lighter day on Tuesday, they hit Irbil. The constant violence, much of it targeting Shiites or Kurds, refuses to subside.

Frantic negotiations between Jaafari and the Sunni Arabs attempting to make a deal led to an expectation that when the smoke cleared on Tuesday, Jaafari would have a complete Cabinet and would have the Sunni Arabs aboard. Negotiations appear to have broken down, however, because the Sunnis presented as candidates persons who were too close to the Baath Party. Vice President al-Yawer sullenly boycotted the festivities, as did most other Sunni Arab movers and shakers. The Associated Press quoted Mishaan Juburi, a Sunni parliamentarian that many Shiites see as having been too close to Saddam in the old days. He said, "If al-Yawer [had] attended the ceremony, it would have been the end of him politically."

Iraq thus enters the new world of elected government with a great deal of suspicion being expressed about ethnicity. The new Shiite leadership was threatening to purge ex-Baathists from the military and intelligence fields. Sunni Arab leaders complained that the Shiites had not kept their promise to give the Sunni Arabs a position in the new government that was appropriate to them. Political scientist Nabil Muhammad Salim of Baghdad University told the Arabic press, "Jaafari demonstrated great flexibility in the negotiations, but his colleagues put enormous pressure on him." Likewise, he said, the Sunnis insisted on some names at a time when they should have shown more flexibility. (The Sunni Arabs are said to have put forward ex-Baath officers for several posts whom the Shiites found completely unacceptable.) The Arabic press reported that Jaafari called on those ex-Baathists whose hands were not stained with blood to express their contrition (for having been Baathists) and to begin a dialogue with the new government.

The most dramatic instance of Sunni-Shiite conflict this past week concerns the death of Baghdad University student Masar Sarhan. He joyously threw a party when Ibrahim Jaafari was sworn in as prime minister. A member of the Shiite Dawa Party, Sarhan was expressing his solidarity with his party, which had won the office of prime minister for the first time ever. He was gunned down by three assassins. In reaction, Shiite students rioted on Tuesday, attacking Sunni Arab students and professors, whom they blamed for Sarhan's death.

In the meantime, Sunni-Shiite violence continued in a number of hot spots. In the mixed neighborhood of Doura in southern Baghdad, guerrillas constantly target Shiites for killings. They especially go after Sayyids, or those who claim descent from the Prophet Muhammad. In Suwaira near Madaen, police pulled 40 bodies out of a river, most of them Shiite. Mourning family members blamed Sunni guerrillas for the deaths. Rumors had earlier circulated that Shiite hostages would be killed in Madaen, and many Iraqis were convinced that the bodies recovered were those of Shiite victims of Sunni barbarity. The new, Shiite governor of Najaf, challenged Sunni clerics to rein in their adherents and warned that if the provocations continued, Shiites would take the law into their own hands.

The entire Bush administration-driven political process since last November has worked at odds with its own goals. The U.S. military attack on Fallujah enraged most Sunni Arabs and spread the guerrilla war to previously quiet cities such as Mosul. As a result most Sunni Arabs were not able to vote or were too angry to do so. Sunnis ended up with only 17 seats in the 275-member Parliament. Attempts to put them in the new Cabinet have produced new wrangling and delays and bitterness. The Sunni question in Iraq is now on the front burner. Given all the explosives still missing in Iraq, that is a dangerous place for it to be.