A character boasts: "I once fought two days with an arrow through my testicle." After sitting through this would-be epic on the Crusades, I know just how he felt. 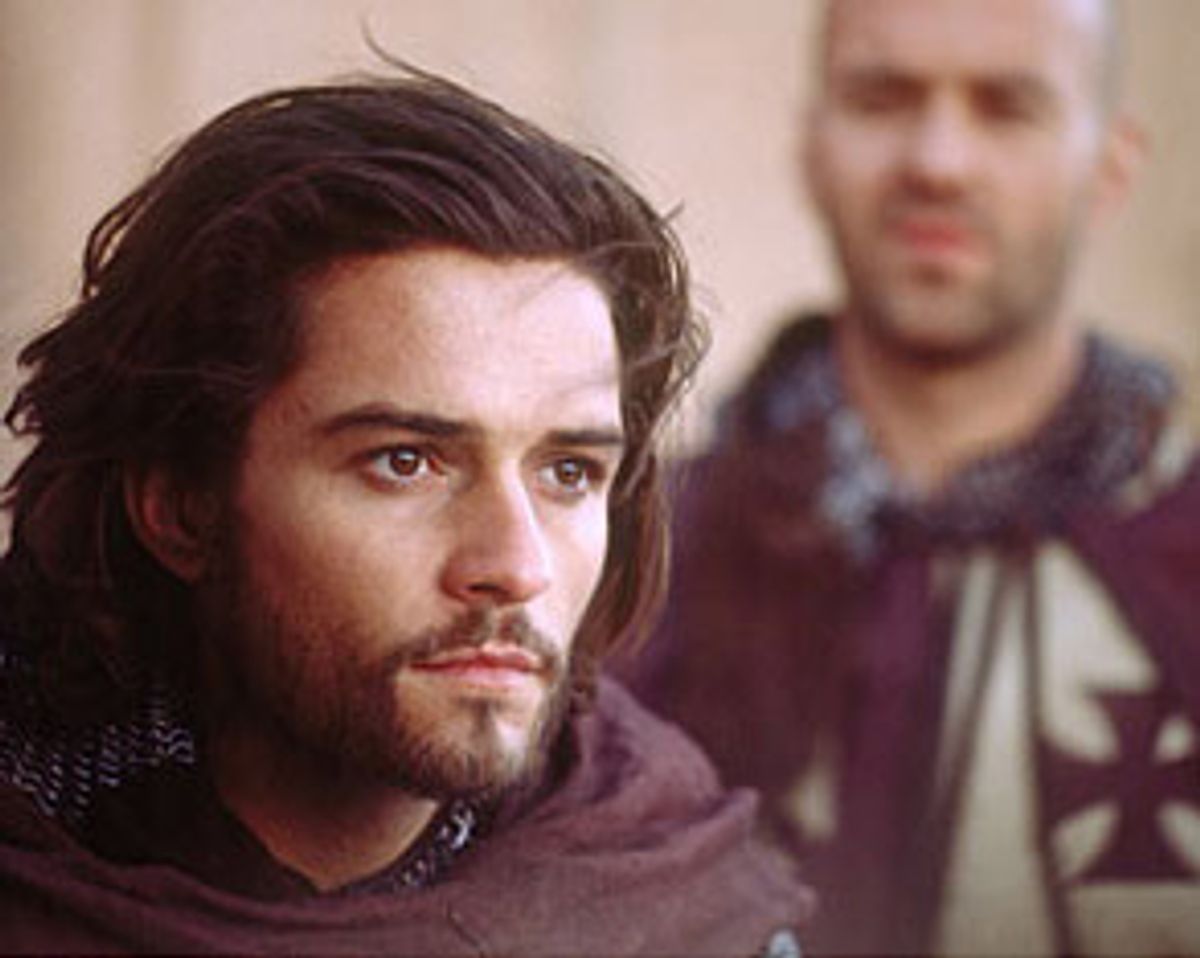 Like "Troy," "Alexander" and "The Last Samurai," Ridley Scott's "Kingdom of Heaven" is another boy's-book adventure movie dressed up as a grown man's epic -- it's far too little for its britches. Orlando Bloom plays 12th century crusader Balian of Ibelin. (When wise elder warrior Godfrey of Ibelin, played by Liam Neeson, knighted him with a slap on the face, I wanted to cry out, "Arise, Sir Loin of Beef!") In the beginning, Balian is just a humble blacksmith, plying his trade in his homeland of France. But his child has died, and his wife has committed suicide; what's more, a corrupt priest has just swung by the blacksmith shop to let him know that his wife, having taken her own life, is damned to hell. Balian loses his temper and kills him.

Fortunately, a great knight on his way back from fighting in the East (Neeson's Godfrey) has just stopped by Balian's town. Godfrey happens to be Balian's dad (he did a lot of tomcattin' around in his youth), and he has just the ticket to cheer Balian up: Why not join the religious wars raging in the far-off Holy Land? Normally, a quick trip to Vegas would do the trick, but bullying fellow humans into Christian conversion will do in a pinch.

So Balian sets out for Jerusalem, eventually meeting a leper king in a silver mask -- that would be the enlightened Christian King Baldwin IV, played with great vocal authority by Edward Norton -- as well as various European crusader types intent on destroying the fragile peace in the Holy Land, which is due largely to the restraint of the sensible and intelligent Muslim leader Saladin (played with charismatic dignity by Ghassan Massoud). Great clashes ensue: There are so many battles in "Kingdom of Heaven" that it's easy to lose track of them. What's more, it's so hard to follow what's going on in these battles (as well as exactly why they're happening in the first place) that they turn the movie into one long gray smudge of action with some talking in between. To break up the endless sword clanging and arrow slinging, characters utter jaunty lines like "The blacksmith is the man you seek!" "So -- how find you Jerusalem?" and, my personal favorite, "I once fought two days with an arrow through my testicle."

"Kingdom of Heaven" is a similar test of fortitude. This is muddled and oppressive storytelling (the script is by William Monahan) dotted with elaborate but weightless battle sequences: The rallying cries of the various warring factions, their noble sacrifices, their sheer numbers -- all of it seems carefully calculated by Scott to fool us into thinking we're not in the Middle East but in Middle Earth. But unlike the battles of the "Lord of the Rings" movies, these "historical" skirmishes have little gravity. Since we barely know what's at stake -- we're too confused and bored to care -- all this fighting means nothing to us, and yet Scott still hopes to rev us up with it. He pretends to ask the anguished question "Why must mankind fight?" even as he's really just rushing to the convenient answer "I dunno, but gosh, doesn't it look cool?"

Scott, of course, wants to have it both ways. He sincerely believes he's trawling history for important moral lessons that we can put to use today, and he thinks he's being profound by applying convoluted but ultimately simplistic storytelling to complicated modern problems. His thinking is muddled and murky. When Bloom encounters a group of Muslims giving praise to Allah, he remarks that their prayer "sounds like our prayers." Imagine -- Muslims are people just like us! If Scott had his druthers, he'd whirl the world's religions in a giant blender and come up with a frothy milkshake we all could share. Religious conflicts, border disputes and anxieties about terrorism would be instantly dissolved with a handshake and a goat's milk ice-cream cone.

In Scott's view, religion isn't the root of the world's problems -- people are. But if we need a movie to tell us that, "Kingdom of Heaven" sure isn't it. The picture doesn't have the brooding emotional power of Scott's "Gladiator" (largely provided by its star, Russell Crowe). It doesn't even have the cheerful ludicrousness of "Troy" and "Alexander." Scott never lets us forget he's a big-time filmmaker who's serious about his craft, which means he uses lots of fat close-ups that explode the frame for no good reason. (Cinematographer John Mathieson gives us lots of great, sweeping landscapes, if that's the sort of thing you're after.) A few of the actors manage to thrive even in the death ray of Scott's self-important vision, most notably David Thewlis as a Hospitaler (or knight-confessor) and Jeremy Irons as Tiberius, advisor to King Baldwin. And Eva Green, who made her debut in Bernardo Bertolucci's lovely political-pop-culture reverie "The Dreamers," plays Baldwin's sister, Princess Sibylla, with a measure of cool that defies her surroundings: She doesn't quite know what to do with her character's stilted dialogue, but she carries herself so regally that you barely notice.

Bloom doesn't fare so well. Balian and Sibylla go to bed together (although because this isn't a movie about romance and other ewky stuff, Scott barely gives them a single love scene), and you have to wonder what she sees in this supposedly brave and principled thinker-warrior (not to be confused with a tinker-tailor or soldier-spy). Bloom reportedly gained 20 pounds to play Balian, but he still looks in danger of blowing away any minute. When he opens his mouth, a painstakingly noble squeak comes out. That shouldn't matter so much if you ascribe to the thinking that wars are won with brains, not brawn. But epic heroes need to have at least a soupçon of presence, and Bloom, although good-looking in a "the dog ate my homework" kind of way, just doesn't have what it takes to hold down a picture as gargantuan as this one tries to be. "Kingdom of Heaven" is a big movie that asks the big question, "So -- how find you Jerusalem?" The answer is, not so hot.