Till death do me part

This weekend, Kevin Nadal will marry himself. He wants to make a statement that the choice to be single is as valid as the choice to get hitched. He also wants a new sno-cone maker. 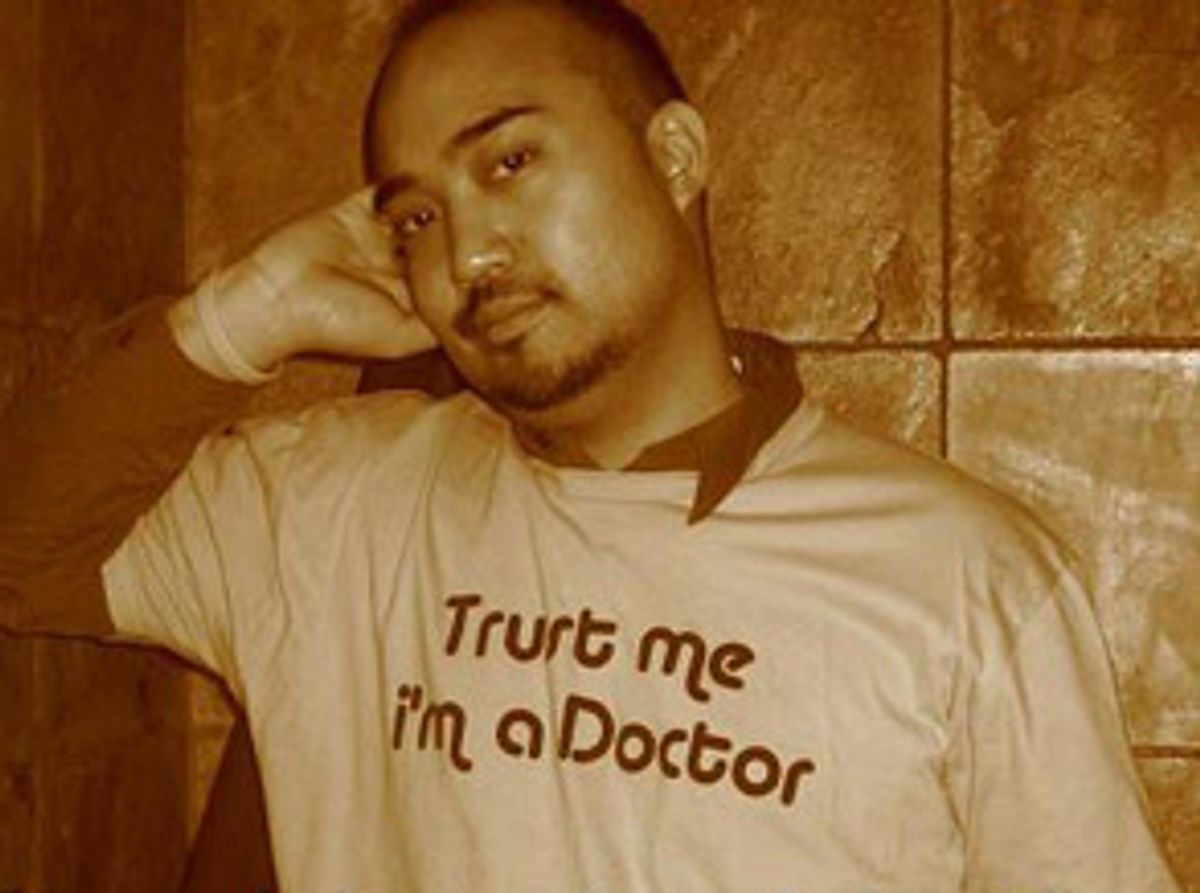 Ah May, the time of year when the New York Times' Sunday Styles section fattens up with wedding pages, and blushing brides-to-be prompt statewide manhunts by lopping off their hair and booking bus tickets to Albuquerque.

There's one guy, here in New York City, who's not about to flee from his intended. That's because he is his intended. Meet Kevin Nadal, 26-year-old "psychologist and performance artist," who, according to an e-mail he sent last week, is kicking off "the hottest new trend to celebrate single life" by "getting married to himself" on Saturday, May 7, in Manhattan. Dress is black-and-white semiformal.

Nadal's save-the-date cum press release led me to his wedding Web page, where the mustachioed singleton poses loungily in a "Trust Me, I'm a Doctor" T-shirt. According to the Web site, "Friends and family are encouraged to fly into New York, in the same way that I am encouraged to fly to California or Michigan and Hawaii for their weddings ... But we won't be celebrating the love of two people; we will only be celebrating the love that one person has for himself, as well as the love that he has for his friends and family ... It's not just a party. It's my 'special day.' It's the day that a boy has been dreaming of all of his life."

Reached by phone, Nadal said that he started planning for his "special day" in January. Naturally, he was inspired by an episode of "Sex and the City" in which Carrie Bradshaw celebrates her independence by registering for a pair of Manolo Blahniks. (Incidentally, if anyone knows of a social or romantic trend that was not inspired by "Sex and the City," please contact this reporter.)

Nadal writes that though he doesn't plan on getting married (to anyone else) anytime soon (it would be a challenge in any case; Nadal is gay), he does "plan on living the wild, crazy, non-stop single life that I have been living ... remaining career-oriented, in pursuing my academic and entertainment dreams. Where is the celebration for that? Where can I register for that?"

Apparently, at Target, Amazon, and Bed Bath and Beyond. Among the many items on Nadal's wish list are a sno-cone maker, the Anti-Stress Comfort Wrap, a microdermabrasion kit, a heated eyelash curler, a Mr. Beer deluxe home microbrewery kit, a "Guys Gone Wild" tape, the book "Global Divas: Filipino Gay Men in the Diaspora (Perverse Modernities)," and a lint remover. So far he has already received a Conair Nose/Ear Hair Trimmer. "What I didn't register for was sheets or linens or china or things like that," said Nadal. "I registered for things that would be practical for me."

Nadal has what he calls a "bridal party." "I don't know why I called them 'bridal,'" he said. "I never thought about calling it a groom's party." There are a maid of honor, best man, seven bridesmaids, seven groomsmen, one (grown-up) ring bearer, four (grown-up) flower girls, a "master of ceremonies," and 11 primary and secondary "sponsors." It's enough to make Jennifer Wilbanks hop a Greyhound.

Nadal is originally from San Francisco and has been in New York for three years, getting his Ph.D. in counseling psychology at Columbia. (The "Trust Me I'm a Doctor" T-shirt is a little premature.) Nadal has also toured the country with his one-man show, "Pinoy," about growing up Filipino in the United States. He describes himself as single, but "dating a lot of different guys at the same time."

Nadal said that he's having his wedding because "there isn't anything to show that my choice to be single is just as valuable as someone's choice to get married and have a family. Before, being single used to mean that no one wanted you, that you weren't attractive enough. Now it's a choice."

Also, he's a little testy about the cash he's hemorrhaged for rental cars, plane tickets, new outfits, and gifts for all of his hetero friends' celebratory passages into traditional family life. I asked him if this self-marriage was about exacting revenge. "I love going to friends' weddings to celebrate when they do find love and have kids, because I enjoy life and they've created life," said Nadal. "But there is a little bit of resentment because they get to live this life that is perceived as normal and celebrated all the time."

But, as I suggested to Nadal, perhaps those who choose to get married or have kids are doing something worth attention. Not because it puts them squarely in some heterosexual, traditional, femme-couvert camp of Bush-approved "family values," but because getting married and having kids is -- or should be -- a serious commitment. Those who choose to do it give up their independence; they pledge responsibility and fidelity and financial support to another human being. It's a big burden to take on.

But Nadal sees it differently. "Being single is just as difficult and just as much of a commitment," he argued. "It's a commitment you have to yourself. But it's just as straining and there are just as many hardships." He continued, "What about commitment to being career oriented? Or to finding love and not settling for anything else? Or to being alone and being satisfied? Who's setting these norms of what's considered commitment and what's considered an accomplishment?"

Nadal says he expects 120 guests at the wedding, which will take place at a loft space in the West Village that was -- sigh -- the set for Samantha's apartment on "Sex and the City." Nadal said the wedding will feature Filipino and American traditions like garter and bouquet tosses and a money dance, and that many members of his family will attend, though mostly cousins and siblings from his generation. His own parents, he said, "don't understand the concept" of the self-wedding" and will not be there. Guests will be coming from Oregon, Maryland, Massachusetts, California and Michigan. The night before there will be what Nadal calls "a rehearsal outing" to a local lounge or nightclub for the bridal party. He's paying the $6,000 wedding tab himself, saving money by serving catered hors d'oeuvres and avoiding what he called "the fancy hotel thing." "My single person's wedding doesn't have to be an extravagant sit-down dinner," he said. "The most important things are alcohol and a DJ."

There won't be an officiant, but Nadal will read himself some vows. "I'll say things like 'I take me to have and to hold and love and cherish through sickness and in health,'" explained Nadal. "I'll also say things people say in corny marriage vows, like that I have found the man of my dreams, my soul mate, the man I've been waiting for all my life."

I asked Nadal if he felt like his impending marriage will change his relationship ... with himself. "I'm generally happy with myself," he said. "I hope it will change the way others view single life. Maybe those who are happy having traditional families can understand that other people might not want that life."

But what if Nadal someday does want that life? He's 26, turning 27 on the day of his wedding. Right now he might be living the "wild, crazy, nonstop single life," but what if someday he falls in love? "I am open to meeting someone down the road," he said. "Now I want to celebrate being single. If I want to get married to someone else someday -- even though it might not be recognized in most states -- I'll do it again. When heterosexual couples have a second wedding, their friends have to go to that second wedding too."