Not even Paris Hilton's acting is very scary in this middling slasher flick. 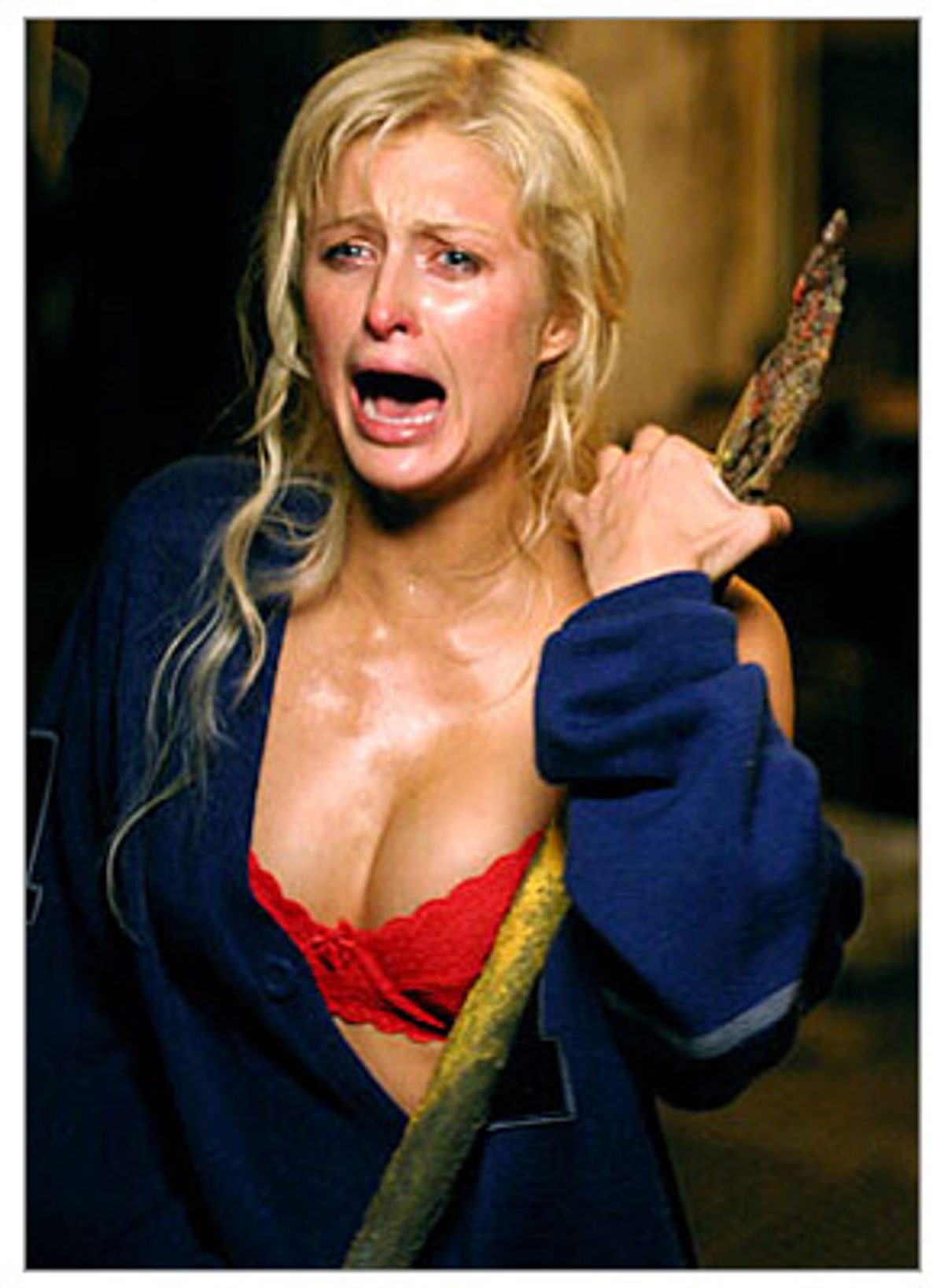 If only it were possible to successfully make fun of Paris Hilton. Plenty of people think they've pulled it off, convincing themselves that their snarky comments about her overexposure, her bland pedigreed looks, her sexual foibles, her rich-girl sense of entitlement actually constitute satire. But Hilton is Teflon, because to satirize her in any meaningful way means needing to find something there in the first place. And to use a cliché -- often the only way to write about a cliché -- there's no there there. Her satin-blond hair and blank silver-moon face are a reflective surface against which we can bounce our allegedly clever wisecracks and our resentment. We walk away thinking we've won, when really all we've done is covered ourselves in the splashback of our own inferiority, as she laughs all the way to the bank (which she practically owns already, anyway).

Paris Hilton is the big draw in Jaume Collet-Serra's not-really-a-remake horror-slasher thriller "House of Wax," and she'd have to be: There's so little else going on in it that you find yourself waiting for her few brief scenes, if only because the bright colors of her Juicy Couture track suits and matched-lingerie outfits at least break up the monotony of all that hacking, clunking and sawing.

Cheap horror movies are all about formula, which is part of their fun: We don't want surprises, only shocks. When we see a half-dozen teens out in the woods with a broken-down vehicle, we know some, if not all, of them are going to die. Which one will get an ax in the head? Which one will get a pike through the sternum? And so on and so forth. Slasher movies are one of the few genres where cheapness and ineptitude are potentially positive attributes. But only to a degree, and "House of Wax" stretches our generosity to the breaking point. Its pacing is so pokey that its minimal thrills and dim-bulb wit barely register. Before long you find yourself idly counting off bodies, waiting for the last one to be stabbed, clubbed or pierced so you can fold up your tent and go home.

Elisha Cuthbert (of "24") and Chad Michael Murray ("One Tree Hill" -- wouldn't that title be perfect for a Kiarostami movie?) play teenage twins who are so close they barely get along. They head out with some pals (among them Hilton, Robert Ri'chard and Jared Padalecki) for a big school football game, before which they'll camp out in the woods -- why not? They find a stinky pit filled with rotting roadkill, and meet the toothless local (Damon Herriman) who's dumping stuff there. As it turns out, they need a new fan belt for one of their cars. The local dude offers to drive two of them to town; gratefully and just a wee bit warily, they take him up on the offer.

The burg of Ambrose is, of course, a ghost town, complete with an abandoned wax museum loaded with spooky figures of nobody in particular. Also, impressively, the entire building -- including the walls and the furniture -- is made entirely of wax. This monstrous work of art may or may not be the legacy of one Trudy Sinclair, a wax-figure sculptor who, years ago, went crazy and died. But not before her husband, a mad surgeon, did some fancy scalpel work on the couple's conjoined infant twins (the grown-up versions of whom are played by Brian van Holt).

"House of Wax" is filled with the usual contemporary horror staples, most notably lots of rusty torture implements and cellphones that tend to scurry mischievously out of reach just as the villain bears down on his prey. The gory stuff includes, but is not limited to, the super-gluing of human lips (actually, it's gorier when they're pried apart) and the snipping off of a fingertip with a pair of wire cutters (easy come, easy go). The actors muddle through valiantly enough: Cuthbert, in particular, is easy on the eyes and doesn't stretch the bounds of high-school heroism too unbelievably.

But who cares about her? Hilton is the one everyone has come to see, and her indolent, dull coolness does not disappoint. (Here's where the spoilers start, so if you want to be 2000 percent surprised by "House of Wax," please stop reading now.) (I mean it. If you read any further, it's your own damn fault.) "I wanna see her get it!" I heard someone cackle as a bunch of us filed into a large public screening. During the course of the movie, whenever Hilton appeared, I'd hear cries of "Kill her!" The audience cheered when she finally bit the dust. But after that -- there was nothing to see. The only thing left to do was to sit through the rest of the movie, Hiltonless. And what fun is that? No more making fun of her deadbeat acting (which does have a glimmer of whimsy to it -- she knows not to take any of this too seriously). No more ogling her svelte spa-princess rack. No more bouncing our meticulously honed sophisticated bons mots off her blank persona. With no more Paris Hilton, there's no one left for us to kick around. And where's the fun in that?