It wasn't until the fourth year after her death that I truly understood the gifts my mother -- a mess like all of us -- had left me. 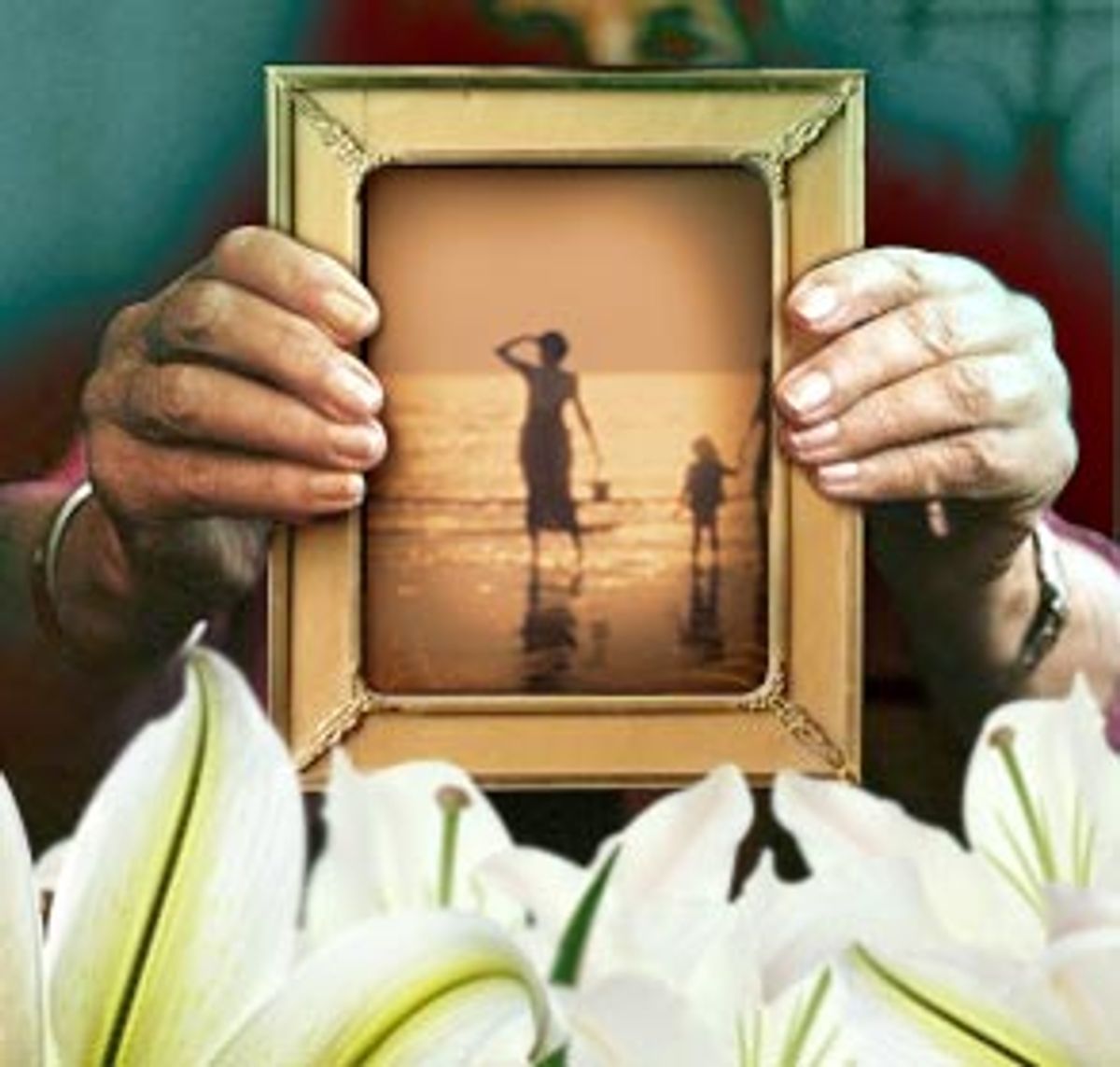 After two nights in a row of insomnia, I finally got to bed the other night at a reasonable hour, only to be shaken awake at midnight by my 15-year-old son. My first thought was that we had an intruder, and I reached for the tennis racket I keep by my bed in case I needed to kill someone. "No, no, Mom, I just can't sleep," he cried out plaintively.

"That's terrible," I said, "to wake me, just because you can't sleep."

"But you're my mom," he said. "I'm supposed to come to you with my problems."

The first year after my mother's death, I felt a lot of sadness that I hadn't had a mother to whom I could take my problems. She was my problem, or at any rate, this is what I had always thought and continued to think. Mothers are supposed to listen and, afterward, to respond with some wisdom and perspective, but these things were not my mother's strong suit.

If you asked me, parents were supposed to affect the life of their child in such a way that the child grows up to be responsible, able to participate in life and in community. For instance, you teach a child to play so he can stay healthy, and have fun, but my mother had so pressured me to achieve at tennis that I had migraines until I quit playing tournaments. And you teach a kid to pick up after him or herself, and to make the bed in the mornings, so the kid doesn't see the mother as a servant, vibrating with martyrdom. This teaches a child that she is part of an organism, the household, and must respect her relationship with the other inmates enough to smooth the covers, and remove any socks or juice boxes that are leaving a discernible bump. But the thing is -- and I mean this nicely -- my mother was kind of a slob, and I was too, until I got sober.

The fact that my mother's bed always looked like Krakatoa is actually a decent metaphor for many of the things she forgot to teach me. She made her psychic bed with a mate who felt contempt for women. Her bed was littered with wrappers and crumbs, because she did not know how to separate her pain from the great amount of food she ate, and I had to fight like mad to heal from eating disorders. She didn't know that you can take care of the inside of things -- like people, or your own heart -- by tending to appearances, or surfaces: You put on a little blusher or moisturizer, or you make the bed.

So because she didn't usually teach me things that helped me get through life, I didn't go to her with my problems. I went to a man, to my father. He could listen. He taught me most of life's important rules, the ones I have passed on to my son, Sam: 1) Don't act like a pig. 2) Don't cross the intersection right after the light turns green. 3) When all else fails, follow instructions. 4) Try to take a long walk every day, and keep your eyes and ears open for birds. 5) Assume that all drivers on the road are ignorant of Rules 1 and 2, or that they drive like Nana Miller.

The second year after my mother died, my child became a teenager. I knew by then that adolescents are always trying to shred your respect -- that's their job. They are trying to individuate, which seemed natural when I was doing it with my mother, but which is wrenching now. There was a huge difference, though, in my mother's house when she was raising teenagers. In my house, not everything becomes a pitched battle.

For 35 years now, since I was 16 and Ms. magazine first came out, other girls and women have been telling me their deepest secrets and truths, and we have been laughing ourselves sick -- or, rather, well -- over this stuff. I learned that women could stand up to anyone, and that it was OK to be angry, and that, in fact, if you were over 13 and had been raised in America and were not furious, there was something wrong. So I had gotten to be really angry along the way, but my mother hadn't gotten to be. She stuffed it, she ate at it, and it ate at her and ultimately made her crazy. As a child, I was dependent on someone who was always on the verge of implosion.

I was able to scatter her ashes during the second year after her death, was able to cry and to feel a huge sadness, for both of us. I ached for her, for all that had been so impossible for her to bear, for the bad cards she had been dealt. But I was still fighting for my life, about to turn 50 and still trying to learn the things she forgot to teach me -- that I was beautiful, that I had to tell the truth, even with men and business associates, that what I saw and sensed was pretty reliable. I saw her as the foil, believing that I had grown to be a lovable, strong and sometimes wild person because I had had to resist her so ferociously.

I didn't write about my mother much in the third year after she died. I was still trying to get my argument straight: When her friends or our relatives wondered why I was still so hard on her, I could really lay out the case for what it had been like to be raised by someone who had loathed herself, her husband, even her own name. (She went by Nikki, which was the name of a girl on the radio in Liverpool when she was little.) Anyone could see why I had had such a hard time with her, and what an infinitely good daughter I had been to take such good care of her anyway, her entire life -- well, except during the worst years of my adolescence.

However, this left me without a mother, except for the mother of jokes and reminiscences with people to whom she had been close. Except for the mother I could do a dead-on impersonation of, with her imperial madness, her royal kindness, the poise marbled into all her self-loathing and struggles. I could even reminisce with my boyfriend, who never met her, because he had the same sort of queenly English mother -- with the same throat and nostrils, the same glacial kindliness, the same skittering, demanding qualities, the airs, and the high color.

But now in the fourth year of her death, I can see in my son's eyes so many things I was missing before. My mother's eyes were large and brown, like my son's, but unlike Sam's, they were always frantic, like a hummingbird who can't quite find the flower but keeps jabbing around. I can see in Sam's what an embarrassment I am sometimes, with my hippie clothes, my anxieties, my many mistakes. I can see that he understands, at a much earlier age than I did -- again, because his mother was raised with women's liberation -- that we are all doing the best we can, and that some days go better than others. I can see how much Sam does for other people. I can see his deep sensitivity, beneath the annoyance of having to live with him on bad days. I see us explode, and apologize, and that this is redemption, over and over again.

I see that children fill the existential hollowness many people feel; that when we have children, we know they will need us, and maybe love us, but we don't have a clue how hard it is going to be. We can't understand when we're pregnant, or when our siblings are expecting, how profound it is to have a shared history with a younger generation: blood, genes, humor. It means we were actually here, on Earth, for a time -- like the Egyptians with their pyramids, only with children. It's a great experiment to wait and see what will come of it. With buildings, the result is often fantastic, but with people, the result is almost always a bit of a mess.

And that is what my mother has given me in the fourth year of her death. I can see with my spirit's eyes that out of that mess came a bunch of gifts -- of generosity in the midst of being broke, of survival and, most of all, of having a gift for friendships. These are what my mother had in spades, and what I have, too. This is what our family and friends remember -- how she always bailed people out and helped people not feel poor, even if that meant going into debt herself. How so many women of her generation were wiped out by the whacking down that life gave them, but how my mother stayed one step ahead of the abyss with a series of Monsieur Hulot-like lurches and side steps, until finally, the plague of Alzheimer's filled her brain.

The other day, I found a description of something I'd written the summer before she died, when she started calling me to tell me she was getting us the great box, with cheese! It was going to be so wonderful. "What box, Mom?" I kept asking, and she'd get furious with herself and then with me. And she'd call the next day to say she had gotten us the box.

"It's not a box containing cheese?" I asked, thinking of Pepperidge Farm crackers.

"Oh, for Christ's sake," she snapped, and hung up.

I went down to her apartment the next day, and when she opened the door, she said, "The man brought the box!"

I stepped inside to see, and there on her television set was a cable box that she'd rented so she and I could watch Wimbledon together on pay-per-view. Then she flung open the refrigerator door to show me all the cheese.