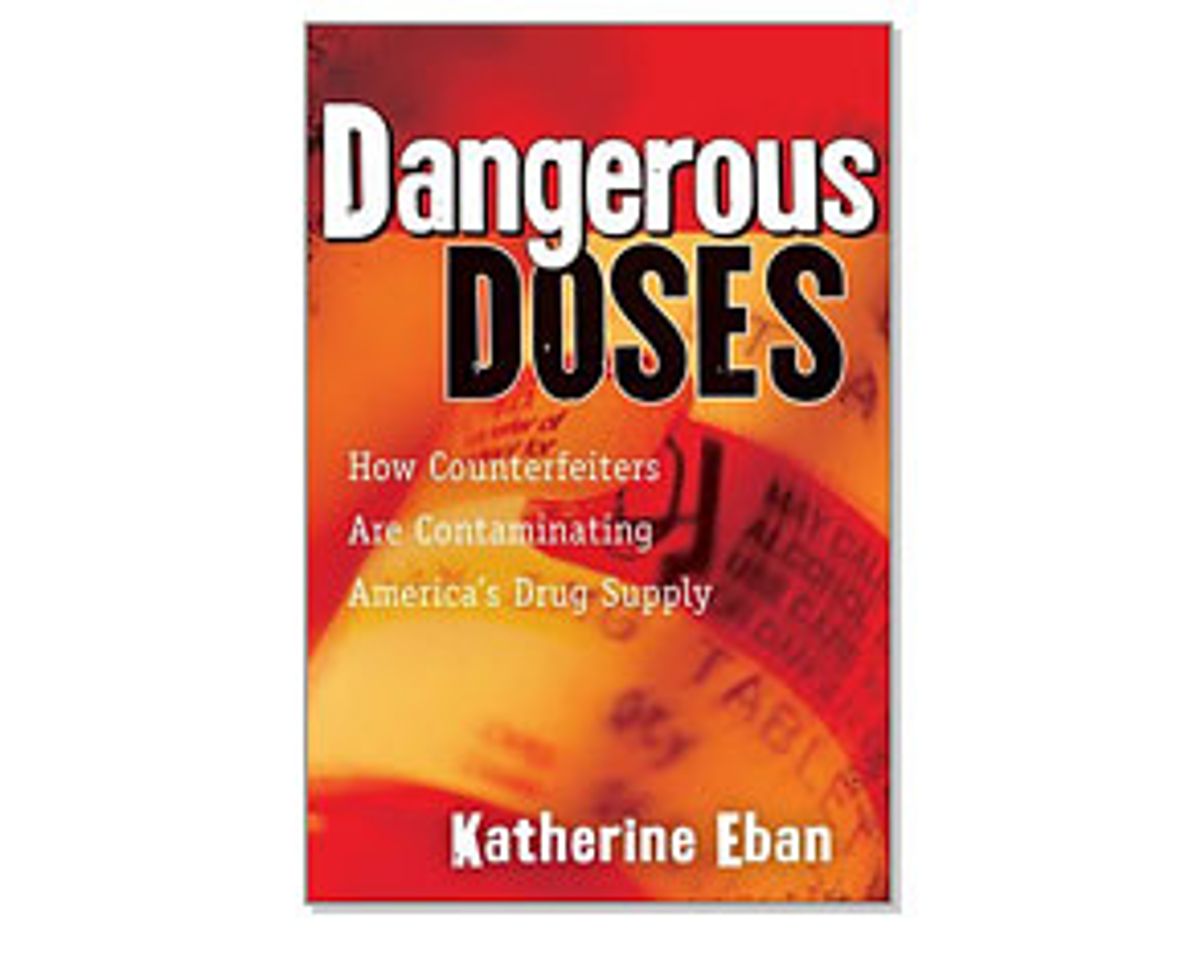 They call themselves the Horsemen of the Apocalypse, and they hold meetings at Hooters. Their uniforms consist of black polo shirts emblazoned with a pack of horses flanking the Grim Reaper, who's wielding a scythe. One Horseman's name is Venema, which rhymes with "enema." But he prefers his code name: Ice Station Zebra. These dubious characters are the good guys in "Dangerous Doses: How Counterfeiters Are Contaminating America's Drug Supply," by Katherine Eban, an exposé that wades into more rank Florida unseemliness than a Carl Hiaasen novel, and easily boasts three times the number of sleazebag villains.

The Horsemen of the Apocalypse are the five men -- cops and drug inspectors among them -- behind Operation Stone Cold, an effort to bust dealers trafficking not in heroin or coke, but in stolen, degraded and phony prescription drugs that end up swimming in the veins of cancer sufferers and liver-transplant patients. Their investigation begins in South Florida, but the Sunshine State hardly has a lock on the growing market in adulterated meds: The Horsemen discover links to the phony pharmaceuticals chain in Texas, Ohio, Arizona, Virginia, Tennessee, Georgia, Utah and California, some of them merely shell companies. Among the confirmed victims of the trade are patients in Long Island, N.Y., and Missouri.

This is arguably an even shadier business than supplying addicts with their latest fix. Because it's most profitable to forge the most expensive medications, which are prescribed to the sickest patients, it's precisely the people whose survival is at greatest risk who are most vulnerable to receiving degraded, contaminated or just plain fake meds. Indeed, one of the men suspected of trafficking justifies his line of work with this tasteful rationalization: "They're going to die anyway."

The fact that Americans pay more for their drugs than anyone else in the world paradoxically makes U.S. citizens more vulnerable to receiving counterfeit or degraded drugs, not less, Eban argues. After all, it pays to scam the highest-paying customers. Moreover, U.S. patients can thank the fed's war on drugs for bringing criminals into the business of trafficking in prescription meds. She reports that it's just another unintended consequence of the crackdown on illicit substances. When enforcement got tougher and sentences got longer for dealing in drugs like crack and heroin, suddenly dealing cancer meds acquired under suspicious circumstances looked like a gentlemanly alternative.

If you were a trafficker, the prescription drug inspectors -- of whom there were few to begin with -- couldn't do that much to you. Sometimes it took months for a wholesaler even to lose his license to sell drugs in the state as a result of making a sketchy sale. The fines, much less sentences, for violating the rules were negligible. That is, until a prosecutor who depended on diabetes medicine every day thought to go after the prescription drug perps using the same racketeering laws employed to bring down the Mob. She dubbed the suspects "stone-cold killers" -- hence the name of the operation -- and saw them as guilty of "nothing short of murder by the inches." Following Operation Stone Cold, as it makes 55 arrests, and uncovers $33 million in bad medicine and $3 million in dirty cash, Eban traces the creative strategies these prescription drug dealers use to move hot, bad or fake product. Among them: Corrupt drug wholesalers steal prescription drugs, and then sell them back into the drug supply chain. They reroute drugs meant to be sold overseas back to the U.S., where they can command a higher price. They change the labels on less potent drugs so they can sell them for a bigger profit. They even buy meds off of Medicaid patients, who prefer the cash to the possibility of feeling better. Some of these drug dealers go so far as to actually brew up fake meds, and market those.

Who gets into this kind of work? Well, there's the doctor who supports his own addiction to prescription medications by dealing in contaminated ones. He co-owns a low-rent strip club, called Playpen South, and uses it as a front for the dealing that takes place in the club's backroom. This M.D. boasts that he once split the penis of a gay man in two so he could "entertain two lovers at once."

Then, there's the convicted cocaine dealer who greets police wearing only boxer shorts and an electronic monitoring bracelet around his ankle, which he sports as a condition of his parole. Another suspect works as a drug counselor in a treatment program, so he can steal patients' identities and use them to open shell companies to move sketchy prescription drugs around. And then there's the guy whose secretary for his drug wholesaling business is also his lover of eight years, through three of his marriages. "I can honestly say we beat out the Jerry Springer show," marvels one investigator at the man's bail hearing.

And these prescription drug dealers make a fortune -- one of them garnered a profit of $700,000 in a single month. Several live in Florida's poshest gated communities, their homes tricked out with Sub-Zero refrigerators, copper pots, flat-screen TVs and computer monitors. At one point, the Horsemen fear a suspect is on to them and is about to flee. It turns out he's just moving into an even more extravagant house nearby.

Eban presents all these salacious details in a deadpan style. Which is a good thing, since the subjects of the book -- both the suspects and the investigators -- provide more than enough color: "If the Horsemen even lagged, Venema would exhort: 'Never let a day go by without annoying or aggravating a bad guy or an attorney!' or he would explain that The Bible had some inaccuracies: 'The meek will not inherit the earth,' he would say. 'The meek will inherit flame throwers and cruise missiles!'" This same special agent so treasures the fruits of his late-night dumpster diving in suspects' trash cans for incriminating documents that "pungent odors now wafted from his office, where he kept his best finds."

Eban mostly lets this stranger-than-fiction cast of characters tell the story, which makes it engaging, even though it's essentially about government failure. The real cause of the corruption of the drug supply isn't the money to be made. It's a weak regulatory system, which doesn't require complete proof of the route a drug takes from its manufacturer to the pharmacist. That opens the door for all kinds of shenanigans among the colorful, corrupt middlemen. The drug industry lobbyists say it would be unduly expensive to keep such records, and that they aren't necessary, even as Operation Stone Cold uncovers more and more stolen, fake and mishandled medicine. And the government continues to buy that argument, even after no lesser force than Gov. Jeb Bush convenes a grand jury to look into the matter. (What it turns up is horrifying to all involved.)

The Food and Drug Administration continues to maintain that a patient has a better chance of being struck by lightning than of taking bad medicine. But Eban makes a convincing case that while Bush and Co. keep talking about the hazards of U.S. citizens' buying prescription drugs at cheaper prices from foreign markets, such as Canada, the FDA can't credibly guarantee the safety of the U.S. drug supply. What it would take to do so would piss off the ostensibly legit drug wholesalers, who profit massively by looking the other way when they're sold goods of dubious origin by less reputable suppliers.

In the end, the Horsemen make a lot of drug busts -- as you'd expect in a thriller. However, since this is real life, we don't get the satisfaction of knowing that justice has been done. Sadly, Eban's reporting suggests that despite the Horsemen's efforts, there's little evidence that the feds will be inspired to force the pharmaceutical wholesaling business to clean up. After all, the patients are going to die anyway.