After a lifetime of dealing with depression, I finally started taking medication -- a few weeks before I got pregnant. The drugs changed my life. But did they change my baby's, too? 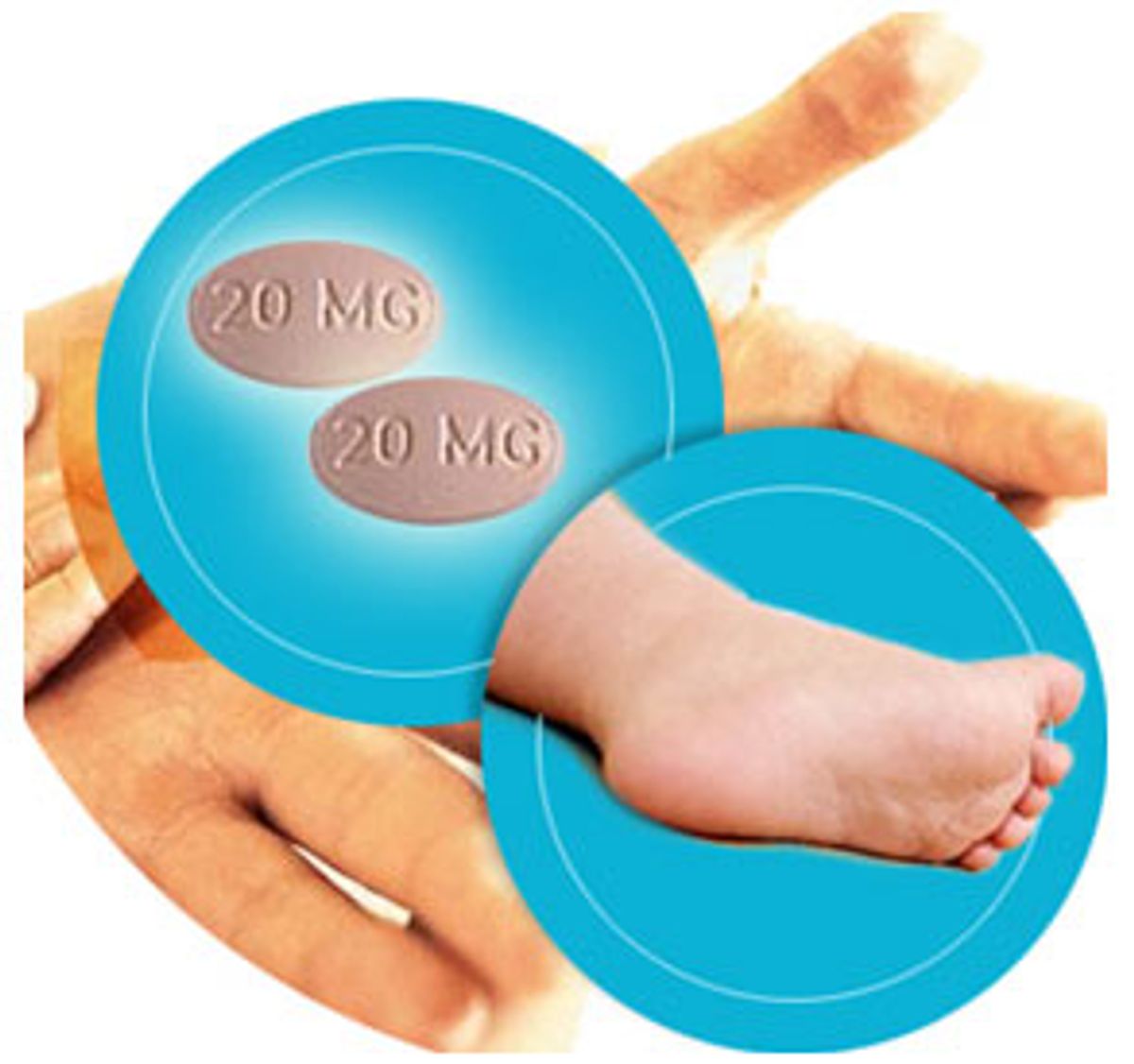 None of my children are perfect. There is one who bites her toenails, another who spends his free time working to achieve the perfect armpit fart. They have twisted baby toes and hooked noses, crooked teeth and ears that stick out. But these imperfections do not disturb me. I note them the way you see and remember everything about the topography of your children's bodies, but I don't worry about them. I don't wonder about where they came from or if they are symptoms of other, more serious conditions. Except when it comes to my youngest child, Abraham. I assess every one of my fourth child's flaws and minor disfigurements with the cold eye of a clinician, appraising and evaluating for tiny chromosomal mutations, subtle hints of genetic or gestational damage. Are the traces of fuzz on his upper lip and between his eyebrows signs of some underlying disorder characterized by unusually thick infant body hair? Is his small chin receding enough to be considered a birth defect? Why couldn't he breast-feed? Why does his foot turn out, causing a hitch in his step?

My pregnancy with Abraham was an accident that coincided with my initial diagnosis of bipolar disorder. After a lifetime of struggling with my moods, of cycles of rage and euphoria, of bouts of optimistic productivity alternating with pessimistic despair, things finally got to the point where they threatened the stability of my marriage and my family. I began taking a low dose of the SSRI Celexa two weeks before I realized I was pregnant, and I noticed the change right away. I no longer found myself exploding with unwarranted anger at my husband, my children, or bank tellers. I did not wake in the morning and consider my life, my family and my work with a morose and helpless gloom. On the contrary. I felt light. It was as though the acrid gray fog that had been poisoning my perception simply blew away and I could finally see and be myself.

Then, after two weeks of pleasant calm, I found myself sitting in my bathroom, pants around my ankles, staring in shock at a pregnancy test flashing two cheerful pink lines.

I stopped the drugs right away. I made this decision on my own, not so much consulting my psychiatrist as informing him of my decision. I'd never allowed myself to indulge in anything during my other pregnancies. I didn't drink coffee, I went off ahi and gorgonzola, I avoided the products of both Napa and Humboldt counties. It never occurred to me to stay on the meds. I wasn't profoundly mentally ill; I wasn't about to leap off the Golden Gate Bridge. I was just mean and unpleasant, given to fits of weeping and flashes of inexplicable rage. And isn't that how pregnant women are supposed to feel?

Except that I'd had two weeks of something different. I had had two weeks of contentment, two weeks of being in control. For two weeks when my older children fought over whether to watch "Thomas the Tank Engine" or "The Simpsons," when my husband forgot to pick up the dry cleaning, when an editor passed on one of my short stories, I responded with equanimity, with disappointment, perhaps, but never with apoplectic gall or soul-crushing misery. I now knew what it was like to be a person whose happiness was governed by the conditions of her life not by those of her brain chemistry. Even more important, my family now knew what the experience of stability was like. Did we really have to give it all up?

I turned to the Internet. The pregnancy Web sites gave forth with a chorus of reassurance. Care should be taken, of course, but if my well-being required it, I should go ahead and take my antidepressants. Define require, I thought as I read. How bad did things have to be before I could safely put myself in that category? I read further and found a Danish study that showed no damage to infants from maternal use of SSRIs. An analysis of Swedish birth records confirmed this. I was especially comforted by this last report. Think about it. The folks who make the Volvo, the very architects of safety consciousness, seemed to be telling me that even if I wasn't in danger of slitting my wrists without it, I could still take my medication. I didn't have to be suicidal; miserable and unpleasant did the trick. The Swedes gave me the green light.

This time, before I did anything, I called both my obstetrician and my psychiatrist. The research I found reassured them, too, and they agreed I could go back on the meds. I took Celexa for the rest of the pregnancy, and managed to weather events, among them the death of my best friend, that would otherwise have sent me rocketing into bouts of volatile despair.

Now, two years after Abe's birth, the British medical journal the Lancet has published a study indicating that infants exposed in utero to SSRIs may suffer withdrawal symptoms at birth. Emilio J. Sanz, a professor of clinical pharmacology from the University of La Laguna in Spain, evaluated the World Health Organization's database of adverse drug reactions, and came up with 93 cases where SSRI use was associated with either neonatal withdrawal syndrome, which is characterized by irritability, abnormal crying, tremor and feeding problems, or neonatal convulsions. The vast majority, 64, of these cases involved the drug Paxil. Sanz and his colleagues concluded that doctors should avoid prescribing Paxil to pregnant women, or should prescribe it at the lowest possible dose. In a comment accompanying the study, two Yale University School of Medicine doctors expanded that suggestion to question the "uncontested SSRI hegemony," and suggested that doctors should "perhaps recalibrate our personal prescription thresholds (especially during pregnancy, lactation, or early childhood)."

Abe had no convulsions, no constant crying or breathing difficulties. But he did have feeding problems, and he never learned to nurse, despite six months of aggressive intervention. When this study showed up on the front pages of newspapers, I felt a nauseating twist in my gut.

All along I'd been watching Abie, wondering if his chin failed to drop forward at 7 weeks' gestation when it should have because of the medication I was taking, wondering if his failure to latch on to my breast was a sign of something deeper and more profound. I'd googled the words "hirsute" and "birth defect." I'd cupped his sweet, long foot in my hands and worked his little ankle, trying to figure out how its deformity could be blamed on womb positioning as the doctor said, and if, somehow, the drugs that make me feel so good could have caused my baby to hover uncomfortably in the very place in which he should have been most secure. Now, here was the Lancet telling me that I may have made a terrible mistake. In seeking to spare my other children and myself nine months of unhappiness, had I put my child in harm's way?

The medical community is far from unanimous in its view of the ramifications of the Lancet study. Dr. Lee S. Cohen, the director of the perinatal psychiatry program at Massachusetts General Hospital, has expressed reservations, calling into question both the methodology, in which adverse outcomes may tend to be overreported, and even the use of the term "withdrawal syndrome." He said that what SSRI-exposed babies experience has so little in common with acute heroin or methadone withdrawal, for example, that to use the same terminology is confusing at best. Cohen's concern is that mothers who are at risk for severe depression will avoid SSRIs not just in the immediate peripartum period (the third trimester), when exposure may carry the most risk for their newborns, but throughout their pregnancies.

Recently, I asked my own obstetrician, Dr. Arzou Ahsan, if in light of the Lancet study, she would still advise me to stay on Celexa through a pregnancy. Her answer was immediate and clear. Yes, she would still recommend a low dose of any SSRI other than Paxil. She said she had concerns about the Lancet study, saying it was difficult to determine its clinical significance. The conclusions drawn from a study that mines large databases for instances of drug reactions are less clear than those that could be made from, say, a double-blind study where researchers have more information on individual patients. Unless and until there is more convincing evidence of harm, the benefits of SSRI use are so great that she feels comfortable recommending them to her patients who really need them.

My psychiatrist, on the other hand, was less sure that his advice would remain the same given the recent study. He reminded me that the decision to take any medication during pregnancy, indeed my decision to take Celexa during my pregnancy with Abraham, involves a risk-benefit analysis. Does the benefit to the mother outweigh the risk to the baby? The Lancet study pushes that analysis further in one direction. My psychiatrist pointed out that Sanz and his colleagues did not study the prevalence of neonatal withdrawal syndrome, how common it is among infants exposed to SSRIs. From their study we know that it occurs in some number of cases, but we know nothing about how frequently. Further, no one has yet determined if there is a consequence to the child beyond the initial exposure, or if it is an effect that passes with the withdrawal syndrome.

So many of us in our 30s and 40s have photographs of our mothers, a Doral burning merrily between their index and middle fingers, a martini glass balanced on their pregnant bellies. Now, those pictures seem absurd, even shocking. Most of us don't smoke when we are pregnant, we don't drink or take drugs. We modify our diets, sometimes drastically. But to a woman who suffers from depression, even minor depression, and realizes relief from medication, the thought of forgoing it can be daunting. Withdrawal syndrome necessarily means that the infants exposed in utero to SSRIs have undergone some physical changes, but as my psychiatrist perhaps facetiously pointed out, we don't know for sure that those changes are negative. It is conceivable, albeit unlikely, that it does a developing fetus good to be bathed in a steady stream of extra serotonin. At the very least, so far no studies have shown any long-term harm beyond the period of withdrawal.

Still, I feel for the pregnant women facing a decision that is suddenly much more complicated. It's hard enough to be either pregnant or depressed, let alone both, without having to make sense of conflicting medical research and objectively evaluating the quality and seriousness of your own despair. Had the Lancet study been published before I became pregnant with Abraham, I think I would have tried harder to do without my medication, at least in the last trimester, that peripartum period that the study deemed the most crucial. I would have tried, knowing the toll it would have taken on my older children, my husband and myself, in order to spare Abraham any potential harm. I would have done this, whatever my doctors' considered sound advice, bracing myself for months of upheaval and unhappiness and strapping my family in for a very bumpy ride. But the very idea makes me queasy.