Those weaned on Mariah Carey should feel emancipated by her return to form -- and her escape from Whitney's sad fate. 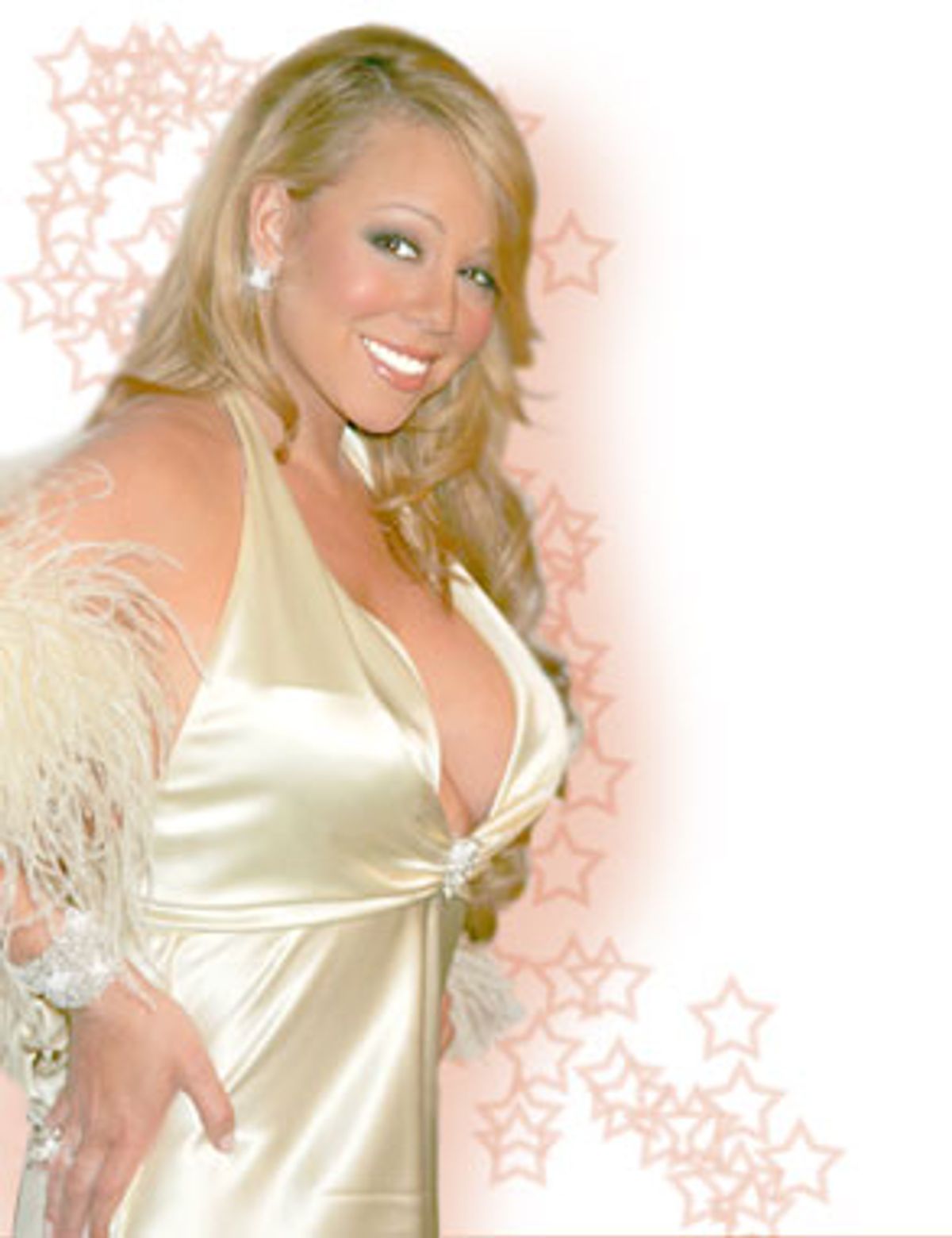 Before I moved to New York City in 1997 and gave up my car, I was one of those people who cherished commercial radio. My high school years were spent chauffeuring friends around in my Chevy Blazer, compulsively changing the dial between Baltimore's pop station B104 and Washington's unmatched alternative channel, 99.1 WHFS. In college, even as DJs were formatted out of existence, I tuned in to the Albany rock channels in that same trusty truck whenever our campus station got too earnest or obscure (which was often). I was always a sucker for the hits -- my last year with the radio left me indelibly marked by the Wallflowers' "One Headlight" and Third Eye Blind's "Semi-Charmed Life" -- even as I mail-ordered records from Teenbeat, Simple Machines and other tiny labels. To my friends I was a walking contradiction, a devotee to manufactured pop and indie rock in equal measure. And, to quote Whitney Houston, they didn't even know about my greatest love of all: Mariah Carey.

I haven't stayed in great touch with Mariah -- like I said, I pretty much stopped listening to commercial radio eight years ago -- but the memory of her from the early '90s has haunted the entire decade that has made up my 20s. As a teenager I spent countless afternoons after school, alone in my parents' living room, belting out "Vision of Love" as the video played on VH1. (As a little, little girl riding in the "way-back" of my parents' station wagon, I dreamt of being discovered by a radio executive because I knew every word to every song in the top 10 of Casey Kasem's weekly top 40. As a 16-year-old with a decent voice, I subconsciously believed that hollering along to "Vision of Love" was going to get me somewhere -- if not a record contract, then a boyfriend enchanted by my somewhat agile voice.) "Someday," Mariah's incredibly upbeat revenge hit that played on B104 at least once every hour of my junior year of high school, summed up my teenage angst and anger better than any Cure song could. And "Love Takes Time" -- has any breakup ballad ever put it better?

Around then, my true loves were probably Jane's Addiction, New Order and the Beastie Boys' "Check Your Head." But Mariah, she got to me. "But the catsuit!" exclaims a friend, recalling her outfit in the "Vision of Love" video. OK, sure. But compared with other manufactured divas of that era, Mariah was the real deal. She wrote her own songs! She could really, really sing!

For most of the late '90s, I watched from afar as Mariah coasted along, putting out more and more ballads and, eventually, a collection of greatest hits. Her outfits got worse and worse but, I must admit, I loved seeing her defiantly busting out of her clothes all the time on billboards around downtown. (Mariah is no Kate Moss.) However, when she suffered a very public breakdown in 2001, following her disastrous screen debut in "Glitter" and the tanking of the film's '80s-throwback soundtrack, I quickly snapped to, and rushed back to her side.

The press (and most of the public, it seemed) didn't have much sympathy for Mariah. I understood why. The year before, she had signed a record-setting $80 million, five-year contract with Virgin records. (The deal was later dissolved.) She had been the bestselling female performer of the 1990s, with 13 No.1 singles and more weeks spent at the top of the Hot 100 singles chart than any other artist in history. She was famous and beautiful; she was, obviously, rich; she dated Yankees shortstop cutie Derek Jeter. It was easy to think that 2001 had brought Mariah's day of reckoning: a 10-year run was enough; it was her turn to crash and burn and fade. Months later, when she finally spoke about the breakdown, she attributed her bizarre behavior -- performing an impromptu striptease on MTV, writing rambling, suicidal messages on her Web site -- to exhaustion. But it was fair to wonder, as many people did: Can someone as wealthy and successful as Mariah Carey really be more exhausted than your average fan?

I caught Mariah on "Oprah" doing damage control post-breakdown, around the time that her rebound record "Charmbracelet" came out. I was with Oprah: I felt sorry for the girl. On the show, she was surprisingly articulate and credible; when she described shuttling back and forth between L.A. and New York while making "Glitter" -- and suffering from insomnia to boot -- her breakdown seemed inevitable. Poor Mariah, I thought, spending all those nights in the studio and on red-eye flights. As she sang her inspirational hymn "Through the Rain," and explained that it was all about her personal struggle to keep going, to survive, I teared up a little. She's just a hard-working woman with a dream, I thought. She gives so much money to the Fresh Air Fund that they named an entire campsite after her. She doesn't have a husband and spends most of her time with her mom. Why do people so love to hate her?

"Charmbracelet," unfortunately, was a throwaway -- a record rushed into production with the hopes that it would erase "Glitter" and the breakdown from minds of her fans. It bombed (though not quite as badly as "Glitter") and, in its wake, things continued to look grim for Mariah's future. So news earlier this year of a second comeback, one saddled with the improbable title "The Emancipation of Mimi" (after a nickname used by those closest to Mariah), was greeted with a groan by many, including me. A few weeks ago, when "Mimi" was hitting the stores, I held my breath and said a little prayer for Mariah, expecting the worst. And when the record debuted at No. 1, I quickly exhaled. The songstress of redemption and healing had done it. As she hopefully sang a few years ago, she "made it through the rain." Mariah was back on top.

"Mimi" had a very strong first week of sales, moving 404,000 copies, and it's currently sitting at No. 2 (behind the Boss) as it approaches its first million sold. The critics, by and large, are liking it (and I am, too). The first single, "It's Like That," didn't get too far up the charts, maybe because the song is a fun but bland hip-hop throwaway that could have been sung by anyone. Indeed, Mariah's voice here, and on a few other tracks, is barely recognizable as her own. The second single, a slow jam called "We Belong Together" that cuts a bit closer to the classic Mariah mold, is faring better, hanging in at No. 7 on the Billboard Hot 100 singles chart.

"Mimi" makes it clear that Mariah's voice is not what it used to be. The record holds a few signature Mariah flourishes, but mostly the diva is subdued here, playing it safe by avoiding the highest of her five octaves and staying within a tighter vocal range. It's a little mean to say, but I honestly cringe at the thought of the woman on "Mimi" attempting the feats Mariah pulled off on songs like her 1992 MTV Unplugged cover of the Jackson 5's "I'll be There," or the triumphant pop love song "Emotions." As she ages, perhaps this is the formula for success. At 35, less of Mariah is actually more. It's a sad fact of aging, but I'm very grateful she and her smart producers (including Jermaine Dupri and the Neptunes) recognized it.

I'm impressed. Just a year ago it looked as though Mariah was destined to be the next Whitney Houston. Remember her? Mariah's soul sister, with her ex-star husband and her drug problems? Thanks to the tabloids and 10 o'clock news, an entire generation knows Whitney as a supposed crack addict instead of the girl in the tank dress singing into the telephone "How will I know if he really loves me?" or the poised young woman who covered millions with goose bumps when she covered Dolly Parton's "I Will Always Love You" for her movie "The Bodyguard," which seemed destined to make her a major movie star. Although she's got an active contract with Arista and put out a full-length record in the late '90s -- one that garnered modest critical and commercial success -- it seems unlikely that she'll ever reclaim her former glory. Should she even try? The public is unforgiving; to most of us, Whitney Houston seems like a lost cause.

Mariah, on the other hand, appears to have been found, yet again. Scoff as you like at the title of her new record, but Mimi has indeed been emancipated. And I, for one, am delighted.