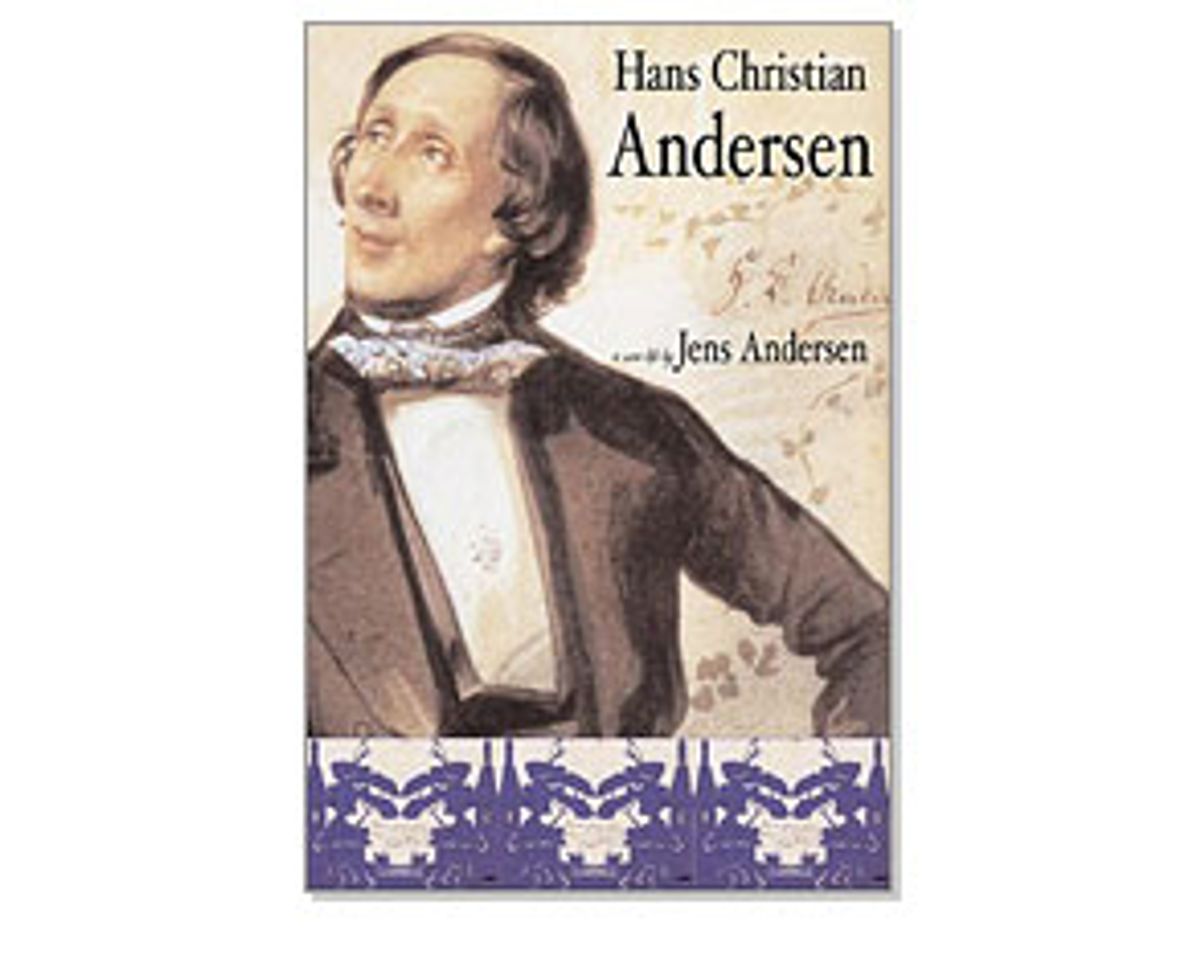 Has any great writer waited as long as Hans Christian Andersen has to be taken seriously? His fame is universal, and his contributions to Western culture can be seen all around us on an almost daily basis (though it's doubtful that many who refer to an "ugly duckling" or "the emperor's new clothes" are aware of their debt to Andersen's work). On May 6, Martin Scorsese introduced a Lincoln Center screening of Michael Powell's classic "The Red Shoes," based on Andersen's story. There isn't a legitimate bookstore in the Western world that doesn't carry his work in some form. And yet, discussion of Andersen's place in world literature has, for nearly a century and a half, been mostly relegated to the children's table.

Now, 200 years after his birth, Andersen, with his strange, sad life and the work he is best known for -- his magnificent fairy tales -- is finally allowed to sit with the grown-ups. Danish critic Jens Andersen (no relation to HCA) has given us "Hans Christian Andersen: A New Life," which dwarfs all previous works on the subject. (Though for those with less time on their hands, Elias Bredsdorff's 1975 "Hans Christian Andersen: The Story of His Life and Work," at roughly half the length, will probably do.) Andersen's collected "Fairy Tales," edited and introduced by yet another Andersen biographer, Jackie Wullschlager, brings his stories to life in a way that has only been hinted at in previous translations. Tiina Nunnally has rendered both Jens Andersen's biography and the fairy tales into splendidly readable English.

Andersen achieved his childhood dream of becoming a world-famous author at an early age, yet he was apparently regarded with either condescension or indifference by the Danish literary establishment -- not a single name of which is known to modern readers except in biographies of Andersen -- while being misunderstood and largely misinterpreted and, especially, mistranslated outside his own country. Andersen, the man and the artist, has been so relentlessly bowdlerized over the decades that a straight shot of the real thing hits the first-time reader with a shock. Those who associate the name Hans Christian Andersen with the saccharine 1952 film version of the Frank Loesser musical starring Danny Kaye may not be ready for the unexpurgated truth in such large doses, as in fact audiences were not prepared for the 2000 production derived from the earlier play, but with a darker script by the Irish playwright Sebastian Barry.

Don't blame Danny Kaye. A century before schoolchildren were singing "Wonderful, Wonderful Copenhagen" Andersen had publicly sanitized his own personal history in several biographies, the accuracy of which can be properly gauged by the English title of one of the volumes, "The Fairy Tale of My Life." Omitted from Andersen's own account were the facts that his grandfather died insane, his grandmother was sent to prison for bearing too many illegitimate children, and an aunt kept a brothel. His mother was a nearly illiterate alcoholic laundry woman. His father, a cobbler, was the closest the family would come to producing an average citizen, but he died when Hans was 11.

Homely, sexually insecure and painfully melancholic, young Hans was an unlikely candidate for literary greatness. He seems, in retrospect, to have almost willed himself into existence without much assistance except, in a few key instances, from strangers. At age 14, traveling alone to Copenhagen with no introductions and little money, he began seeking out prominent citizens and assaulting them with his poetry. His combination of determination and desperation touched some of them (including H.C. Xrsted, the discoverer of electromagnetism), and Hans eventually got himself an education at a grammar school where he was five years older than most of the other students. The experience traumatized him, but then, it's hard to imagine, given his circumstances, what experience in his teenage years would not have. Hans got just enough education to light his imaginative fire, and at age 21 his poem "The Dying Child," an absurd hybrid of sentimentality and self-pity, made him a literary sensation, though by no means a critically acclaimed one.

Some of the early contempt that many Danish critics expressed for his work may have been justified; in 1838, when Hans was 33, he was raked over the coals by a then-unknown journalist eight years his junior named Soren Kierkegaard, whose evaluation of Andersen's oeuvre reduced Hans to fear and trembling. Kierkegaard's dismissal of Andersen appears correct if we are to trust the opinions of nearly all of those who have read his novels and plays, but his judgment of the fairy tales misses the target by so wide a mark as to call Kierkegaard's own motives into question. Kierkegaard, says Jens Andersen, "thought that fairy tales have a psychological, cleansing effect. And at a certain stage of development, children need the horror and tension of fairy tales to work through and release their fear." Kierkegaard "anticipated the whole school within modern child psychology, for which Bruno Bettelheim, among others, became the spokesman many years later. This school maintains that the fairy tale not only educates and supports, but it also contains the redemptive words that can liberate children's emotions." HCA's fairy tales, Kierkegaard thought, were too naive and sentimental, just "listless stories about 'innocent and happy childhood'."

This is so wrongheaded that if Kierkegaard wasn't Danish himself one would suspect he had read HCA in one of the sickly English translations that have plagued Andersen's reputation for so long (such as that of Mary Howitt, a 19th century Englishwoman, who never read Andersen in Danish but rewrote his work into English from a German translation). There is little about Hans' work that is didactic, and there is also little of the raw violence that often makes the Grimm fairy tales seem more like horror stories. But there is an emotional and artistic power in most of the stories that lingers after the memory of other writers' fairy tales has faded. It's difficult to say exactly what emotions we feel as the little match girl, abandoned on the street, freezes to death dreaming of her grandmother, but the last thoughts we're likely to have are of an "innocent and happy childhood."

Our reaction to "The Little Mermaid" has been blunted by numerous versions, including the 1989 Disney cartoon that, in the words of Pauline Kael, featured "a teen-tootsie in a flirty seashell bra," but to reread the original, particularly in Nunnally's translation, is a revelation. A little mermaid falls in love and rescues a young sailor from drowning; she gives up her beautiful singing voice and fishtail to be transformed into a human girl so she can win his love. But the young sailor is in love with the exotic vision of the mermaid he once saw, which the new human girl only dimly reminds him of.

The man who wrote that story wasn't writing it to reassure children -- the aim of most fairy tales -- but to reveal a terrifying truth about male psychology. Adults who have not read Andersen in their youth might wonder if children can truly grasp stories like "The Snow Queen," in which a boy whose eye and heart are pierced by fragments of a mirror is taken to the palace of a snow queen from which he must be rescued by his playmate. A child, if he could articulate his feelings, might reply to the adult that he at least understands that the story, on its simplest level, says that love triumphs over cold reason.

Perhaps it is because Hans Christian Andersen the man lent himself to such easy caricature that it took decades for critics to acknowledge the combination of intensity and subtlety in his stories. In the case of HCA, as with that of Dickens, the reading public was well ahead of the literary establishment. He did not begin writing the fairy tales until he was 30, and within two decades they made him one of the most famous authors in the world, winning him passionate praise from at least a few discerning writers, such as Strindberg, who thought that "It was Orpheus that he called to mind -- this poet who sang in prose." The fairy tales also earned him the admiration and friendship of other famous writers, though in many cases the good will did not last. The German poet Heinrich Hiene became disgusted by Hans' deference to the upper classes; Andersen's manner, he thought, "reveals the sort of fawning servility that princes like." Andersen made much of his friendship with Charles Dickens, but that relationship did not last either. After Hans visited him in England, Dickens became exasperated at his neurotic moodiness and prickly sensitivity and stopped answering his letters.

His most successful relationships were with people he never met -- Henry Wadsworth Longfellow, for instance, and numerous children, many of whom sent him money when rumors floated that he could not afford to pay his medical bills (he could, actually, but often neglected to). The man whose writing struck such a deep chord in children and adults of both sexes lived mostly in lonely rented rooms. Despite relentless probing from Jens Andersen, HCA's sexuality remains pretty much a mystery. Jenny Lind, the Swedish Nightingale who was reputed to be the most beautiful woman in Europe, is thought to have been the unrequited love of his life, yet he also developed mad passions for men. There is no evidence that any of his loves were ever consummated.

Usually, the most boring part of a literary biography is the linking of biographical details to a writer's work, but in HCA's case, the associations are essential. Nearly every one of Andersen's great fairy tales was an obvious metaphor for personal experience -- he was, or wanted to be, that steadfast tin soldier who would remain loyal even when fire had reduced him to a little tin lump; he was the little match girl who died with the vision of an angelic grandmother. He was the ugly duckling. He was the nightingale itself, the spirit of the natural that triumphs over the artificial. He was the little mermaid and perhaps the young sailor as well. The 20th century Danish critic Hans Brix astutely observed that Andersen "wrote more self-portraits than Rembrandt ever painted." Brix might have added that he was far more honest about his life in his fiction than in his autobiographical writings.

Though he did not invent the fairy tale -- it's more accurate to view Hans as culminating a fairy tale revival that began around 1820 with the Brothers Grimm and with Charles Perrault's Mother Goose stories -- he did, as Jens Andersen writes, take a traditional form and recast it "in an utterly new and radically different way." He "managed to fill the old and often stereotyped stories with all manner of lively little details. By injecting his characters with a life that was deeper and much more individual than in the classic, one-dimensional folk tales, Andersen was able to make all his readers experience and share the timeless sorrows and joys of his fairy-tale figures." In fact, as he matured as an artist, many of Andersen's greatest stories, such as "The Steadfast Tin Soldier," had no early roots but sprung entirely from his imagination. They seemed like folk tales.

W.H. Auden felt "The Snow Queen," at once both simple and complex, illustrated the difference between folk tale and literature, a point that holds for nearly all of Andersen's great stories. In truth, neither fairy tale nor folk tale truly encompasses the genius of Hans Christian Andersen, the first one limiting his audience to children while the second suggests a primary appeal to scholars. He remains, in all of Western literature, the writer with the power to reach the adult in the child and the child in every adult.