J.Lo and Jane Fonda struggle through this dull little comedy from the man who brought you "Legally Blonde." 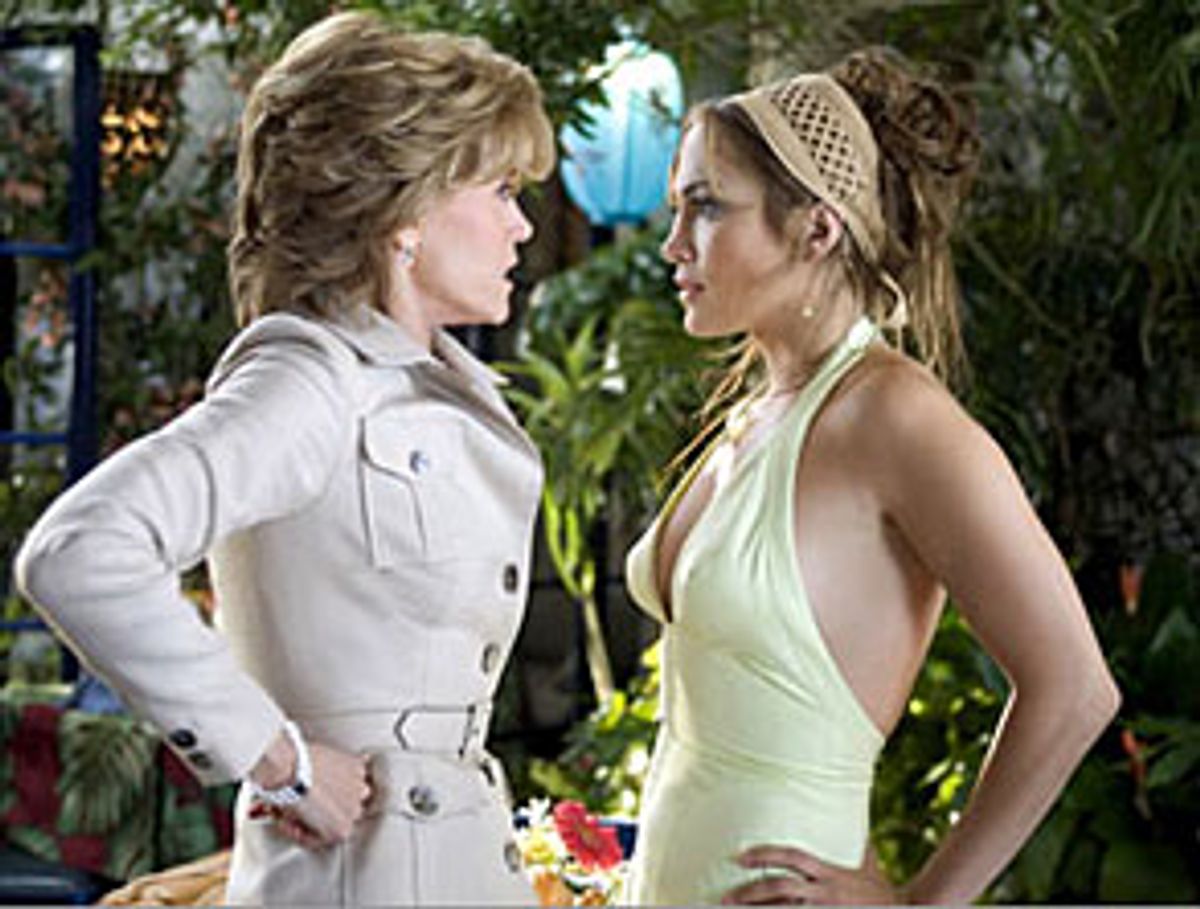 There's nothing in 95 minutes of Robert Luketic's "Monster-in-Law" that Ernie K-Doe didn't say better in three: "If she'd leave us alone/ we would have a happy home," he sang in his 1961 hit "Mother-in-Law." If only "Monster-in-Law" were that compact.

Jane Fonda is the self-centered, meddlesome mom, who's hoping to keep her son (Michael Vartan) all to herself; Jennifer Lopez is the good girl with the sunny disposition who dares to enter the inner circle. The gags here are stultifyingly simple, and they pile up, one by one, into a groaning heap. "Monster-in-Law" is a mild, dull little picture that feels as if it was assembled from a kit: It's probably no worse than any number of other random moneymaker comedies churned out by Hollywood in the course of a year (it's certainly no worse than, say, the numbingly stupid "Meet the Fockers"), but its cheerful mediocrity is offensive by itself.

The story takes ages to get going because when Lopez first meets Vartan, she -- get this -- thinks he's gay. Once that barrel-of-laughs misunderstanding has been cleared up, Vartan brings Lopez home to visit Fonda the matriarch, a longtime TV-talk-show personality who's just been canned, which means she has more time to afflict her abrasive personality on anyone who's unlucky enough to be around her, chiefly her take-no-prisoners personal assistant (played by the always-wonderful Wanda Sykes, whose presence is one of the few true pleasures this picture has to offer). Fonda greets Lopez in a twirly skirt, a Southern-belle picture hat, and enough silver-and-turquoise jewelry to buy and sell New Mexico 20 times over -- the get-up may be a joke, but we can't be sure.

Much later, Fonda intentionally puts ground nuts in the gravy at the prenuptial rehearsal dinner, knowing Lopez is allergic to them -- the young woman's mouth swells into an alarming peach-shaped monstrosity. With visual howlers like that, why bother writing actual dialogue for your actors? Maybe that's how you get lines like "Life's too short to live the same day twice," which Lopez recites perkily and almost believably.

But what actress should have to? Luketic struck gold, or at least just amber, with his first picture, the jumbled but mindlessly enjoyable "Legally Blonde"; his next picture was the far less flashy "Win a Date With Tad Hamilton!" which I disliked the first time I saw it, although a second viewing made me better appreciate its quiet charms. "Legally Blonde" was, of course, a big hit, while "Tad Hamilton" was not. So it stands to reason that "Monster-in-Law" more closely resembles the earlier picture: It has a buoyant, artificially cheerful, marshmallowy feel and look to it. (The cinematography is by Russell Carpenter.) It also feels less like a movie than a line of goods -- it's the sort of picture that spends a lot of time selling you on how funny it is, instead of actually being funny. And it would probably drift into and out of multiplexes without much notice, if it didn't feature Fonda's first film role in 15 years.

Fonda is a wonderful comic actress, and not even this vehicle can completely sink her. But the role is thankless: It shows off Fonda's professionalism, but her wicked spark feels more manufactured than truly felt. There's a modest amount of chemistry between her and Lopez, but she really comes alive with Sykes: Sykes gets all the best lines in the movie ("You were taking me for a spin in the crazymobile!") -- or maybe it only seems that way. I've loved Sykes in every movie role I've seen her in: She has a knack for channeling everyday outrage into superbly funny bits. Fonda and Sykes are made for each other, and their incessant bickering and arguing are about the only things that give "Monster-in-Law" any life. (Watch for the moment when Fonda pleads with Sykes, "Let's go someplace near the ocean and drink lunch!")

The only other reason to even attempt to watch "Monster-in-Law" is Jennifer Lopez. When critics write about Lopez as an actress, they often note that most of her movies have bombed, as if this were somehow purely her fault. But what strikes me about Lopez is how much I enjoy watching her even in otherwise completely dismal movies (like "Maid in Manhattan"). Lopez is a comfortable kind of right even when everything around her is wrong. Her line delivery always has an easy, offhanded gracefulness. With her honey-toned skin and ready smile, she has the kind of beauty that momentarily fools you into thinking it's ordinary. And even though I'm not a sucker for the "bride dressed in virginal white" thing, the sight of Lopez in a simple fitted wedding dress in "Monster-in-Law" did make me gasp. I'm consistently amazed at Hollywood's inability to build a good comedy around Lopez, and "Monster-in-Law," in particular, doesn't do her any favors. Maybe someday, some director will know what to do with the dangerous curve of that smile.