Jet Li shows he can both kick ass and act in this redemptive tale about a trained murderer with a heart of gold. 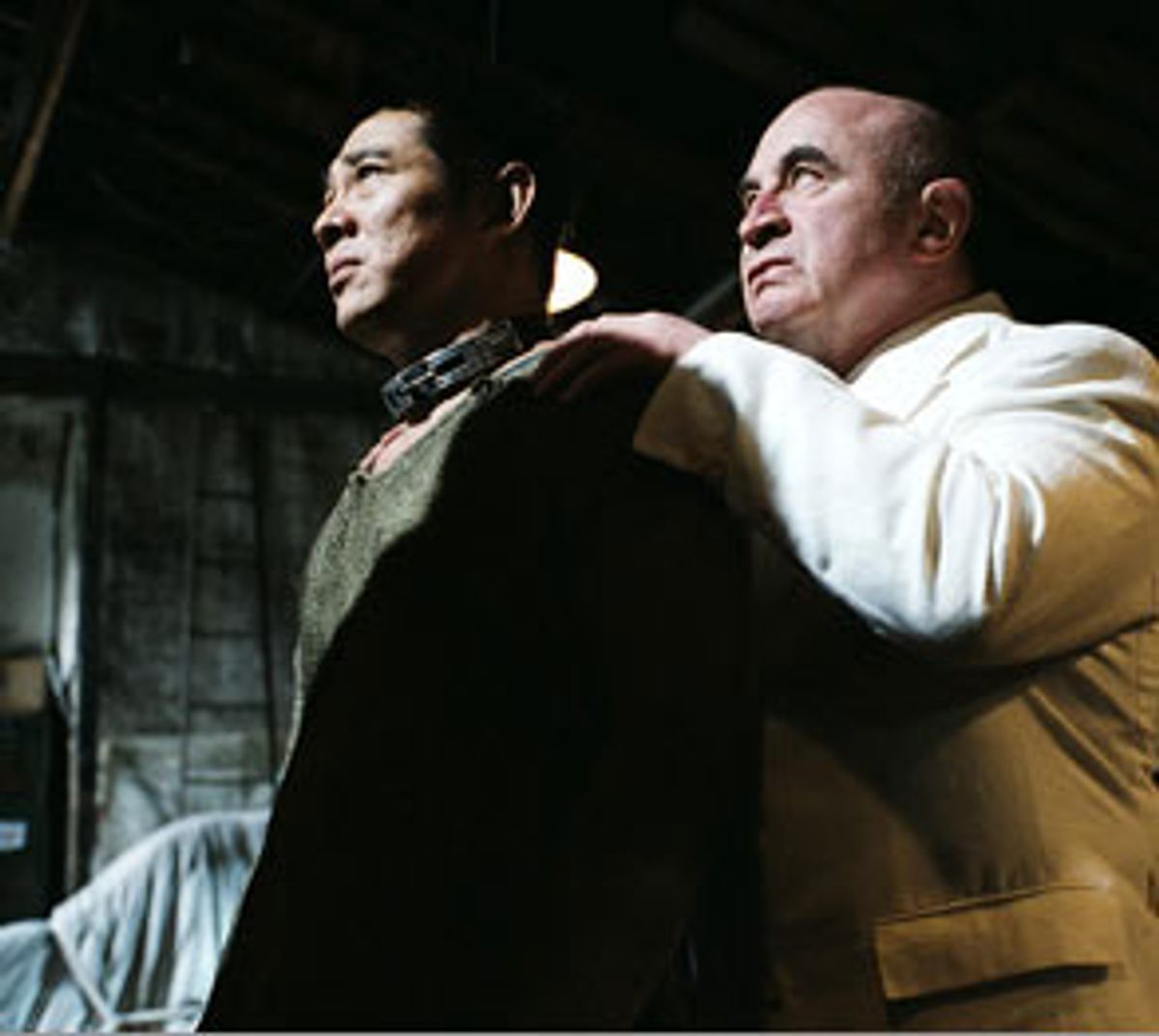 "Unleashed" is a nice, violent little film about the redemptive powers of art and love. It's really two intersecting pictures, an action movie and a fable about the strength of family bonds, that merge to make a wholly satisfying Venn diagram, one that exploits our emotions shamelessly but with blunt honesty.

Jet Li plays Danny, a vicious fighter who has been raised from childhood by his cruel "Uncle Bart" (Bob Hoskins who, as always, brings dots and dashes of humanity to this kind of role). Bart treats Danny like a dog, quite literally, circling his neck with a tight metal collar and locking him in a dank basement pen, dressing him in rags, and giving him only scraps to eat. Bart has trained Danny, Pavlov-style, to kill whenever his collar is removed.

But Danny, bloodthirsty as he is when that collar comes off, has a tender soul: At night, he looks at an alphabet picture book that he keeps with him in his cage, lingering wistfully over the page that shows an "L" for "love," accompanied by an illustration of a mother cradling her child. It's the sort of overmanipulation that usually makes you want to cry "Foul!" But director Louis Leterrier trusts Li to carry the moment, and he does, inventing a wholly new type of character: He's the first Dickensian orphan action star.

Like all Dickensian orphans, Li's Danny is going to have an adventure, and it begins when he wakes up in flannel cowboy pajamas (his own raggedy clothes are folded up neatly on a nearby chair) in the home of a kind, wise, blind piano tuner named Sam (Morgan Freeman, giving the kind of warm, easygoing performance he does so well). We learn that we're in Glasgow -- previously, when Danny was living his old life, we didn't know quite where we were, other than in some greenish-gray twilight nightmare. But once Danny begins his new life, the picture literally changes color: Cinematographer Pierre Morel turns the movie into a cozy Kansas of burnished golds and browns, the warm colors of home. And Danny finally is home: Sam and his teenage daughter, Victoria (the sprightly Kerry Condon), draw him into their little family, teaching him how to use eating utensils, introducing him to the pleasures of ice cream and, most significantly, teaching him the rudiments of piano, an instrument whose sound he's mysteriously drawn to.

"Unleashed" was written and produced by Luc Besson, and its plot shows certain Besson trademarks: Like "Léon" (shown in the United States in a cut version as "The Professional)," and even, to an extent, "La Femme Nikita," its vicious brutality is really just an excuse for Besson to explore what he's truly interested in: the idea of misfits falling in together to form makeshift family units.

"Unleashed" follows a template -- from scene to scene, you can pretty much guess where the plot is going to go -- but that doesn't matter. Besson and Leterrier (who co-directed, with Corey Yuen, "The Transporter" from 2002) know they're not giving us a daring novelty. But they're passionate about drawing us into their melodramatic vision. They know that stereotypes -- the wise, blind African-American, for example -- have power over us, and they wield it accordingly. They're essentially showmen, and the experience of watching "Unleashed," if you give yourself over to it, is a kind of call-and-response. Leterrier and Besson are riffing on old Hollywood tropes, tugging at our heartstrings in a kind of code; they're playing us, but not disrespectfully -- we're their ultimate instrument, not their bingo card.

"Unleashed" is partly an action movie, which means Li kicks plenty of ass: Skulls get bashed in and limbs get cracked, and then there's the occasional spurting bloody wound. The movie's action sequences are shot with an arty gloss, as if to signal to the audience that this is "legitimate" violence and not the cheapo kind: A little of that goes a long way. But the sequences themselves are beautifully choreographed (by Yuen Wo Ping, one of the greatest living martial arts choreographers), particularly one in which Danny, having decided he no longer wants to be a killer, dodges his opponent instead of striking him: Li is always astonishing to watch, but because there's so little contact between him and his opponent in this sequence (in other words, there's no bone-crunching impact), his tigerlike elegance is even more apparent. With his flying twirls and rolling tumbles, here the language of defense, not offense, he seems to move without even displacing any air.

Li makes a wonderful action hero, but I suspect it's not just his grace as an athlete (and therefore as a dancer) that has won him so many fans worldwide. Li, as he certainly showed in "Hero," is a marvelously perceptive actor: His face shows fine-grained shadows of emotion that, I think, are part of his physicality, not something detached from it. In that way, Li is like a silent-movie star: His face has a vocabulary that trumps the use of words. When he realizes that Victoria and Sam intend to be kind to him and not to mistreat him, the daybreak of wonder that passes across his face is both instantly readable and touchingly subtle. Pathos isn't a cheap gimmick when it comes from the soul, and Li knows how to channel it, through his brain, his limbs and his heart. If Lillian Gish still keeps tabs on her craft, she must be looking down at him, and smiling.