Each May, weather freaks from all over the world descend on the Midwest with hopes of seeing the perfect twister. I'm one of them. 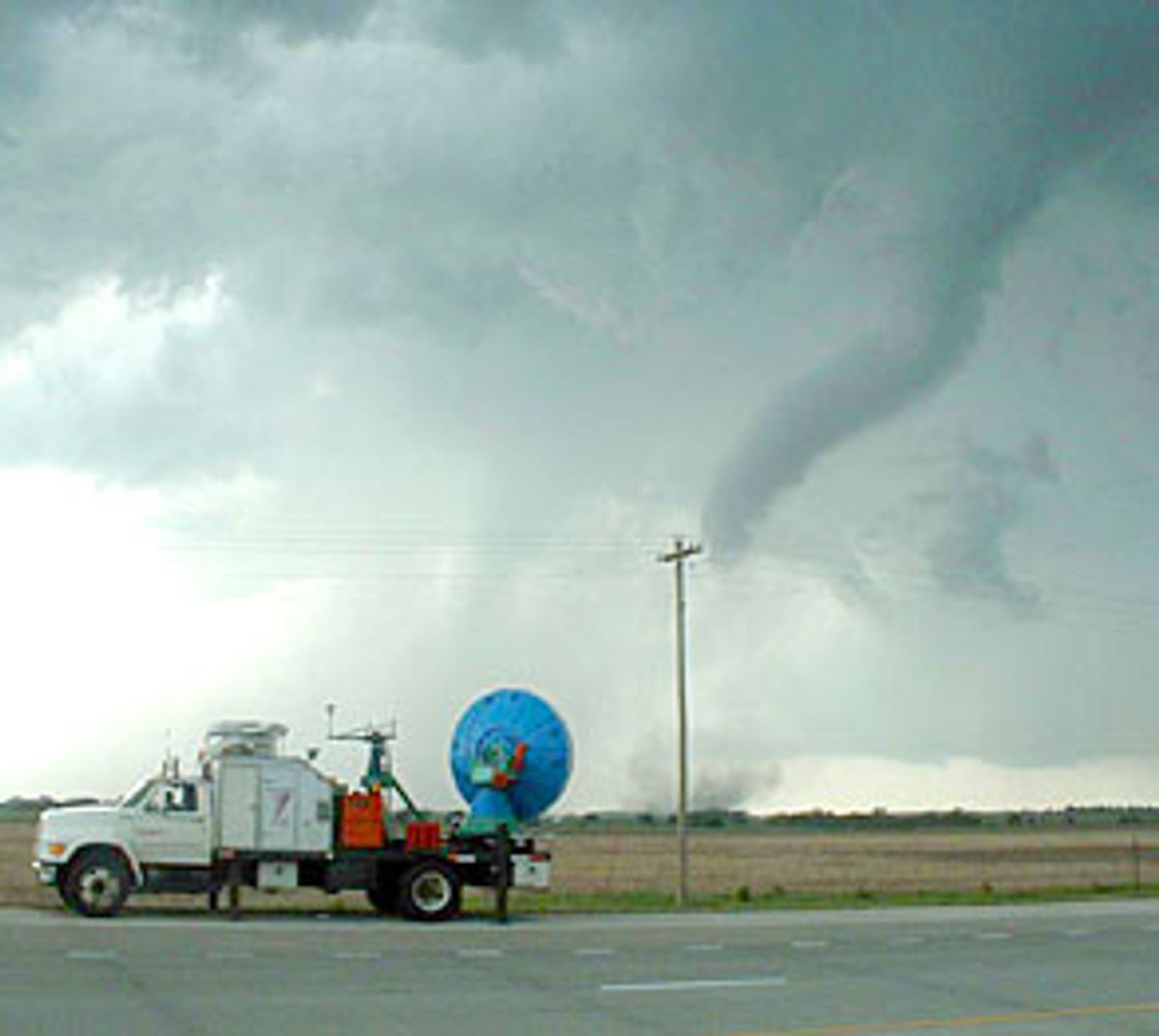 May is the month to chase tornadoes. You station yourself in the bull's-eye of central Oklahoma, as the seasonal low-pressure troughs sashay from the Rockies into the high plains. Sometimes you have to wait; this year and last, not a leaf stirred during the first weeks of May. For those who have traveled to track big weather, as they do each year in greater numbers -- from Europe, from England, and from as far as South Africa -- waiting through this dreadful, disastrously becalmed period of weather clemency can be torture. But there's likely a payoff. May 2004 ultimately broke all records for tornadoes since records have been kept, with Kansas usurping Texas for the most in a season -- 124 -- and for most tornadoes in a single month, 66 in all. There were nearly 600 more tornadoes across the country than the 20-year average.

Last year, all of this sent me and veteran chasing guide Matt Biddle traveling over 6,000 miles on a month-long storm-chasing campaign that took us through Kansas, parts of Iowa, and into Nebraska, to within 20 miles of the town of Yankton, S.D. Now, on the occasion of the publication of my book "Big Weather: Chasing Tornadoes in the Heart of America," I'm heading off to revisit this strange subcultural realm, this small, incredibly touchy crowd of storm chasers, severe local storm scientists, tornado tourists, and the mixed-nuts variety of adventurers. Over the next two weeks, I'll track storms, the people who chase them, and hazard a few observations about our wider-ranging cultural fascination with catastrophic weather.

This May is certainly threatening -- or promising, depending upon your point of view -- to flex its muscles. "Tomorrow looks like a tornado outbreak in southwestern Nebraska," Matt wrote in an e-mail to me this past Tuesday. The week previous, there'd been a slow but steady improvement in the severe weather outlook. "Winds at all levels look classic," Matt continued, before slipping into what still remained for me a more-or-less opaque meteorologia: "There's an east-west oriented baroclinic zone, late afternoon cyclogenesis." It was like listening to my wife shift from English to Italian while talking to her sisters. One sensed, albeit dimly, that trouble was afoot, and that it somehow involved you. Then, on Thursday afternoon, a monstrous, rain-wrapped tornado struck just north of South Plains, Texas, north of Lubbock. Several storm chasers, including Charles Edwards of Cloud Nine Tours, successfully intercepted it, and then got clobbered with baseball- to softball-size hail that busted out the windshields of his van and Suburban and strafed the sides of the vehicles with estimated windspeeds of 120 mph.

Chasers are, as they used to say of a certain type of social misfit, a bit touched -- liable to vanish suddenly, to wander out of doors for days, then return just as suddenly, their pickup trucks pocked by hailstones, wheel wells caked with mud, their clothes in tatters, hair in disarray, eyes like saucers and wearing a crazy, beatific smile. The mighty big finger of God had descended upon their minds, it seems, leaving them standing by roadsides, or in convenience store parking lots, quasi-autistic in T-shirts that said things like "Project Vortex" or "Storm Trackers" or "Moderate Risk."

My journey this month allows me to reconnect with several of them. I'm looking forward to seeing Ward Davenny, a professor and landscape painter from Carlisle, Penn., who had a near-death experience near Attica, Kan., when a tornado took an aberrant path and he wound up zigging and zagging in front of it like a squirrel in front of an oncoming semi -- all the while capturing the event on video. I expect to chase with the Twister Sisters -- Peggy Willenburg and Melanie Metz-Trockman -- who are not actual sisters but meteorology student-entrepreneurs from the aptly named St. Cloud University. The Twister Sisters have become a kind of severe weather media phenomenon -- they are funny, attractive, smart, and they have serious meteorological chops. And they are heroes, having called off a chase on May 22 last year to help rescue a group of teenagers from a house that got flattened by the widest tornado in history, the deadly, devastating tornado that swept through Hallam and Wilber, Neb., and left a 52-mile path of destruction. Then there are the severe local storm researchers -- the scientists -- among them Joshua Wurman, of the Center for Severe Weather Research, based in Boulder, Colo. And Sean Casey, now part of Wurman's scientific crew, in his regionally famous Tornado Intercept Vehicle, or TIV, a Ford F450 truck chassis surrounded with a quarter-inch of armor plating, with a turret on top that housed an IMAX camera.

On a big weather day, all of them -- the media people, the scientists, the recreational storm chasers, the teenagers skipping school, the emergency management officials, the storm spotters -- will arrive in flocks, blending together like a roadside exhibition of disposable income lingering for a bald, unguarded moment on the prairie. Some have spent tens of thousands of dollars per chase car, plus hundreds of dollars per season in fuel, motel rooms and cases of Diet Coke and bad coffee and Cracker Jacks and trucker food -- not to mention hours upon hours of country western songs. They descend en masse upon some little bit of nowhere, some small patch in the middle of the North American prairie -- near Salina, Seling or Slapout -- to gather by the hundreds, sometimes blocking traffic for a country mile, causing cattle to lift their heads in puzzlement, to stop, set up their tripods, while the wind blows in great gusts, and the storms do the fearful things that storms do. Soon, wherever they come from, and for whatever reason -- for the mere thrill of it, or in the name of science -- they find themselves hopping up and down and hollering at the sky.

So what are they after? Storm chasing admits a complex of motives. Every tornado represents a supreme, if momentary, trouncing of the second law of thermodynamics, the glum law of entropy that states that all things move from order to chaos. Tornadoes move the other way, from a chaos of cloud swirl to a near-perfect level of order and organization, capable, paradoxically, of delivering immense destruction and chaos. Chasers come because every tornado is a perfect storm, a wonder occurring oftener than once every hundred years. More than a thousand such perfect storms strike North America every year, and because of this frequency of occurrence, itself a miracle, a fluke of geography and topography, chasers come for the chance of actually seeing a tornado with their own eyes, to look and to stare in wonder.

Chasers come for the same reasons people choose to encounter other natural wonders -- to experience the dislocating sense of the sublime, to feel small in comparison with something large and powerful, to plunge oneself into an experience that is so outsize as to bring the rest of life's contours, momentarily, into relief -- the way soldiers talk of combat, the moments after battle; how things shimmer, a cup of tea, the leaves in the trees suddenly sparkling with a presence rarely felt in ordinary life. But unlike other natural wonders, like Niagara Falls or the Half Dome of Yosemite, a tornado can -- and does -- occur anywhere. In this regard it is something like the whale in "Moby-Dick," a holy terror of complete and unfixed address liable to rear its head at any point upon the wide ocean of the world. A tornado is like the whale, but more terrifying. There are no eyes that see, no mouth or ears to hear, no head or limbs to suggest a kinship, however distant, to human anatomy. A tornado, rather, is all geometry, and more potent for its unlikeness.

And a tornado is really a whole lot of nothing bearing down upon your home. The substantial facts of wind in a tornado, for instance -- velocity, direction, vorticity -- are most often measured indirectly, in the wreckage left behind. However, the thing itself, the tornado that comes into your neighborhood and rips your house apart, contains an emptiness that is profoundly insubstantial; driven and fueled by the parent storm above, the windswirl of the tornado can create a pressure drop over an extremely steep gradient. Tim Samaras, an engineer out of Denver who has designed a special device called an HITPR, or Hardened In-Situ Tornado Pressure Recorder, a tornado probe with no movable parts, has measured and recorded the pressures within tornadoes, most famously for National Geographic, successfully deploying several hardened probes in front of tornadoes (and then fleeing, à la "Twister"). Air, we often forget, has weight and density. The weight of the atmosphere, all 15 miles of it, presses down upon you at all points at about 1,013 millibars at sea level. Hurricanes can create pressure drops of up to 33 millibars in one hour, but Samaras has measured pressure gradients inside tornadoes of 100 millibars -- a precipitous drop, in a matter of seconds, an absence, an emptiness created by wind vectors swirling within a tornado, that could rocket you upward through a shaft as if you were shot out of a canon.

And so they come, perhaps -- scientists and amateur chasers alike -- for the wonder of it, for a bit of self-induced awe. Some, like the Twister Sisters, have discovered hidden markets; they run a Web site devoted to chasing and conduct tornado tours throughout the region in search of an encounter with big weather. For those less disposed to direct encounter, the local and national media send their intrepid reporters into the storm, harvesting schadenfreude. For others, big weather becomes an occasion for volunteerism and community service. Acting as a sort of home guard, storm spotters place themselves in harm's way, radioing reports of tornadoes, or pea-size hail, or torrential rain to their local emergency management offices. Big weather provides a baseline sense of "reality," of perspective, of "weather citizenship," a chance to empathize at a distance with imperiled communities, but surviving. Towns destroyed bring people together and make them aware of the things that really mattered in life. For others big weather is dramatic enactment of God's larger plan, out of Revelations, to destroy the world in order to save it.

For me, this trip is a chance to reacquaint myself with the annual migration of chasers, and with the people who have made this part of the world their home, tornadoes raking the land each spring, destroying crops, livestock and houses in a kind of reverse lottery. I have been to many places in the world, but there is nothing I have seen of the world's splendors that is more beautiful than the sky in Oklahoma, Kansas or Nebraska. And one looks a little differently at this sky, even on a tranquil morning, the world flooded with light. Because, to paraphrase a Swedish proverb, the afternoon will come. And the afternoon knows what the morning never suspected.