Phallic missiles, flaming Veronicas and fighting models! I love my favorite shows so much, I only have eyes for them -- except when I don't. 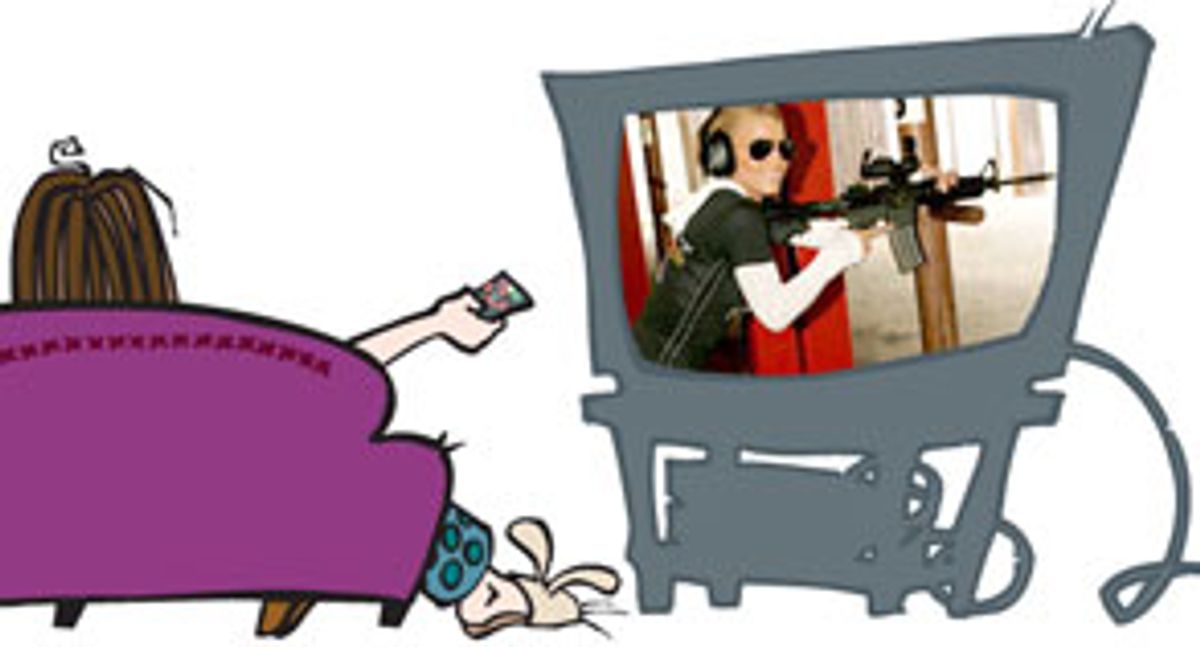 I'll tell you how good it was. It blew my mediocre mind. It cleared out my sinuses. It answered all looming questions, not just about "Veronica Mars," but about life in general. It made me laugh, cry, cringe, scream and cry some more. It deepened my already deep suspicions surrounding snotty popular kids and drunk mommies and hot-tempered former action stars. It charmed my pants off.

When the credits rolled, there I was, weeping openly, with no pants on. My dog was embarrassed for me.

I felt no shame. The "Veronica Mars" finale was everything a finale that involves a season-long mystery should be: alarming, sexy, scary, touching, disturbing, delicious, intensely sad, reassuring and, most of all, incredibly satisfying. Oh my! Its poignancy lingers. And look, I know Stephanie Zacharek already covered this very nicely in her review of the finale, but some things are so good, they deserve repeated, extended praise.

(OK, now we're going to talk specifics, so those of you who TiVo'd the last episode probably shouldn't read this. Yes, I'm being extra polite, because I really want all you stupid wankers who haven't seen it yet not to ruin it all for yourselves. In fact, I'm assuming the entire first season will be available soon enough on DVD, so do yourselves a favor and watch the whole thing, preferably saving the last four episodes to view in one glorious sitting. Those who plan to do so should skip straight to the heading Oh, look! Missile tow! and thereby avoid any spoilers here.)

First of all, I loved the heartbreaking return of Veronica's mommy for its moral and emotional ambiguity. Yes, we can see very clearly that Mommy is a hell of a lot of fun, and extremely charming to boot. Daddy enters the apartment, and Veronica and Mommy are making tacos. "Hurray!" Veronica's face says. "Mommy and Daddy and me, happy and laughing and about to eat some tacos!" The "O.C."-style witty banter ensues, during which Mommy regales Veronica and Daddy with her long-standing theory that you should listen to music that matches the food you're making or eating: Mariachi with tacos, Elvis with fried foods, and the rest is a blur, so charmed was I by Mommy's wit and verve.

Still, we care about Veronica, too, and if she wants her mommy back, that makes Wallace's mom about as appealing as a roomful of dogs dressed in delightful yet hideous little costumes. Like I said, ambiguity. And what sums up moral and emotional ambiguity better than a dog dressed like fat Elvis?

The only thing more perverted than a dog dressed like a hippie is a mommy pretending not to be an alky. But at least the test says Veronica's not her ex-boyfriend's father's love child after all, so not only is Daddy really her daddy, but Duncan, her delicious ex, isn't her brother either! That means they can take roofies and bump uglies all over again! Hurray!

So now Veronica's current mash partner, Logan, is looking pretty suspicious, right? And of course we could've guessed that he was all too obvious as the killer, but when it comes to mysteries, personally I really do prefer to be led around by my nose. Why try to figure it out, when you could suspend your disbelief instead? It's like Mr. Toad's Wild Ride at Disneyland: If you don't think you're about to get hit by an oncoming train, it's not nearly as fun when you land in Toad Hell.

And speaking of Toad Hell: Harry Hamlin! Screwing Lilly! That dirty girl makes slutting around look damn good -- except for the part where the carefree slut gets smashed in the head by her father's 30-pound ashtray. Who keeps a weapon that lethal around the house?

No matter. I loved that moment when Duncan (who thought, at the time, that he must've killed Lilly in some blacked-out state, because that's what his idiot parents thought) and Veronica watch the tape of Lilly and Aaron (Logan's dad, played by Harry Hamlin) fooling around, and they stop the tape just as Aaron's evil face is in the edge of the screen. It reminded me of that moment in "Election" where the screen freezes just as Reese Witherspoon has a grotesque look on her face, and then Ferris Bueller's friend says something about how juicy and delicious her ripe young fruits were to taste and pick and make pie with.

See, I'm normally not so polite, but I know all you wanklets can't be distracted by Reese's Witherspoons, so entranced are you by this fantastic finale. Who wouldn't be? Veronica, trapped! Harry Hamlin's face appears in the rearview mirror, just like in that scary wives' tale! Blood, fisticuffs, flames ... Daddy saves the day! Alky Mommy, kicked out! Wallace's Mommy, nurturing Daddy back to health! And who's at the door? Of course we're hoping it's Duncan but ... Deputy Leo? You never know! Those wily writers have us by our ripe young fruits.

Anyway, let's just skip the play-by-play so you can run out and get the DVD and relive it all at your own pace, while touching yourself gently and/or scarfing cheese doodles. In summary, though, let it be known throughout the land that not only is "Veronica Mars" the Best New Show This Season, by far, but this might just be the Best Finale Ever.

Oh, look! Missile tow!
OK, is everybody back now? Including those who plan to watch "Veronica Mars" on DVD? (God, you'd think they'd give me a cut, after that pitch. At least send me a T-shirt, guys. Baby doll. Medium. White or gray if possible.)

Anyway, welcome back, everybody! You're just in time to linger once again on this deliriously dread-inducing season of "24" (Mondays at 9 p.m. EDT on Fox). OK, but wait. First, some of you still have to see this. Nice, right? Glad you didn't miss that, aren't you? Who's your mommy?

Onward: Tony and Michelle are staring at each other again! With longing! And, oh yeah, the nuclear missile has been launched! But where is it pointed? Even Chloe doesn't know! The world's panties are in a bunch! Would those sneaky terrorists have had the foresight to point it at China, knowing that it takes a nation of billions to hold us back? Would those damn dirty terrorists know that, by attacking those silly little Chinese foreign peoples, they could do much more damage than it's possible to inflict with a few laptop computers? Who knows? After all, they didn't know that CTU had updated its security software, having recently purchased the Cisco Security Response System! Well, with Cisco, stock symbol CSCO, in place to defend this great nation against terrorists, what could go wrong? Note to the Cisco marketing team: That's not going to look like a very good product placement when screaming, bloody citizens fill the streets. If Iraq could be blamed for 9/11, Cisco could just as easily be blamed for the next terrorist attack.

Meanwhile, how horrifying was it to witness a panicked president who strikes a haunting resemblance to Nixon? That guy is about as natural and relaxed and comfortable under crisis as a dog dressed up as a hippie. You know, like this.

And what about that silly Chinese diplomat, with his frivolous concerns? He's so pesky! We're in the middle of a serious crisis here, and he wants to ask stupid questions! Someone should dress him like this. Yeah! That'll show him!

Dancing drama queen
And speaking of silly, "America's Next Top Model" slipped into the realm of slapstick this week, as Keenyah, who gets fatter each episode, has continued to eat like crazy and started picking fights with her only ally, Britney. You know, subtle, sweet Britney, who spent the previous week's episode drinking and barking out egocentric corkers at a dinner party, causing a roomful of eyes to roll? Like a scary cross between Yaya (Respeito!) and Kelle (Yikes!) of last season, Keenyah prattled on about how important and meaningful it is for her, personally, to be in Africa because she's black. Fine, except when asked about Naima, who's a light-skinned mulatto, Keenyah said, "I don't really think of Naima as black" -- disregarding the fact that Naima does.

After Keenyah whined, ate some more and complained that her jeans were too tight, the girls were forced to dance onstage in front of a live audience. Klutzy but lovable Kahlen was in tears immediately. "When things get too hard in my life, I give up," she confessed. Spoken like a true winner.

As if on cue, we cut to an Old Navy commercial set to "Our Lips Are Sealed" by the Go-Gos, featuring some of the worst choreography I've ever seen. Who fired the "Bust a Tunic" crew and replaced them with these clowns? I mean, my God, they ended with a collage of jazz hands on the beach that wouldn't even make the cut with the Up With People brigade.

Appropriately outraged, we returned to "ANTM" to find Kahlen onstage, dancing like a pro. Unfortunately, Naima is a dancer, so she won the challenge. Personally, I'm sick of sweetly superior Naima and her Carrot Top hairdo, but she is looking like the favorite, and at least she isn't a complete moron.

In contrast, Keenyah parades her ignorance for all to see and enjoy. During the pity-the-little-foreign-world-peoples segment of the show, she cried in Nelson Mandela's cell, then got on the bus and bragged about crying and went on and on about how touching and intense the whole thing was, even though she admitted earlier that she didn't know at the time whether Nelson Mandela was alive or not. Jazz hands, everyone!

Finally, Tyra's supernaturally glossy lips dismiss Britney, and we're left with three of the least interesting contestants in "ANTM" history. Could somebody slip these girls a roofie and fly them to Italy already?

Ah, but it's finale season, so our expectations are swelling. Will "Veronica Mars" hold onto the Best Finale Ever title, or will "The O.C." or "Desperate Housewives" or "Lost" sneak in and steal the title? Don't hold your breath, is all I can say. That, and take that grass skirt off your dog.

Next week: More of the greatest hits of the season, plus a barrage of finale recaps, including some by writers who won't address you as cocksuckers!