The dynamic duo of Fireman and Dolphin Boy play out a tear-jerking saga of friendship, disloyalty and redemption. 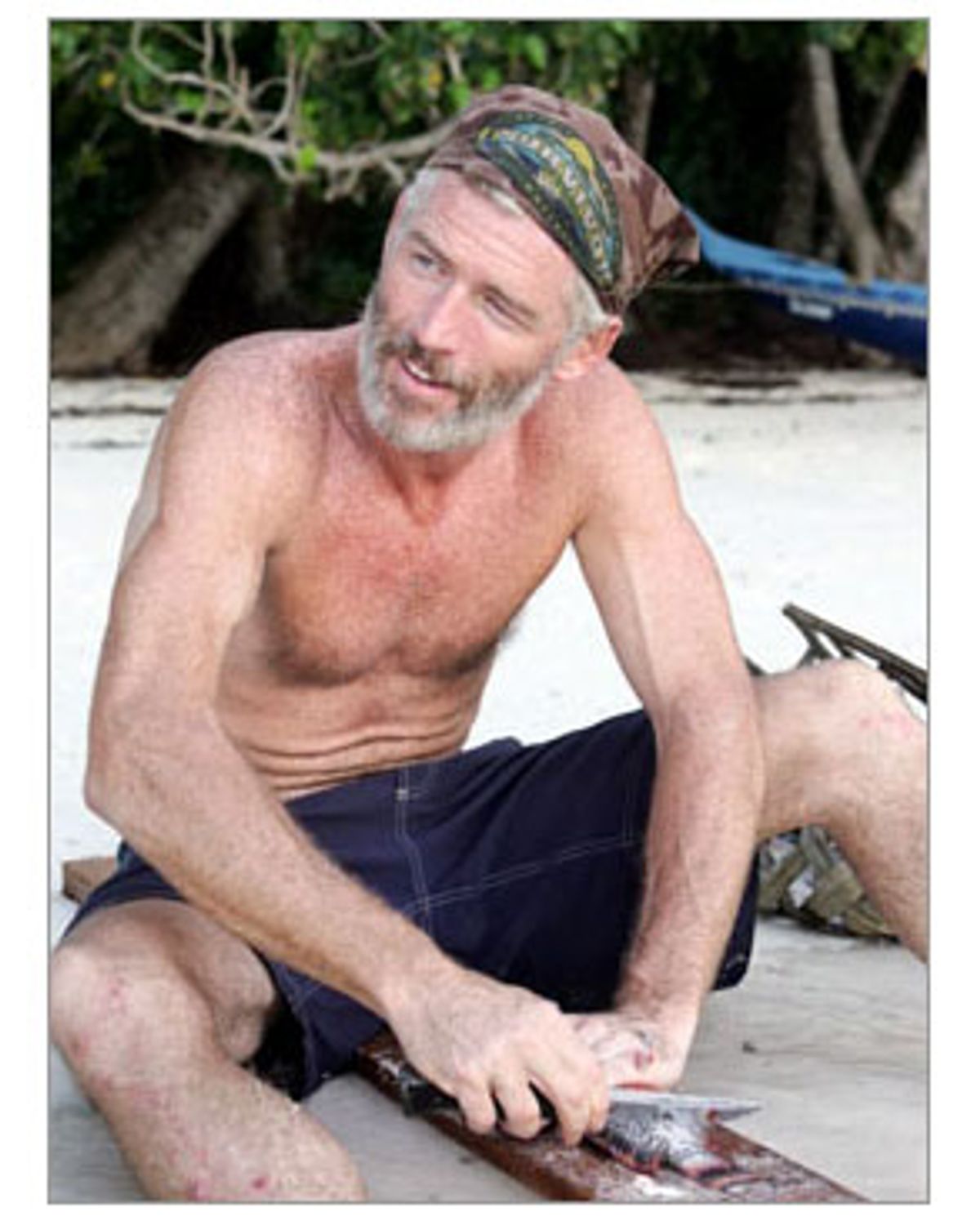 Guilt makes the world go 'round. Many of us knew this before we took in the surprising finale of "Survivor: Palau," but leave it to this unsinkable franchise to reacquaint us with some of the enduring themes that define the human condition.

The tenth season of "Survivor" proved itself unique from the start: One team, Koror, won every single immunity challenge, and then one man, Tom Westman, won five out of seven individual immunity challenges. Despite such dominance, Tom and the other more physically dominant players weren't voted out by the weaker ones early in the game, as they so often are, in a preemptive move to eliminate threats. Instead, two of the most capable and likable players, Tom (aka Fireman) and Ian (aka Dolphin Boy) made it to the final three.

Sadly for Dolphin Boy Ian, though, not only does Fireman Tom win the last few immunity challenges, making it impossible for the others to vote him out, but he begins showing his teeth to the others in order to keep them in line. When Katie threatens to join a female alliance, not only does Tom's secret informer, Caryn, tip him off, but Tom eventually brings the hammer down in his typical lawful fashion, confronting her with the fact that if she flips, whoever remains in the iron-strong duo of Fireman and Dolphin Boy will make sure that she'll be the next to be voted out.

This direct threat doesn't please Katie, who was sure she had Dolphin Boy under her thumb after hurling unfair accusations and tearful recriminations at him during the previous episode in one of the most gloriously blatant uses of guilt and feminine wiles ever to be seen on television. (Ian himself referred to it as being just like "girl trouble" at home.) And the onslaught was effective: Ian weepily pledged to never betray his friendship to Katie again.

In the first moments of the finale, we find Ian plotting with Katie and Jen to take down Fireman Tom once and for all. Unfortunately for them, Tom wins immunity, but openly announces that instead of eliminating Ian, who's his only threat, he's going to stick by his alliance and vote off Jen instead. Dolphin Boy gushes with gratefulness, telling his bestest buddy that he admires him and can relate to his struggle, because it would be "a hard decision" for him, too.

Fireman is aghast! This was an easy decision, based on honor and decency! Suddenly, Dolphin Boy's loyalty is in question! Fireman confides in Jen, who then - naturally - tells him that Dolphin Boy had planned to vote him off if he didn't win immunity.

Et tu, Brutus! Tom and Jen vote to eliminate Ian, Ian and Katie vote to eliminate Jen, but Ian wins a tie-breaker challenge, sending Jen home. The wrath of Fireman begins immediately after Tribal Council. Ian is circumspect but -- foolishly -- won't admit that he was intent on seeing Tom go down. Ever the opportunist, Katie demonstrates the correct way of heaping guilt on top of Ian in order to achieve the desired result:

Katie: It didn't have to be so ugly.

Tom: What are you trying to salvage? The game is what the game is gonna be.

Ian: I'm not trying to salvage anything. I'm telling you what is going through my mind and my heart and my soul.

Tom: Oh, it's your soul that's speaking to us now.

Katie: Why don't you just say, "Hey, I'm playing the game, I'm making double deals everywhere, and I got caught."

Tom: That's kind of refreshing. Actually, you can borrow that speech, that was a good one. I'd love to tell you that it's time to just step up, be a man, and admit to the whole thing. That'll come with age, I guess, when you're willing to just fess up. It's just weaselly to still be saying, "I wasn't gonna do it, I wasn't gonna do it." You slipped tonight, and you blew it.

Dolphin Boy is shattered. He's silent, but we can read his thought balloons: He works with disabled children! He cuts his hair himself, using a mixing bowl! He's Catholic! He's a really good guy! Really!

That good old Catholic guilt comes through for Tom in the end. In the last immunity challenge, Tom, Ian and Katie have to stand on tiny platforms attached to buoys that float several feet above the water. Katie is the first to bail, saying her back is killing her, but Dolphin Boy and Fireman are steadfast, knowing that they don't stand a chance unless they win. Host Jeff Probst starts to look tired. It grows dark. Katie takes a nap. Sometime in the middle of the night, Fireman tells Dolphin Boy he'll take him to the final two if he bails. Fireman doesn't lie, either! Dolphin Boy should do it! But Dolphin Boy hesitates, then refuses. Why?

Finally, after 11 hours and 55 minutes, mostly spent in total silence according to Probst, Dolphin Boy says that he'll give up, but only if Tom takes Katie to the final two, and they both forgive him and pledge to be his bestest friends forever and ever. Fireman can hardly believe his honorable ears. Incredulously, he says that he'd be Dolphin Boy's friend anyway, but that Dolphin Boy would most certainly earn back his respect with such a move. Katie agrees eagerly from the dock, pinching herself and trying to hide her big grin. And so, we witness the power of guilt, in all its splendor and glory! Did I mention that Dolphin Boy was Catholic?

Thus does our honorable, studly leader, Fireman, progress to the final two with Katie, who is neither honorable nor studly nor a leader. After a surprisingly suspenseful run-up to this moment, the suspense finally evaporates: For all her instrumental wheedling, Katie doesn't have a rat's chance of taking home the million dollars.

She tells the voting tribal council, unconvincingly, "I've played this game in a different way than Tom but just as hard." You see, she had a plan from the very start, and she stuck with it.

Greg responds, "Explain to me and the jury how being so pathetic is your plan." This makes Katie cry! She would never, ever say something that mean to Greg! Nice last-minute guilting ploy, but we grow weary of your antics, whiny one.

Next, Caryn is up to bat, telling Katie, "I'm gonna tell you the things I did observe, OK? You were phony and cruel to everyone at camp except Tom and Ian. Aside from that, I also observed: Laziest person at camp, mean, bad at challenges, unkind, and betrayed me. Give me one good reason I should vote for you."

Katie's only response is to shrug and say something weak along the lines of, "Hey, I made it this far. Doesn't that count for something?" Well, technically, yes: It counts for $100,000, cash that is rightfully Dolphin Boy's, since he could've had it instead of blowing it all for the sake of honor. Pshaw! Honor is so overrated!

But not to our heroes, Fireman and Dolphin Boy! Best Friends Forever, the two rode off into the sunset together, planning how to spend their millions as the music swelled! Oh, wait -- actually, Fireman rode off with a million dollars, and Dolphin Boy, sporting a fresh bowl cut, sauntered off empty-handed. Of course, his temporary insanity and surrender to the crushing power of guilt at least earned him a future delivering rousing speeches about honor and dignity and respect to the children of this great nation. And what's more American than turning your lowest moment into something worth celebrating?

Fireman and Dolphin Boy: Both true American heroes, through and through - only one is a lot richer than the other one now.