Making PBS as "fair and balanced" as Fox 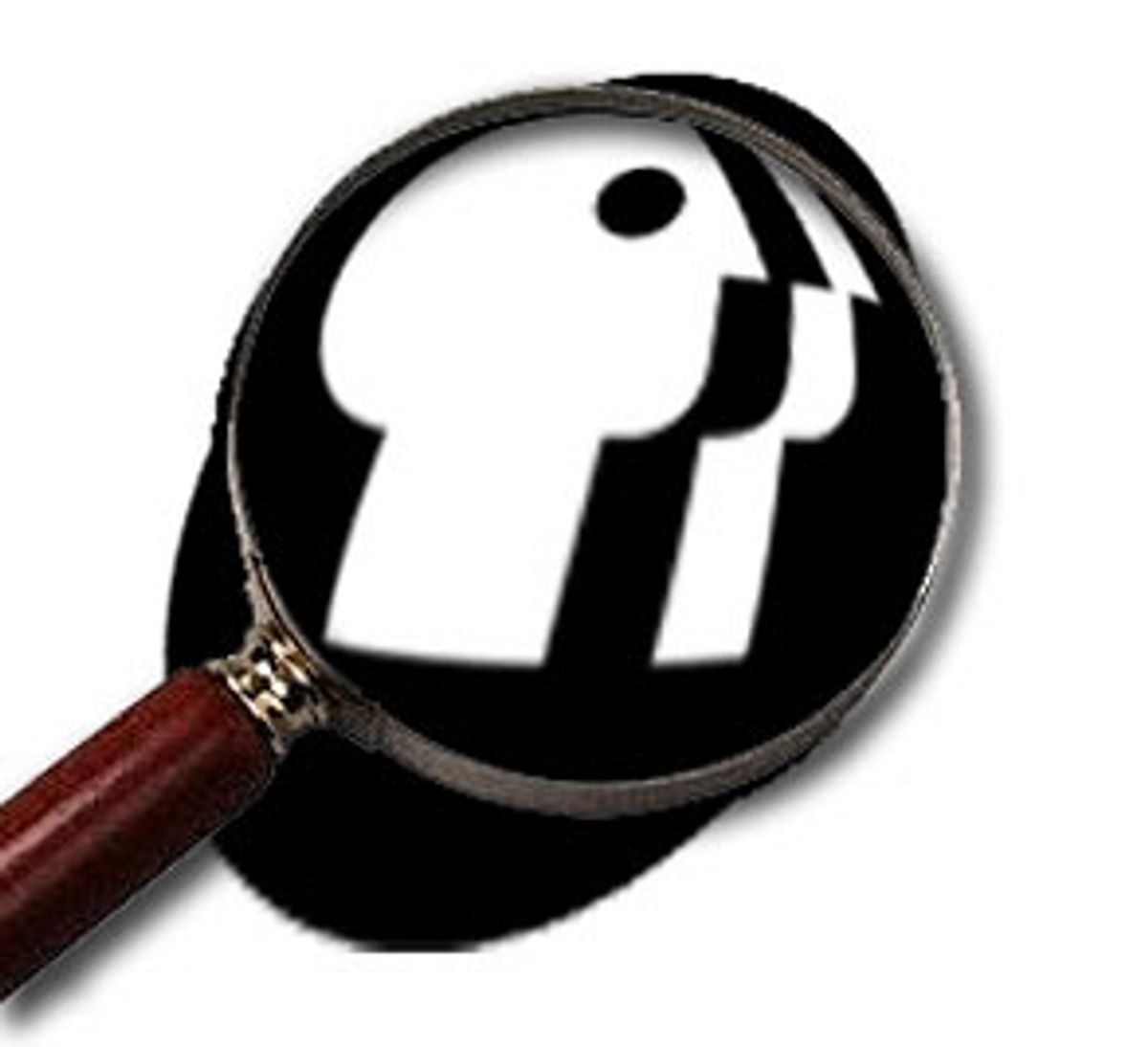 Seen as a way to shine light on the news-gathering process and encourage transparency between reporters and news consumers, ombudsmen traditionally help build a sense of trust. But the announcement by the Corporation for Public Broadcasting -- the federally funded nonprofit group that oversees public radio and television -- that it was creating an ombudsmen's office seems to have done the opposite, raising questions and suspicions about the group's true intent.

Specifically, observers wonder why the CPB, which is largely a funding organization, would get involved in critiquing news programs that it does not create, schedule or broadcast. More disconcerting, though, was the CPB's unique decision to hire two ombudsmen to check PBS for balance. The dueling-ombudsmen format is unprecedented in mainstream journalism.

"It mystifies me," says Geneva Overholser, a Washington-based University of Missouri journalism professor who served as the Washington Post's ombudsman from 1995 to 1998. "What in the world does it mean to have two? It makes no sense." She argues that ombudsman responsibilities are specifically designed to be carried out by just one person as way to demonstrate that a single journalist can be open-minded and listen to all sides of a dispute. By setting up a sort of left-vs.-right, "Crossfire" approach, Overholser says, the CPB model "participates in the ideological charade that journalists can't be fair. This is a perversion of the ombudsman. I'm surprised Ken Bode would feel comfortable with this."

Bode, a former NBC and CNN reporter, is one of the CPB's newly hired ombudsmen. He most recently worked as a columnist for the Indianapolis Star, where readers often wrote angry letters deriding him as a liberal, though he endorsed a Republican last year for governor of Indiana.

When asked last year to write about his worst day as a journalist, Bode detailed the afternoon President Reagan was shot, recalling, "Like many Americans, I never saw President Reagan quite the same again. As someone said at the time, he went into the hospital as Ronald Reagan; he came out as John Wayne."

The CPB's other new ombudsman is William Schulz, an avowed conservative and former editor at Reader's Digest, which the National Review once described as "the quintessential magazine of 'red-state' America." Schulz worked alongside CPB chairman Kenneth Tomlinson, a Republican, for decades at Reader's Digest.

On Monday, the New York Times reported that during a meeting in February with the head of National Public Radio, Tomlinson outlined the CPB ombudsmen's responsibilities and specifically noted that the board planned to hire one liberal ombudsman and one conservative one.

Both Bode and Schulz declined to comment for this article.

The two-person, right-vs.-left approach "is antithetical" to the ombudsman position, says Jeffrey Dvorkin, who holds that position for NPR and serves as president of the Organization of News Ombudsmen. "The value of the ombudsman is as an ideological and political independent."

"Why stop at two ombudsmen? Why not have four or a committee of 12?" quips Carl Stern, a former correspondent for NBC News who teaches journalism ethics at George Washington University and, like Overholser, is a member of PBS's Editorial Standards Review Committee. "Balancing ombudsmen -- when will this end? Are we going to have armies of ombudsmen? This is silliness."

The CPB's unorthodox action comes against a backdrop of increasingly heated allegations about liberal bias at PBS's 349 stations nationwide. Tomlinson has been making several moves to counter what he says is PBS's lack of "objectivity and balance" or, more specifically, the perception of a lack of balance at PBS.

Last week the Beltway battle escalated further when Reps. David Obey, D-Wis., and John Dingell, D-Mich., asked the CPB's inspector general to investigate whether Tomlinson overstepped the law by secretly hiring a consultant, at a cost of $10,000, to monitor the weekly PBS news program "Now With Bill Moyers" for liberal bias. The Democrats want a determination of whether Tomlinson violated the Public Broadcasting Act of 1967, which "prohibits interference by Federal officials over the content and distribution of public programming" and the application of political litmus tests in hiring decisions.

On May 12, the inspector general announced he would launch the requested investigation. Then on May 15, in a speech in St. Louis, Moyers blasted Tomlinson, insisting conservatives' real agenda is to silent journalists who ask tough questions. "The more compelling our journalism, the angrier the radical right of the Republican Party gets," Moyers said. "That's because the one thing they loathe more than liberals is the truth. And the quickest way to be damned by them as liberal is to tell the truth."

Tomlinson declined to comment for this article. As the controversy continues to intensify, he has been sticking exclusively to the friendly confines of conservative media to tell his side of the story. Last week he wrote an on Op-Ed for the Washington Times. And he appeared on Fox News' "O'Reilly Factor" on May 12 and PBS's "Unfiltered With Tucker Carlson" on May 13. During the O'Reilly interview, Tomlinson insisted that he has never talked to the White House about PBS. "The point is not to gain support for the Bush administration," he said. "The point is to gain support for public television." Yet Tomlinson hired Mary Catherine Andrews to oversee the creation of CPB's ombudsmen's office while she was still on the White House payroll.

Tomlinson was among those who greenlighted the creation of PBS's "Unfiltered" last year to provide an additional conservative platform on public television. Fittingly, the show served a useful purpose for Tomlinson on the May 13 broadcast, where he continued to make the unsubstantiated -- and unchallenged -- claim that PBS suffers from a liberal bias and that programs like "Now" do "a lot of damage to public television."

The claim is unsubstantiated because the CPB's own internal polling -- surveys it has refused to release independently -- shows that an overwhelming majority of Americans do not think PBS has a liberal bias. As for the "damage" caused by "Now," the program generated exactly 24 angry e-mails to the CPB during calendar year 2003.

Tomlinson was not challenged much during the O'Reilly and Carlson interviews. At the conclusion of his interview with O'Reilly, Tomlinson said, "We love your show," and Carlson concluded his "Unfiltered" interview with, "I suspect your liberal critics will always feel threatened by you. And [that's] good, as far as I'm concerned. Ken Tomlinson, I think you're great."

One of Tomlinson's key fairness-and-balance" initiatives -- implemented with the help of the White House aide he hired -- was to create guidelines for the new CPB ombudsman positions. The newly unveiled charter notes that the position is independent and "will encourage public dialogue aimed at achieving high standards of excellence and balance in public broadcasting."

An ombudsman typically functions as an advocate for, or representative of, news consumers -- a designated person they can contact to complain about a report. As the Organization of News Ombudsmen outlines the position, "A news ombudsman receives and investigates complaints from newspaper readers or listeners or viewers of radio and television stations about accuracy, fairness, balance and good taste in news coverage."

But the CPB itself has no "readers or listeners or viewers." That disconnect was evident in the first programming critiques offered by Bode and Schulz, which did not appear to be driven by listener or viewer concerns. Instead, both men simply sampled specific programming and wrote up their thoughts. (They reviewed different reports.)

As the station group that purchases, schedules and airs programming, "PBS is the more appropriate organization for an ombudsman," notes Christy Carpenter, a former Democratic-appointed member of the CPB board.

National Public Radio already employs an ombudsman, and PBS is exploring hiring its own. And while there had been some public discussion about CPB's hiring its own ombudsman, the announcement of the hiring of Bode and Schulz caught PBS officials unaware; they were not told that candidates were being interviewed, let alone that the two men would soon start.

But it is CPB's tapping of two ombudsmen that has most raised eyebrows in journalism circles, particularly the suggestion by Tomlinson that Schulz would serve as a sort of conservative advocate while Bode represented liberal complaints.

"I don't think ombudsmen should be in the 'Crossfire' business," NPR's Dvorkin says. "I think it exacerbates conflict rather than resolves it."

Overholser adds, "The whole two-person approach is rigged. Everything about this smells of adhering to a certain ideology and dressing it up as concern about objectivity and balance."