Critics of the new writing section of the SAT say that the only thing the test measures is a student's aptitude for B.S. 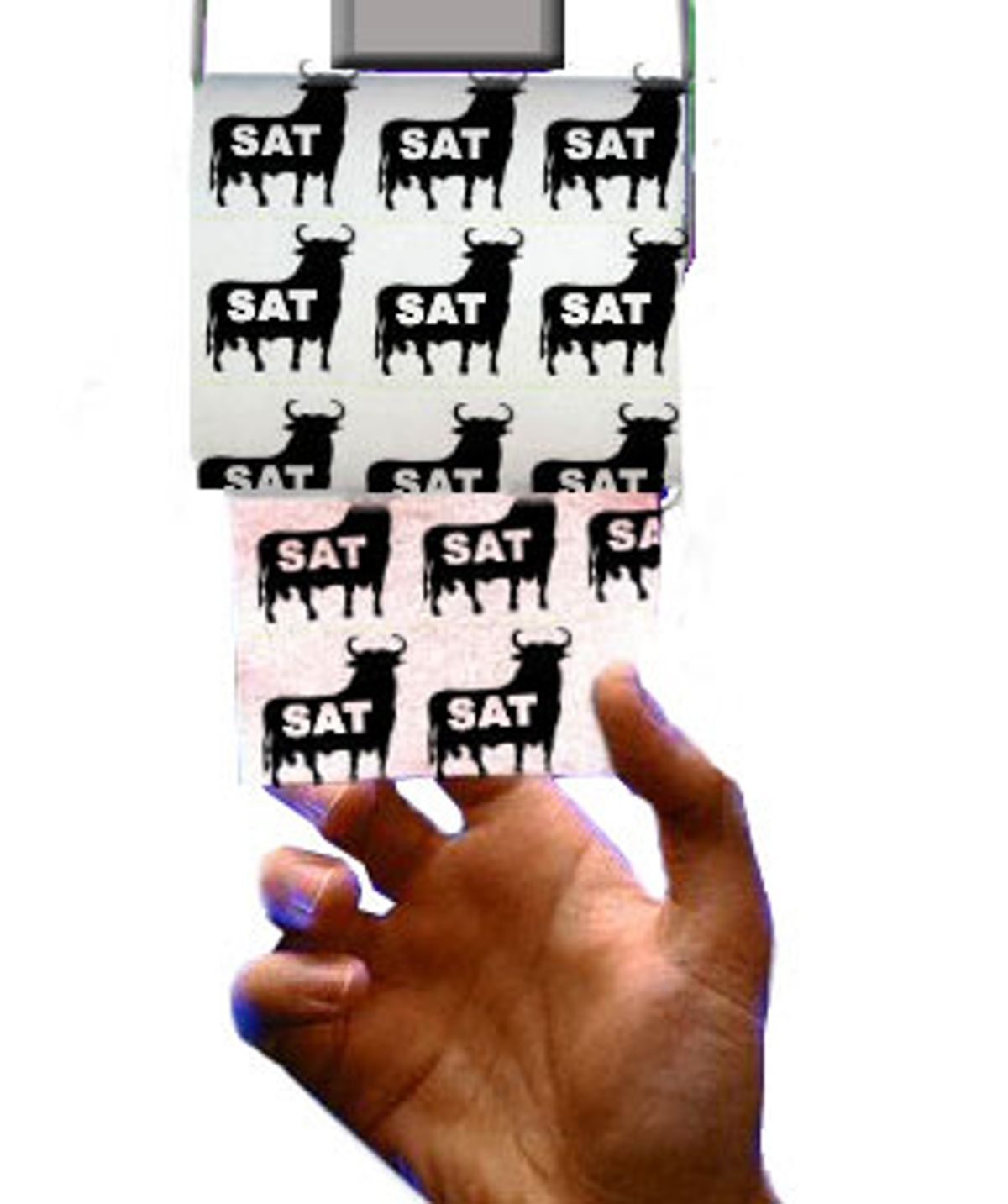 What fresh hell is this? The newly expanded version of the Scholastic Aptitude Test (SAT), first offered in March, has three sections: math, verbal and really verbal. On top of filling in row after row of infernal unblinking ovals -- many of them in a whole new section on English grammar and usage -- students must also write an impromptu essay, from scratch, in 25 minutes.

As it turns out, some students who took the test on May 7 did not feel entirely unprepared. "On the way to the test we had just heard about the MIT study that connected the length of the essay to the scores," says Emily Rackleff, a junior at Newport High School in Newport, Ore. "So we all tried to write as much as possible."

This "MIT study" is actually a series of calculations made by Les Perelman, a director of undergraduate writing at MIT who has developed and administered holistically graded writing tests for 25 years. (Full disclosure: He's also been a family friend for at least that long.) Perelman, along with the National Council of Teachers of English, has concluded that the new essay section, contrary to the College Board's intentions, is not only a lousy test of -- but also a threat to -- students' writing skills.

While attending a recent panel on the new SAT, Perelman, acting on a hunch, reviewed more than 50 sample essays that the College Board had made public for students and graders. He ran some numbers ("because I am from MIT and that is what we do," he says) and found a striking correlation between the length of the essays and their score. (For scoring, each of two graders gives a separate rank of 1 to 6, for a maximum total of 12.) "If you just looked at length and nothing else, you could be right in predicting the score over 90 percent of the time," he says. (To prove his point, he even guessed the scores of sample essays just by gauging their length without reading them. He was 10 for 10.)

Perelman was also dismayed to learn that the College Board, which administers the SAT, has explicitly said -- on the grounds that it is testing writing, not historical, literary, or scientific knowledge -- that factual references in the essays needn't be correct. If you misstate the date of the War of 1812, for example, the readers won't mark you down.

"To write something that's long and has the appearance of having a sound, detailed argument but really doesn't make much sense: There is a term for that," Perelman says delicately. And that is what is being rewarded."

Perelman cites one of the sample essays the College Board provides for grader-training purposes: a composition that uses "Madame Bovary" as an example of the dangers of secrecy. It's not awful, but it does include sentences such as "If secrecy were eradicated, many problems, such as internal division, but also possibly hate, might also be eliminated." On the 1 to 6 scale, it serves as an example to scorers of a perfect 6.

Many students, of course, know exactly what they're doing. "The essay topic was completely inane, the sort of thing I hate to write about," says Sho Uemura, 16, a junior at Stuyvesant High School in New York City, of the SAT he took on May 7. "I don't have any personal opinion on whether our lives are shaped by our jobs. I ended up writing a boring, formulaic five-paragraph essay that managed to fill most of the space. I got it done in about 20 minutes and drowsed for most of the remaining time."

Of course, it's no secret that bullshitting can go a long way toward filling the yawning blank space of a testing booklet (or that it's a skill that serves students later in life). Nor was the SAT ever expected to delight students, or to reward creativity and insight. One might wonder, therefore, why people are getting so worked up over 25 minutes -- or about 500 words -- of a high school junior's life. After all, the essay winds up counting for only a small portion of the total score -- and many colleges are saying that at least for now, it's not about to make or break a student's chances. In fact, only 429 of about 1,600 four-year colleges have officially informed the College Board that they'll require writing scores. Still, since 80 percent of colleges require the SAT for admissions, the real question is how they'll use the new scores. "It'll be beneficial to consider the essay as part of a holistic review of a student," says Mark Hatch, vice president for Enrollment Management at Colorado College. "But it's not something that colleges will be eager to integrate into their academic ranking system right away. We need to study it first."

The main problem with the essay, say people like Perelman, is that it's actually not just about those 25 minutes. Even the College Board says so. Chiara Coletti, vice president of public affairs, says that the organization has long been concerned that, especially in lower-income schools, writing instruction needs improvement. "By putting writing on the SAT, we believed we'd focus more attention on writing in schools from K through 12 and across the curriculum," she says. But it's the wrong kind of attention, say critics. "You're getting teachers to train students to be bad writers," Perelman says. The specter of the essay, he claims, could have a chilling effect on the learning and teaching of writing in high school, encouraging students only to perfect the art of the formulaic (to say nothing of wordy) five-paragraph "write for the teacher" essay.

"The SAT carries such weight that teachers will feel pressured to teach to the test: to help students prepare for the very specific kind of writing that the SAT asks them to do," says Bob Yagelski, associate professor of English at SUNY Albany and chair of the National Council of Teachers of English Task Force on the SAT and ACT writing tests. In fact, in a recent report, the NCTE charged that the SAT's essay test threatens to "compromise student writers and undermine longstanding efforts to improve writing instruction in the nation's schools."

At very least, English teachers say, the essay puts them in a tricky position. "The purpose of academic writing is to get kids to think deeply and explore ideas in as broad a way as possible, to find an authentic voice," says the head of the English department of a suburban Boston high school, who did not want to be identified. "But with 25 minutes to write, they're not thinking broadly. They're thinking, 'Follow the formula.' We could tell students, 'OK, this is just what you do when you take the SAT. Normally we ask you to be broad and deep and thoughtful, but for this particular test you need to go in with this narrow approach' -- well, that makes us hypocrites."

SAT coaches don't necessarily have the same conscience issues as some teachers. "What we recommend is that you memorize the basic essay formula and a couple of facts about a topic you're interested in, so that you pretty much know what you're going to write before you take the test," says Yale sophomore-to-be Janet Xu, guest editor of the latest edition of the SAT guide "Up Your Score: The Underground Guide to The SAT." "This works because the SAT questions are usually very broad."

In response to Perelman's concerns, the College Board has issued a statement ("I'd give it about a 3," says Perelman) insisting that there is -- and should be -- a general correlation between length and score. "We do find plenty of essays that are long and haven't developed a point of view at all, and short ones that manage to accomplish an amazing amount, but it's rare. I think that's just the way it is," Coletti says, noting that the trained graders, themselves teachers, can surely be relied upon to make the proper distinctions.

Coletti also asserts that writing on demand does have its place -- that it's a necessary skill for tackling not only the on-deadline workplace memo but also the college exam blue book. According to the colleges the board has surveyed, "When called upon to do this, students often display an alarming lack of skill," she says. "A lot of them simply didn't learn it."

True enough, says Xu. Although she's not enamored of the essay section itself, she sees the new SAT as "simply a recognition of the new direction that standardized testing is taking," she says. "Instead of testing kids on whether 'apple' is to 'fruit' as 'magnanimous' is to 'sycophancy,' it's actually testing them on skills they need in college! Gasp!"

Ask a student what he or she thought of the essay, though, and you're unlikely to hear, "Well, it gave me the opportunity to develop and show my preparedness for college, not to mention the odd workplace memo." According to a recent survey by Kaplan Test Prep, only 13 percent of test takers thought the essay was the hardest section of the test -- but 55 percent of them said their scores would not represent their skills. Over 25 percent said they ran out of time and had to turn in unfinished work.

"It was really overwhelming," says Andrew Elliman, 17, a junior at the Kent Denver School in Denver, Colo., who took the test in March. "The question was something like 'Describe the importance of creativity in today's world.' If someone asked you that, you could think about it for years and not come up with a good answer. But 25 minutes? I'd never written an essay on such a broad topic in such a short time. It came out of nowhere, totally broadsided me, like a car accident."

According to the SAT's most cynical detractors, the College Board is torturing students like Andrew only as a means of self-preservation. The rumor is that the writing component was added only in a desperate effort to keep the University of California, a giant client, from dropping the test as an admissions requirement. "The motivation for the 'new' SAT 'writing' test -- we always put 'new' and 'writing' in quotes -- is that it's a marketing ploy," says Bob Schaeffer, public education director of the National Center for Fair and Open Testing, suggesting that the College Board basically grafted what used to be the SAT subject test in writing onto the "new" test. "The College Board took what had been an unpopular, optional test and used it to burnish their image and enhance their bottom line," he says. Coletti adamantly denies these claims, stating that some sort of writing section has been in the works for at least a decade but has hit mainly technological speed bumps.

Whatever motives you may ascribe to those who inflict the SAT, one point is salient, says Perelman. "We're one of the few developed countries in the world where such testing is done by private agencies with no supervision by a public or quasi-public organization. It's very much as if we allowed drug companies to market drugs without the FDA. To quote Juvenal in his sixth Satire: Who watches the watchmen?"

"I could have told you that that was from Caesar's 'Gallic Wars,'" he adds. "But it wouldn't have made any difference."