Embracing the dark side of the brand

I'm an accessory to mass-marketing crime: I actually encourage my son's obsession with Legos and "Star Wars." 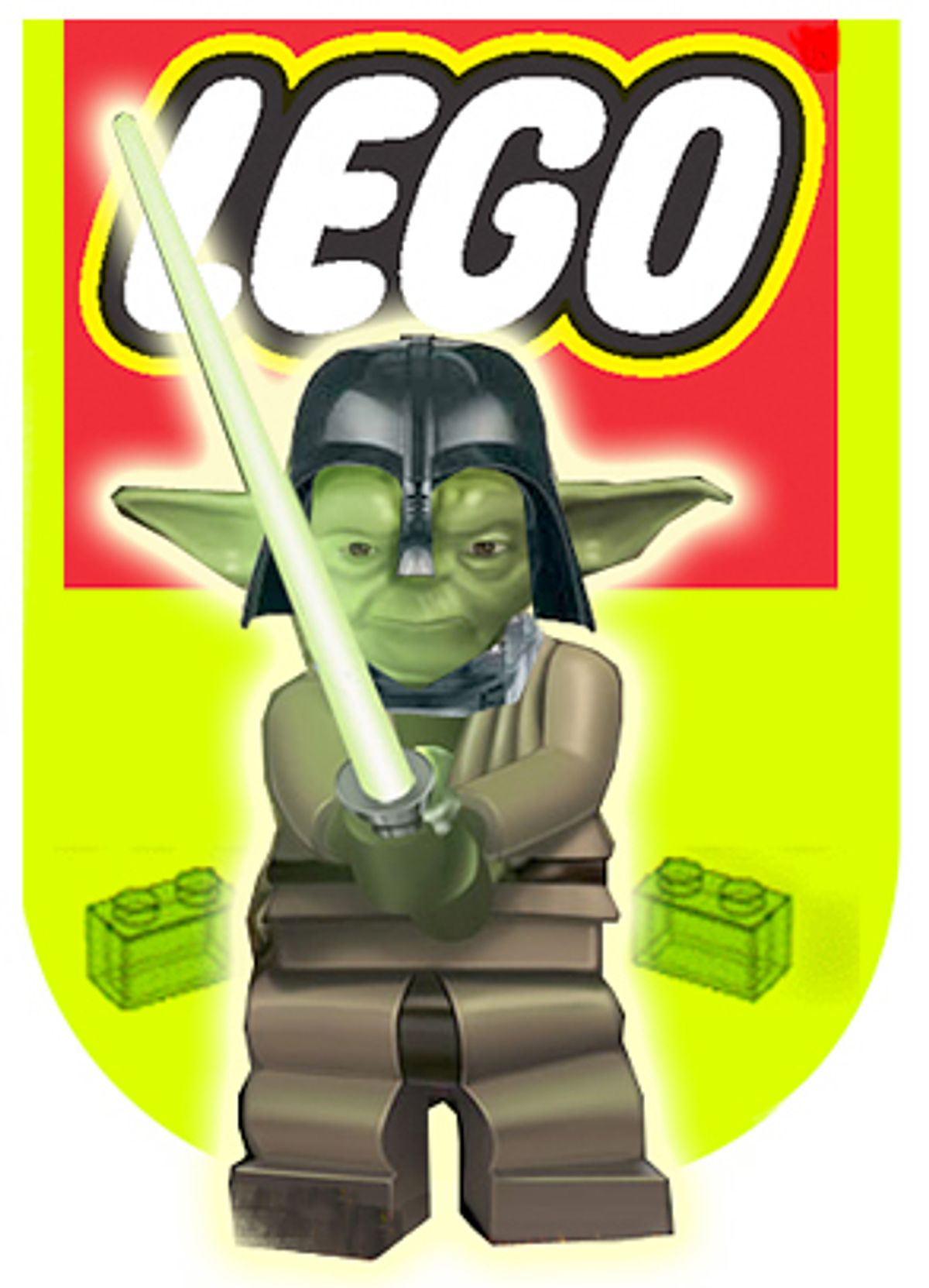 My 7-year-old son's eyes aren't yet fully open, but he is already mumbling something about "Star Wars" and Lego. His voice is still rough with sleep and almost incomprehensible, but I can tell he's clearly troubled.

It seems that the Lego representation of Gen. Grievous -- a four-armed, light-saber-wielding villain from "Revenge of the Sith" -- doesn't match the way the character looks in a commercial for the movie seen on the Cartoon Channel. I'm not sure if it's the color of the light sabers that's been screwed up, or maybe the number of arms. Whatever the case, his subconscious has been crunching on this all night. There's been a great disturbance in the force; the two premium brands in his life, "Star Wars" and Lego, are misaligned.

I'll bet he's right. Since he's been old enough to snap two bricks together, my son has been Lego-obsessed, and since building his first "Star Wars" Lego model, the Naboo Fighter, he has pursued a headfirst plunge into the intricacies of "Star Wars" mythology. My son falls to sleep with Lego catalogs and "Star Wars" model schematics clenched in his hands. He can tell you the price of every set associated with Episode II, and he can put togther a 400-piece TIE Fighter from memory. One year, he declared that his name was "Darth Tarantula."

I am bemused, horrified, delighted and baffled by this. I was never a fan of "Star Wars," not even the original, which I saw as a 15-year-old nerd whose main hobby was the voracious consumption of science fiction. But I thought the movie was hokey. It didn't come close to filling the space in my head occupied by Asimov and Heinlein and Niven and Bradbury. Mark Hamill sucked. The storm troopers were ludicrous.

And yet now I find myself looking forward to Episode III, because, as my son points out every 15 minutes, we are going to see it "in the theater." His "Star Wars" experience has been built on videotapes, DVDs, Lego sets, and young-adult novelizations -- now he's going to to see the real thing, Jedi knights battling it out on the big screen. It'll be the biggest moment in his young pop cultural life and I can't wait to witness it.

But I also feel like a bad father. I'm an accessory to mass-marketing crime, aiding and abetting two juggernauts in their overwhelming assault on a little boy's impressionable mind. I buy the sets for birthdays and Christmas, read the novels to him right before bed, even purchase elaborate compendiums of "Star Wars" trivia for him to pore over. I have rolled out the red carpet for George Lucas and Lego, when I should be maintaining eternal vigilance against runaway consumerism.

Right? I mean, isn't this the point where we insert the standard boomer rant about how Lego used to be so much cooler in the days when it wasn't all about elaborate "sets" and when a kid's creativity was given full rein? Isn't this where I am supposed to wring my hands at the way kids today are hammered by the movie of the moment at every possible access point, from their cereal to their Cheez-It snacks to their juice box to every commercial on a 24-hour kids network? Shouldn't I be alarmed at how crestfallen my son was when I failed to remember to tape "Revenge of the Brick" -- the "Star Wars" Lego movie?

Advertisers spend some $12 billion a year marketing to children -- and this is what happens! The kids start dreaming about the Lego representations of "Star Wars" characters! It's a national outrage! Alert the media!

Oh poppycock. My daughter grew out of Barbie. My son will grow out of "Star Wars." The only difference is that I'll be sad when Jedi Starfighters lose their ability to spark, because my son's burgeoning sci-fi fixations give me a not-so-secret thrill. And there's no getting around it: "Star Wars" Lego sets are way cool. (Not half as cool as what my son does with them after he's finished following the instructions -- which torpedoes the whole cramping-kids'-creativity argument -- but still really neat all by their lonesome.)

In a way that the movies never did for me, the intersection of "Star Wars" and Lego captures the excitement and fantasy and unlimited future of possibility that hooked me on an endless parade of cheap paperbacks 30 years ago. So I find that the hokiness doesn't bother me. Hayden Christensen doesn't bother me. Not even Jar-Jar irks. I'm happier about the quality of my son's obsessiveness than I'm disappointed in the acting abilities of the Skywalker family.

Because I know what it's like to be obsessed. And it's OK. I used to draw pictures of rocket ships and write stories about colonies on other worlds. I would splurge my allowance on translated-from-the-German "Perry Rhodan" novels that will never be considered lasting contributions to the literary canon. So what if my son spends his dollars (or mine) on yet another "Star Wars" Lego set? The medium of expression is different, but the dream is the same.

Yes, the machinery of modern capitalist entertainment has him lined up in its sights and surely will do everything in its power to never let him go. But I'm confident that, just as he does with his painstakingly assembled Lego sets, so will he just take it all apart and rebuild it the way he wants to.

He's already started. On Sunday, I picked him up from a play date with another similarly Lego-fixated boy. Before leaving, he had to show me what he had just built. It was a combination of two "Star Wars" Lego versions of familiar "Star Wars" characters. A light-saber-wielding, Darth Vader-helmeted...

"See," he said, brimming over with the truly extraordinary powers of gleeful delight that only a kid can generate. "It's Darth Yoda!"