The new face of the Democrats

Let conservatives co-opt "South Park and "The Incredibles." It's time for liberals to get in touch with the free-range, foul-mouthed, gunslinging antiheroes of "Deadwood." 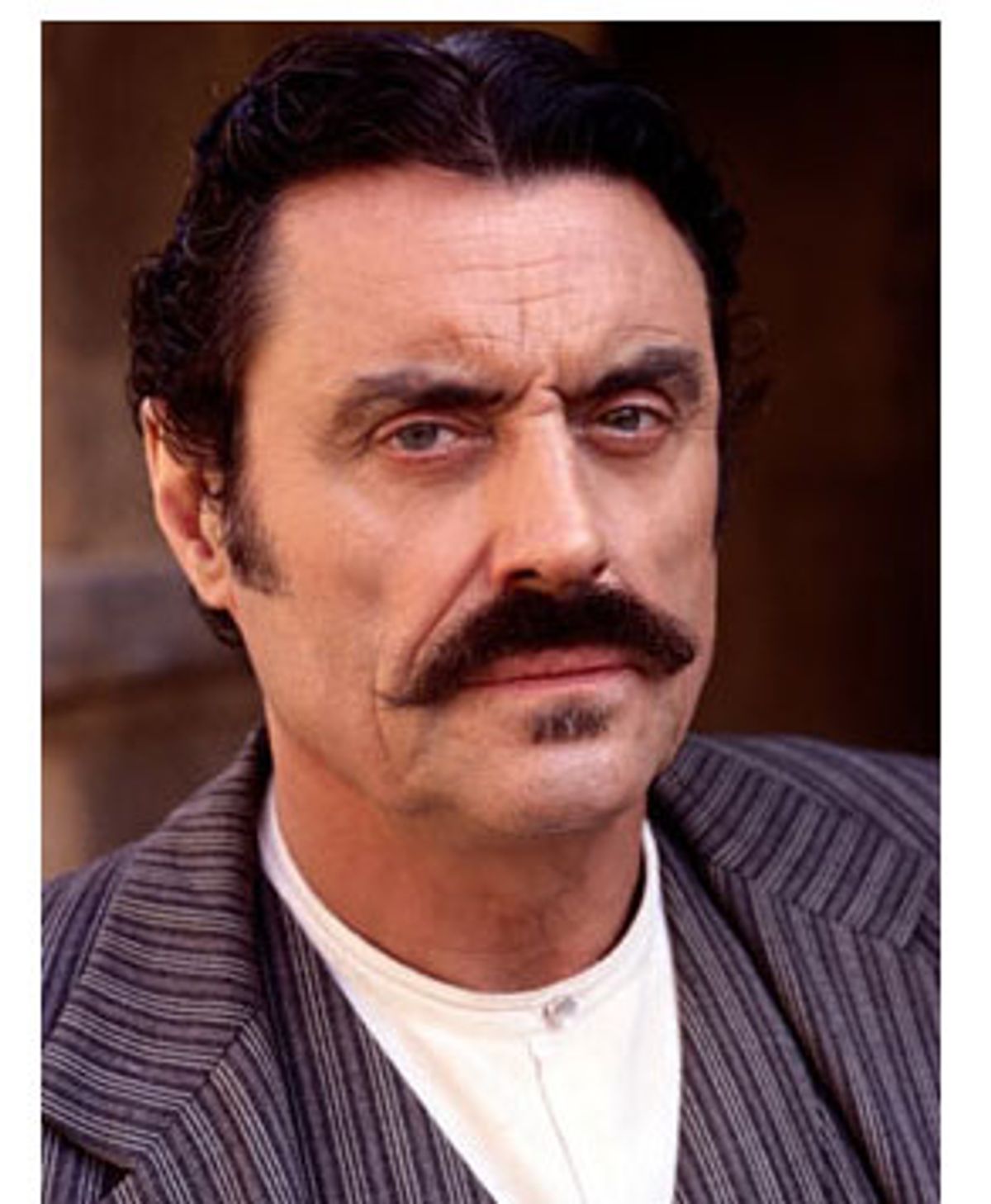 On Page 99 of Brian Anderson's new book, "South Park Conservatives: The Revolt Against Liberal Media Bias," an Arizona State student named Eric Spratling makes the blunt case for why America's Party of God should hitch its wagon to television's leading popularizer of the word "goddammit."

"The label is really about rejecting the image of conservatives as uptight squares -- crusty old men or nerdy kids in blue blazers," Spratling told Anderson. "We might have long hair, smoke cigarettes, get drunk on weekends, have sex before marriage, watch R-rated movies, cuss like sailors -- and also happen to be conservative, or at least libertarian."

In other words, it's all about the re-branding ... with perhaps a hint of defensive self-justification thrown in (We're not uptight, honest!). For years now, commentators on the right have been appropriating whatever strands of friendly popular culture they could grasp -- "The Incredibles," Dennis Miller, even "The Simpsons" -- in an often comical yet undeniably successful attempt to overhaul the default image of the Grand Old Party from the home of scary old creeps like Jesse Helms to "Star Trek"-quoting smarties like Jonah Goldberg. Anderson argues that a new generation of feisty Republicans has used talk radio, cable TV, blogs, book publishing and "fiercely anti-liberal" comedy to roll back the "liberal monopoly" in Hollywood and Manhattan. "A new post-liberal counterculture," he says, "has emerged." Other conservatives have employed these familiar cultural cues to demonstrate that, hey, they too are normal people. Even normal hippie people, belonging to organic food co-ops, bustin' with the Birkenstocks, and inventing cute new nicknames to describe themselves seemingly every week (Crunchy Cons, Eagles, Skepticons, whatever).

The net result of this narcissistic noodling is an expanded political tent purchased with the dirt-cheap currency of pop culture references by non-politicians. The president never had to pretend he liked "South Park" creators Trey Parker and Matt Stone (also the brains behind the short-lived "That's My Bush"), yet Anderson's book and similar arguments have helped nudge the crucial "South Park" swing vote into Republican play. It's a much more efficient and dignified approach than, say, sending John Kerry out duck hunting, or loading Mike Dukakis into a tank.

But an interesting thing happened the second decade into the revolt against the liberal elites: The right won, at least as measured by control over the federal government, while making measurable inroads into traditionally liberal outposts such as the media, academia and even the Public Broadcasting Service. What was once the language and tactics of a guerrilla minority -- licking its wounds and lashing out at lefties in enclaves like talk radio, reaching for unwitting allies in the culture wars -- is now the new battle hymn of the republic. And it's the Democrats who are in desperate need of re-branding.

What to do? "The West Wing," despite a recent resurgence, offers the same goo-goo liberal wish-fulfillment that Hollywood has been oozing for decades. "Saturday Night Live" hasn't been countercultural since the Carter presidency, "Doonesbury" long ago lost its anti-authoritarian kick, and the literary lions of yesteryear are either dead or writing cover stories for Parade and armchair paranoia for the Huffington Post. Michael Moore is a one-man fundraising tool for the GOP, Bruce Springsteen is a fraud, and Jon Stewart, God love him, is one or two more pious lectures away from morphing into Ed Asner.

Worse, while the right commentariat has been appropriating genuinely racy and transgressive content, the left political establishment has been crusading against it. The worst national nanny on the Federal Communications Commission is Democrat Michael Copps; Hillary Clinton and Joe Lieberman have taken up where Tipper Gore left off; John Kerry pledged in his campaign bio that a "major focus" of his administration would be "saving the Internet from hype and filth"; and during the 2000 Democratic National Convention then-chairman Joe Andrew canceled a party at the Playboy mansion, explaining that it was "neither appropriate nor reflective of our Party's values." (Andrew had a different set of values altogether when writing a masturbatory 1993 spy thriller called "The Disciples" in which a 300-pound black woman with "melon-wide lips" sexually tortures an American agent named, uh, Tommy Wood.)

Eleven years after the Gingrich revolution there is evidence galore that the two armies in the culture wars have simply switched sides after swapping the reins of power. The Republicans are now the party of big government and optimistic Wilsonian adventures abroad, while the Democrats flirt anew with federalism, fiscal sobriety and sour isolationism. Within this realignment, and the religious right's continued overreach in the Terri Schiavo case and others to follow, lies a golden Democratic opportunity for cultural re-branding. Yes, cocksuckers, it's time for liberals to get in touch with their inner "Deadwood." It's good politics, better philosophy and (most important of all?) damned fun.

HBO's astonishing Wild West show, for those who haven't seen it, is a bracing slap in the face to Hollywood's mythical and cheerfully bogus convention of the western, and a ribald, murderously raw, yet inspiring celebration of frontier ingenuity and the American language.

As series creator David Milch recently told Salon, "90 percent of the characters are real," including purported hero and reluctant sheriff Seth Bullock (who, among other things, created Yellowstone Park,) Wild Bill Hickok (whose murder provides the dramatic backdrop to Season 1), the shaky alcoholic Calamity Jane, and above all, the brutal and utterly compelling brothel and bar owner Al Swearengen.

"Deadwood's" realism, wrapped in Milch's signature brooding on human complexity (he created the character Andy Sipowitz on "NYPD Blue"), are used to probe a fascinating question: What happens when there are no laws? Rampant murder is one obvious by-product, but so is the fascinating development of spontaneous and beneficial order, where traditions (such as sharing peaches at town meetings) are created by accident and clung to out of touching necessity, and where the federal and state governments are understood to be land-grabbing enemies to be opposed or at least swindled.

"I am a sinner who does not expect forgiveness," Hearst Corp. representative (and big-time sinner) Francis Wolcott confesses in a recent episode. "But I am not a government official."

At a time when Washington is passing laws to intervene in individual medical cases, and self-described federalists want to amend the Constitution itself to prevent individual states from experimenting with marriage laws, "Deadwood's" skepticism of government and celebration of individuality couldn't be timelier. And its viciously profane yet pragmatic demonstrations of tolerance feel more stiff-spined and American than an anti-defamation industry that has been enthusiastically adopted by the same conservatives who once mocked it. Episode 22, for example, has this delightful live-and-let-live exchange:

Silas: You talk like you take it up the ass.
Hugo: I do not, my friend Adams, take it up the ass.
Silas: Don't call me your fuckin' friend!
Hugo: But I suspect those that do consider that they advance their own interests. Like them, shall we not pursue that which gratifies us mutually?

In Episode 2, after Bullock objects to Swearengen's anti-Semitic insults of Bullock's partner Sol, Sol refuses to let words get in the way of business: "I been called worse by better."

There is an excellent pragmatic political reason to embrace "Deadwood's" frontier ethos as well -- the West, and especially the Mountain West, may be the key to the Democrats' electoral future. The "Western strategy," chewed on daily at Web sites like New West and WesternDemocrat, aims to extrapolate from the interesting trend of popular Democratic governors like Brian Schweitzer, Bill Richardson and Janet Napolitano running pro-Bush states such as Montana, New Mexico and Arizona, as the region as a whole grows sharply in electoral votes. This new Western breed of Democrat tends to be pro-gun, anti-tax and shruggingly tolerant of their constituents' various political beliefs and religious affiliations.

"When you've got more cattle than people and you've got blue sky that goes on almost forever," Montana Gov. Schweitzer told Salon recently, "people have got room to roam without bothering each other. Live and let live."

As "Deadwood" and the success of these politicians illustrates, that gruff tolerance and natural skepticism toward authority is written into the very DNA of the West. It's no accident that Barry Goldwater's libertarian take on Republicanism originated from Arizona, and it becomes clearer with each day that the modern GOP has little in common with the man whose idea of limited government meant real separation of church and state, and the "constitutional right to be gay," among other heresies.

Under Bush, and too often with the Democrats' acquiescence or even support, the federal government has butted into our bedrooms, our locker rooms, and our living rooms. Right now there is wide open space on the political spectrum for someone to treat government as a grudging necessity to meet specific and limited goals, whether those are policing Deadwood's murderous streets, or guaranteeing healthcare for children while balancing a budget. There's electoral gold in them thar hills!

And there's fun, too. Above all else, "Deadwood" is a pleasure to the senses. Prospectors and frontiersmen were "counterculture" a century before anyone had invented the term, inspiring the very people whose 1960s transgressions created the movement that "South Park" conservatives have been itching to roll back -- Bob Dylan, San Francisco heads who decamped to Virginia City, Ramparts editor Warren Hinckle. There is a natural connection between the Wild West and anti-authoritarianism, and real cowboys never go out of style. If the Democrats embrace this and adjust their outlook accordingly, there might finally be a major party worth voting for.