Land of the gray hats

Murderous double-dealing and a loveless wedding: What passes in "Deadwood" for a happy ending. 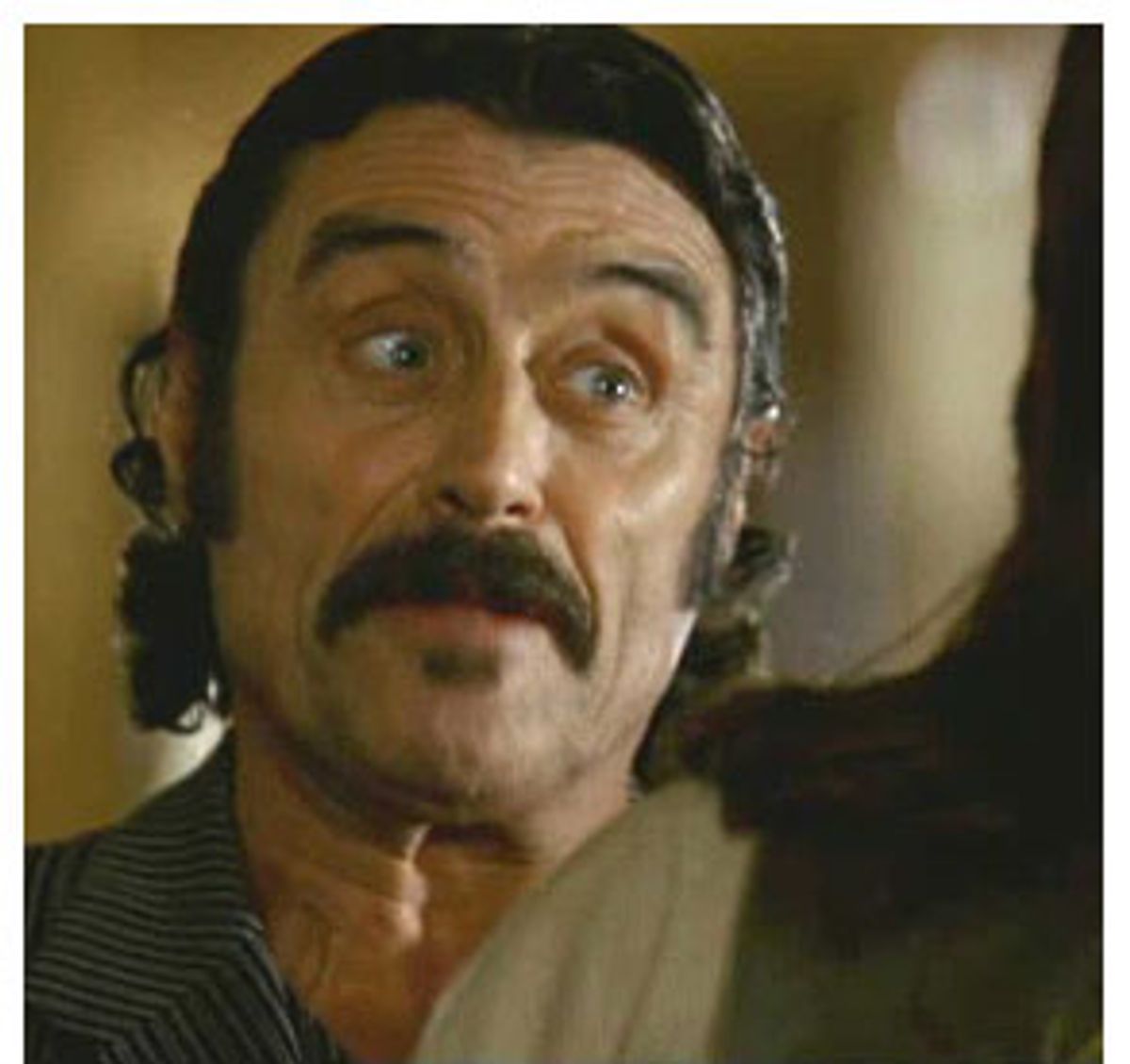 While the traditional western showcases men whose ideals mold their fates, Deadwood, S.D., as depicted in David Milch's HBO drama, is a place of compromise. In such a vile, chaotic and frightening place as Deadwood, the forces of good and evil battle within each man, so that instead of black hats and white hats, each wears a different shade of smudgy gray. Sure, there are swindlers, whores, alcoholics, power-hungry scoundrels and greedy capitalists here, but even the well-intentioned, upstanding citizens inevitably possess dark inner selves, or they're cajoled into selfish behaviors that go against their values, or they're forced to abandon their ideals in order to survive. As with everyday life, at times it seems as if there's no rhyme or reason to any of it and an endless series of disappointments awaits. At other times, though, it seems that even within the boundaries of an unwanted sacrifice, there are glimpses of beauty.

Accordingly, the loveless wedding of Alma Garret and Ellsworth and the town's successful bid for a satisfying agreement with Yankton provided the perfect ending for the second season, dominated as it was by characters trying to win themselves some semblance of security in a tumultuous place.

At the center of the storm, as always, was Al Swearengen, a character who, befitting of the town, manages to be simultaneously malevolent and forgiving, frightening and irresistibly charming. And even though he's a roundly selfish man, manipulating everyone around him in order to win more power, it's impossible not to cheer him on as his power increases. While there's always an appeal to a character who finds a way to win no matter what his circumstances, Swearengen may also be the most charismatic, sharp-minded, and complex figure in the whole town. He charms at will, has empathy for the powerless, from Jewel to Wu, and has perhaps one of the most unpredictable personalities and interesting minds ever depicted on the small screen.

In last night's finale, when George Hearst finally arrived in Deadwood to look after his considerable interests there, it was impossible to know what Swearengen would do. How would he handle the arrival of a famously wealthy, powerful man to the camp, one who would surely threaten his control of its operation, one with whom he'd had no previous access, while his rival Cy Tolliver had developed a relationship with Hearst's henchman, Francis Wolcott? Given Swearengen's proclivity for brash displays and lording his power over others, you might expect him to come out with guns blazing, and threaten Hearst in some way, back him into a corner, or keep him at arm's length, attempting to manipulate him from behind the scenes.

But Swearengen is much smoother than that.

Immediately recognizing Hearst's interest in keeping up an upbeat, pleasant front, he engaged him in small talk and played to his ego by making it clear he knew little of the ways of such a worldly capitalist, but did it all with an edge of irony, hinting, of course, that should Hearst decide to take him on, he would face a formidable opponent. He presented the complicated question of Wu's rivalry with Hearst's Chinese representative by pretending to cede all decision making in the matter to Hearst, while making it painfully clear that Hearst's man was already enraging the locals, and to enable him further would guarantee trouble. Hearst, like Swearengen, demonstrated that he's a pragmatist above all else, and quickly agreed that Wu could continue to lead and the man who Wu referred to as "San Francisco cocksucka" would be displaced. Then Swearengen and Hearst shook hands, and the look they gave each other landed somewhere in the uneasy territory that lies between congeniality and suspicion.

In fact, the scene between Swearengen and Hearst embodied exactly what makes Deadwood such a rich, fascinating place: Here you have two characters who are the perfect match for each other, both extremely successful and used to getting what they want. They both know, though, that they are required to come to a compromise if relations are going to start off on the right foot. They each recognize that they're staring down a dangerous opponent, and they need to make their powers clear, but also want to appear nonchalant about it. The way the exchange plays out makes perfect sense, is breathtaking to witness, but is also completely impossible to predict at the outset. In other words, these characters have such complex motivations and nuanced senses of the world, they're so fully imagined and thought out, that they're as interesting to watch as real people, except that they're sharper and more charismatic than most people you'll meet in your lifetime.

And, of course, there's the humor in the scene: Wu staring wide-eyed at the two, then obediently muttering "cocksucka" when Swearengen asks him to; Swearengen's hinting at his dark dealings by saying he's a terrible shot except at very close range. "Deadwood" creator David Milch doesn't just present us with dialogue and scenes that surprise and confound our expectations, he laces them with cleverness and humor that arise from the odd quirks and blind spots and weaknesses of the characters themselves.

And who would predict that Jane and Joanie would become friends, and that the pair would be their most relaxed, easy selves around each other, Jane swearing with impunity and Joanie quietly issuing orders? Who would expect that Ellsworth would be so hesitant and unhappy on his wedding day? And wasn't it somehow satisfying that Swearengen, upon spotting Trixie and Saul going off to the wedding, would yell down in a good-natured way, "Well ain't you two a fucking picture!" in effect giving them his blessing to have a good time?

But every moment on this show is graced with one uneasy agreement or another: Swearengen tightens his hold on the commissioner and Merrick while letting Trixie go her own way; Bullock reaches for his wife's hand while they mourn their son, but looks shocked to see Alma's face after her wedding; Tolliver regains his footing after feeling out of the loop and blackmails Hearst with remarkable swagger, but his reckless goading brings him trouble when he's stabbed in the gut by his former associate.

In Deadwood, we learn, compromise is necessary for survival -- but that doesn't make it any easier. Summing up the necessary sacrifice she's making in marrying to avoid having Bullock's baby out of wedlock, Alma Garret addresses her dead husband in her mind before her wedding. She confesses, "I am so afraid that my life is living me, and soon it will be over, and not a bit of it my own." Her next words not only echo her predicament, but reflect the inescapable imperfections and compromises built into most of our lives. She says, of her future husband, "He is a good man, and he whom I love is here as well."