In the "Desperate Housewives" finale, Mary Alice returns -- sort of -- and Wisteria Lane gets more twisted than we'd ever hoped. 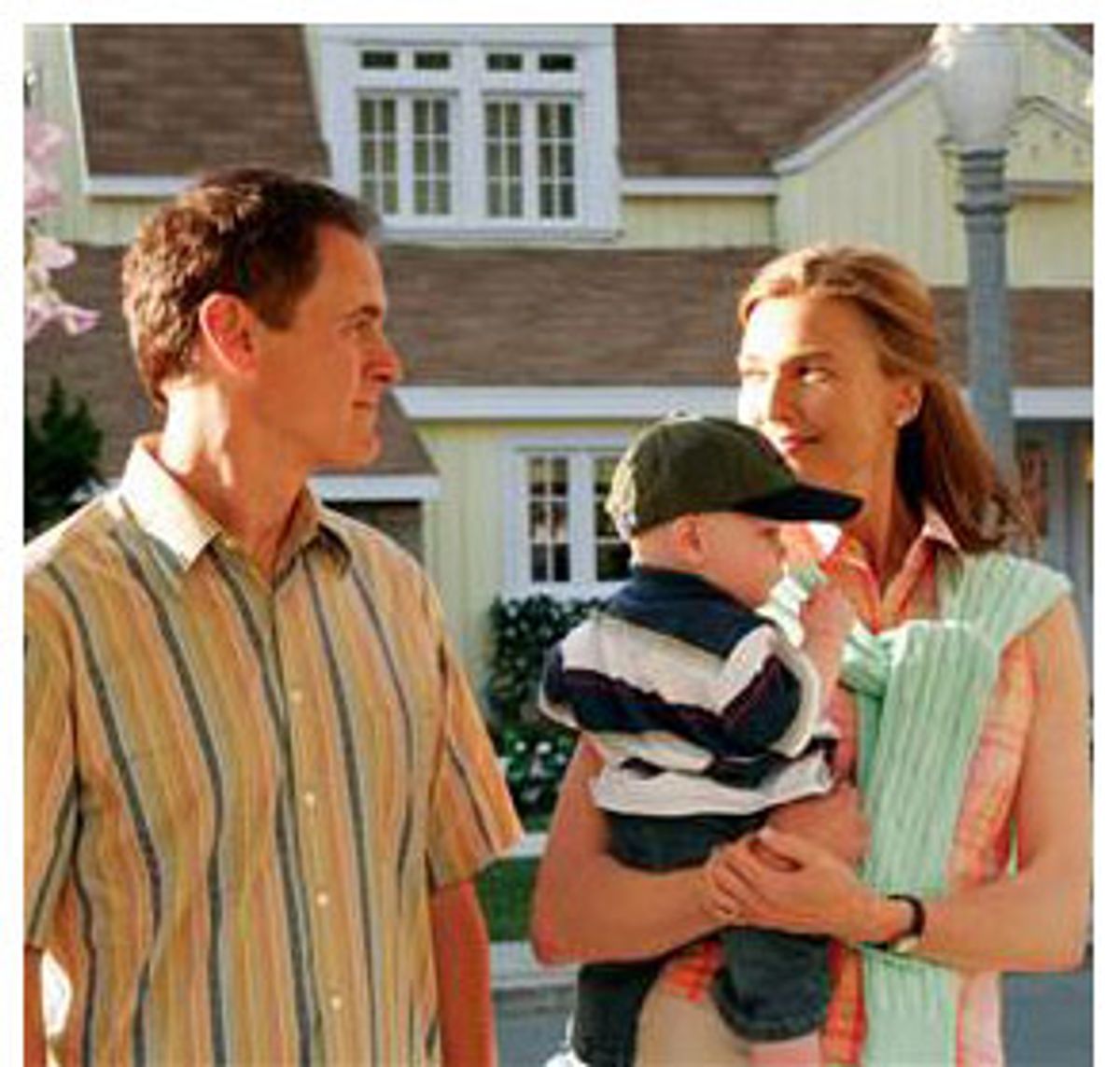 INTERIOR, A FORMAL DINING ROOM. It is 20 years later. Through the window, we see a lawn, a white fence, and firemen floating by, waving in slow motion from the back of their truck. BREE, as pale as an ice sculpture, is polishing her silverware set. Her lips are pulled tight, her face is too thin -- but her house is immaculate.

Well, at least it could have been.

Last nights season finale stomped mercilessly through suburbia like, well, that thing in the jungle in "Lost." And the Fearsome Hausfrau Four are now officially five: Mary Alice, the dead one, has reappeared to settle her remaining corporeal business -- the central mystery of the first season, the events surrounding her season-opening suicide. To the finales credit, it coughed up almost as much plot as youd get if you held Aaron Spelling upside down and shook him vigorously.

"There is a motive to every mystery," began one of Mary Alices usual  and appalling -- voice-overs. "An answer to every question." And "All you have to do is take a closer look." And "Love, laughter, friendship and, sadly, secrets." Sure, sure.

Mary Alice, it turns out, is actually named Angela -- and, even before she found quiet, peaceful (ha ha) Wisteria Lane, she was, she says, leading "a life of quiet desperation." She took out trash, made breakfasts for her husband, Paul, and worked in the evenings at a hospital. Wow, that is quiet and desperate! The mass of (wo)men, apparently, lead lives of little errands and casual consumption.

But we knew that, or we wouldnt be watching a network that literally cannot air programming for more than five minutes without a commercial break for Coors or Quiznos. FIVE MINUTES! Its disgusting and outrageous! Wont someone do something?

Anyway. This chick named Dierdre shows up; apparently Mary Alice knows her from when she worked at a drug clinic or something. Dierdres all cracked out, and needs money. "Youre using again, arent you!" says Mary Alice/Angela. Mary Alice opens the door to show her out, but Dierdre says, "Ill sell you my baby."

Her husband is opposed, but Mary Alice gives him the hand -- literally, "Stop in the Name of Love" style -- and slowly closes the door.

First of all: what? Exactly how hard is it for a suburban white couple to get their hands on a baby -- even one of those admittedly more expensive little white ones? Is that the crack whores old standby for cash -- barge into any random persons house and grandly announce, "YOU MAY PURCHASE MY WOMBFRUIT!"?

Long story short: Zach, the troubled pseudo-foundling son of the suicide Mary Alice, had been named Dana by his mother Dierdre, which clears up some of the shows earlier misdirection about a dead baby girl in the family named Dana. (Or, as he puts it to Susan later, as he holds her hostage: "I never had a baby sister! Im Dana! They stole me and changed my name! Everyone lies to me!")

But back then: "We were as happy as any family could be," Mary Alice v.o.s. "Until one night, three years later, when there was a knock at our door. And I was desperate once again." Mary Alice, perky with her kicky new name on Wisteria Lane, is chopping vegetables. There is talk of putting in a pool. But at the door, its Dierdre, the baby-selling junkie-whore! Over coffee -- Hazelnut Belgian Cafi? Suisse Mocha? Havana Guano? Which International Coffee could it be? -- "I spent a lot of my fathers money hunting you down," says Dierdre. "I kept our little secret. As you can see, Ive gotten myself cleaned up."

"You cant have him," says Mary Alice. "If you think Im giving my baby to some junkie youre crazy." Someone is called a self-righteous bitch. "LEMME SEE YOUR ARM," says Mary Alice. (And this is where you start wishing one of the other Housewives were dead instead, because this Mary Alice chick is totally fun-nuts!) Paul throws Dierdre off the stairs. She beats him rather wanly with a poker. Mary Alice puts her hand over her mouth, in that time-honored "Housewives" gesture of shock and ethical transformation.

Having speedily discharged her day-to-day moral code, she picks up a knife and stabs Dierdre right in the gut. Hot! Paul comes to. Dierdre falls to the floor, gurgling. Pauls forehead is bloody, as if hed walked into a very tall hamburger. "Oh, Mary Alice, what did you do?" says Paul. (Five people had credit for the episodes script, this might be a good moment to mention.)

Upstairs, Mary Alice empties the toy chest. Zach -- Dana -- wakes up. "Mommy needs to borrow your toy chest," says crazy Mary Alice. Later: "You said they were pouring the concrete for the pool tomorrow. Well put her in this." Paul, always practical: "She wont fit!" "Well make her fit," says Mary Alice. Seriously, bring us some Mary Alice back from the grave!

To satisfy their moral whatever-tude, they check Dierdre for track marks. There are none. But Zach is on the landing, looking down, and sees everything. They freeze in tableau. (Well, one of them is dead, but the two living ones freeze.)

And so Zach is disgruntled. His mommy killed his mommy!

Yes: hot mommy-on-mommy killing action. There is one thing about "Desperate Housewives": It put women back on television -- even if, in this case, one of them is a baby-coveting murderer and the other is a junkie mess. "Sex and the City," the previous reigning ensemble chick show, wasnt actually about women, as it was clearly about gay men with vaginas. (Apart from sitcoms, not since "Melrose Place," it seems -- although one could argue for "Sisters" -- have women ruled in this fashion.) But theres nothing homosexual about Mary Alice & Co. -- theyre thin, pale shades of people, maybe, drifting in a green-lawned Hades -- but at least theyre women.

Or does he? Here are predictions for Season 2 early plot turns:

1. Brees husband, Rex, died, we are sort-of shown, believing hed been poisoned with potassium by Bree. But instead, let us imagine that the death is a scam concocted by Rex and his doctor. Fairly early in Season 2, after chasing Bree for a bit, theyll figure out its the pharmacist who screwed with Rexs potassium -- but not before we get at least three satisfying episodes of Marcia Cross as Bree eating a neighborhoods worth of scenery. Whoo! Let old crazy at it! Not since she snatched Jos baby on "Melrose Place" has Marcia really gotten to run amok.

2. Mike, Susans hot "plumber" boyfriend, who is also Dierdres former lover, and who spent this episode holding Zachs (adopted) father at gunpoint over the death of Dierdre, may in fact be Zachs father himself. Therell be a tense showdown in the premiere of the second season, in which Zach shoots Mike (Zach! I am your faaather!) -- probably in the shoulder or the thigh -- and then Mike is forced to reveal his Real True Self (hopefully while shirtless) to Susan, who will then go away for an episode and ponder whether she can really ever trust men, because, oh my god, wow, theyre all such, like, liars, you know? Which will be really boring, but manageable. (As long as Mike keeps his shirt off.)

At long last, the murderess Mary Alice narrates the end of the episode: "I not only watch, I cheer them on, these amazing women. I hope so much theyll find what theyre looking for. But I know not all of them will."

Mike pulls up to his house, where Susan cowers, and where Zach is waiting to shoot him.

"Sadly, thats just not the way life works," says Mary Alice. "Not everyone gets a happy ending."

Thoreaus quote about desperation continues, incidentally. He goes on to say: "A stereotyped but unconscious despair is concealed even under what are called the games and amusements of mankind."

"We were as happy as any family could be," as Mary Alice says.

The point being, of course, that our amusements contain evidence of our very real despair. The popularity of "Desperate Housewives," in fact, reeks of it.

Mike opens the door, and then he closes it.

Choire Sicha is the co-proprietor of TheAwl.com, and at work on a nonfiction book for HarperStudio.