The surprisingly strong fourth season of "24" ends with an anticlimactic "Pfffft!" -- but at least we got the panicked, unethical president we so richly deserve. 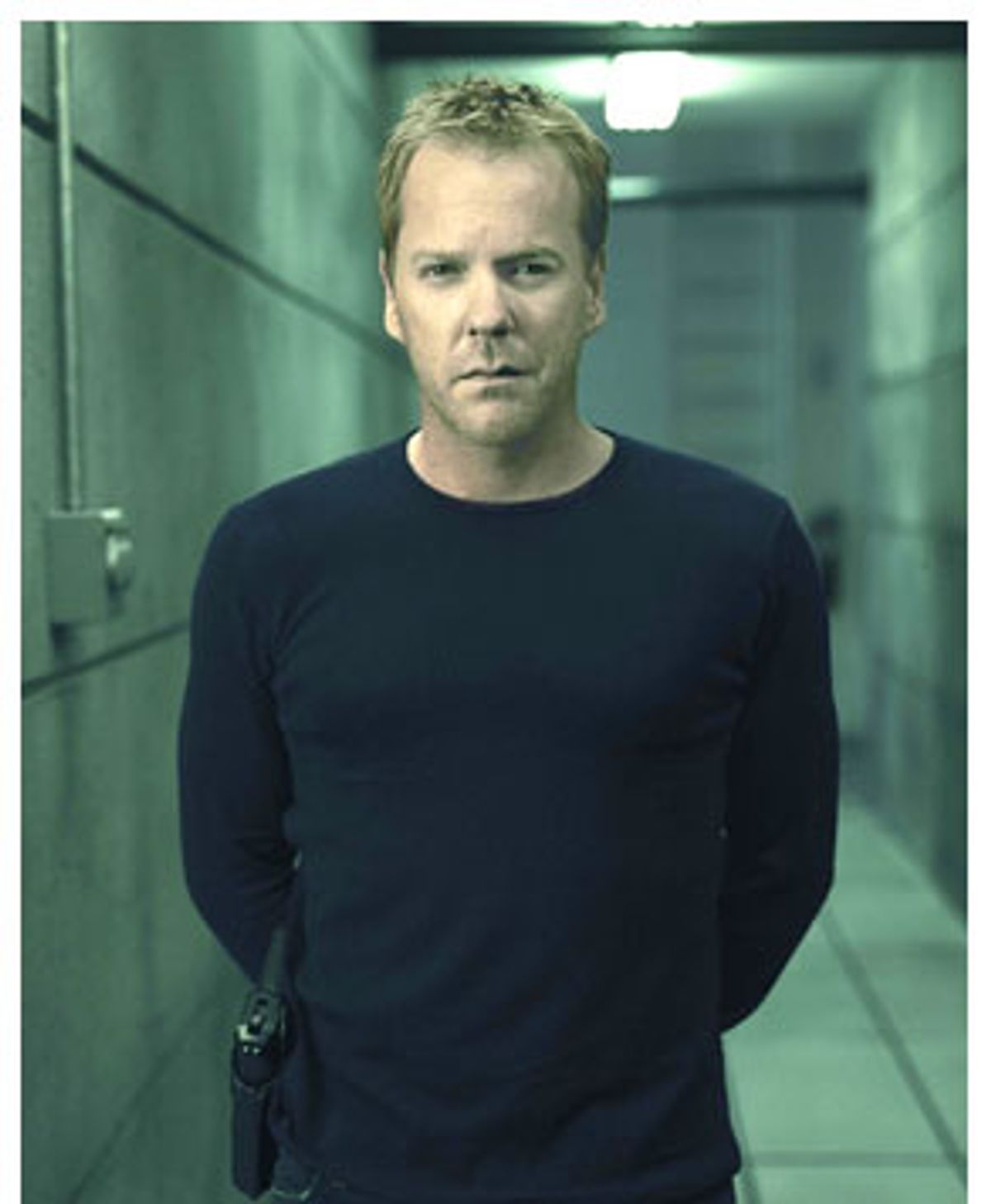 The fourth season of "24" ended with something less than a bang last night. After so many weeks spent worrying about what those sneaky terrorists were up to, it all came down to a few fighter pilots, racing across the sky above Los Angeles, and quickly blowing that nuclear missile out of the sky with an anticlimactic "Pfffft!" Even our weary heroes at CTU, after a day spent averting the biggest national disaster in history, only cheered halfheartedly when the missile was destroyed. Were they disappointed, too?

It felt like that time Dad got some illegal fireworks to set off on the Fourth of July, and even though at first you were afraid he might blow your head off by accident, once the fireworks actually went off, all you could think was, "Why didn't Dad get the good stuff?"

Not that there wasn't a lot of good stuff this season. Most notably:

1. Tony Almeida is reduced to a disillusioned shell of his former self, dating skeazy chicks, watching soccer, and drinking beer straight out of the can.

2. That terrorist "House of Sand and Fog" family implodes and  bonus! -- takes an innocent blond teenager down with them.

3. Finally, we have a president who panics, makes horrible decisions, blames others for failures, takes undue credit for victories, and sweats profusely -- just like the real McCoy!

4. Defense Secretary Heller's dirty, lying hippie son also turns out to be gay. In effect, his very gayness ends up being a threat to national security. (But then, whose doesn't?)

6. Jack gets dumped for the first time ever by lame Heidi Fleiss-look-alike girlfriend, rendering him Safe To Date by most women's standards.

Still, we were promised a lot this season, much of which didn't pay off. "No matter what the target is, there will be widespread panic," President Palmer told us during the first half of the finale. Ah, yes! Widespread panic, at last! Sweet, nourishing widespread panic, how we've missed you since the Great Orifice Bleed-Off of 2004! But mass hysteria was never to be, sadly, because too many Challenging Love Relationships had to be ironed out.

Many questions remained unanswered along the way: What was Marwan's master plan, or his motivation for all of this? How did so many terrorists work together without being discovered? Why did the bisexual assassin take time out to reapply her lipstick before she went next door to her neighbor's place? Was that included just because it was sexy?

In the end, it seemed like most of the writers' choices had more to do with quick gratification than with logic or any kind of increase in stakes. Give Erin Driscoll a crazy daughter, to make her more sympathetic! Bring Michelle Dessler and her former lover into the picture, and make Tony glower and pout over it! Attack Air Force One, then have some dirty desert hippies abscond with the top-secret security binder so the terrorists can't take it! By the time the finale rolled around, the season felt like an indistinguishable blur of torture scenes, standoffs in gloomy industrial spaces, and tense moments between former lovers/spouses/enemies.

Even during the finale, when Chloe discovers that the missile is headed for L.A., no one at CTU gets hysterical. And right before the missile is shot down, one Air Force pilot says to the other, "Good luck! Repeat, good luck!" Whatever the show's politics might be - and there's been no end to speculation on the matter, thanks in part to how we were reminded all season how sneaky and deceitful Arabs, Chinese, hippie protesters and gays are - at least the writers could take a little time out to make fun of the dorkiness of military culture as well. [Whoops! Looks like wishful thinking. On further inspection, the pilot in question is actually saying, of the target, "Good lock! Repeat, good lock!"]

Even so, you'd think that, at the very least, we could count on either Tony or Michelle to die this season, since they've been so in love and they didn't die last season despite threatening to do so endlessly. But no such luck! Instead we have to watch their painful reuniting scene, in which they give each other one of those heroic, body-slam hugs that tell us that tearful coital relations are impending. It's almost too much to bear.

"I love you. I didn't realize how much until I thought I lost you!" Michelle tells Tony, post-body-slam. Doesn't it seem like most of the dialogue of "24" could easily be generated by a computer program? Besides, I thought that, like most women, Michelle didn't realize how much she loved Tony until he put down the can of beer and got off the couch.

No time to speculate! We cut to Audrey and Jack, doing the awkward, cross-armed opposite of a body slam. Jack loves Audrey, who knows why. Come on, Jack! The woman does look just like Heidi Fleiss! No matter: He gets dumped. Heidi storms away, sniffling but already securing white hydrangeas for ex-husband Paul's funeral in her mind. You remember - he's the one who died because he saved Jack's life?

At least the writers are smart enough to recognize that Jack's life is the only one we really care about. And so, just when we think everything is fine - L.A. hasn't been flattened after all, which is nice since that bomb was, according to the map, right above my house - there's trouble afoot: The Chinese want Jack to pay for the death of their silly diplomat! The nerve of those uppity Chinese! And not only that, but one of President Logan's men has arranged to have Jack killed so that he doesn't leak any top-secret information to China. Man, can't we just relax and enjoy the fact that we haven't been blown to smithereens for a few seconds? It's as if the writers assume that we require constant suspense to stay interested.

Oh yeah, that's because we do. So Tony and Michelle and Chloe conspire to pretend Jack is dead, and after a quick phone call to David Palmer, Jack is forced to walk off alone, into the smog, his whole life turned upside down. He'll be a wanted man, living under a false identity -- just like Jason Bourne, except more depressed and pathetic. Will he go to IHOP or Crazy Girls first? It's anybody's guess, since pancakes and strippers are pretty much equally sexy.

Yes, it's all a little bit foolish, and it's basically impossible to make all that suspense pay off in the end. But then, the joy of "24" is in the suspense, and expecting it to lead to a deeply satisfying conclusion is like expecting "The Love Boat" to burst into flames and sink.

If "The Love Boat' ever does burst into flames, though, you can be sure that it will at least produce a great, big, thundering bang when it does.