The sinners next to "7th Heaven"

"Everwood" -- the family drama the Christian right hates -- wraps up on a passionate note. 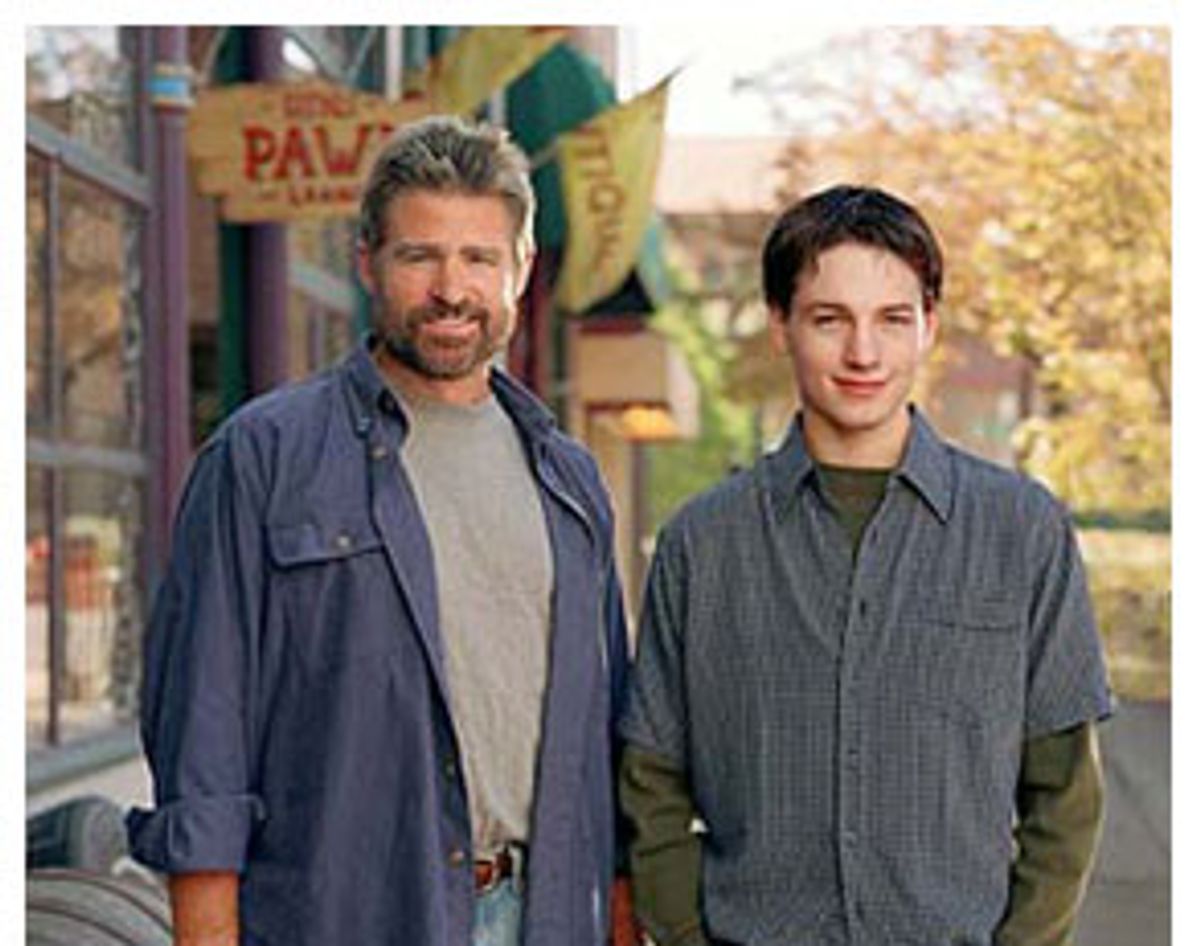 For three years, "Everwood" has been stuck in the crappiest time slot ever: 9 p.m. Monday, following the insipid, Parents Television Council-approved "7th Heaven." From "Everwood's" sappy theme music, cheesy credits and occasional voice-overs from a character referred to in my house only as the "sage black man," it would be perfectly reasonable to assume that the WB was just serving up some more family values schlock after the hour it devotes to the cultish Camdens.

But that assumption would be so, so wrong. Like "Buffy" before it, "Everwood," has the tremendous honor of being ranked the No. 1 worst show for families by the PTC (there's teen sex! And discussion of birth control! And the adults - they have sex too!) As far as family dramas go, "Everwood" is tops. In the wider scheme of broadcast television, "Everwood" is probably the best, smartest, most moving show you've never watched.

"Everwood" is centered on the Brown family -- dad Andy (Treat Williams), son Ephram (Gregory Smith) and younger daughter Delia (Vivian Cardone). They move to Everwood -- a very small town with one main drag nestled in the mountains of Colorado -- from New York City after Julia (Andy's wife and the kids' mother), is killed in a car accident. In New York, Andy's work as a world famously talented neurosurgeon had been his whole life, and flashbacks make it look like divorce was imminent for him and Julia. So, to get to know his kids and be the father he never was - to save his family -- Andy abandons his high-flying career and moves his surly, Astor Place-loving son and chipper, tomboy daughter to the middle of nowhere. Once there, the kids go to public school like everyone else, and Andy sets up a free practice to serve the people of Everwood. (His past life made him a very, very rich man.)

There are plenty of light moments on "Everwood" - and some particular sparklers on last night's finale -- but the thing this show has nailed is drama. The tension between Andy and Ephram, who will never quite forgive his father for his absenteeism, has risen and fallen over three seasons, but has never let up; any scene featuring the two of them could explode into a screaming match, or just as easily melt into a very sincere father/son embrace. Treat Williams plays such a good dad - somehow the man can express everything through his eyes, which smile and glare with equal precision. (Plus, he looks just right in all that outdoor dad gear - flannel shirts, not-stylish jeans, boots.)

And Gregory Smith . . . he's the perfect angsty but high-functioning teenager. I suspect that when the WB cast him three years ago, they expected Smith to grow into a real hottie. He hasn't, but it's all for the better. Smith's rather average, if darkly intriguing looks combined with his character's most compelling qualities (prodigious piano talent, maturity far beyond his years, quick tongue, general sophistication) make him more attractive and original than "The OC's" very yummy and smart-tongued Seth Cohen. And as Ephram's popular and surprisingly introspective schoolmate Amy Abbot (the stunning Emily Van Camp) has fallen ever so slowly and deeply in love with him this year, it's been believable. With Ephram, there's a there there, a kind of presence any teenage girl with half a brain would fall much harder for than she would for the captain of the lacrosse team.

"Everwood" has always walked a fine line between drama and melodrama, but it's never crossed over. It's true, there is a lot of death and dying and sickness on "Everwood" -- and some on the finale, too -- but it is a show, at least in part, about doctors, so what do you expect? In the first season, we watched Amy's beautiful boyfriend come out of a coma, lose his mind, and then die; neither Amy's dad, also a doctor, nor Andy Brown could save him. Later, we found out that Amy's aunt (and Andy's girlfriend), another doctor, had HIV. Ephram's girlfriend before Amy, Madison, got pregnant. At the end of this season, Amy's mother was diagnosed with cancer (though thanks to Andy's steady, talented hand at surgery, it looks like she might be OK). So when Amy, who just graduated, said to her father, as she did last night, that she "Pretty much had the worst high school experience ever," she wasn't kidding. Ephram would concur, and second the motion.

Yet, in the midst of all this heaviness and "issue" stuff - seriously, HIV, teen pregnancy, gay parents, antidepressant use, birth control -- there's lots of happiness, especially during last night's finale. Honestly, I expected that Amy's mom, Rose (Merilynn Gann), would die -- it's kind of a shock that she didn't. So, that was happy. More important: there was lots of kissing. Happy, make-out kissing. Although Ephram was missing -- he's off in Europe, trying to find himself -- it's a testament to the shows actors (and all the kissing) that I didn't even notice.

First, the little things that happened. Amy's dad, Dr. Harold Abbot (played by the crazily good Tom Amanades), prayed to God for, like, the first time ever, to save his wife during her cancer surgery. (I liked the fact that he specified that he wasn't promising anything in return for her survival.) Andy's neighbor and love interest Nina (Stephanie Niznik) found a bottle of her boyfriend's Percocet, and worried that he is a prescription drug addict. Amy decided not to go to Princeton, and stay home to help with her mom.

But for long time viewers of the show, these were trivial events. Two things, and two things only, mattered in the finale: The kiss shared by Bright and Hannah, and the kiss shared by Andy and Nina. Bright Abbot, short for Brighton, is Amy's charming, hapless, lost older brother. He's played by Chris Pratt, a young actor I'm surprised hasn't been swept up into the Seann William Scott/Ashton Kutcher club. Like those two, Pratt plays a devil and an angel all at once, and looks like both, too. On "Everwood," Bright couldn't keep a job after graduating high school (he didnt get in to college) because he kept screwing his female supervisors and breaking their hearts. (In one episode he goes from house to house to apologize to them.) But over the last few weeks, we've seen Bright falling - despite his efforts not to -- for Hannah (Sarah Drew), a smart, bookish (read: she wears glasses) friend of his sister's. Last night he finally worked up the courage to kiss her. "I don't know. . . we were hanging out and you got hot, and not in the take off your glasses kind of way," Bright told her. And it really was very sweet. Their kiss gave me chills.

With Andy and Nina -- it's big. The writers are laying a lot on the line by mixing it up with these two neighbors and best friends, and I hope that they can make it work rather than use their connection to spin out frivolous drama. If they are going to hook up -- Nina hasn't responded to Andy's confession of love yet, though she did look like she was into the kiss -- it's going to be a sticky transition, especially since Nina's boyfriend Jake ("Party of Five's" Scott Wolf) just moved in with her. (Although within five minutes it wasn't going so well.) As the camera panned out in the last scene to show Jake unloading yet another truck full of boxes, it was uncertain that they would even make it through the front door.

Who knows what will come after the summer break? I'll hazard only one guess: more sex. Hannah and Bright. Andy and Nina. Maybe even a reunion quickie between Ephram and Amy. That's enough to keep me watching, and hopefully it's enough to bring a few more into the fold -- not to mention piss off the Parents Television Council.