Ripped from my headlines!

"Law and Order: SVU" pulls details from my reporting for its gripping finale. So why is the "reporter" such an ink-stained wretch? 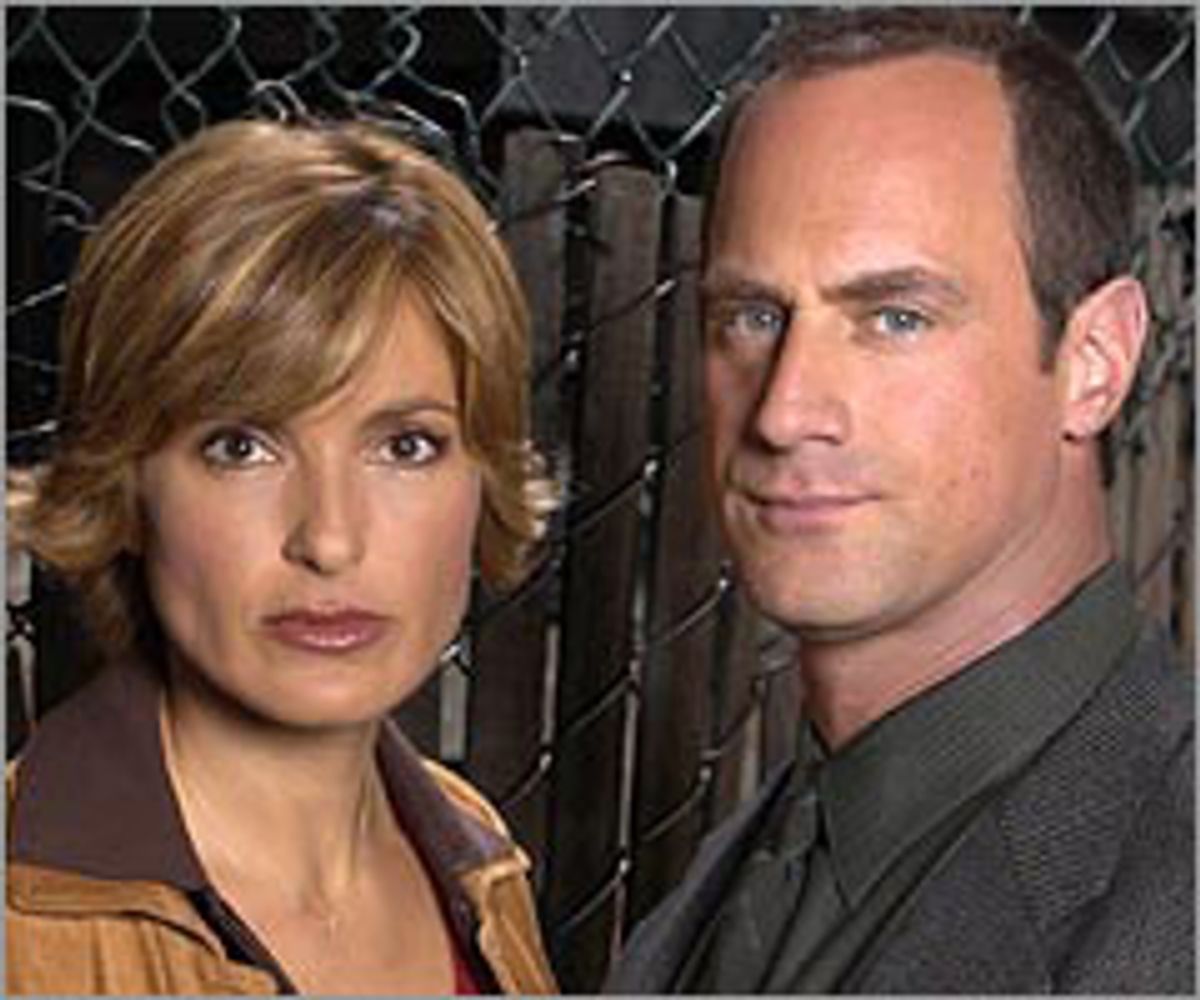 No, I did not get a dime. And no one from NBC even called to say how truly inspiring my work was, or how the truth really can be stranger than fiction -- or even that the damn episode existed. Instead, my dad saw a commercial for it on TV and sent me an e-mail.

In Tuesday night's season finale, two otherwise wholesome New York City police officers suddenly turn evil, beat up their wives -- one murders his wife -- then attempt suicide; one survives. Detectives Olivia Benson (Mariska Hargitay) and Elliot Stabler (Christopher Meloni) figure out that the two cops served in the same Army Reserve unit in Afghanistan and that a pattern of bizarre behavior began once they returned.

It turns out the Army gave these two cops a controversial anti-malaria drug the NBC attorneys decided to call "Quinium" that can make you go nuts long after you take the pills. (In addition to NBC's legal issues for fictionalizing the drug name, most anti-malarial pills are related to a class of drugs called quinolones, which are known to have psychological side effects. They are a man-made derivative of quinine, the age-old substance for fighting malaria from the cinchona tree.)

The wily detectives then figure out that a similarly weird kind of violence happened before, in the summer of 2002 at Fort Bragg, when Special Forces soldiers returned from Afghanistan and tragically murdered their wives and then killed themselves. Those soldiers, on TV, also took "Quinium."

What was really freaky (and most surprising) about the "Law and Order: SVU" episode is just how eerily close NBC got to what actually happened. In 2002, three Fort Bragg soldiers came back from Afghanistan, murdered their wives and killed themselves. I was a reporter at UPI, and my partner, Dan Olmsted, and I obtained 1,500 pages of internal drug company documents suggesting the possibility that a malaria drug being used in Afghanistan -- and one taken by all three Fort Bragg soldiers -- might be causing suicide, violent behavior and general madness. We jumped on a plane to Fort Bragg to begin what would become a three-year effort to gather string on the drug.

The drug we wrote about is called Lariam, or mefloquine. It was invented by the U.S. Army in the 1970s. It's great for preventing malaria, but it has some minor drawbacks, like causing psychosis, suicidal thoughts, depression and paranoia, which have been reported to last "long after" taking the pills, according to the FDA. There is some evidence that it may permanently damage the brain stem of some people who take it, though the drug manufacturer, Roche Pharmaceuticals, says it is safe and effective. Roche also says there is no credible scientific evidence showing that if you take Lariam you might do something crazy like kill yourself or somebody else.

That is what the makers of "Quinium" said on TV last night, as well. And that's not all. On "SVU," the standoff with police and the suicide attempt of one soldier-turned-police-officer on his front lawn closely matches the successful suicide of a Special Forces soldier on his front lawn in Colorado Springs, Colo., in March of 2004. The TV officer survives, and is later charged with cowardice, like the real-world Staff Sgt. Georg Pogany, whom the Army charged with cowardice, apparently for suffering a panic attack from the drug in October 2003. (The Army later dropped all charges.)

The side effects portrayed on TV were shockingly accurate: panic attacks, hallucinations, paranoia (one police officer is convinced his neighbors are tapping his phones). The violent attack by one police officer on his boss is really close to the sudden, uncontrollable rage described by folks who say they got sick from the real drug. He also describes dreams as bordering on hallucinations, of spiders coming out of his hands -- like a Peace Corps volunteer I once wrote about who hallucinated giant spiders on her bed. The cop describes hallucinating the gross distortion of faces, something Dan and I heard countless times.

On TV, the police officers call the day they took their weekly malaria pills in Afghanistan "Manic Mondays," because they would feel really nuts on those days as the drug began to build up in their bodies. Yup. That's what they call it.

In the story, the Army totally stonewalls Assistant District Attorney Casey Novak (Diane Neal). I think describing the Army's response to Dan and me as "stonewalling" might be too polite.

"SVU" cited studies by the drug company showing that probably one in 10,000 people goes nuts on the drug, but a British study puts that number at one in 140. That was ripped from the pages of some real scientific journals about Lariam, as well.

On TV, there is a military doctor who figures out that the drug is causing permanent brain stem damage. He later recants under what looks like extreme pressure from the Army, shattering Novak's case and letting the military get away with murder. He is the real coward. In real life, some soldiers have alleged the same thing about a Navy doctor, whom Dan wrote about.

The one thing I don't think Dan and I saw in our reporting was rape, but "SVU" had these police officers raping their wives. Maybe that was a contrivance necessary to put the case in the hands of the special victims unit.

And here is another really screwy contortion of the facts: The reporter in the episode is portrayed (at least initially) as a bottom-dwelling catfish, at best. We first see him in the episode picking through the trash! Stabler and Benson want to get the truth, but the ornery reporter from "The Sentinel" doesn't want to cooperate. He just wants his scoop. "Call me when you get a conscience," Stabler yells in anger.

OK. Do you know how many times I tried to get cops interested in this stuff? Can you possibly imagine how much a reporter would like to cooperate with a district attorney who wants to go through the Army's underwear drawers?

Later, the reporter has a change of heart. At least NBC notes that this particular ink-stained wretch was way, way ahead of the game and had it all figured out. But he hands all his electronic files over to the cops. No reporter would ever, ever do that. But the reporter's comment when he does it gave me chills: "Now go see how far the rabbit hole goes, as they say." Every investigative reporter wonders that about his story, every story -- if there's an end, and how far it can lead. In that fleeting moment, even the wretch seemed realistic.

At Fort Bragg in the summer of 2002, Dan and I documented a whole list of odd behaviors among the soldiers that seemed to mimic the known side effects of Lariam. The Army tried to say we were nuts. But we had other evidence, including thousands of pages of internal drug company documents showing Roche tracking violent and suicidal behavior among folks taking Lariam for over a decade. We would later do hundreds of interviews with Peace Corps volunteers and soldiers who said they had been horribly harmed by the drug. Soldiers say the drug has ravaged U.S. troops since the Somalia debacle in the early 1990s, the last time it was handed out en masse prior to the war on terrorism. In "Law and Order: SVU," the Army was well aware of that damage to troops.

Then in 2003, the Army started giving it to some units in Iraq. You may recall the Army also had a serious suicide problem among troops there in 2003, which has since disappeared -- the same time the Army stopped handing out Lariam. In fact, Dan and I showed that of the suicides in 2003, half of the dead soldiers came from units taking Lariam, contrary to what the Army's top doctor told Congress. Once the Army stopped dispensing Lariam in Iraq, the suicide rate dropped -- by half. The reporter portrayed on NBC last night rattled this off as a shocking statistic. We agree.

We also showed that the last six Special Forces soldiers who committed suicide -- a type of soldier rarely known to kill themselves -- had taken Lariam.

But there was one last leap of logic that TV could take, but we couldn't. The detectives decide at the end of "Law and Order: SVU" that the military is well aware of what the drug does to soldiers. That they have made a cold, hard cost-benefit analysis that it is worth the deaths of some soldiers -- and even their wives -- to prevent malaria. They think this drug is better than the alternatives and they don't care who it hurts and they will cover it up if they have to.

Dan and I never found any evidence that that was the case. We may never know. "But at the end of "Law and Order: SVU," the detectives worry about how many GIs might be ticking time bombs. We wonder, too.