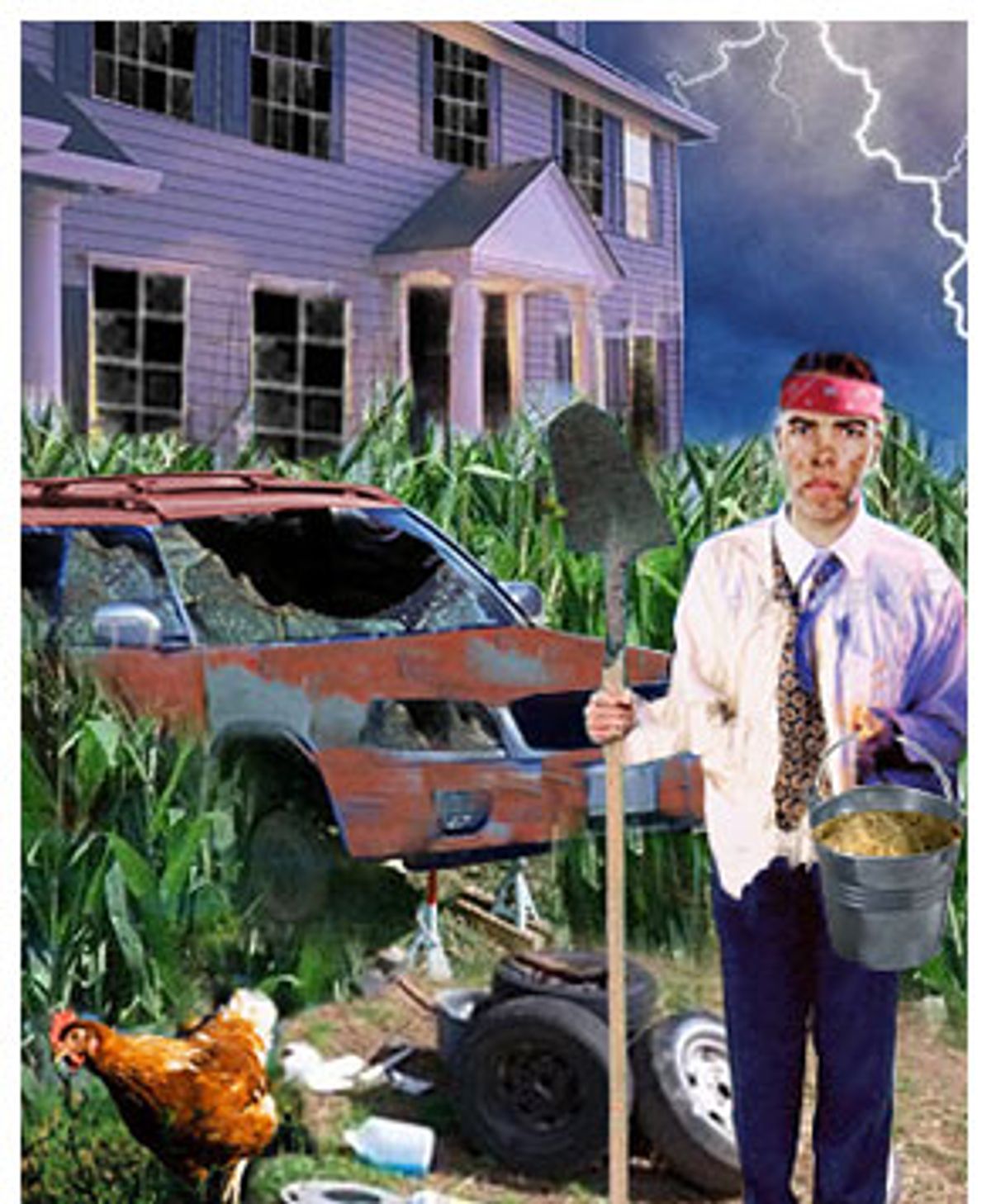 In his recent interview with Salon, "After the Oil Is Gone" author James Howard Kunstler, doomsayer of the oil age, disses alternative energy guru Amory Lovins, CEO of the Rocky Mountain Institute, for promoting the institute's ultralight Hypercar as a panacea for the coming oil crunch. After reading the interview, Lovins e-mailed Salon his response. We then gave both energy experts another chance to zap one another. The following exchange begins with Kunstler's comments from the interview.

James Howard Kunstler: I regard Lovins' Hypercar venture as a stupid distraction, if for no other reason that it tends to promote the idea that we can continue being a car-dependent society. Clearly we can't, no matter how good the gas mileage is. I'm not against efficient cars. I'm against the idea that somebody in Amory's position would focus on cars at the expense of something else like promoting walkable communities. The New Urbanist movement, for example, was campaigning for a much more intelligent response to suburbia at around the same time. And the solutions that they were promoting made a lot more sense than underwriting the continuation of the suburban fiasco. I think that this was perhaps an unintended consequence of Lovins' venture. It shows the limits of our imagination.

Amory Lovins: James Howard Kunstler criticizes me for supposedly suggesting superefficient cars at the expense of walkable neighborhoods. If he'll kindly look at my 1999 book "Natural Capitalism," he'll find that Chapter 2, "Hypercars and Neighborhoods," emphasizes the importance of both, and strongly supports New Urbanism. It suggests practical and profitable ways to build very efficient cars and not need to drive them much, so we can have communities worth living in and traveling to. I can't imagine why this approach should be deemed objectionable -- unless, of course, he simply didn't ascertain my actual views.

His claim that there is no practical alternative to current oil dependence, other than dramatic changes in settlement patterns and lifestyles, is also extensively rebutted in our peer-reviewed, independent study "Winning the Oil Endgame." If Mr. Kunstler thinks our study is wrong, he would do a public service by explaining how. Meanwhile, serious students of this subject may be forgiven for preferring our well-documented analysis to his qualitative contentions.

Kunstler: Amory Lovins claims his study, "Winning the Oil Endgame," was "peer-reviewed." This may mean little more than that his ideas were endorsed by friends and associates. I think that Mr. Lovins' intentions are good, but I stick by my assertion that his work on the Hypercar has been a waste of time and intellectual capital and has only led the public to believe that we can continue a car-dependent way of life. In Mr. Lovins chapter "Hypercars and Neighborhoods," he devotes 24 pages to the technical discussion of designing Hypercars and slightly less than two pages on the discussion of neighborhoods -- none of the latter including any technical discussions of civic (i.e., human habitat) design. I think this demonstrates pretty clearly that he is not paying attention to the right things.

I also stand by my assertion that we will not be able to run the Interstate Highway System, Disney World, the New Jersey suburbs, or any of the other furnishings and accessories of the American dream on any known alternatives to petroleum and its byproducts. For substantive argument, I recommend Chapter 4 ("Beyond Oil") in my book, "The Long Emergency." Finally, I find it ironic that the "green" headquarters of Mr. Lovins' Rocky Mountain Institute is located in the back country of Colorado, in a place that his 40-plus employees all have to drive to. It is, in effect, a hyper-suburban corporate campus masquerading as an environmentally sensitive and ecologically meaningful establishment.

1. Under RMI's policy of rigorous peer review, "Winning the Oil Endgame" was sent in draft, in whole or in part, for comment by 139 experts, chiefly in industry. A partial list is on Page 278, and other informants are acknowledged on Pages 279-280. The thoroughness and diversity of this review process, and the transparency of RMI's posting the book and all its technical backup free at www.oilendgame.com, have contributed, since its September 2004 release, to the absence of any substantive critique of its analytic content or logic -- as distinct from Mr. Kunstler's mere refutation by emphatic dismissal.

2. Those who read Chapter 2 of "Natural Capitalism," "Reinventing the Wheels: Hypercars and Neighborhoods," will find that it equally emphasizes and carefully integrates these two topics, though the car section's technical content makes it longer (17 pages vs. nine pages for settlement patterns and policies to reduce driving). Green real-estate development, a field RMI pioneered, is more fully described in Chapter 5, and there's an outstanding example of integrated urban planning in Chapter 14. Mr. Kunstler reinforces the impression that he hasn't read the arguments he's criticizing, let alone RMI's industry-standard text "Green Development: Integrating Ecology and Real Estate" and its accompanying CD of 200 case studies.

3. Calling RMI's main campus (at 7,100 feet in Old Snowmass, Colo.) "a hyper-suburban corporate campus masquerading as ... environmentally sensitive" seemed too bizarre to merit reply when David Owen, in the New Yorker (Oct. 2, 2004), said we'd promoted sprawl by not building in a city. But before this notion gains more currency by Mr. Kunstler's further embroidery, some facts should be noted.

RMI's main building is among the world's most energy-efficient, saving 99 percent of space- and water-heating energy, 90 percent of household electricity (the rest is solar-generated), and 50 percent of water, all with a 10-month payback in 1984. It has received more than 70,000 visitors and produced 28 indoor banana crops with no conventional heating system, down to -47 outdoors. Other RMI buildings also use solar micropower, exceptionally energy- and water-efficient appliances and fixtures, daylighting, superwindows and other sustainability-enhancing features.

RMI's organization-wide practices also include: On-site housing nearby (with high-speed wireless Internet) and bike parking for roughly half the staff and their families, with carpooling and free or discounted bus passes for the rest and a hybrid company car available to all employees; virtual and distributed offices (with similar car-displacing policies) linked by a high-speed virtual private network and Internet videoconferencing, which we also use worldwide to displace much travel; flextime, work-at-home, inclusive staff coordination, and community-building; buying 94 percent of electricity as certified-green, plus 100 percent solar-powered hosting of several Web sites; associate membership of the Chicago Climate Exchange, where we offset our small net carbon dioxide emissions, and of Climate Neutral Network; and comprehensive recycling.

Though RMI's practices doubtless can be further improved (suggestions are welcome), and are being continuously improved, I hope Mr. Kunstler will find these achievements consistent with the goals he espouses. It has never been true that all our staff must drive to work: Thanks to our nearby staff housing, many staff walk, bike or (in season) ski to work, or telecommute from home, and we encourage the rest to use our valley's outstanding bus system. One recent employee who lives up the hill wanted to hang-glide to work, though he couldn't flap hard enough to get back up. My own commute is about 10 yards across the banana jungle.

Facts are more mundane than fantasies, but a better basis for conclusions.