Wives of the Times

Who cares that with Maureen Dowd on book leave, the Op-Ed page of record has no female columnists? As long as male writers channel their spouses, we'll always know what women want! 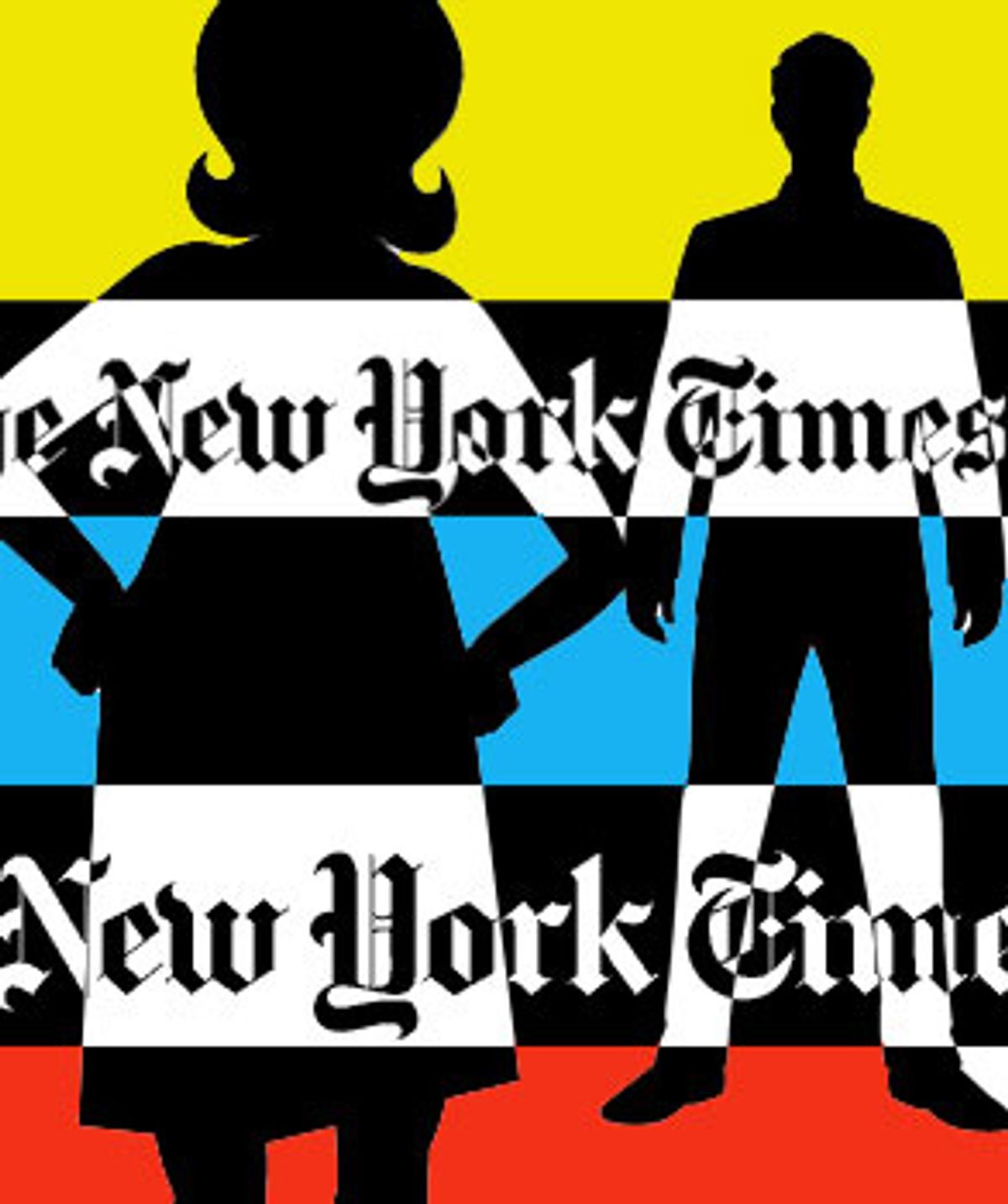 I am relieved to report it isn't a problem that the Op-Ed pages of major American newspapers, like the New York Times, have so few women columnists. Because the guys on the New York Times Op-Ed page know what women want. And when in doubt, they just ask their wives.

Since Susan Estrich picked a fight with the Los Angeles Times' Michael Kinsley, everyone from the Nation's Katha Pollitt to the Washington Monthly's Amy Sullivan and the New York Observer's Sheelah Kolhatkar have pondered the question why more women aren't bloviating with the boys on the nation's top Op-Ed pages.

Even though the New York Times editorial pages are now run by a woman, Gail Collins, the paper has zero women writing regularly on its Op-Ed page. The only woman columnist, Maureen Dowd, is on book leave, and her column just got bumped from its widely read Sunday slot to the Saturday doldrums.

But don't despair, ladies! This most certainly doesn't mean that women's issues are being forgotten or ignored on the Times Op-Ed page. Just this week, the paper's columnists have offered lots of insights about women's essential natures, needs, motivations and aspirations -- or womanly lack thereof. In John Tierney's column on Monday, we learned that companies run by women are less likely to be run into the ground. But there are some careers, like Wall Street trader, at which great numbers of women will simply never excel, because we're less competitive than men, and furthermore, we women "realize, better than men, that in life there's a lot more at stake than money."

Then on Wednesday, guest columnist Matt Miller, subbing for Dowd while she's on book leave, implored us to "Listen to My Wife," as he took a stand for improving work-life balance in the corporate world, even daring to call himself a -- get this -- feminist.

"Here's the deal: this isn't a 'women's' problem; it's a human problem," he wrote. "Yet for 30 years women have tried to crack this largely on their own, and one thing is clear: if the fight isn't joined by men (like me) who want a life, too, any solutions become 'women's' solutions." And we all know that that's a ghetto with no escape.

Miller concluded his plea on behalf of his wife, Jody, with a "Lysistrata" reference, which was good, because the only thing that gives a woman's opinion more oomph than having her husband give it for her is adding a light-hearted insinuation that she may withhold sex if she doesn't get her way.

Miller is hardly a pioneer on the Times Op-Ed page of the "take my wife" school of opinion. It's a whole genre unto itself, practiced by everyone from Paul Krugman, whose wife is an economist, to Nicholas Kristof, who tells us that his wife regards him as "marginally educated" because he never learned calculus.

But Thomas Friedman is the most ardent practitioner of the trope, turning his wife, Ann, a schoolteacher, into a running character in his columns. Over the years, we've learned lots of things about Ann: her favorite National Public Radio show is "Wait Wait Don't Tell Me," and her second favorite is "Whad'ya Know?" And she's been known to order pizza from California Pizza Kitchen for home delivery.

Ann's also weighed in on more serious matters. Through her husband, she has proposed that hybrid cars should get free parking everywhere in the United States. (We agree.) And, unlike Tom, she opposed the invasion of Iraq. In one column in 2000, she even divined the cultural implications of the Gore-Lieberman ticket in the Giant supermarket, by the way the bagger chose to sack her Roman Meal and challah bread -- together.

So we have a suggestion for the Times: If it's so hard to find women to write Op-Ed columns, the next time a columnist goes on leave, draft Ann. After all, her opinions on everything from foreign policy to pizza delivery are important enough for the paper of record -- at least when they're filtered through her husband.