Same as it ever was

George Lucas can sleep easy tonight. The FBI saved "Star Wars" from the evil rebels of the Internet file-sharing alliance. 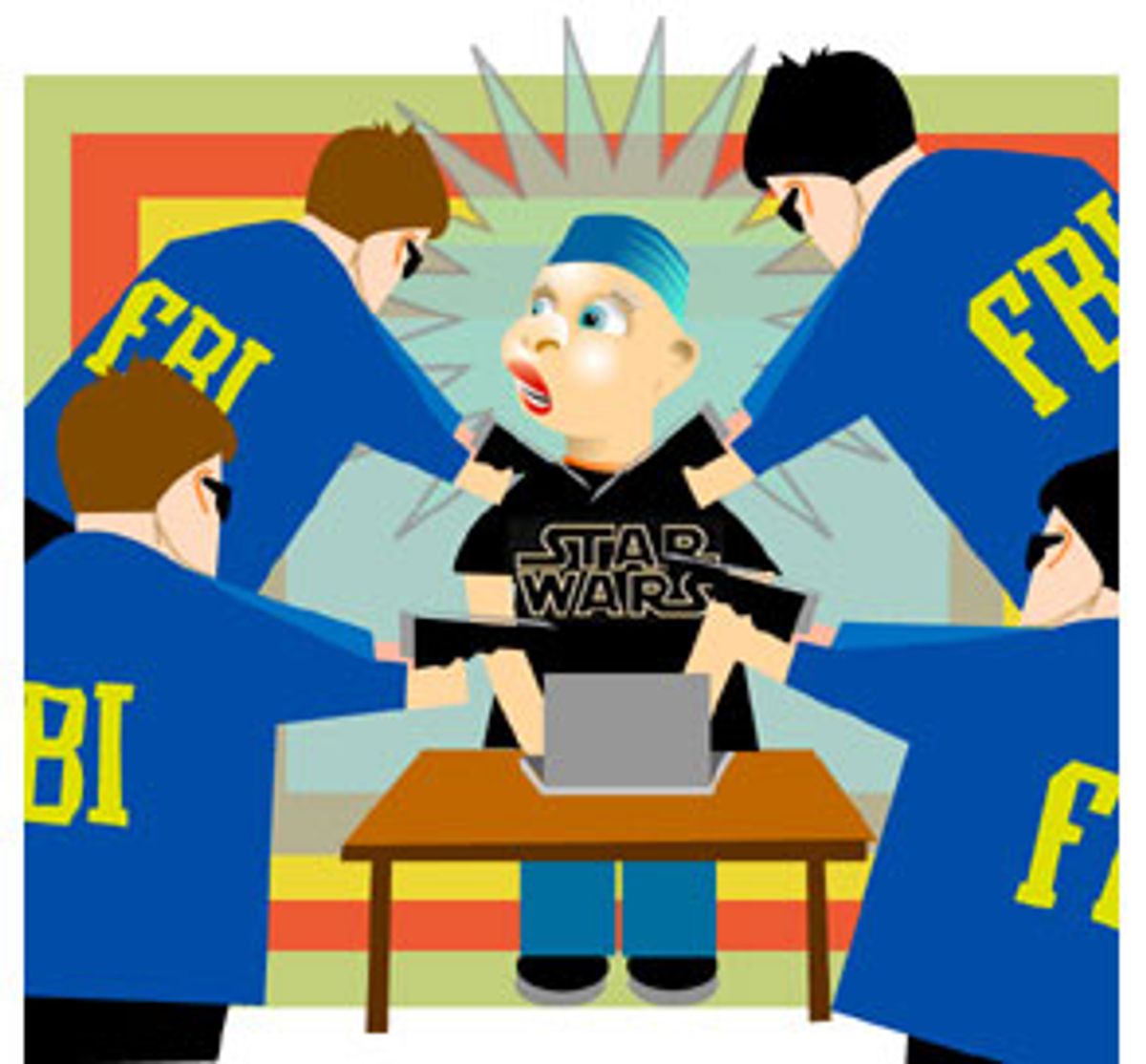 Haven't we seen this rerun before? A particular version of file-sharing software becomes popular. The entertainment industry starts paying attention. Lawsuits begin to fly. A few people get their fingers burned, and then we do it all over again. Napster, Kazaa, Grokster and now BitTorrent -- the names change but the story doesn't. The software will get better and the busts will get bigger. Same as it ever was.

The latest news in the file-sharing wars was delivered via a press release from the Department of Justice with all the solemn portentousness of an announcement that a major terrorist had been captured. "This morning, agents of the FBI and U.S. Immigration and Customs Enforcement (ICE) executed 10 search warrants across the United States against leading members of a technologically sophisticated P2P network known as Elite Torrents."

Ho-hum. It's not as if we didn't see this coming. Yesterday's big bust was inevitable from the moment the first geek gave BitTorrent a test drive, painlessly shared a huge file, and thought, wow, this works pretty well. BitTorrent is a fantastic way for Internet users to share the job of transferring huge files back and forth. But it's also a tool that, so far, has made little pretense at offering privacy. Those who upload and download files -- and given the way BitTorrent works, pretty much everyone who uses the service is doing both at the same time -- can be tracked. But naturally, every bust like yesterday's only encourages more programmers to try to figure out how to make it less easy to trace who's using the software.

What precisely prompted this most recent crackdown? Given the suspicious timing, it appears to be the horrifying news that "Star Wars: Revenge of the Sith" was being made available six hours before it started appearing in theaters, and that all told, some 10,000 copies were transferred before the authorities quashed the rebels. As of Tuesday, "Sith" had only raked in some $339 million worldwide, so something clearly had to be done. After all, "Internet pirates cost U.S. industry hundreds of billions of dollars in lost revenue every year from the illegal sale of copyrighted goods and new online file-sharing technologies make their job even easier," said Michael J. Garcia, Homeland Security assistant secretary for immigration and customs enforcement.

Hundreds of billions! Wow! It's amazing anything gets produced at all in Hollywood or Silicon Valley with those kind of losses! But hang on a sec. Come on. Please. The very idea that the people downloading "Star Wars" to watch on their computers might somehow be dissuaded from shelling out for the movie in theaters is so ludicrous that any movie studio executive who even hints at believing it should be locked up in a stockade and forced to watch nothing but Anakin Skywalker/Queen Padme love scenes in a permanent loop. OK, I confess, I don't have quantitative evidence to back this up, but I'll lay good odds that the Sith-stealing fanboys at EliteTorrents are the exact same people who will see the movie multiple times on the big screen, buy the DVD, own at least one light saber already, and otherwise will work all their lives to ensure that George Lucas' descendents live on easy street throughout the 22nd century.

Here's a news flash, folks. Call it the First Law of Piracy. The most popular albums, movies and TV shows are precisely the ones most likely to be shared on the Internet. It is a sign of success, not failure, that the demand for "Sith" was so high. And while we're at it, how about a Second Law: The First Law will be true for all time and there is nothing that entertainment industry executives can do about it, no matter how many lawyers they throw at the problem, no matter how many fines are assessed, no matter how annoying the digital rights management schemes they come up with, or how many times Congress and the judiciary kowtow to their bleating. Any phenomenon that hits big in the culture-at-large will be copied and shared online. Which leads us to the Third Law: This isn't about right or wrong, legality or illegality. It just is.

I'll tell you who the most bummed-out people are today, excluding those whose doors were knocked upon by FBI agents. It's not the would-be movie stealer, desperate to avoid paying $10 at the theater. It's the person who missed "American Idol" last night, or the season finale of "Lost," or the second part of a two-part "West Wing" rerun, and is now freaking out because he or she is terrified that plugging the words "Lost" and "BitTorrent" into Google will be laying out the welcome carpet for a posse of federal officers.

It should go without saying that these are the same people who'd likely be happy to cough up a few bucks if they had the ability to head over to some iTunes-like service and dial up the show they missed. If iTunes has proven anything, it is that the existence of widespread piracy points directly at a marketing opportunity. Where there is desire, there is money to be made.

Well, to all those bummed-out TV fans, all I can say is, have patience. Your day will come. Soon. Our future will be one in which everything we want will be available to us at a low enough price to seem worth paying. Because that's the only way the entertainment industry is going to survive.

This may mean that there is less money to be made overall by the big studios and the mega movie stars and the platinum pop artists. Tough noogies. Average real wages are falling in the United States, most likely as a result of intense global competition. Share the pain, folks! The same factors that make it possible for an Indian programmer in Bangalore to compete with one in Silicon Valley -- the Internet, high-bandwidth telecom lines, the easy ability to share digital information -- make it possible for entertainment consumers to gain access to whatever pleases them, quickly, cheaply and unstoppably.

It's that kind of world now. And the most stupefying part of it all is that with every bust, the entertainment industry makes it less and less likely that it will have the upper hand in how it all plays out. I asked Cory Doctorow, an up-and-coming science fiction writer who has pondered and predicted the impact of file sharing as much as anyone on the planet, how he was reacting to the most recent news. Here is his response, in full:

"The long-term solution to file-sharing must be a negotiated peace with peer-to-peer (P2P) services. ITunes is nice, but it is dwarfed by Kazaa and Grokster, et al, and it lives alongside of these services, without cannibalizing their users (in the same way that Evian co-exists with tap-water without hurting tap-water consumption).

"A P2P peace would collect money from file-sharers and disburse it to artists, based on what is being shared. The original Napster was perfect for this task, since every download went through a central server. But the studios sued Napster out of existence.

"Each successive generation of P2P since has placed a greater emphasis on attack-resistance and anonymity. The music and movie industry ultimately require a trackable, countable P2P-verse. But their lawsuits are breeding just the reverse.

"The lawsuits against BitTorrent Web sites will beget trackerless versions of BitTorrent, already in production. These are the antibiotic-resistant bacteria of P2P: the outcome of heavyhanded, ill-advised attacks on the most popular technology ever.

"There isn't any quantity of lawsuits that will convince users to give up P2P. But if the studios keep it up, they will permanently alienate their customers and drive them to seek out successively less controllable versions of P2P systems.