Tale of the tape

Let us now praise the mix tape, a fuzzy-sounding byproduct of hours of misplaced energy and a pure enthusiasm for music. 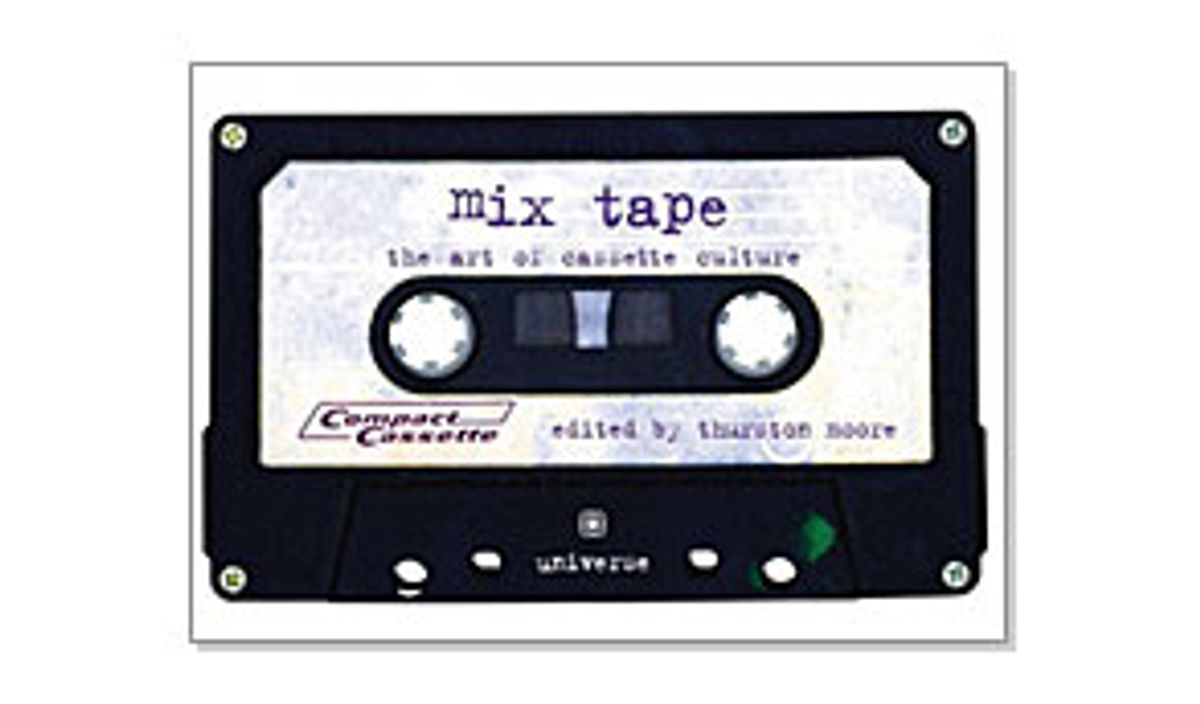 The stories are endless. There is the guy who in college used the same mix tape to impress three different girls -- his girlfriend, a fling and a prospective second fling -- simultaneously and got away with it. There is the 13-year-old whose musical existence was shaken out of a Sex Pistols-Beatles bipolarity by mix tapes from cooler, older friends. There is the guy who made a romantic tape called "You Best Believe I'm in Love" with nothing on it but New York Dolls songs.

In retrospect, the era of the mix tape -- which began not long after Philips unveiled the audiocassette in 1963, crescendoed throughout the '80s and probably peaked in the early '90s -- looks like a vast, unintentional folk art movement. Nearly every music-loving teenager in the country participated. Think of it this way: If every kid who spent a Saturday afternoon making a mix tape over the past 25 years had instead spent that time painting, sculpting or writing poetry, the '80s and '90s would be known as a period of unbridled renaissance in American outsider art. Now that era is over, the hours of tape-deck labor replaced by the drop-and-click production of the iPod playlist.

At least that's the sense one gets from "Mix Tape: The Art of Cassette Culture." Edited by Sonic Youth frontman Thurston Moore, "Mix Tape" claims to be the first book wholly devoted to mix-tape culture. "Not only is [the era of the mix tape] over, but there are so many people who don't even know what it is," Moore said in a long phone interview. "Think of people born in the '80s."

He may be right. I was last given a mix tape maybe five years ago. Every mix I've made or received since then has been on CD, which, depending on whom you ask, is either completely different or exactly the same thing.

"Mix-tape culture" is a simple but sprawling subject.

"I have so many mix-tape stories it's hard to know where to begin," writes the filmmaker Allison Anders in "Mix Tape." So do a lot of people. That's why Moore decided to make the book a relationship study rather than an academic exploration of mix-tape culture. His approach was simple. "Basically the book was me just sort of filling in my email address book, and asking everybody: Do you still have any mix tapes around?" he says.

The result is a parade of mix-tape anecdotes from 80-plus alpha hipsters -- noise rockers, punk artists, radical feminist writers, avant-garde video artists and the like. "I didn't want it to be a 'celebrities and their cats' kind of book," Moore says, "which it easily could have been. I could have gone after, like, Sofia Coppola, people that I am somewhat friendly with and who have high profiles in Hollywood. But I didn't want to go that route with it."

What do the mix tapes of the super-hip sound like? The mixes range from the arty-eclectic (Sonic Youth guitarist Lee Renaldo made a mix for his wife, the artist Leah Singer, that juxtaposes Nick Cave and Buddy Holly with dialogue from Godard's "Une Femme est une femme"), to the subversive (the album-jacket artist Pushead's tapes are -- what else? -- barrages of early '80s punk) to the ironic-redneck (Ahmet Zappa's '80s cock-rock mix comes with the following warning: "Sensitive pussies should not listen to this awesome set of ditties. This mix is filled with the power of rock and is fueled by Satan himself"). Designer Kate Spade's entry is by far the most mainstream. Like your older sister, in high school she would drive around and smoke cigarettes to a soundtrack of David Bowie's "Changes," Fleetwood Mac's "Landslide" and Simon and Garfunkel's "The Sound of Silence."

All these tapes, whether compilations of avant-punk or classic rock standards, have a common purpose: to communicate an emotion or idea -- to a new friend, a potential lover, or even to oneself. The mix tape, Moore says, is "sort of a safe-sex thing: It's sharing music instead of sharing germs." The romance comes not only from the emotion expressed by a series of songs, but also from the sheer effort that it takes to plan and execute a mix. "The time spent implies an emotional connection with the recipient," writes Dean Wareham of Luna. "It might be a desire to go to bed, or to share ideas. The message of the tape might be: I love you. I think about you all the time. Listen to how I feel about you. Or, maybe: I love me. I am a tasteful person who listens to tasty things. This tape tells you all about me."

"Mix tapes are like matchmaker forms," Moore writes. For budding couples they can test compatibility. Welcome to my world, the mix tape says. If you end up sleeping over on a regular basis, this is the music you'll have to listen to. Why don't you make me a tape, too, so I know you're not into Simply Red? Phrased negatively, making a mix tape for someone other than your girlfriend is a form of cheating. In the film version of Nick Hornby's book "High Fidelity," probably the mix tape's cultural zenith, John Cusack's character, Rob Gordon, nearly wrecks a relationship by making a mix for another girl. He might as well have been caught with panties in his messenger bag. It doesn't matter that he never gets further than flirting. Making a mix tape for another girl is only a notch below actual infidelity.

For rock snobs like the fictional Rob Gordon and record-store geeks everywhere, the mix tape has an additional purpose: to brainwash someone, to alter their musical taste. Like most people, I would imagine, I got my biggest share of these in college, when I had indie-rocker friends with enough spare time to make me grungy compilations of abrasive screamo, the covers scrawled with obscure, vulgar band names and bizarre symbols. I was brainwashed into an affection for Robyn Hitchcock by an indoctrination tape that my friends and I repeatedly stole from one another over the years, a tape I still have in my desk drawer.

In a way, "Mix Tape" is a book-length elegy that rests on the idea that the mix tape can exist only on the black-and-gold Maxell. The mix CD, now standard fare at wedding receptions and in my Brooklyn neighborhood's hipper jukeboxes, doesn't have the same allure. "In the future, when social scientists study the mix tape phenomenon, they will conclude -- in fancy language -- that the mix tape was a form of 'speech' particular to the late 20th century, soon replaced by the 'play list,'" writes Dean Wareham. That the book was published at all argues that the era of the mix tape is over. If it weren't, then why put out a book about it?

This kind of cassette fetishism is part nostalgia and part technical snobbery. For Moore, only analog tape can please what he calls the "ear-heart." Digital technology "doesn't have the physicality of analog tape -- the friction on the head like that," he says.

But does format really matter? Some say a digital mix isn't as special because it doesn't carry the weight of hours of labor that a well-done mix cassette does. With a laptop, there's no mapping out the ebb and flow of your song list to make sure you don't run out of tape in the middle of the last song. Digital technology, detractors say, is too slick, too easy. But even Moore, a self-professed cassette junkie who still uses cheap tape decks onstage, admits that the mix CD is an acceptable successor.

"Maybe it doesn't take the same amount of physical effort," he says, "but that's not the point. I think it takes the same amount of psychological effort, or romantic effort." Indeed, the true challenge of the mix tape -- selecting the right music and arranging it in a thoughtful manner -- is at least as tricky and probably even more difficult with a laptop and CD burner as it was with a boom box. In both cases, the mix is governed by the same compositional considerations: You need a narrative structure, an internal logic, a strong opening, an appropriate and preferably surprising ending.

The challenge these days is that with a world of file sharing at your fingertips, the choices are endless. Time was you only had your own record collection to choose from when making a mix tape. Now you have millions of people's MP3 collections -- truly millions, possibly billions, of songs to choose from, not to mention snippets from movies, jingles, bits of famous speeches or bits of "dialogue" from the Paris Hilton video. It can all be a bit paralyzing. In the age of file-sharing communities such as Soulseek, making a mix CD is like trying to make a professional-grade audio collage -- your own personal Beck album.

All this raises the question: Is the mix tape really an art form? Literary critic Matias Viegener, writing in "Mix Tape," offers the most convincing case that it is. "The mix tape is a list of quotations, a poetic form, in fact: The cento is a poem made up of lines pulled from other poems," he argues. There are differences, of course. You can't perform a formalist analysis on a mix tape; unlike with, say, a poem, not every word is there intentionally. In fact, one of the most vexing problems the mix maker faces is that rarely does an entire song express what you're trying to say; most often you choose a song because of one particular element -- a chorus, a verse or a mood -- but another part of the song often betrays you. Still, the mix taper faces the same choices as the writer: what to include, what to exclude, where to start, where to end, what to emphasize and what to hide between the lines.

Besides, for a large part of an entire generation, a good mix tape carries more emotion and potential for transport than any book, film or individual song. People never tire of mix tapes. They keep them until they lose them; they never throw them out. Instead, they wear them out or spill bong water all over them and still refuse to get rid of them, despite the urgings of girlfriends, boyfriends, fiancées, wives and husbands. No matter what kind of satellite-linked, GPS-enabled iPod mutation kids of the future will carry, a good number of them will still grow up and fall in and out of love to the sound of the mix, however it's delivered.

But clearly there is something special about the mix tape, a physicality that digital technology can't replicate, something significant enough that Moore was able to fill a book just by e-mailing everyone in his Rolodex. The difference between analog and digital mixes isn't as dramatic as cassette junkies would argue. But the difference is real enough that when someone puts together "Playlist: The Art of iPod Culture," those of us who came of age in the '80s and '90s probably won't be reading.

Seth Fletcher is an editorial assistant at Men's Journal.