Rodney Rothman burned out on life in Los Angeles and retired to Florida at 28 -- only to discover that permanent vacation isn't all it's cracked up to be. 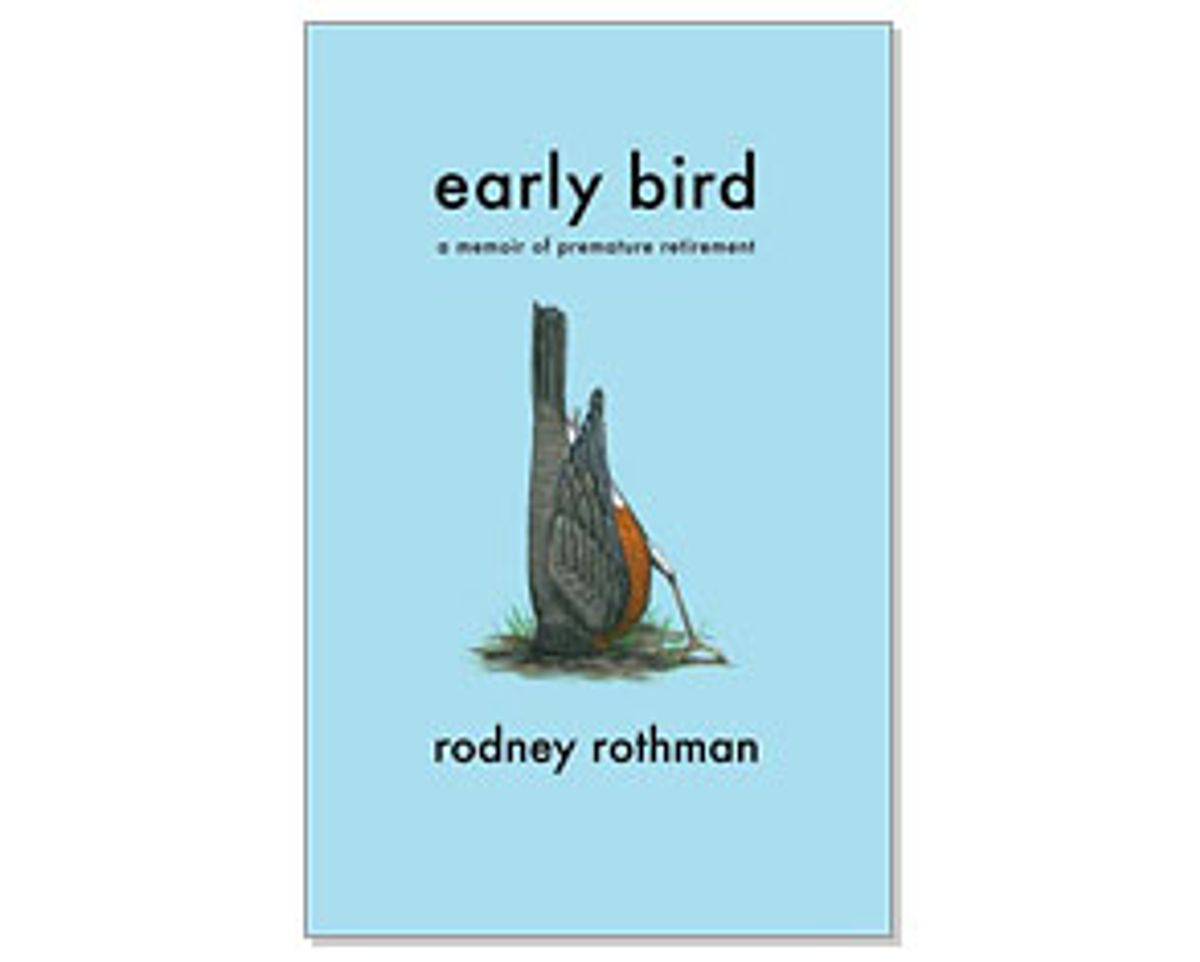 Retirement, one often suspects, is wasted on the old. The lives we imagine we'd want to lead when the work we're doing now has finally been done -- lives of world travel, of furious artistic endeavor, or perhaps of hedonistic sexual abandon -- are not ultimately compatible with the asperities, both physical and psychological, of advanced age. Instead, as the decades pile on, time pushes you away from the life you've dreamed of eventually living, and retirement, as it's currently popularly practiced, looks less like the point of it all than like the premature end. It's death's waiting room, which would be bad enough, except that the pay's also lousy, there are irritating old people everywhere, and it takes place, for the most part, in the humid hinterland of South Florida.

This isn't, mind you, just a stereotype of retired life. It's the report of a recent expedition to the land of retirees, a one-man scouting party whose mission it was to assess this last station of modern existence. Our scout is Rodney Rothman, a 28-year-old former head writer for David Letterman (and author of the slightly made-up "My Fake Job" article in the New Yorker) who decided, more or less on a whim, to move to Florida just to see what retired life was like. In "Early Bird," Rothman's funny chronicle of the half-year he spent living in a retirement community in Boca Raton, he explains his thinking this way: "'I'm Jewish,' I say to myself one day. 'I'll end up retired in Florida anyway. Why not get a head start and check it out?'"

What Rothman finds in Florida is pretty much what you'd expect. When they're not talking about their sexual conquests, retired old men play tennis and shuffleboard, while retired women's days are filled with canasta, bingo and scandalous gossip by the side of the pool. Despite appearances, old age, Rothman discovers, does not fundamentally change people. If you're nice when you're young you stay nice when you're old, while if you're an asshole at 25, you remain an asshole at 75. This fact -- in addition to some health tips he cribs from books like "Successful Aging" ("With lack of stimulation comes a subtle but serious reduction in mental functioning," the book warns ominously of a sedentary retirement) -- is about the most profound thing Rothman seems to learn during his foray. If the thought of growing old enough for society to excuse you from working full-time has never held much appeal for you, and if spending your final years among others who've also stopped working sounds a bit sad and lonely, Rothman tells you you're right. The retired life is nothing to look forward to.

For its obviousness, Rothman's account is also at least charming, and sometimes hilarious. There's a humorous exploration, for instance, of the waning popularity of shuffleboard, a sport -- Rothman learns never to call it a "game" -- that has lately been superseded in the senior culture by tennis, which, because it's physically taxing, is thought to be hip. While he's in Boca, Rothman attempts to shine up shuffleboard's P.R.; he imagines himself "the future of the sport," shuffleboard's Tiger Woods, and he draws up clever pro-shuffleboard fliers to get people to play: "Come Catch Shuffleboard Fever! (Shuffleboard Fever May Not be Covered by Medicare.)" But Rothman turns out to be a lousy shuffleboard player, and the fliers don't take. Indeed, we learn, the failure of shuffleboard is actually a symptom of a larger trend in senior life -- the battle between the long-retired, whom Rothman calls the "old-old," and their children, the newly retired "young-old," who rebel against the retirement pastimes of their parents' generation.

I'd like to have learned more about this rift between the old-old and the young-old, as it sounds fascinating, but Rothman mentions it only in passing. Indeed much that's fascinating in this slim book is mentioned only in passing, and topics that would have been more rigorously covered by a more able writer are short-changed by Rothman in the service of small, sometimes cheap jokes. I'm not saying Rothman should have written a serious treatise on the situation of seniors today; plainly, and thankfully, that wasn't his aim. But it's hard to read Rothman and not think of writers like David Sedaris, Sarah Vowell and Dave Eggers, writers who render hilarious fish-out-of-water personal accounts with more depth, and more ilan, than Rothman does.

The biggest hole is Rothman's apparent unwillingness to tell us much about himself. What we learn about our hero is mostly surface detail; he explains his shuffleboard difficulties, he discusses his women trouble, and he confesses his inability to masturbate while being observed by a painting of Jesus. ("Is it because he's Jesus," a friend asks, "or just because there's another guy in the room?") What we never quite learn, though, is what Rothman is doing in Florida in the first place. Why, after he lost his job in TV (a show Rothman had been working on was canceled), did he choose, of all things, to go live among retirees? Was it only to write a book? Was there something else animating Rothman's decision? There's some evidence that Rothman, like many of us, is quite scared of getting old, and that this may have had something to do with his decision -- but alas, he fails to really explore the idea.

Almost every retired person Rothman meets is described in the same way -- as a sketch of collected eccentricities lacking much depth. Everyone here's an oddball; they're all like that old uncle of yours whose behavior you excuse because, well, he's old. Many of them, I should say, are pretty funny. There's a 93-year-old former stand-up comedian who often laments her physical decline yet is satisfied that "my legs still spread." Or there's Vivian, a sexpot senior with whom Rothman dances one night and who causes Rothman to admit of the experience, "At some point, I become aware that I have an erection."

What these people reminded me of, mostly, was TV. They're thin characters, but they say predictably funny things and find themselves in some funny tangles; the entire scenario -- young man goes to live with old people -- sounds like an instant sitcom. It's fitting, then, that Rothman has turned his book into a TV pilot. NBC is reportedly deciding whether to commit to the idea. So maybe Rothman's decision to move to Florida doesn't look like such a mystery after all.